Twister: Sex in a Box

How many times have you wanted to talk to a cute guy or girl at a party, but you were too self-conscious?  Or you talked to them, but they didn't respond.  Or maybe you liked each other, but you couldn't show it, because you were supposed to like the "opposite sex."

That's the whole point of the game "Twister."

It was introduced by Milton Bradley in 1966 as a "wild party game" for heterosexual grown-ups, but teens soon became the primary audience.

You play on a large plastic mat covered with red, blue, yellow, and green circles.  The leader spins, and then announces "Left foot -- green", "Right hand -- yellow", and so on.  Players (up to 4) try to place the proper appendage on the proper circle.  If they can't, or if they fall down, they are out of the game.  The last player standing wins. 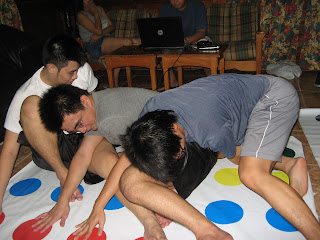 You might expect that, as players squirm and twist to hit the proper circles, intimate body parts would be pressed together, and in fact the game's critics called it "Sex in a Box."  But the mechanics of body placement really gives you about the same amount of intimate contact you would get in a wrestling match, or an extended hug.

But you do get that hug!


Teenage boys in the 1970s were forbidden touching, except for  brief, stylized handshakes and the aggressive contact of sports matches.  If they touched by accident, they were expected to jump back and feverishly brush off invisible contaminants, too disgusted for words.  So having license to touch at all was liberating.


It was no fun in mixed-sex groups, but you could often convince sleepover buddies to play.  It would have been even more fun in swimsuits at the beach, but that was hard to arrange in the Midwest, 2000 miles from the nearest ocean.