The Gay Connection of Celtic Gods

When I was a kid in the 1960s, the Celtic world was everywhere.  Mr. Bass in The Wonderful Flight to the Mushroom Planet was from Aberstywyth, Wales,  Rich and Sean exchanged a look that meant something in rural Ireland, and if you liked Kipling's Jungle Book, librarians nudged you toward Puck of Pook's Hill.  There was a Celtic Festival every year where you could see guys in kilts and play homoerotic "feat of strength" games.

But was there any gay symbolism?  Any suggestions that the Celtic world might be a "good place"? 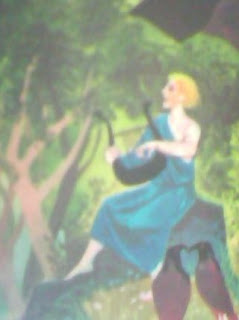 In Hero Tales from Many Lands (Alice Hazletine, 1964),  I read of a boy who had lost his memory.  Wandering aimlessly through the thick woods of Wales, he encounters a bard, blond with a blue robe, stunning beautiful, singing a song that brought both joy and pain.

They travel together, until finally the wanderer gives his life for the bard.  Then he remembers: he is Manawyddan, God of the Ocean, and the bard is his fellow god Pryderi in disguise.  His quest required him to sacrifice himself for a friend (and the amnesia was necessary, lest he remember that he was immortal).

The source was The Book of the Three Dragons, by Kenneth Morris (1930), which recounts many adventures of the Manawyddan and Pryderi.  Both marry women, but their love for each other is strong enough to save the world.

By the way, when the magician Gwydion and his brother Gilvaethy stole Pryderi's pigs, the High God Math turned them into various animal pairs (boars, deer, wolves).  At the end of each year, they brought him an animal sacrifice, and he turned it into a beautiful boy. A same-sex couple having children! 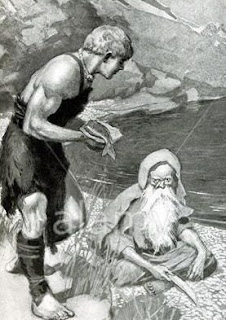 Finn MacCool in Irish myth was a rough, muscular boy who accidentally tasted the Salmon of Knowledge, and became super-intelligent.  He liked women -- the famous Pursuit of Diarmuid has him chasing the woman he likes and her male lover all over Ireland -- but he also led a band of warriors, the Fenians, who were devoted to him and to each other.  During the 19th and 20th centuries, several Irish nationalist groups called themselves the Fenians. 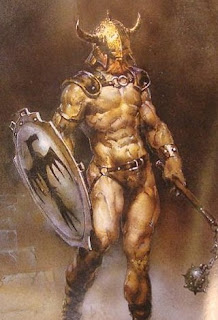 And Cuchulain, who single-handedly defeated the army of Ulster at age 17, depicted here as a muscular Conan-style barbarian: he was so beautiful that everyone who saw him desired him.  The sagas mention both male and female lovers.  For instance, Ferdia:

Fast Friend, forest companions,
we made one bed and slept one sleep
In foreign lands after the fray.
Scathach's pupils, two together. 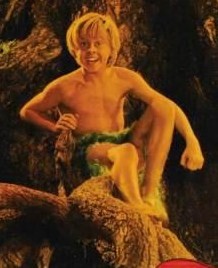 But the most evocative of all the Celtic gods and demigods was Puck the trickster.  He appears in Shakespeare's Midsummer Night's Dream to procure a catamite for King Oberon and to mock and befuddle heterosexual loves.  Nearly every teen idol has played him at one time or another: Danny Pintauro, Will Rothhaar, Eli Marienthal, even Mickey Rooney (left).