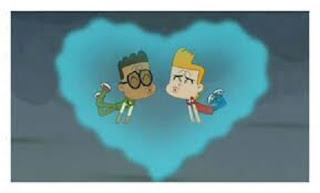 And you thought this was a golden age of gay representation in children's cartoons, with gay characters (both kid and adult), open same-sex crushes, same-sex pairs dancing at parties, and minimal "girl walking in slow motion across the schoolyard" heterosexual brainwashing.

Looped, on Amazon Prime, is a Canadian cartoon series about two middle-school boys trapped in a time loop, reliving the same Monday over and over.  No explanation of how they got in the time loop, no attempt to escape, even though their parents are absent (endlessly out of town), they will neve experience Christmas, summertime, or puberty, and they have to take the same classes ove and over.  For over four years!

Instead of going crazy, the mischievous Luc (Lyon Smith) and the responsible Theo (Kevin Duhaney) make the best of their situation by thinking of new ways to have fun, get even with their enemies, and impress The Girl.

That's right, Theo and Luc are both interested in girls.

No characters identified as gay, bi, trans, nonbinary, ace, or anything other than cisgender heterosexual.

In the first episode, the boys' arch-nemesis controls their bodies and forces them to kiss.  They struggle desperately, writhing in terror, before the kiss happens.

Off camera.  Apparently the animator thought that seeing boys kiss would corrupt the kids in the audience.

We don't see it, but the kids in the schoolyard do, and react with blatant disgust.  Boys kissing!  Gross!