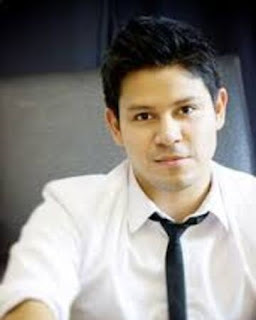 Two Sentence Horror Stories is a horror anthology on Netflix (each episode is actually about 20 minutes long).  The icon is so extremely disgusting that I've been staying away, but I'm running out of things to watch, so, I went through the plot synopses to find one that might have some LGBT representation.

I came up with "Elliott,:"  about a trans boy (James Goldman) who gets stared at and misnamed a lot,, and the principal forbids him from using the boys' restroom: "you either got the equipment or you don't."

At least the music teacher (Edwin Perez) is nice to him. 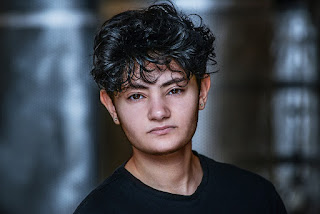 James Goldman was playing girls prior to 2017, so I'm guessing he's transgender in real life.

In search of a restroom that doesn't have a transphobe standing guard, he goes through an "access forbidden" door and down a scary staircase to an abandoned corridor.  A scary shadowy being with glowing eyes appears....

Whoops,  just a friendly androgynous janitor, I;m guessing a masculine-presenting woman.  They eat pistachios and bond.  She says that lots of bullied kids come down here: "crying, alone in the dark."   Gulp

What janitor spends her whole life in an unused corridor?  She must be a ghost.  I'm guessing the ghost of someone killed in a transphobic hate crime years ago.

She lets him borrow a a magical ocarina that can stop the bullying: whoever hears it will feel what the player is feeling.

Back upstairs, Elliott uses the girls' restroom.  Two girls make fun of him, so he plays the ocarina, and they scream and cry and apologize.

He rushes down and tells Janitor about his victory.  Now she offers to let him have the ocarina permanently, for a price -- the notebook where he writes all of the music he's been composing.

But...but "My whole heart and soul is in this.  I wouldn't know hwo I am without it."  So basically she wants his soul.

He makes the trade. 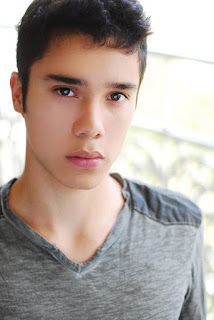 When Tony (Micah Solis) tries to beat him up, he plays the ocarina again, but this time Tony collapses in pain as his wrist is broken off.  Hey, no fair.  Elliott wasn't feeling physical pain..

Elliot runs down the hallway and encounters Principal Transphobe.: "You act all innocent, but you're rotten fruit, poisoning the minds of the other kids.  I'm not going to let you destroy the school.."

Elliott plays the ocarina to get rid of him, and rushes down the stairs to the unused corridor. He looks in abandoned lockers and sees...dead kids!  "The next locker is for you," Janitor says.  She's going to remove his pain from his "human husk," so it will live on forever.

Whoops, Principal Transphobe has followed him down the stairs, and he's got a weapon!  Use the ocarina or not?

Well, Elliott has to.  The Principal is trying to kill him.

Principal collapses in pain as his fingers bend back and break. 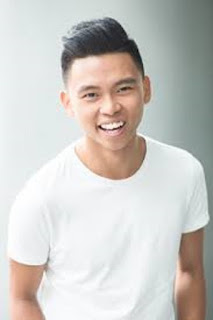 "Now you're mine!" Janitor squeals.  But Elliott gets the idea of breaking the ocarina.  Janitor disappears, and the two missing kids come back to life: a boy (Jhomer Suyom) and a girl..  They become Elliott's friends and help him thwart bullies through insults rather than physical pain.  The school also gets a new principal.

Narrator: "And eventually that boy became an old man, and his memories became stories bound in a dusty book."  Huh?  Not on Amazon Kindle?  But the witch never forgot about him -- as she appears at the window.

Two sentences appear on the final screen: "I don't have many friends.  That's why I keep them in the basement."

Ok, I get it.  The story is an elaboration of the "two sentences."

LGBT Representation: Rather an old-fashioned view of the LGBT person as a perpetual vicitm and outcast, living in constant pain.

Plot Twists: Janitor (Janet Kidder) apparently adopted a masculine presentation on purpose, so audiences would think she was a victim of an anti-gay or anti-trans hate crime.  I was surprised when she turned out to be evil.