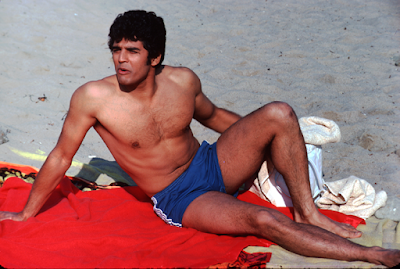 February 15th, 1981.  A Sunday night during my junior year at Augustana College.  The day after Valentine's Day.  Last year I was with my first boyfriend, Fred; we couldn't go out, of course, but he gave me flowers and cooked a nice dinner.  This year, with no one open on campus and no gay venues in town except for a bar that I'm too young to get into, I sat at home, lonely and depressed, while my parents and younger brother went out on their respective dates.

Tonight I feel even worse.  To avoid a hassle with my parents over not going to the evening church service, I drive to campus,  get a burger and fries in the Student Union Snack Bar, and hang out in the tv lounge.

7:00: Fortunately, the lounge is empty, no fratboys clamoring to watch the boob fest Charlie's Angels ("in your next assignment, Angels, you will go undercover as bikini models").  I turn it to CHIPS, about California Highway Patrol Officers Ponch (Erik Estrada) and Jon (Larry Wilcox) showing off their biceps and bulges.  In tonight's episode...well, who cares?  I get to see Erik Estrada. 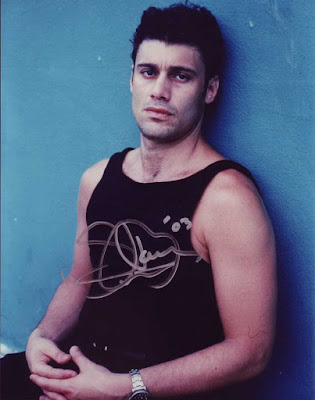 7:30: Two guys come in and ask if they can watch One Day at a Time -- "Barbara is smokin'"   I don't mind -- liberated woman Ms. Ann Romano raising her two teenage daughters in small-town Indianapolis is always good for hip, relevant, with-it dramedy.  Besides, in the sixth season, the girls have grown up, Julie is gone altogether, and Ann has filled the gap by adopting her late boyfriend's son Alex (Glenn Scarpelli, who will come out years later).  In this episode, Barbara (Valerie Bertinelli) takes on the case of an immigrant set to be deported, played by the hunky Steve Bauer. 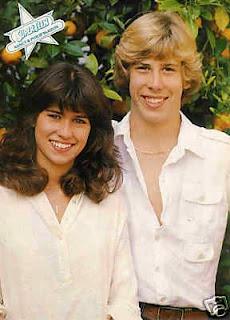 A few more people have come into the lounge, mostly girls or girl-boy couples.  Someone points out that Animal House is playing on NBC.  But it started at 7:00 -- it's half over.  So we leave the tv on CBS.

8:00: Alice.  Another liberated woman, single mom Alice Hyatt finds happiness as a waitress at Mel's Diner in small-town Tucson, Arizona. In the fifth season, "Kiss my grits" coworker Flo is gone, and son Tommy (seen here with sister Nancy McKeon of The Facts of Life)  is a college hunk.  Tonight he skips class to sing at a saloon. 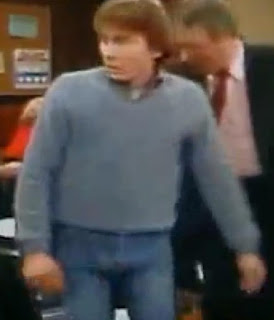 8:30: The Jeffersons.  In a spin-off from All in the Family, newly wealthy George and Louise Jefferson, and sometimes their son Lionel, move to a "deluxe apartment in the sky," where they encunter various forms of prejudice. In this episode, George goes to a meeting about "keeping low lifes out of the neighborhood."  Turns out that it's a Ku Klux Klan recruitment rally.  When the leader has a heart attack, George saves his life, and his teenage son (the extremely bulgeworthy Ike Eisenmann) stops being racist. 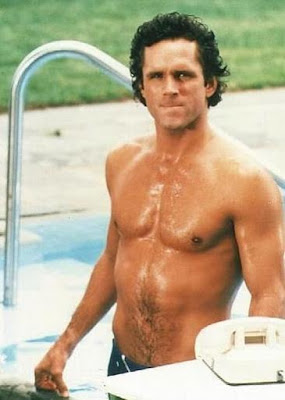 9:00: Now the tv lounge is nearly full, every couch and chair occupied.  NBC has a special, Women Who Rate a Ten, about "the spectrum of female beauty from Mae West to Miss Piggy."  I'm about to bolt, but we take a vote, and it's 9 to 7 in favor of:

Trapper John, MD: In a spin-off from MASH, thirty years after the end of the Korean War, Trapper John is Chief of Surgery at San Francisco Generral Hospital (don't get excited -- this is a gay-free San Francisco).  He butts heads with young loose cannon surgeon Gonzo Gates (the extremely hunky Gregory Harrison).  Tonight a con-man (perennial tv hunk Dick Gautier) doesn't believe the doctors when they tell him he needs an operation.Plus his girlfriend is pregnant.

It's my turn, with no more room for lies.

For years I've seen my life through someone else's eyes.

I didn't get a boyfriend, or see or hear anything gay.  Still, I feel a lot better.

Sometimes all it takes is a little beefcake.

Email ThisBlogThis!Share to TwitterShare to FacebookShare to Pinterest
Labels: 1980s, Augustana, hip sitcom, One Day at a Time, Sunday night