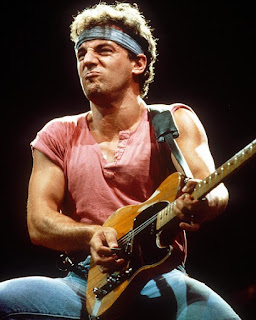 I wrote an innocent little post about Bruce Springsteen in 2016.
I didn't know much about Mr. Springsteen.  I'm only familiar with a few of his songs, such as "Blinded by the Light," "Born to Run," and "Dancing in the Dark." But his biography, Born to Run, had just come out, so I thought  that a post would be timely, and conducting the research would be fun.
I happened to mention a 1975 song called "Backstreets," in which Bruce in the persona of a working-class teenager talks about a boy named Terry, whom he was obviously in love with,  "on the backstreets."  They engage in various delinquent and destructive activities, one of which is "ripping off the fags": presumably picking the pockets of gay men who were out cruising.
BAM!  The screaming started!  "You despicable monster!  You Judas!  Our Lord and Savior Bruce Springsteen never wrote that!  He couldn't possibly write that.  How could Our God say something hateful?  He can do no wrong!  You just made that up in an insane attempt to denigrate his holiness!"
And that's just the ones I didn't delete immediately. 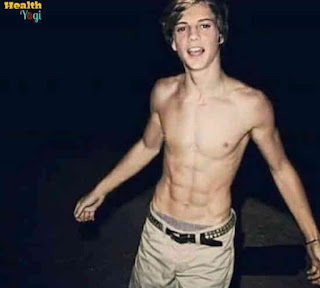 I'm used to getting screamed at when I mention a gay subtext in someone's work, especially a teen idol: "How dare you accuse Him of something so horrible!  He's totally straight!  I know because he's my boyfriend, and we hug and kiss every night, and as soon as I get old enough, we're going to get married!"
But true believer ire over one homophobic slur in one line in one song among the 3,000 or so written by their God -- that's a new one.
So I'm going restore my honor as a journalist by proving that I wan't lying, and I didn't make it up for some nefarious purpose.  Here are five citations where the line appears.
1.  BruceSpringsteenlyricscom: Unofficial studio version #2, recorded between May and July 1975 at the Record Plant in New York: "Watching the heroes in the funhouse, ripping off the fags." 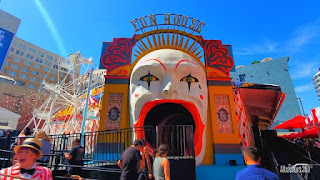 2. Bruce Springsteen Lyrics Database: The line appears in both the "Carnival Lights" and the "Basement of St. Johns" versions, but it doesn't have a comma: "watching the heroes in the funhouse ripping off the  fags."  Could Terry and Bruce be watching someone else do the deed?
No, that doesn't make sense.  Carnival funhouses were buildings with dark corridors where scary things popped out at you; they weren't used for cruising.  For that matter, funhouses didn't have heroes.
3. In the book Runaway Dream: Born to Run and Bruce Springsteen's American Vision (2010), the line is interpreted as suggesting that Bruce had a romantic relationship with Terry (a boy), but they couldn't be open because of societal disapproval of "fags."
4. The Springsteen Discussion Board (https://www.spl-messages.net/) has a discussion of the song.  Most posters agree that it's about a gay romance, but one person disagrees, suggesting that a guy in a gay relationship wouldn't use the phrase  "ripping off the fags"
5. The article "Queer Bruce Springsteen" in Popular Music  reads the line as indicating that Bruce and Terry were MSM: working class men who have sex with men, but don't identify as gay, and in fact look down on "fags."
But I don't intend to denigrate your religion.  Bruce Springsteen can still be your Lord and Savior.
1. He is writing from the point of view of a working-class teenager in the 1950s, who would have used that term.
2. During the 1970s and 1980s, movies threw around the word "fag" with no qualms at all.  Try to find a 1980s comedy where it doesn't appear.  Bruce may have though that the word would be ok.
3.  But the line appears in only two early versions of the song.  Bruce changed it for the album and live performances, so no one has ever heard it.
Posted by Boomer