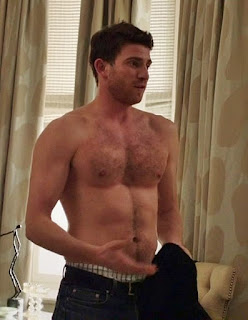 I've heard of Joni Mitchell, but I don't recognize any of her songs.  Is she a lesbian icon? 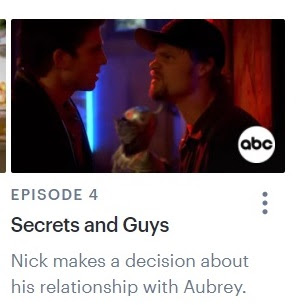 October Road just dropped on Hulu.  In search of gay characters, I looked at the episode guide.

The title of Episode #4, "Secrets and Guys," implies a secret gay relationship.  The icon shows two guys interacting, and the blurb says "Nick makes a decision about his relationship with Aubrey."  Aubrey is a boy's name with gay connotations, reminiscent of the artist Aubrey Beardsley.   All signs point to Nick being involved with a boy.

But I've been fooled by gay teases before, so I'm not going to invest until I do a more research and find out if Aubrey is actually a boy, or a girl with a boy's name.  According to the EW article, the show involves these relationships: 1, Focus character Nick (Bryan Greenberg, top photo)  left his small town to become a famous writer, and has returned, naturally.  He discovers that his ex-girlfriend Hannah has a son old enough to be his.  She denies it.

2. Owen (Brad William Henke) gets upset when his wife has an affair with his best friend Ikey (Evan Jones).

3. Eddie (Geoff Stultz, left) is dating the local female bartender, but Rooster (Sean Gunn) is also into her.

4. Agoraphobic Phil (Jay Paulson) tries to get a girlfriend, in spite of being unable to leave his house.

5. There's a gay reference in Season 2.  Stacey moved to the Big City to get married, but discovered that her husband was gay, dumped him, and came crawling back.  Gayness is presented as a traumatic experience for heterosexuals.

Given the homophobic premise of #5, I'm reasonably sure that Nick and Aubrey aren't a gay couple, but it's odd that none of my sources say who Aubrey is.  The most I can find is: Aubrey is one of Nick's creative writing students.  They date during the first season, but Aubrey is uncertain about the relationship, and ends up cheating on him with his brother Ronnie (Jonathan Murphy)

No pronouns.  Darn it, is Aubrey a boy or a girl, or nonbinary?

Time to check the complete cast list on IMDB.

Aubrey is played by Odette Annable, an actress who has played only female roles.  Mystery solved.

I don't understand the big cover-up.  Why give the girl a gay man's name and hide her pronouns?  Maybe heteronormativity: in a world where gay people don't exist (except as traumatic experiences off-camera), the writers never considered the possibility of a gay reading.