"Young Rock": A Boy Growing Up in the 1980s Becomes The Rock 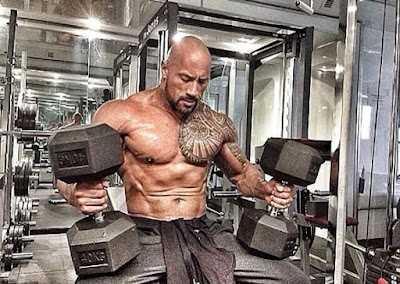 I've seen some of Dwayne "The Rock" Johnson's movies, but I can't name any at the moment; my knowledge of professional wrestling amounts to "isn't it fake?", and it took six dowloads to find a beefcake photo that wasn't a .jfif, .webt, or .aviv.  So I doubt that I'm in the target audience for the fictionalized biography, Young Rock.  But a review on the wrestling website Slam praises the introduction of gay wrestler Pat Patterson: his tag team partner Peter Maivia kisses him, "telling the other wrestlers in the locker room to get over their prejudices or deal with the High Chief."  Patterson was instrumental in Johnson's wrestling career, and appears in six episodes.  Unfortunately, he's not mentioned in any plot synopsis, and Season 1 doesn't seem to be available on Hulu, so I reviewed Season 2, Episode 1, "Unprecedented Fatherhood."

Scene 1: In 2032, Dwayne is running for president.  His best friend, Randall Park (playing himself) goes to the family ranch to interview him.  His daughters call, and he sings them "Desperado" because "Family comes first."   He tells us that he had a "complicated" relationship with his own dad.... 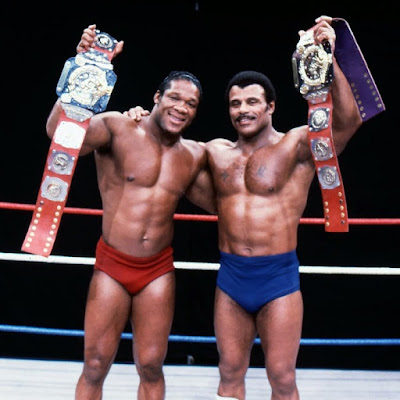 Scene 2: Hawaii, 1983.  The kid Dwayne and his mother and grandmother are watching his Dad Rocky and partner Tony Atlas tag-team wrestling on tv.  Dwayne imagines himself into the ring, and trounces their opponents.  A WWF (World Wrestling Federation) Victory!

A knock on the door.  Uh-oh, it's Agent Fong, FBI, there to yell at Grandma for breaking her house arrest (she threatened a rival wrestling promoter on camera). Wrestling is definitely a Johnson family tradition. 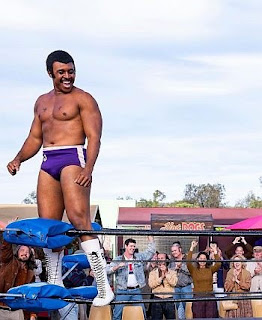 Scene 3: Dwayne, Mom, Dad, and Tony Atlas go out to celebrate their WWF Victory.  Grandma sneaks along, but Agent Fong appears and sends her home.
Tony monopolizes all of Dad's time.  Kid Dwayne is jealous, and imagines winning Dad's love by clobbering Tony.

Back in 2032, Dwayne tells us that his Dad was on top for just a short time.  He was kicked out of the WWF; they went broke, and got evicted from their apartment. 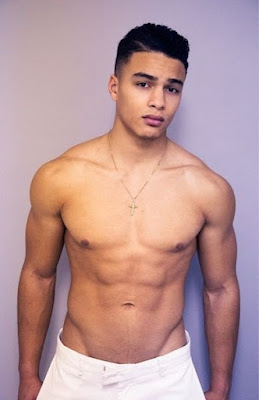 Scene 4: 1987: Dad found wrestling work in Nashville, doing exhibitions at county fairs and such.  He's rented the family an apartment.  Teenage Dwayne (Bradley Constant, left) will join him right away; the rest of the family will come in a few weeks.

Scene 5: Arriving at the airport, Teenage Dwayne hopes that, with his Dad less famous, they'll be able to spend some time together, but he's picked up by a burly wrestler named Bob Owens.  He takes Dwayne out to eat; still no Dad.

Eventually Bob drops him off at a sleazy hotel; but still no Dad. Reviled wrestling manager Downtown Bruno answers the door.  "Your Dad will be around soon; in the meantime, let's go out to dinner."  Didn't the kid just have lunch?

Scene 6:  At dinner.  Gay reference: A disgruntled fan tells Downtown Bruno "Up yours!"  Bruno responds: "You wouldn't know what to do up there."

Finally Dad arrives, and drops a bombshell: "I'm going out on the road.  You'll be staying with Downtown Bruno for a few weeks."  His hopes of spending time with Dad are crushed!  No wonder the adult Dwayne sings to his daughters every night.  And by the way, there is no apartment.  This guy is quite a jerk.

Scene 7:  Back in 2032, Dwayne tells us that his Dad traveled all over the world, in search of the next match. There was no stability in their lives; they never stayed in one place very long.  And when he grew up, he started out doing the same thing.  Like he tried out for the Calgary Stampeders football team. 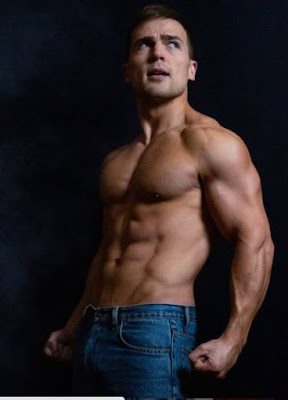 Scene 8:  Calgary, 1995.  The young adult Dwayne at the Stampeders training camp in Calgary.  His salary is so low that he has to move into a crappy apartment, and furnish it with the mattresses that the sex motel across the street threw out.  Plus he bragged to a reporter that they were 18 and 0, which gets him in trouble the other players, especially with three-time CFL champion Doug Flutie (a real person, played by Victor Gralak). He complains to his girlfriend, but pretends that everything is great to his family.

Turns out that Dwayne doesn't know the rules of Canadian football; he bombs during training camp, and doesn't make the team.  They put him on the practice squad (like understudies, I guess), for even less money!.  Gulp.   But he decides to stick with it, because after such an unstable childhood, he values stability.

Beefcake: Quite a lot.

Other Sights: Some establishing shots of Honolulu, Nashville, and Calgary.

Wrestlers and Footballers:  Quite a lot, but each is introduced with a little score card, so non-fans are up to speed.

Gay Characters: None mentioned, but no one except Dwayne expresses any heterosexual interest, either.