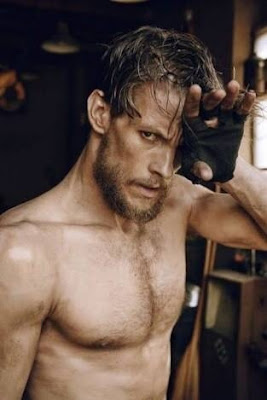 I started watching the Polish detective series Ultraviolet (2017) by accident: you click on the icon for more information on Disney and Hulu, but on Netflix you have to look for a little arrow; if you click, it starts.  But I'm hooked now.

Scene 1: Ola is having a bad day.  The clerk at the gas station gives her a hard time, then she rides off with her coffee on the hood.  And just when she's popped a pill, so she can go home and go to bed, she gets an Uber customer.  Great!  Her entitled college student passenger invades her social media accounts, and discovers that she was living in London and had a husband.  "What happened?" "None of your frickin' business!" "Why did you come back to Poland?  This place is a dump!"

She drops off the fare at a fancy hotel, and gets a rating of only two stars!

Scene 2: As she drives toward the train station, she sees a man get out of a car on the overpass.  Suddenly a body falls from the overpass, bounces onto an oncoming car, and hits the street.  The other driver zooms off.  Ola calls 111.  "Check for the victim's pulse."  "She's squashed."  "Check for a pulse!"

Scene 3: Hot Detective (Sebastian Fabijanski, top photo) listens to her story about a man on the overpass -- it must have been murder!  But he thinks she was drunk or high.  Grr.

Scene 4: Ola visiting her mother, who is recovering from hip surgery: "It hurts so much...."  "Why don't you let the police handle it?"  "But it's just like what happened when  my brother Maciek died.  He was shot in the head.  The police were useless."  Mom continues to protest.  Ola storms out. 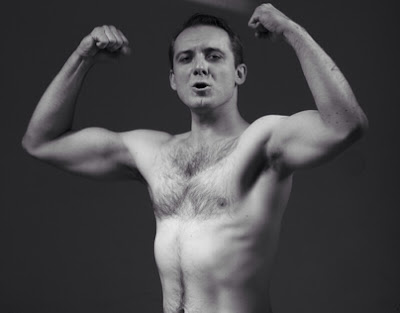 Scene 5: Ola drinking in an open-air restaurant.  She googles what to do when the police can't help.  Call the A-Team. On this case, Ultraviolet: an informal group of online investigators who, the head honcho Tomek (Michael Zurawski, left) brags, have solved over 100 of the 2,000 unsolved murders in Poland.  "We're like the Spice Girls -- each of us has a unique style."

Scene 6: Tomek tells about the first case he solved, at age 16: "the lady in the lake," a woman who drowned.  The police called it suicide, but he knew it was a murder....he's interrupted by his wife.  She's ovulating, so they have to go have sex.  Darn, I figured he was gay.

Scene 7: Ola submits her "Lady of the Overpass" case , and it's networked to Ultraviolets all over Poland.

Switch to a woman -- is it Ola?  Every woman in Poland is blond; I can't tell them apart -- filming a podcast about fashion tips.  She's interrupted by the phone ringing.  It's the Lady of the Overpass case.  She recognizes the victim's t-shirt as a limited edition given out by a chain of gyms.

Switch to Tomek checking the gym chain's website -- and there's a picture of the victim, Monika!

Scene 7: Ola visits the Chief Inspector, who is not happy: "What now?"  "Another murder for you to sweep under the rug."  He ignores her and walks away.  Next she accosts Hot Detective: "Did you find the identity of the Lady of the Overpass yet?  No?  Well,  my scoobies and I have it figured out."

"I've looked up her biography online.  Her social media account is private, but I sent out friend requests to all of her friends."

"I've only taken eight pills in four years!  My brother gave them to me."

He remembers brother Mariek's case: he was abusing his wife, and she shot him in self-defense.  "They were divorced, and she ambushed him and shot him from ten feet away."

They are interrupted by a ping: one of Monika's friends accepted Ola's friend request, so now she has access to her social media account. Her last post was at 1:05 am: "God forgive me, I don't want to live."   Sounds like a suicide note, except she added nine cat emojis.  Who would do that?

More Ultraviolet data: Monika hated emojis; she unfriended anyone who used them.  So why the cats?  Obviously she didn't write the post, or she was being coerced.

Scene 8: Ola visits the elderly Henryk (Marek Kalita) on his gated estate.  He is not happy to see her. Geez, Ola has a bitter back story with everybody.  He disapproves of tangling with the police again, but as long as she insists: find the car that Monika fell onto.  The dents will tell whether she fell, jumped, or was pushed.  There are lots of BMWs in Lodz, but not many with owners who run from an accident....

Scene 9: Ola accosts Hunky Detective with Henryk's theory about the BMW owner.  He's reluctant to help: "Kraszewski, the chief investigator, has already closed the case.  It's a suicide."  But finally he gives her the car owner's address, and she and Henryk drive over.  Uh-oh, the hood has been replaced! Not suspicious -- of course you'd get your car fixed.  They find the old one in the trash, take some photos, and bring them to Hunky Detective:

The hood has two dents.  If she was conscious when she fell, there would just be one.  She was drugged, unconscious, or already dead.

Scene 10: Hunky Detective doesn't care, so Ola and the Scoobies get busy recreating the last days of Monika's life.  She just broke up with her boyfriend, but they stayed friends, and he wasn't in Lodz the day of her death.  The night she died, she went to a college party -- with Ola's Uber fare! 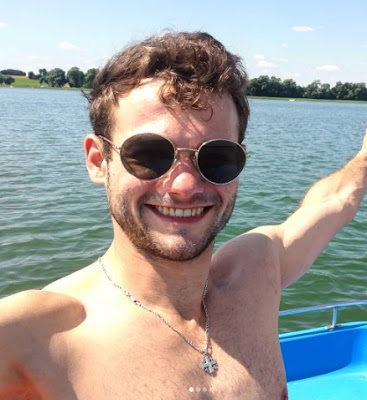 Scene 11: While Ola tracks down the fare, Henryk explains their relationship to Hunky Detective: When she was 13, her father died in a car crash.  He was the auto forensics expert assigned to the case, and they bonded.  He became a father figure.  Also her inspiration to investigate weird cases.

Meanwhile, Ola interrogates the fare: At the party, Monika said that she had just broken up with her boyfriend, and was anxious to start "the new chapter in her life."  The new chapter arrived, and she left with him: Wojtek Kraszewski (Kamil Wodka, left), the son of the chief investigator, who closed the case right away.  Obviously Wojtek killed her, then called Daddy to clean up his mess!

Scene 12: The Scoobies find Wojtek's last post, from Pilsudski Park, 20 minutes before Monika fell (or was pushed) from the overpass.

But the park is 25 minutes from the overpass.  How could he have killed her, carried her body to the parking lot, and driven to the overpass in that time?  They experiment, with Hunky Detective carrying Ola -- even running, it takes 8 minutes to get to the parking lot.  Then a 25 minute drive in 12?  You'd have to speed and run red lights -- not smart with a body in your car.

I'll stop there.  I don't want to give away the ending.

Other Sights: Quite a lot of Lodz.

Heterosexism:  A few incidental references, like Marek's wife telling him it's time for sex because she's ovulating.  I expected "will they or won't they?" anger- flirting between Ola and Hunky Detective, but it wasn't there, at least not in the first episode.

Gay Characters: Hunky Detective and Henryk don't display any heterosexual interest.  They probably have dead wives in their back stories, but it wasn't referenced here.  There was also some girl-on-girl kissing at the party.

Plot Twists:  There are plenty of amateur detectives out there who run rings around the cops, but the addition of the scoobies made Ola's transformation into Miss Marple seem fresh.