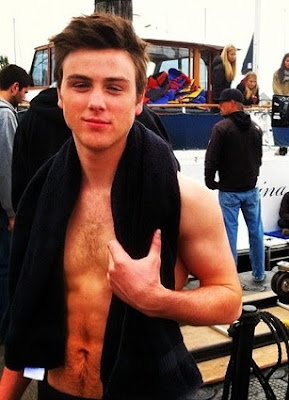 Dimension 404 (2017), on Hulu, was a horror anthology with Twilight Zone-style narrator and a cyberspace theme, promising "stories like none you've ever seen before," although most of the stories were seriously cliched.  Then it said "You have 20 minutes left," although each episode was over 40 minutes long. I ended up fast-forwarding a lot.  But at least there was a lot of LGBT representation.
Two of the six episodes centered on LGBT protagonists.

"Polybius": Andrew, a bullied gay teen (Ryan Lee) in the 1980s, accidentally unleashes a demon in a video game.  He thwarts it with the help of his two friends, one of whom (Sterling Beaumon, left) might return his affection.  Or maybe he's a gay ally, which would have been quite brave at the time.  The word "gay" never appears ("fag" does), but you get the idea from Andrew saying "I'm tired of hiding" and telling his friend "I love you."   Plus the narrator talks about "being different"

Plus there are a lot of locker-room hunks wandering around in two separate scenes.

"Bob": An army therapist has to treat a supercomputer made of human flesh, so he can thwart a terrorist attack on Christmas.  She is anxious to get home to her wife and kid for the holidays. "Cinethrax": A Gen X slacker (Patton Oswalt), in a theater occupied entirely by cellphone-clicking millenials, sees a monster through his special 2-D glasses.  He attends the movie with his niece, not a girlfriend, and never expresses heterosexual desire.

"Impulse": A video gamer discovers an energy drink that speeds up time, thus allowing her to play faster and win competitions.  Unfortunately, it also fast-forwards through her life. She gets a husband (Matt Lauria, left) and kids, but only to indicate time passage through the Apocalypse (caused by the energy drink). 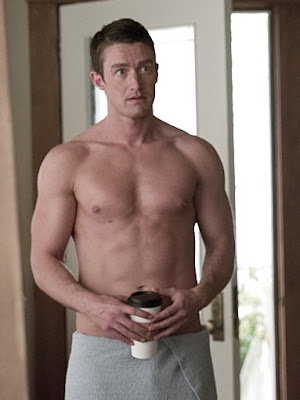 "Matchmaker": Although he is attractive, has an impressive bulge, and lives in a gorgeous New York apartment,  Adam (Robert Buckley) can't get a date.  His sleazy roommate advises him to try an online service. 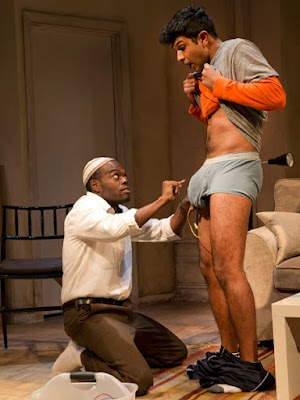 "Chronos": A physics student and her boyfriend (Utkarsh Ambudkar, right) encounter a time-traveler from a 1990s tv show.

Hulu cancelled the series after one season of six episodes.  Maybe the humor was too snarky, or the plots were too drawn out, or there was too much competition from other horror anthologies.