"Rainbow": Dorothy, A Shirtless Scarecrow, and a Gay Cowardly Lion on a Surreal Road Trip Through Oz

There have been a lot of homages to The Wizard of Oz -- always the 1938 movie rather than the book series.  But I wouldn't mind seeing another.  Rainbow (2022) is from Spain, starring a number of famous Spanish singers.

Scene 1: A young adult girl (singer Dora Postigo) cuts her candy-apple red hair while screaming, crying, and gyratinc erotically.  She goes to her room and kisses and hugs her dog. Toto. Dad Diego asks her to stick around, but she says no and leaves.

It's a big house set by itself in the grassland, with woman in a chadoor herding goats and a muezzin announcing morning prayers. Carrot top -- Dora -- skates through town, being distracted by a hot shirtless teenager, a woman in a chadoor hula-hooping, and construction workers tossing bags of cement like beanbags.  So far I like this country.

Dad calls -- he didn't have time to get the cake -- so could she pick it up?  She heads for the Jamoneria.  Sign is in English, Spanish, and Arabic, so Ceuta? The bizarre twin clerks point out that she doesn't look like her mother, which upsets her.  Hey, a snazzily-dressed lady kicked her dog!   "Fucking witch!" Dora yells.

Scene 2: At home, Dora blows out the candles on her birthday cake (she's 16).  Then she asks if Dad has been lying about her mother being dead.  "She's alive, but she's crazy and evil, and wants nothing to do with you."  Dora decides to look for her anyway, and leaves the house -- during a thunderstorm, with a tornado on the horizon!

Scene 3: Dora walking through the woods at night.  She comes to an ultra-modern house with huge glass windows lit red, green, purple, and blue.   She enters one of the green rooms and climbs the stairs, and finds the witch and an elderly woman discussing pulling the plug on an old guy.   "It's our time now," Witch tells her. "We have half our lives ahead of us."  A lesbian couple!

Dora announces that she's looking for her mother, who used to work there.  In fact, the elderly woman -- Maribel -- is her grandmother!  Suddenly the husband flatlines.  While evryone scurries around, Dora talks to another young woman,  She says that her mother is now living in Capital City (Ciudad Capital), and gives her a pair of silver stiletto heels.

The argument escalates.  The Witch shoots at Maribel, and accidentally hits the dead guy -- the second richest man in the country!  No one will believe that he was already dead, so the Witch blames Dora and calls the police.  She runs home. 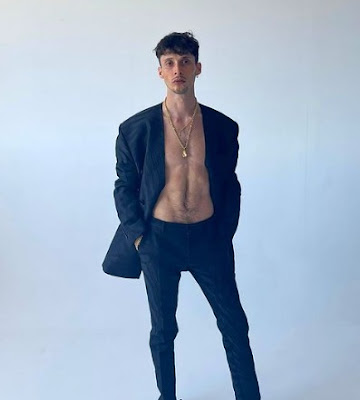 Scene 4:  While the Witch talks to the hunky Detective Antonio and her lawyer -- she's the dead guy's sole heir --, Dora walks through a desolate field.  In a junk yard, she encounters a cute guy-- the Scarecrow, aka Muneco  (rapper Ayax Pedrosa, left) -- chained up in his underwear  (nice physique).  The junkyard owner's sex slave?   She frees him, and they leave the junkyard together.

Scene 5: An old guy in a fancy car on the phone, telling Maman (Mother) that he's closed all the joint accounts and shared memberships.  Then he tries to drive off a cliff, but his GPS won't let him.  He'll have to jump off.  At that moment, Dora and Muneco appear and talk him out of it.  Dora kisses him.  The Tin Man?

Scene 6:  Old Guy has agreed to drive them to the nearest bus stop. They sing.  Meanwhile, the Witch announces that she's pregnant, and she's not going to cancel Dead Guy's birthday party, in spite of his funeral being the same day. 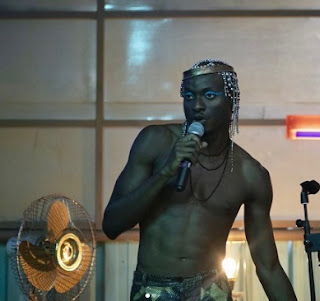 Scene 7: Dora and company stop at the Voodoo Bar, which is occupied entirely by hunky West Africans.  When everyone starts dancing, a femme guy with a nice chest blows a kiss at a homophobe, who attacks: "Don't try that gay shit here!"  Muneco intervenes; there's a fight.  They push Femme Guy (fashionista Wekafore  Jibril) into their car and drive away.  He explains that the aggressor was his brother.  The Cowardly Lion?

Muneco squirts them all with a psychedelic drug that turns the highway into the Yellow Brick Road, and then an asteroid belt where Michael Jackson, who starred in the Wiz, is riding a manatee.  They end up in the ocean, splashing around in their underwear. 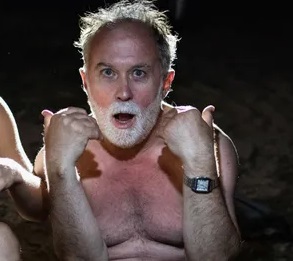 Scene 8: Morning.  The guys, half-naked, asleep in the car. Old Guy (Luis Bemejo) says that last night was fun, but doesn't change anything: he still intends to drop them off at Capital City and then commit suicide.  They stop at a roadside stand for breakfast.

Meanwhile, the Witch has decided that the police won't do anything, so she'll find Dora herself.  She threatens Marisol into searching.

Scene 9:  They arrive at the Poppy Field Motel, where Dora's Mom reputedly works: a rundown casino with a child act performing, then bingo.  A one-eyed bartender tells her that Mom doesn't work there anymore, but she'll try to track her down.  "Stay at the hotel tonight, and I'll let you know if I find anything."  Then she makes a sinister phone call: "Someone is here, asking about her."

Scene 10: In separate hotel rooms, Old Guy tries to discuss his existential angst with Muneca, who isn't right in the head and doesn't understand, and Dora and Femme Guy discuss their plans for the future.  They don't have any. Then they squeeze each other's breasts and kiss to see if "it bothers" them.  It doesn't.  In the morning, Femme Guy has turned into a lion.

I'm out of space, so I'll end the scene-by-scene there. 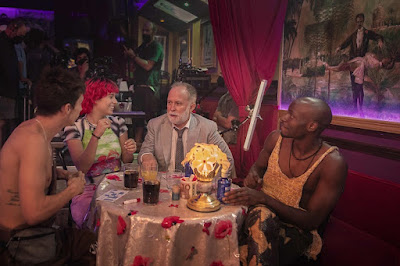 Beefcake: Constant.  No one in this country wears a shirt.

Other Sights: A barrage of strange and intriguing imagery.

Gay Characters: Femme Guy, I assume, although he and Dora kiss.   Witch and Marisol are romantic partners, sort of.  Muneca doesn't express any romantic interest, and dresses in drag in one scene.  I think everyone is pansexual.