"Don't Read This on a Plane": Bookstores and Lesbian Sex 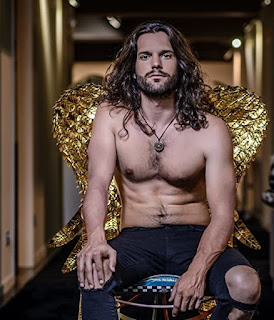 Jovana Fey has just published her third novel, entitled Don't Read This on a Plane (because it's about a plane crash?), and is about to start a big three-week European book tour (wouldn't it need to be translated into various European languages?).  Suddenly her publisher goes bankrupt, and she's stuck in Europe with no money (didn't she get an advance?  Or royalties on her previous books?)

Just go with it: she decides to do the tour anyway,  and I haven't been to Europe in six years.

1. Venice.   Jovana tries to check into the Ramada Venice, but her booking was cancelled.  She calls her publisher in Australia, and finds out about the bankrupcy.  The bookstores still have copies of her book, and the plane flights are paid for, so she can go on the tour if she pays for everything else.  But she's penniless.

Her heterosexuality established through a reference to her husband back home, we're ready to continue.

Jovanna gets a bed in a horrible cut-rate youth hostel, eats a horrible breakfast (well, to be fair, Europeans can't do breakfast right)., and has a conversation about dark matter with Xavier (cute).  He tells her about MOUF, a network of travelers who will let you crash at their place for free.

Her first MOUF night: exuberant boy-girl couple Luc and Desi.  I expect them to ask for a 3-way, but they don't.

She hitchhikes to the airport (an Italian lady trucker discussing hiphop!). 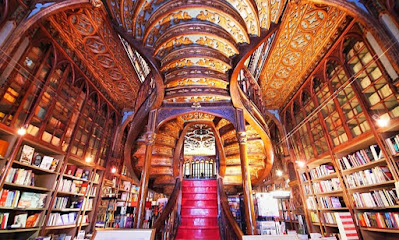 2. Porto.  My favorite city in Portugal!   The incredbly ornate Livreria Lello!  This time Jovanna reads a passage about two women just beginning the hookup, before they get to the oral sex.  The audience likes it; she even gets a girl's phone number.

She discusses her husband with the next MOUF couple, and then calls him on his oil rig in the North Sea.

3. Burgundy, France.  Never been there.  Jovanna hitchhikes from the airport to the Book Barge, which is actually a barge floating in the river.  The audience consists of one elderly woman, who requests Chapter 56, about how much time it usually takes between meeting a girl and having explicit oral sex with her.  I'm starting to realize why you shouldn't  read this book on a plane -- it's pornography.  I'll be fast-forwarding through the book readings from now on.

Later, at the airport, Jovanna calls to flirt with Ksenia, the manager of the bookstore in Oradea, Romania. 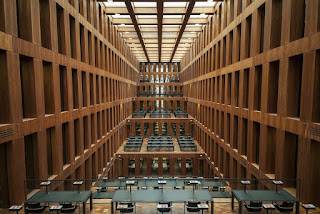 4. Berlin.  I've only been to southern Germany, Munich, Regensburg, that area. The Grimm Zentrum, the main library of the Humboldt-Universität, completed in 2008.  Rather a prestigious locale for reading a passage about meeting a woman, getting Chinese food, and then "devouring each other."

Some of the listeners take her out for beer later and ask if she really hooks up with a lot of women, or it's just fiction.

She asks whether the authors of crime fiction really commit the crimes.  That's how I answer when people ask "Since you write books about gay communities, are you gay?"  "Are the people wro write about ancient Greece really ancient Greeks?"

She flirts with an ugly guy named Francis, but refuses sex with him. 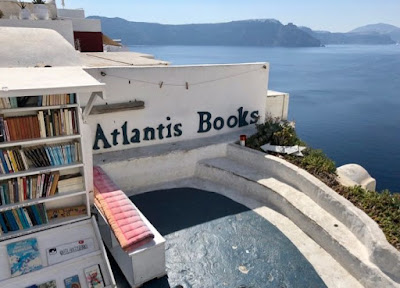 6. Santorini, Greece.  Rather off the beaten path.  I would have thought Athens.  She tries to call Theo, who runs a fish restaurant in Soho, to ask for money.  But her phone keeps cutting out. Her husband?  But I thought he worked on an oil rig?

Atlantis Books.  Jovanna reads a passage about "She woke me with her tongue between my legs."  Of course.

An abrasive book blogger wants to  know if she really has a lot of lesbian oral sex; "No, I'm happily married."  (To a man)..  He gets aggressive, accusing her of deceiving readers.  A hot guy rushes to the rescue (NIcolas Bravos, top photo, but with short hair).

I expect them to hookup, but they don't.

Her next MOUF is a mattress on the floor of a horrible apartment that smells of dog poop. 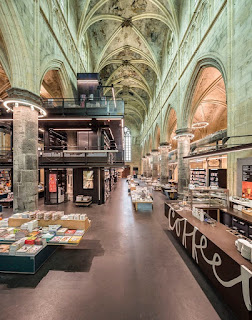 7. Maastrict, Netherlands. Boekhandel Dominicanen, so called because it's in an old church.  The reading: after oral sex, her latest hookup leaves her a note.  She reads it on a plane. It is reprinted in big letters across a two-page spread of the book: THERE'S A BOMB ON BOARD!!!!

Jovanna goes out drinking with one of the guys in the audience.  I expect them to hookup, but they don't.

She finally gets through to Theo at the "fish restaurant," actually how he jokingly describes the oil rig kitchen.  He has no money to give her.  So she calls Ksenia and asks for "an appearance fee."  Ksenia says "I will find some way to reward you."  Through lesbian sex? 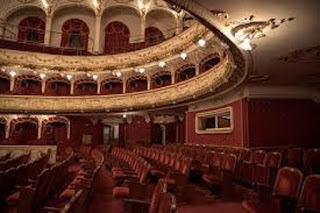 8. Oradea, Romania!  One of my favorite cities in Europe!  A relatively open gay scene.  I have three friends there, plus about a dozen ex-hookups. Jovanna finally meets Ksenia, whom she has been flirting with throughout the tour. They have dinner.  I expect them to hookup, but they don't.

Jovanna wants to blow off the reading and go to a water park instead, but Ksenia refuses.  The show must go on.

We see them in flashbacks.  Ksenia and three women I don't recognize.

"My husband doesn't care, as long as I don't become emotionally involved with these women.  But sometimes that's not possible.  I can't walk away."  She glances at Ksenia.

I expect her to dump Theo and "not walk away" from Ksenia, but that doesn't happen.

9. Paris.  The book tour over, sales ruined by the revelation that the book is autobiographical,  Jovanna goes home to Paris (why is her book in English?), to her apartment above a store called Flesh (hah-hah). She kisses Theo, and flashes back to all the people she met on the tour.

Fast forward to Theo and his friends celebrating the one-year anniversary of his restaurant. How did he get the money, when he was too broke to  send Jovanna a few euros to buy food?  He's planning to start hosting writers.  First up, naturally, Jovanna: she starts to read from her new story, "They Didn't Know It Was Music," which seems to be about her book tour.  The end. 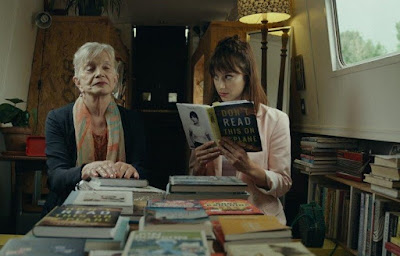 Beefcake:  None.  And none of the cast seem to have beefcake photos online.

Other Sights:  Lots of stunning bookstores.  I was hoping for more city tours.

French, Dutch, Hungarian, Romanian, Greek:  Everyone speaks fluent English.  Even Theo talking to his friends in a restaurant in Paris.

Gay Characters:  Every man and every woman wants to have sex with Jovanna.

Sex Scenes: None.  Just some kissing here and there.

Plot Misdirection:  Everything you think is going to happen, doesn't happen.  Jovanna spends all her time partying with men to distract us from the sex with women that is really going on.