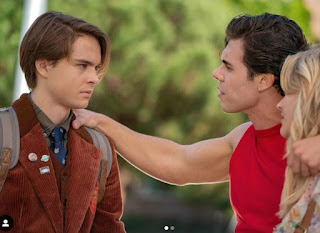 Maximilian Acevedo,  who plays the killer babysitter's boyfriend in the schlockfest Baby Sitter Killer Queen, seems to think that his character is nice.  He posts this photo of Jimmy insulting Cole with the caption: "Don't worry, Bro.  Jimmy will take care of everything."

Or maybe Jimmy turned out to be a good guy while I was fast forwarding. 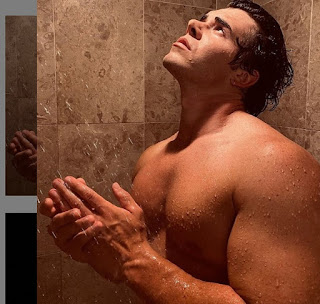 Max has an instagram page with 18,000 followers, where he posts a lot of pictures with his shirt off and gets comments like "Shit!" and falling-in-love emojis.

And a youtube channel comprised mostly of workout videos.  "A Day in the Life" is sort of interesting.  He spends the whole day running and working out amid iconic L.A. landmarks.

According to his biography on IMDB, Max grew up in poverty in Las Vegas. At age 14, he decided to overcome adversity by "turning his body into a work of art."

An interview on the podcast "Belly of the Beast" goes into more detail about his traumatic and scary childhood:

Looking at his dad through the glass window when he visited him in jail.

Hit, insulted, locked in a room, and "touched" by his mom's boyfriends.

Bullied in school due to his preference for bright colors and rainbows.

Being homeless; wondering why he was even alive. 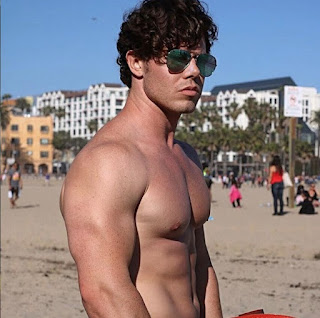 Like many bullied and abused kids, Max found salvation at the gym, and then on the stage.

He moved to L.A. in 2019, did some fitness promos and modeling, and then got an agent and started going on auditions for films and tv.

Maximilian has been on screen five times, which is quite a lot for someone who has had an agent for only about a year, during a pandemic where most productions were shut down.

1. The short "Super Hero Last Day of School,"  in which Batman, Spiderman, Deadpool, and others are high school students.  He plays the shirtless superhero Winter Soldier.

2. The tv pilot I Am, about a high school student's "thirst for power."

3. Lawn Ranger, an incompetent supervillain "here to cut your grass and kick your ass," on the Nickleodeon superhero spoof Henry Danger.

4. Also on Henry Danger, Mr. Nice Guy, a smiley-face-masked vigilante who punishes people for being rude. 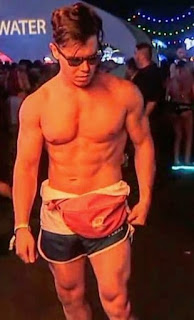 According to his biography, Max also done a "true crime" show for the Oxygen Network, and he plays himself on the animated Thumpy on Cruise TV, but I can find no other references to these projects. Cruise TV was a British channel advertising holiday cruises.

Max doesn't mention dating anyone in any of his extensive biographies or interviews, or in the extensive comments on his instagram page, except for the caption to a photo of him in Santa Monica: "Bae Watch" (a bae is a romantic partner of any gender).

Plus there's that rainbows and bright colors thing.

So I assume that he's gay.

No comments that use abusive or vulgar language or point out that a character is Not Wearing a Sign.