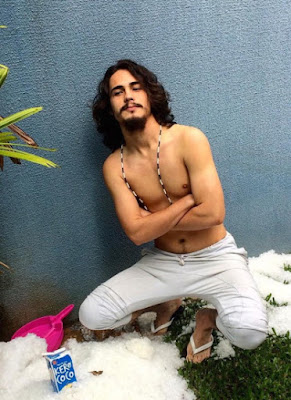 Talk about high concept: Spectros: "A group of teens become involved in a conflict between Japanese Shinto gods and Brazilian witchcraft."

It's set in Liberdade, a neighborhood of Sao Paulo with a large Japanese population.

Besides, maybe the group of teens consists of cute guys.

Scene 1: A scary Japanese ghost tells us that the living and the dead are obsessed with each other "like tortured lovers," but must never touch.  Then she explodes.

Scene 2: A Japanese family in 1858 runs through a cemetery and into a church.  Scary Japanese ghosts kill them all, except for a young girl, who is protected because she is carrying a porcelain doll.

Why would a ghost want to kill you?  Then you'd be a ghost, too, and able to get revenge. 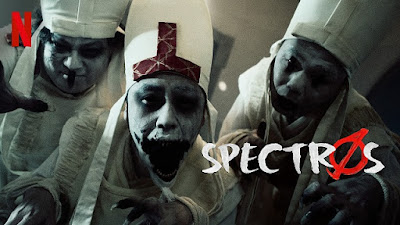 Scene 3: In the present day, hot teenager Pardal (Daniel Mesquita, who is apparently gay in real life) is being interrogated by Hot Cop and Matron about the porcelain doll, which implicates him in "Murder! And that's just the beginning!"

He sneers. (Flashback to him and two girls driving their car through a flaming mass of protoplasm.)

They try the First Girl, but she is unresponsive (flashback to her listening to music).

We get a close-up of Hot Cop's crotch as he bags up the evidence.

Scene 4:  The day before, Pardal in a muscle shirt is in an auto shop working a car while Boss yells at him for being lazy. Mila stops by to see if her father's car is ready, and Boss yells at her, too.   Pardal defends her, and ends up quitting.

Scene 5: Establishing shot of Liberdade and its eccentric residents: a woman with a mohawk, a man with a cat on his head, a street preacher, a drag queen.   Pardal stalks Mila as she tries to get away, and even though she makes it clear that she's not interested, he asks her out.  She yells at him to back off.

Is Pardal a sexual predator, or is this a tv-trope for "no means yes." 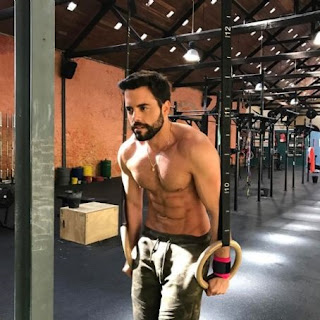 Meanwhile the First Girl, Carla,  rejects a party invitation from Zeca (Pedro Carvalho).  She then goes into the bathroom at school and bullies Mila.

Carla gets headaches, probably due to ghosts or psychic powers.

Scene 6: Mila is having trouble in school.

Scene 7: Pardal goes home.  He's poor: we know because there are kids and drag queens hanging out in the courtyard   His crazy kid brother likes to pretend that he's a dismembered corpse.  Their parents are dead or vanished or something, and the bills are piling up, and there's no food in the house.

Scene 8:  Mila goes to collect her dad, Celso, who is lying drunk on a bench. Some bullies steal his shoes.  Plot twist:  Pardal is working for the bullies!  Small world. 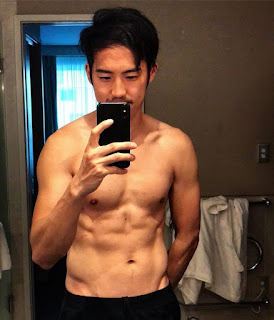 Scene 9: Back in the present, Hot Cop interrogates  Mila.  The two bullies, Li (Jimmy Wong, left) and Wong (Jui Huang), were apparently low-level Mafiosi.  Mila swears that she didn't realize that at the time.

Scene 10: Back to the low-level Mafiosi, eating dinner, discussing whether they should eat, then fuck, or fuck, then eat.  I guess they're boyfriends.

They give Pardal a job: Zenobia the Voodoo Lady has some good stuff in her apartment. Break in and steal it.  But be careful: she can make your dick fall off with her weird voodoo powers.

Scene 11: Zenobia is meditating. Cut to the police interrogation: Mila admits that she was in a stolen car.

Scene 12: Back to last night: Mila is trying to get Dad's shoes from a telephone wire (you remember, after the bullies stole them). Black Guy with Mystical Powers helps.  There are mysterious symbols on Dad's shoes, and a cop is following them.

Scene 13: At home, Mila takes off the shoes and notices the mysterious symbols. Dad says that they are the work of Zenobia the Voodoo Lady, who has given him a job. See how nicely it all fits together?

Celso heads for work at Zenobia's.  Suddenly Carla the Bully appears, needing to speak with Celso, probably about her headaches.  It all fits together even more nicely.

Scene 14: Cut to the police interrogation: how did Carla, Mila, and Parnal happen to be in the same car at the same time?  Mila wonders about that herself. 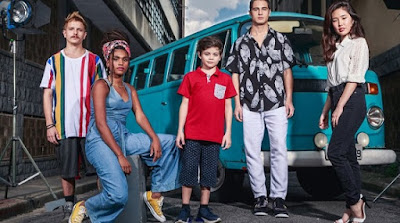 Scene 15: Cut to the three of them in the same car at the same tme.   They arrive at Zenobia the Voodoo Lady's house, Mila and Carla to talk to Mila's Dad, and Parnal to steal things.

Scene 16: Inside Zenobia's house  they are accosted by a flaming demonic being.  Carla takes a porcelain doll from it, and they run away.  They scream as the car hits something.

Scene 17: Back at the police interrogation.  Turns out that they hit the burning demonic being.

Scene 18: The scary ghost tells us: "Don't be shocked.  Everybody dies sooner or later. EVEN YOU!" 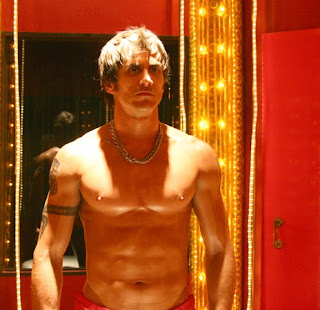 Plot:  I could do without the endless cutaway scenes, and the various plot strands fitting together seems too contrived.  Is Sao Paulo a small town, or what?

Scenery:  The exterior shots of Sao Paulo are striking.

Heterosexism: Not much.  Pardal and Mila do end up in lo---oo--oove, but it's barely alluded to in the first episode.

Gay Characters:  Nothing specified yet, but I'm hoping.  There are some gay actors in the cast, and the drag queens suggest that gender fluidity is commonplace here.

Beefcake:  Only some muscle shirts so far, but I'm hoping.  There are some mega-hunks in the cast.

My Grade:  B
Posted by Boomer No comments: Links to this post 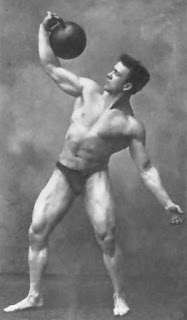 Born in 1887, William A. Pullum grew up in Camberwell, a poor neighborhood of south London.  He was a slim, sickly boy, suffering from tuberculosis and a host of other ailments.  As part of his therapy, he took up weight lifting, and soon he was starring in strength exhibitions across Britain .  In 1911 he joined the British Amateur Weight Lifting Association, and during the next five years, broke 200 weightlifting records.  He was most famous for his "Plan Feat," in which he lifted 14 men with his arms and leg -- 2000 pounds -- all the more remarkable because he was a featherweight, weighing about 120 pounds 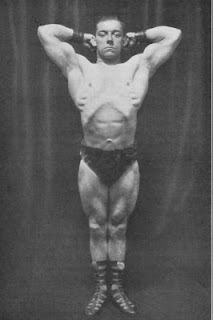 He wrote two instructional books which are still in print: Weight Lifting Made Easy and Interesting (1922) and How to Use a Barbell (1922).

As the president of the Camberwell Weight Lifting Club in England, Pullum trained many future weight lifting greats.

But he did more than train.  He offered a full range of photos of his most buffed pupils, naked except for their shoes and loincloths or skimpy posing straps, under the series "Pullum's Popular Pupils" 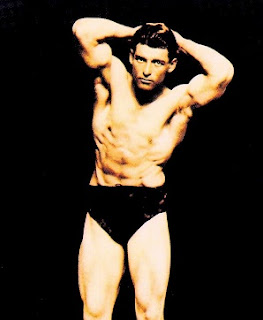 T. W. Cranfield was named "Britain's Strongest Youth" (I don't know by whom; I suspect by Pullum). 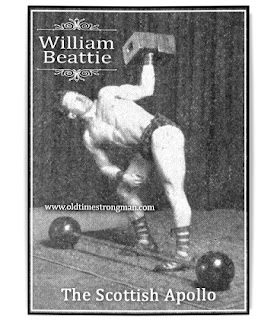 William Beattie was known as  "The Scottish Apollo."  Mostly by Pullum. 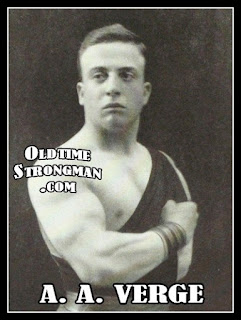 And A. A. Verge was "The British Hercules."  Hercules is more powerful than Apollo, right?

The postcards were immensely popular for amateur weight lifters to use as inspiration.

"Would you like to see my postcard collection?" was a standard pickup line.  You would display some ordinary postcards, then throw in some musclemen and decide, from his reaction, whether to make a move. 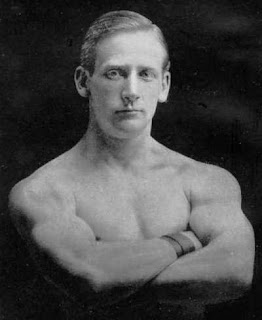 Although "Pops" Pullum retired in 1929, he remained one of the most respected elder statesmen of the weight lifting sport for generations.  When he died in 1960, he was mourned by thousands of amateur weight lifters.

And gay men.
Posted by Boomer No comments: Links to this post

Before global warming started melting the ice cap and threatening to kill us all, Antartica was the coldest place on Earth, and it still gets rather cold.  On the coast, temperatures average around -40 in the winter and 14 in the summer.  Inland, it varies between -70 and -100.

There are no permanent settlements, but between 1,000 and 4,000 people spend time at about 40 research stations.  The largest are run like small towns, with medical facilities, libraries, gyms, recreation areas, and commissaries.

And tourism is no longer a logistic impossibility.  In 2018--2019, over 50,000 people visited, both eco-tourists and seasoned travelers looking for a big adventure.  Most stay on their cruise ships and look at the landscape from afar, but a small number are permitted to dock to go exploring with guides.

With the temperature so low, you'd expect people to stay inside most of the tme, right? Or at least keep their clothes on?

The rest of the post is on Small Town Beefcake
Posted by Boomer No comments: Links to this post

Beefcake, male bonding, and gay symbolism in the movies, tv programs, books, toys, and comics of a Baby Boomer childhood. Some autobiographical stories and stories about beefcake around the world.
No profanity, insults, anti-gay slurs, name-calling,or homophobia allowed.
Most photos are taken from the internet and assumed to be public domain. If you own a photo and want it taken down, let me know in a comment.
Check out my other blogs:
Tales of West Hollywood
Small Town Beefcake