Depression-Era pulps often invoked the unimaginably ancient and unimaginably decadent civilizations based vaguely on the Orient: the cities all warrened with harems, opium dens, dungeons,  lairs, and oubliettes; the rulers all fat, bejeweled, and lecherous; the people childlike; the laws brutal; the religions by turns esoteric and superstitious: the distant past worlds of Hyperborea and Atlantis, the distant future world of Xiccarph, or the aging jungle-cities of Mars. 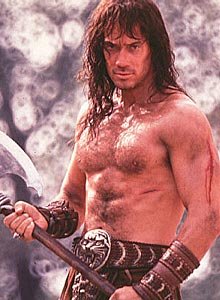 Placing Adventure Boys in realms of Oriental myth allowed for a lushly sensual homoromance.  In H.P. Lovecraft's "Quest of Iranon”(1921), a young man wanders a stern, unfriendly world in search of the city of Aira, where there are “men to whom songs and dreams. . .bring pleasure.”  He meets “a young boy with sad eyes” who also dreams of escape, to a city where  “men understand our longings and welcome us as brothers, nor even laugh or frown at what we say.”    They travel together, happy in a way yet always longing.  They grow old together and finally die, never finding their true home. 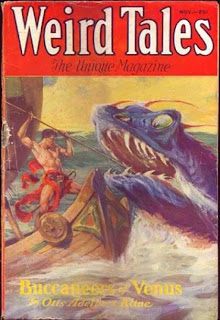 Fellow muscle men appeared only as bullies, cads, or at best, untrustworthy companions who ended up betraying the hero -- except when the barbarians are teenagers rather than men. Then they rescue no naked women, and their same-sex bonds are true.

Robert E. Howard’s Conan the Barbarian spends his seventeen stories in Weird Tales rescuing the requisite naked woman and being betrayed by men, except in the only story set in his adolescence, “The Tower of the Elephant” (1933).   About sixteen years old, a “tall, strongly made youth” with “broad, heavy shoulders, massive chest” and so on, Conan sneaks into the Tower of the Elephant with the hope of stealing a fabulous jewel hidden there.  At this point, plot conventions decree that he find a naked woman.  Instead, he finds a naked man.

An alien named Yag-kosha, elephant-headed but otherwise human, has been blinded, crippled, and imprisoned in the tower by an evil sorcerer.  They become friendly, and Yag-kosha asks Conan to rescue him through the strange-sounding expedient of cutting out his heart.  Conan never hesitates about killing monsters and enemies, but he will not kill a friend, and complies only when Yag-kosha assures him that he will not die.  In fact, he uses the magic of the heart to take revenge on the evil sorcerer, and then, restored to his original strength and beauty, he jubilantly flies away to join his companions on his home planet.

This story is fascinating because it precisely mirrors the adventures of the adult Conan, only transformed from hetero-erotic to graphically homoerotic.  In the shimmering tower, the adult Conan would find a female object of desire (naked, beautiful, benevolent) contrasted with a male threat (clothed, hideous, evil).  However, the teenage Conan finds a male, both object of desire (naked, benevolent) and threat (blind, crippled, aged, with a hideous face “of nightmare and madness”).  Then ritualized death and resurrection removes the threat, leaving only desire: Conan perceives the new Yag-kosha as beautiful.

Even the hints of heterosexual intimacy that the adult Conan often enjoys with the naked ladies he rescues  are mirrored when the naked Yag-kosha gets to “know” Conan by caressing his chest and shoulders with his soft phallic trunk: “its touch was as light as a girl’s hand,” Howard tells us, suggesting a tender, gentle sexual congress.  Conan’s desire here is for the male, a yearning for masculine intimacy that must be sublimated beyond all recognition among the adults in Cimmeria but can be expressed freely, with only a veneer of euphemism, during the paradox of youth.

Ocean Girl and her Beefcake Buddies 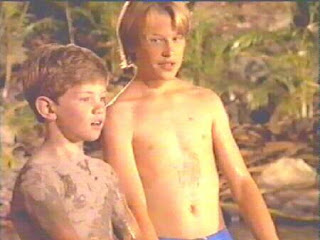 The Australian science fiction series Ocean Girl (1994-98) appeared on American tv in the late 1990s, along with such beefcake-heavy Australian sci-fi as Round the Twist, Ship to Shore, Skytrackers, and Spellbinder.  It featured Jason Bates (David Hoflin, right) and his brother Brett (Jeffrey Walker, left), who move to an underwater research facility  called ORCA, off the coast of Queensland,  with their mother, a whale specialist.

They befriend the mysterious Neri (Marzena Godecki), who has super powers, an affinity for the ocean, and a pet whale. 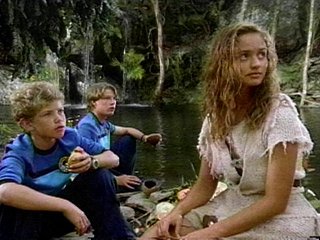 When they tired of plotlines about saving ocean critters from an evil corporation, Neri revealed that she was an alien who crashed on Earth when she was a child.  Eventually they found her sister Mera. 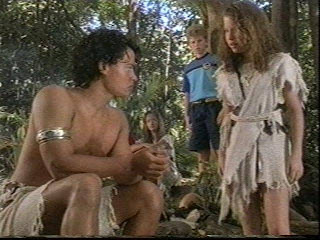 Then they found the crashed ship with some survivors in suspended animation, notably the pilot's son, Kal (Jeremy Angerson), who apparently zapped through space without wearing a shirt.

Before the series ended, Neri and her Scooby Team were  globetrotting, time traveling to ancient Egypt, and even exploring the home planet of Ocean World. 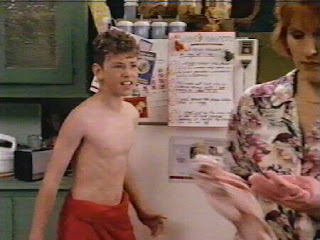 Shirtless and semi-nude shots were everywhere. Jason, Brett, and Kal spent almost as much time in swimsuits, towels, and underwear as Bud and Sandy of Flipper.  Not to mention the ever-changing adult and teenage crew members of the ORCA.

No gay characters, but minimal heterosexual entanglements.  Jason is sweet on Neri, eventually kissing her, but Kal  seems more interested in Jason, and Brett doesn't express much romantic interest at all. 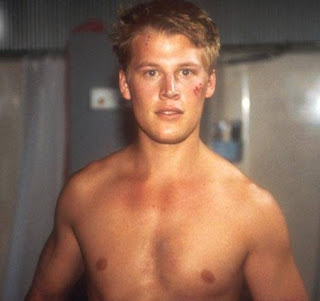 As the seasons passed, David Hoflin developed a stunning bodybuilder's physique, which he showed off frequently, even after the series ended.  He has been featured on the Flipper tv series, The Lost World, Head Start, Neighbours, Alcatraz, and NCIS. 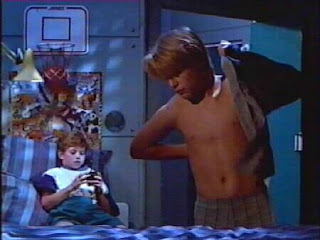 La Gran Aventura: Two Boys, a Boxer, and a Bull 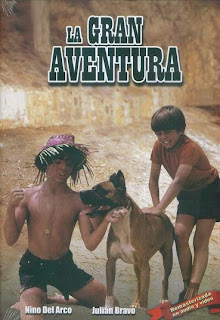 Speaking of Nino del Arco, he was an accomplished child star in Mexico before he starred in Kaliman, but I've seen only one of his movies, La gran aventura (1969), on Telemundo during the 1980s (about the same time that I was watching Santo, Los Beltran, and  Papa soltero). 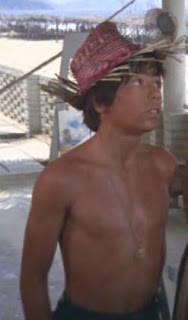 The plot: the effervescent Jacky (Julian Bravo, left) agrees to help the timid Pepe (Nino) search for his lost dog.


On the way they have many picaresque adventures, including run-ins with a bull and gangsters.  Meanwhile their parents are frantically searching for them. 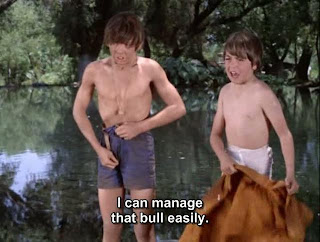 Unfortunately, I was 15 years too late.  If I had seen it as a preteen in the 1960s, the significant beefcake and bonding would have rivaled that of Skippy the Bush Kangaroo, transforming Mexico into a "good place."

1. Beefcake: there are many shirtless shots of rather muscular Jacky, and a skinny-dipping scene involving both boys. 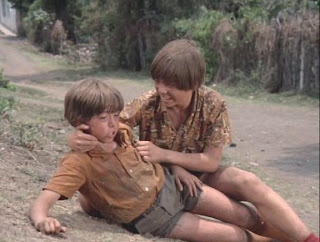 2. Bonding: Jacky meets Pepe as a stranger and displays a remarkable interest in him, aggressively courting him, running head-first into danger to protect him.  In the end they decide to stay together forever. 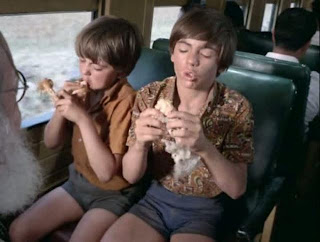 Julian Bravo remains popular in Mexico, starring in a variety of films, from the religious (First Communion) to the not religious (The Difficult Life of an Easy Woman).  Most recently he was featured as Guillermo on the telenovela Salome.  Nino del Arco retired during his adolescence, and now works as a lawyer in Madrid.
Posted by Boomer No comments: