Spaceship Under the Apple Tree 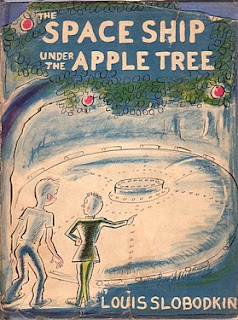 A boy scout named Eddie Blow meets Marty, an alien boy his own age, and exclaims "Let's be friends."  Marty doesn't know what "friend" means, so Eddie shows him.

They become involved in the search for Secret Power Z, which will allow Marty to return to his home planet.

There were four sequels, but I never encountered them. 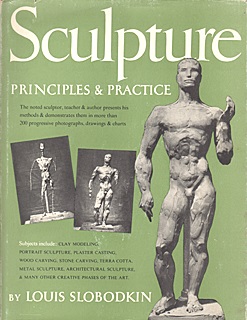 That's all I knew about Louis Slobodkin until I stumbled upon his  Sculpture: Principles & Practices (1973).  The attention to the male form was striking.

Born in 1903, Louis Slobodkin wrote over 50 books, mostly children's books, including One is Good, But Two Are Better (1956), Melvin the Moose Child (1957), and Luigi and the Long-Nosed Soldier (1963).  They sound like male friendship is emphasized, making them part of the repertoire of gay kids.

He was also an illustrator, and of course a sculptor who specialized in the male form. 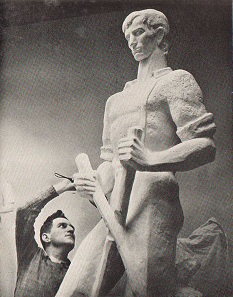 His most famous piece was a plaster statue of "Young Lincoln," which was displayed at the 1939 World's Fair.  It was destroyed, but there's a replica in Lincoln, Nebraska, and a bronze copy at the Department of the Interior Building.

Could he have been gay?  Maybe, maybe not.  Same-sex friendships were commonplace in children's fiction before the 1980s heterosexualization of childhood, and he was married to children's book writer Florence Gesh. But that statue of Lincoln with a massive chest and phallic hoe. . . .
Posted by Boomer No comments: 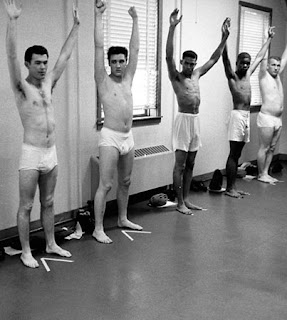 In 1942, the U.S. government refused to draft 22-year old movie star Mickey Rooney, and asked him not to enlist, reasoning that he could help the war effort more effectively by making movies to raise morale. But by 1958, times had changed; or maybe it was because 22-year old Elvis Presley, the most famous singer in the new genre of "rock and roll," was universally despised by the older generation.  So he was drafted into the army.  He served in spite of the thousands of agonized protests by fans, and recorded no songs for two years, though he did provide a number of underwear shots from his induction.

Bye, Bye, Birdie, a Broadway musical about the experience, and about Madison Avenue, teeny boppers, and greed, followed in 1960.  I saw the 1963 film version on tv sometime in the early 1970s, and was immediately entranced by the unexpected beefcake. 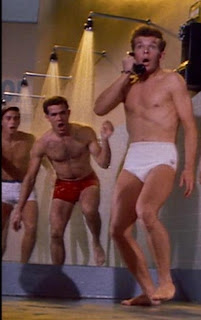 The plot, however, completely ignores Elvis' attraction to both male and female fans.  Conrad Birdie (Jesse Pearson) sings only to girls, and only girls swoon over him. The boys sing, in unison, "We hate you, Conrad!"  The conflict comes when  teeny-bopper fan Kim (Ann-Margret) is chosen as the object of Birdie's farewell performance.  Her boyfriend Hugo (played by real-life teen idol Bobby Rydell) is jealous.

And that's all.  Girls swooning, boys snarling.  Songs like "How Lovely to be a Woman" and "One Boy."

Even Paul Lynde, who managed to make many of his characters gay-vague even when they were middle-aged suburban husbands, fails here.  His "Kids" is a litany of complaints that parents would have against their children through the 1970s.

But that's not enough to make a dent in the heterosexism.

James Royce Edwards starred in the Broadway revival.
Posted by Boomer No comments: