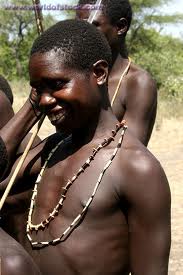 Outside of the Republic of South Africa, sub-Saharan Africa today is more homophobic than the worst of the 1950s Dark Ages in America: "kill the gays" bills, gay organizers imprisoned, President Mugabe's "worse than dogs and pigs" speech.  By official policy, no Africans are gay, except maybe a few brainwashed by perverted Westerners.

But neither intense homophobia nor the belief that no native gay people exists preclude gay symbolism.  Things Fall Apart (1958), by Nigerian writer Chinua Achebe, who died last week, is the first African novel to receive a wide readership in the U.S.. And a classic study of homophobia. 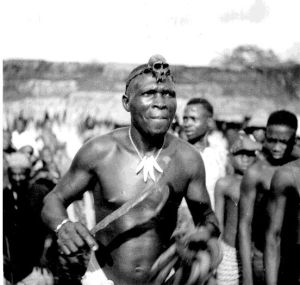 His father, Unoka, was fond of music and language, lazy, indolent, sophisticated, neglectful of his wives and children; in other words, gay-vague, and Okonkwo is terrified that he might end up "that way," too.

Okonkwo is made guardian of Ikemefuma, a boy prisoner from a rival village, and grows fond of him.  But when the village oracle says that the boy must die, Okonkwo does not hesitate to deliver the killing blow, even as the boy is calling him "father." 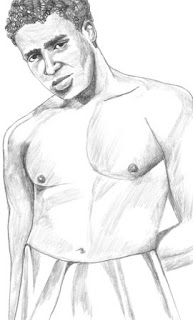 Okonkwo doesn't mind his daughter Ezinma playing boys' games and rejecting marriage, but he is horrified by his son Nwoye, who is gentle, kind, and artistic, fond of music and poetry.

When Nwoye is "recruited" by Christian missionaries -- representatives of a soft, feminine, gay-coded religion -- Okonkwo considers it the ultimate betrayal, and disowns him.

The white people and their effeminate Christianity continue to encroach on his village, trying to turn "real men" into "sissies." Okonkwo kills one of the white "sissies," and then realizes that he will be tried in colonial court for the murder. That would be the ultimate humiliation, so he decides to commit suicide instead.

No one in the novel openly expresses same-sex desire.  But we can find ample gay symbolism in the hyper-masculine fear of the feminine "other."
Posted by Boomer No comments:

In 1966, teens were listening to the new age of rock: "California Dreamin'", "Paperback Rider," "The Last Train to Clarksville."  The adults were listening to "Tiny Bubbles," a slow, lethargic audience participation song seemingly designed for cocktail lounges at 3:00 am, when the singer is drunk and the audience too tired to care:

The singer was a 36-year old Hawaiian named Don Ho (no relation to the Vietnamese singer),  who in fact wasn't drunk, but had been performing at his mother's night club, Honey's, since 1959.  "Tiny Bubbles" stayed on the charts for 17 weeks, and propelled him into stardom. 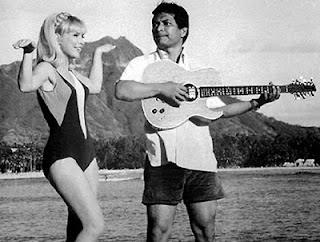 He performed on The Joey Bishop Show, The Glen Campbell Goodtime Hour, The Hollywood Palace, and Laugh-In.  He had his own daytime tv series.

He appeared as himself on The Brady Bunch, Batman, I Dream of Jeannie, almost every tv series with an episode set in Hawaii (long after his heyday, he was still appearing as "himself" in Hawaiian-themed tv episodes, from Charlie's Angels to Life Goes On). 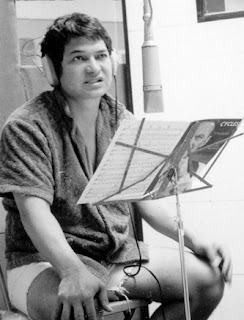 The adults loved him.  His fans included Lucille Ball, Sammy Davis Jr., and Judy Garland.  Teens didn't know what to think.  Was he an asexual Asian Uncle Tom, or the first Asian sex symbol?  Was he perpetuating trite stereotypes (hula dancers wearing leis in tiki bars), or was he celebrating his Hawaiian heritage?

Gay teens were especially perplexed; here was a man surrounded by ladies, but with decidedly gay-coded mannerisms. Who sang "Lovely Hula Hands" but employed hunky male back-up singers.  Was he a Hawaiian Liberace in pink sunglasses, hiding same-sex desire behind a glittery facade?

Probably not. He was married for 40 years, and had 10 children.  But he did share the stage with Judy Garland.
Posted by Boomer No comments:

The Big Valley: The Gay Connection

I never saw The Big Valley (1965-69); it was on past my bedtime, or we watched Carol Burnett instead.  But you could hardly miss the commercials crowded with musclemen poured into their slacks -- with obvious gifts beneath the belt -- set to a rousing theme song with an elderly lady saying "Show us what you inherited from your father!  Show us some of Tom Barkley's guts!"

The elderly lady was Victoria Barkley (lesbian actress Barbara Stanwyck, who starred in Double Indemnity with Fred MacMurray), owner of a large California ranch in the 1880s.  She had four sons and a daughter, whose squabbles formed most of the plots.

Barbara Stanwyck and Rock Hudson starred together in several movies during the 1950s, such as All I Desire (1953), and were still close friends.  Coincidentally, most of the other actors in the cast had a Rock Hudson connection. 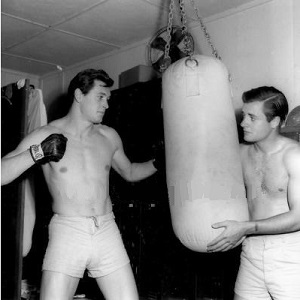 1. Richard Long (right) played eldest son Jarrod, a calm, sensible attorney.  A friend of Rock Hudson (left) and a regular at gay talent agent Henry Willson's parties, he was long rumored to be gay.  He later played gay-vague on Nanny and the Professor. 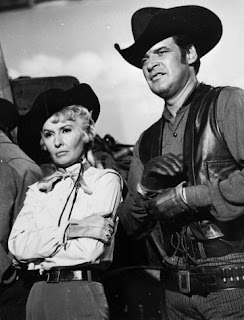 2. Peter Breck played hot-headed Nick, who always wore black and was always getting into fistfights.

3. Linda Evans, who played Audra, who would go on to star on Dynasty.  In 1984, she made headlines when she kissed Rock Hudson on camera, and then discovered that he had AIDS (in those days people thought you could contract it by kissing).

4. Youngest son Eugene, studying medicine at Berkeley, appeared in eight first-season episodes and then was written out. He was played by Charles Briles, who starred with Rock Hudson in Send Me No Flowers. 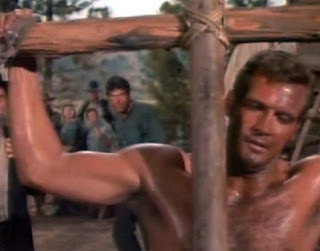 5. Heath, the illegitimate son of Victoria's late husband, who had to literally fight to be accepted by his half-siblings, was was played by Lee Majors, later the star of The Six Million Dollar Man and The Fall Guy.   Majors was discovered and mentored by Rock Hudson, but upon becoming a big star, cut off all contact.  When Rock was outed as gay, Lee's publicist insisted that the two never knew each other.
Posted by Boomer 5 comments: