A Gaggle of Shirtless Jeremys 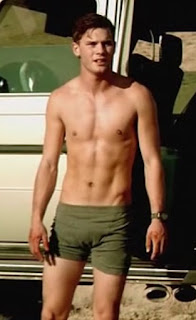 Somebody found this blog using google search terms "Jeremy naked."  Jeremy who?  The only Jeremys I have posts about are Jackson and Lelliot.  But, just for fun, I put "Jeremy shirtless" into google images to see who popped up.

1. Jeremy Irvine of Stonewall, with his ridiculously huge bulge.  What's he packing, about four rolled-up socks? 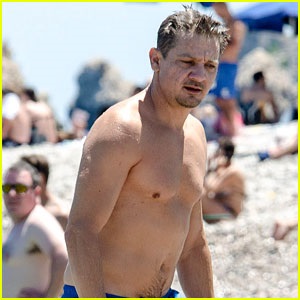 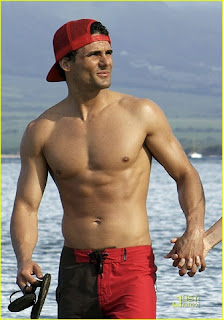 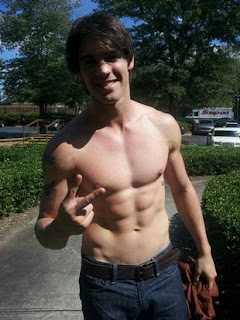 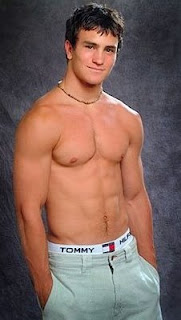 5. Jeremy Bloom, a football player and Olympic skiier.  No wonder I never heard of him.

Paul Newman and Rocky Graziano: Somebody Down Here Likes Me 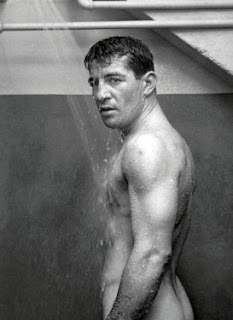 Paul Newman and James Dean met in 1952, when they were studying at the famous Actors Studio in New York.  They began a passionate affair.

But there were problems from the start: Paul didn't like sneaking around under the nose of his wife, and he wanted exclusivity, whereas Jimmy had a roving eye (Paul had the same problem when he dated Yul Brynner a couple of years before).

In 1953, they both auditioned for the roles of the twin brothers in East of Eden -- check out the homoerotic screen test on the Eddi Haskell blog.

Jimmy got the part, but Paul lost out.  He was devastated, and the relationship cooled. 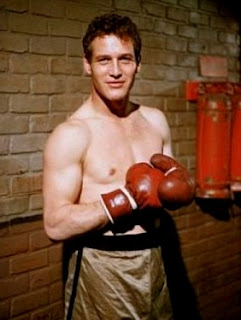 After James Dean's tragic death on September 30, 1955, Paul was offered several roles that had been earmarked for him, including  Somebody Up There Likes Me (1956), a biopic of boxer Rocky Graziano (top photo) based on his bestselling autobiography.

It was a Hollywood rags-to-riches story, with a juvenile delinquency twist.  The young Rocky is abused by his father, joins a street gang, gets into fights, is drafted into the army but goes AWOL, is sent to prison, finds a new life as a boxer, and finally triumphs over an evil rival (real boxer Tony Zale). 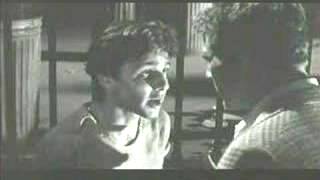 Oh, and there's a requisite hetero-romance, but there's a strong gay subtext between Rocky and best buddy Romolo (gay actor Sal Mineo), plus the gay symbolism of a blackmail plotline. 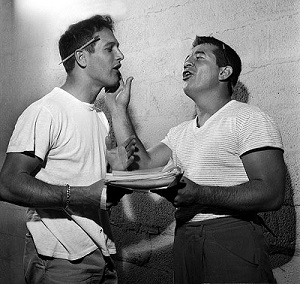 The story doesn't end there. The real 37-year old Rocky appeared as an adviser, and he and Paul hit it off. They were often seen socializing together off the set.

I couldn't find any information on whether they became lovers, but since Rocky also hung out with the bisexual Marlon Brando, it's a possibility. 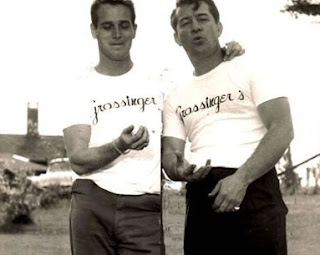 The t-shirts are from Grossinger's Resort in the Catskills.

Paul went on, of course, to become the most famous actor of the 1960s and a master of gay subtexts.  Rocky Graziano had a respectable tv career and opened a restaurant. 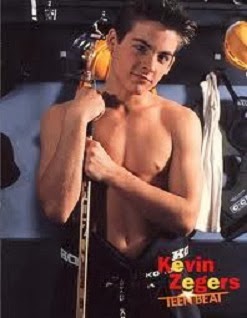 Only a few teen idols have achieved such fan accolades that there are websites devoted to detailed descriptions of every scene of every movie, tv, and theatrical appearance.  Luke Halpin of Flipper.  Jonathan Taylor Thomas of Home Improvement.  And Kevin Zegers.

By 2000, Kevin had muscled up and was thoroughly established as a teen beefcake star, in spite of the lack of a weekly series (not counting the teen soap Titans, which only lasted for 13 episodes). 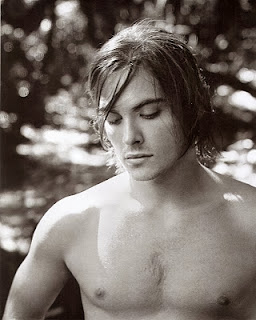 
The Incredible Mrs. Ritchie (2004): a troubled teen befriends an elderly woman and doesn't get a girl. 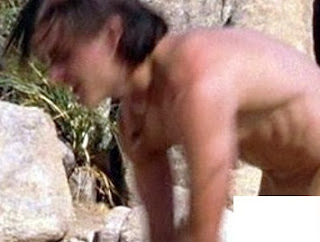 Transamerica (2005): a gay hustler goes on a road trip with his biological father, a MTF transwoman, and oddly enough gets a girl.  (Movie producers believe that gay men, like "all men," fall in love with women.)  But at least he gives a glimpse of some impressive frontal nudity.

It's a Boy-Girl Thing (2006): a boy and a girl, next door neighbors, swap bodies. Woody (Kevin Zegers), inhabited by a girl, likes boys, and is mistaken for gay. 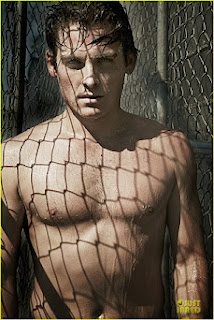 Although he also plays a lot of heterosexual characters: his Damien in Gossip Girl (2009-2011) is into both Serena and Jenny, and his Vampire (2011) only drinks the blood of suicidal young women.

Not a lot of buddy-bonding roles, but The Colony (2012), about the survivors of a new Ice Age, is worth a look for the bond between two men (Kevin, Lawrence Fishburne) answering a distress call from another colony.

I haven't seen The Mortal Instrument: City of Bones (2013). In the original paranormal young-adult novel, Alex is gay.  But knowing Hollywood's skittishness about letting juveniles know that gay people exist, I wouldn't be surprised if in the movie version, he's gay-vague, or straight.

The Gay Photographer in Eastern Kentucky 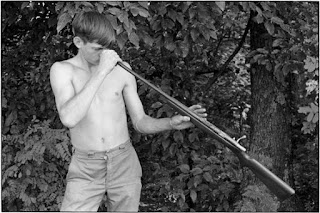 In 1964, gay documentary photographer William Gedney, known for documenting the Bohemian subcultures of New York and San Francisco,  traveled to the Blue Diamond Mining Camp in Pike County, Eastern Kentucky, about 60 miles from where my mother's family lived.

He wrote that he was looking for poverty and despair at the collapse of the mining industry, the "mental and physical depression of the people, almost complete lack of future and hope" 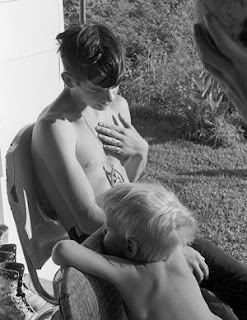 He met Willie Cornett, recently laid off from the mine, and ended up staying with Willie, his wife Vivian, and their twelve children in Big Rock, Kentucky.

He found poverty and pain, but not a "lack of future and hope."

He found resilience and strength and beauty. 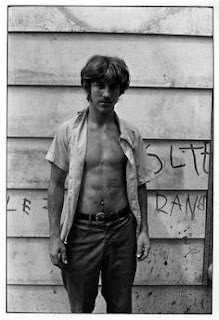 And, a thousand miles away from the gay community of New York, a blatant homoeroticism. 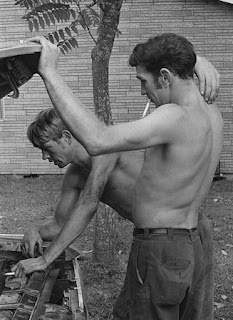 Photographs from his days with the Cornett family were displayed at a one-man show at the Metropolitan Museum of Modern Art in 1968 and 1969. 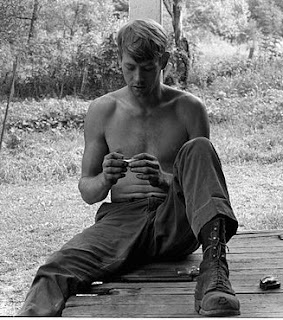 Gedney stayed in contact with the Cornetts, and photographed them again in 1972.

He didn't publish the photographs during his lifetime, except for one of the girls in the kitchen, for $35. 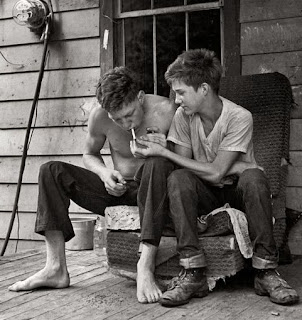 They were private, depicting the unexpected joy he found in the hills of Eastern Kentucky. 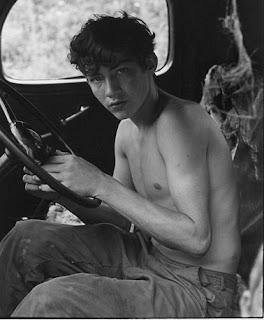 Gedney died of AIDS in 1989.  Today his reputation is based chiefly on the moments he captured in the Kentucky photographs.