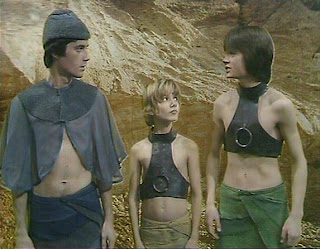 During the "British invasion" of the 1970s, I got a taste of British science fiction on PBS: Doctor Who, The Tripods, Timeslip, The Hitchhiker's Guide to the Galaxy, Space: 1999, UFO, and The Prisoner.  One of my favorites was The Tomorrow People (1973-79), about children who are different.  Like the X-Men in comics, they are the next stage of human evolution, with telekinetic, teleportation, and telepathic powers (which allows them to communicate with aliens from all over the galaxy).  They work out of the Lab, in an abandoned London underground station, where they hide from the baddies who want to hurt them, fight various threats, and keep a watch for other Tomorrow People who are "breaking out" (recognizing their identity).

The gay symbolism is obvious: children realize that they are different, but must keep their identity a secret. 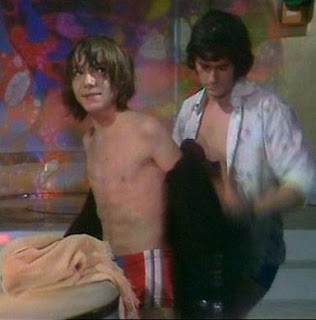 Stephen and John remained paired through Season Four (1975-76), as other Tomorrow People came and went with the frequency of Doctor Who's mortal companions. 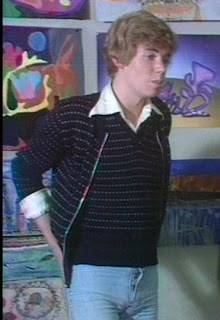 There were also lots of other kinds of "different" kids.  Robert (Jason Kemp), for instance, belonged to the alien Denagelee race, who hatch from eggs, releasing enormous energy (last time they hatched, the Roman Empire fell).

15-year old Mike Holoway (right), well known in Britain as the drummer of the teen group Flintlock, joined the series in 1975, playing muscular rocker Mike.  His popularity led to the dismissal of Peter Vaughan-Clark; when Season Five began, Stephen was absent without explanation. 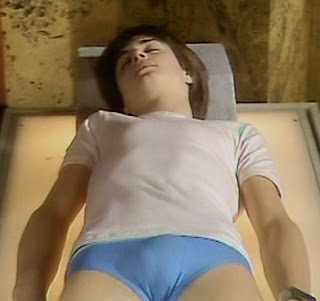 Mike frequently expressed heterosexual interest, but his constant shirtless, swimsuit, and underwear shots made up for it. He remained the central character until the series ended in 1979. (It was revived with new casts in 1992-95 and 2001-2007). 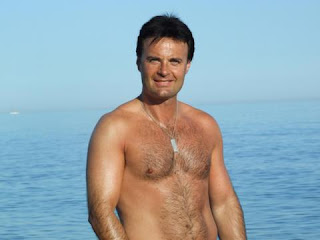 Mike Holoway is still a recording artist, and his numerous musical stage roles, such as Joseph and the Amazing Technicolor Dreamcoat and Godspell, provide substantial beefcake.

The Battle of the Nude Men 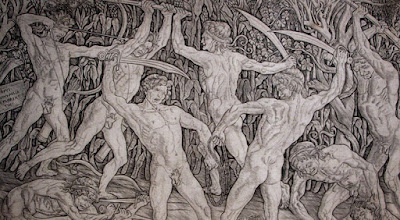 More evidence that artists generally draw nude men only when they're about to kill each other:

I found this painting at the Art Institute of Chicago.  The heavily-muscled men are naked, grimacing as they go at each other with scimitars.

It's actually called "Battle of the Nude Men", the only surviving engraving by Renaissance goldsmith and sculptor Antonio del Pollaiolo (1429-1498). 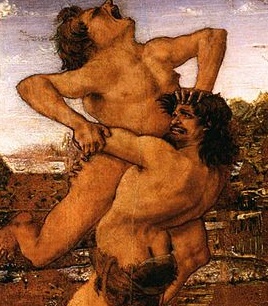 Pollaiolo painted other men grimacing in the heat of battle, like Hercules and Antaeus.  As part of his 11th Labor, Hercules had to kill the half-giant, but he couldn't throw or pin him, so he bear-hugged him to death.

And shows a nice butt crack. 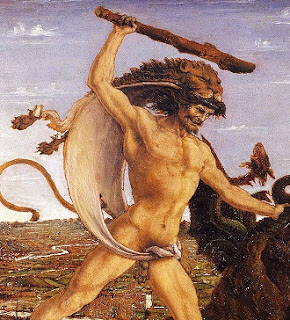 Hercules and the Hydra pits the muscleman against the monster with multiple heads; every time you cut one off, two grow up in its place.  Unfortunately, a swatch covers his penis. 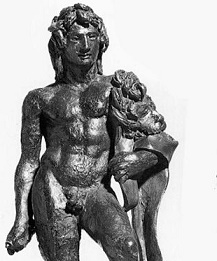 Pope Sixtus IV, who has been rumored to be gay, was his biggest patron.  When he died, Pollaiuolo was conscripted to design his tomb.

Pollaiuolo died unmarried, and was buried next to his brother.

History doesn't tell us if he was gay or not, but I'm going to go with probably. 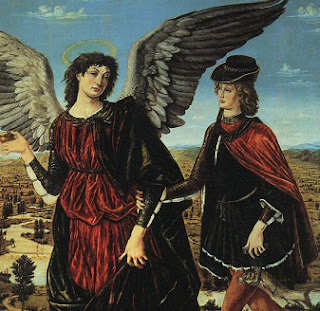 Look at "Tobias and the Angel."  They're not naked, but have you ever seen such a feminine Tobias in such an intimate pose?

Li'l Abner, the Musical: Gay Anxiety in the Cold War 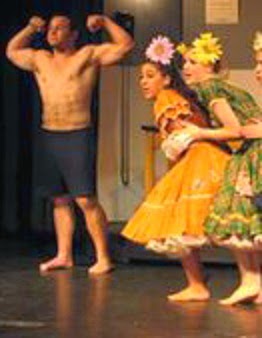 1. It was based on the popular comic strip which featured a super-muscular, often semi-nude hillbilly from Dogpatch, U.S.A.

2. The plot involves Yokumberry Tonic, invented by Li'l Abner's mother, which the government wants to use for national defense, as it transforms ordinary men into super-muscular bodybuilders.

Unfortunately, it also erases their interest in women, addressing the common 1950s stereotype of the bodybuilder as gay, plus anxieties over gay soldiers, some 40 years before "Don't Ask, Don't Tell." 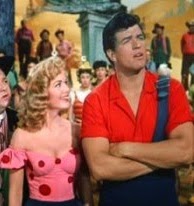 But actually, beefcake is rather limited.

Li'l Abner wears a red flannel shirt that displays nary a bicep. 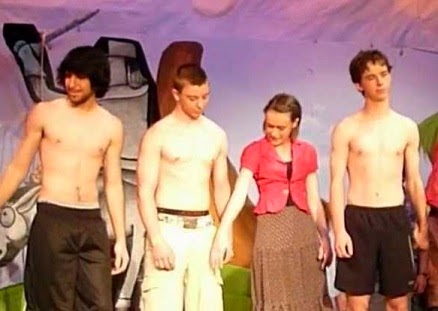 The movie featured a parade of bodybuilders, formerly scrawny hillbillies (Ken Ackles, Eric Alden, Nick Dimitri, Brad Harris, Gordon Mitchell), ignoring their wives, who in desperation sing  "Turn them back the way they was!"

But stage versions of the song tend to be less generous. 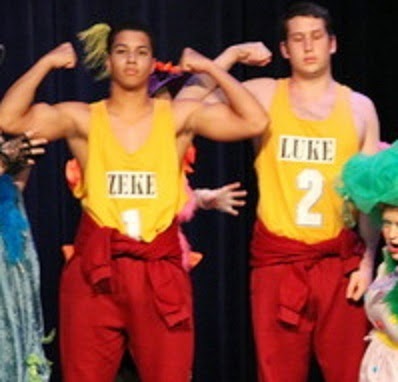 I guess there aren't a lot of bodybuilders to go around in college drama departments and community theaters.

But you should see it anyway, for the Cold War gay symbolism. 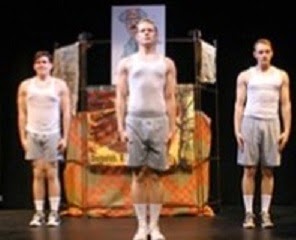 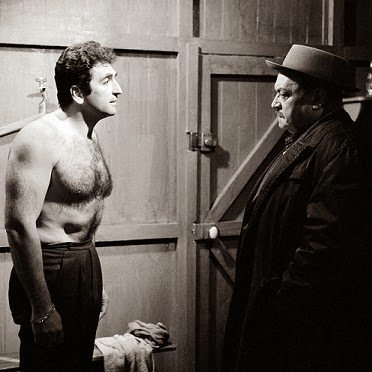 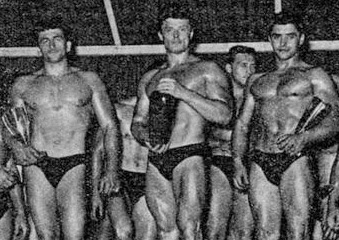 He began flexing his muscles in comedies in 1952.

In La tournée des grands Ducs, about a Russian duke visiting Paris (1953), he played "an Attraction" at the Balajo Nightclub.

In Peek-a-boo (1954), about a small-town police officer investigating a strip show, he played "L'homme musclé" (the Muscleman). 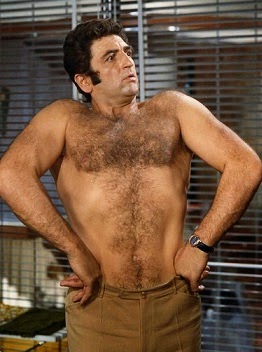 Many more muscle-flexing comedies followed: Plus de whiskey pour Gallaghan, Naughty Girls, Anyone Can Kill Me, Les Tortillards (The Trains).

In 1958 he created the role of gay-vague masseur Philippe Dubois on stage in Oscar, about a businessman who suffers from chaotic calamities during a very bad day.  He returned to the role in the 1967 movie version, and on stage again in 1971.  (Sylvester Stallone starred in an American version in 1991).

There are a few thrillers and dramas on Mario's resume, but even then he often played comic relief parts.  He starred as Paul Riotard in a 1965 episode of the police procedural Les cinq dernières minutes (The Last Five Minutes) (top photo). But the episode, entitled "Hunting Frogs," is about a diver assassinated by an underwater missile (top photo).  You can see the entire episode on youtube. 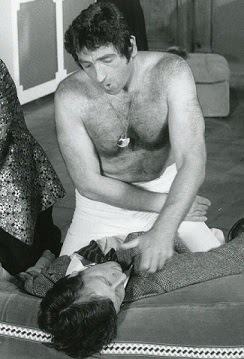 Mario played gay-vague musclemen in several comedies with film great Jean-Paul Belmodo, such as Up to His Ears (Les tribulations d'un Chinois en Chine, 1965) and Le Magnifique (1971), released in the U.S. as How to Destroy the Reputation of the Greatest Secret Agent.

In the farce Le gendarme et les extra-terrestres (1979), a bumbling police inspector tries to stop the invasion of aliens who drink oil and sound like empty garbage cans when you touch them.  Mario plays "the Oil Can Thief."

And on like that through his career, which was substantial -- over 100 movie and tv roles -- and won him many accolades.  But throughout his physique was played for laughs.

Circus World: Beefcake and Bonding on the Flying Trapeze 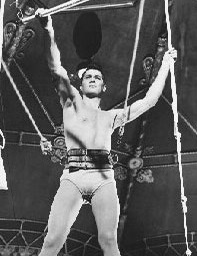 My grandmother took me to a circus once.  Creepy clowns, leering acrobats, a lady in a stripper costume riding an elephant.  Bleachers full of scared little kids and bored older kids whose grandparents were demanding, "Isn't this better than television?"

Maybe a hundred years ago, before tv, radio, movies, and comic books, kids looked forward to the traveling circus, but by the 1960s, it was a relic of the long-forgotten past.

Yet oblivious adults kept insisting that going to the circus was a glorious adventure, the past far superior to the present. 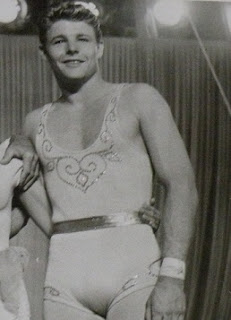 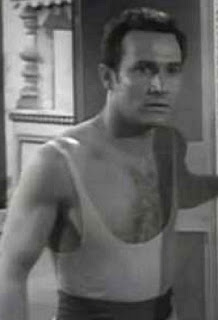 Episodes of Alfred Hitchcock Presents (with Brandon DeWilde and the extremely muscular Larry Kurt, left), The Wonderful World of Color, Leave It to Beaver, Ozzie and Harriet, Father Knows Best, and The Wild Wild West.


We generally stayed away, though sometimes gay kids found them worth a look, if only for the bulges in tight leotards 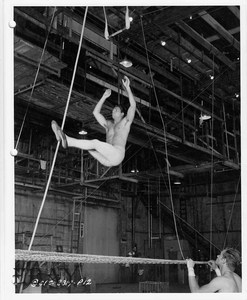 And for some beefcake not elsewhere available, as with Rian Garrick in The Flying Fontaines.   He appeared on-screen only nine times, between 1959 and 1966, and displayed his muscular physique only once. 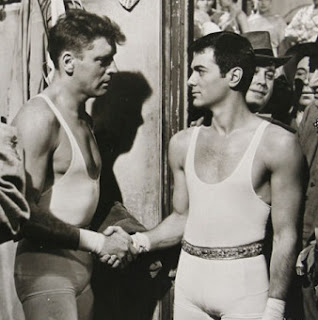 And the plotlines usually articulated establishment anxiety over the younger generation by having a brash young novice perform trapeze acts much better than a seasoned professional.  The competition often led to romantic triangles or a homoerotic subtext, as between Tony Curtis and Burt Lancaster in Trapeze.

Of course, 1950s it-boy Tony Curtis managed to infuse every movie and tv appearance with a homoerotic subtext.

By 1966, the circus craze was over, though the media still paid attention to teen idol trapeze artists like Jimmy Cavaretta.

A Different World: Angst and Beefcake at a Black College 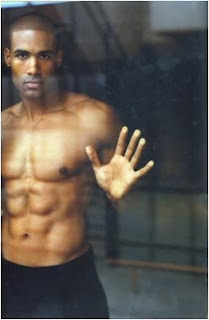 Different World (1987-1993) was a spin-off of The Cosby Show (1984-1992), the blockbuster warmedy about a African-American family in a world where poverty and racism were topics of history lessons, thanks to Fearless Leader Ronald Reagan.  It sent daughter Denice (Lisa Bonet) off to her parents' old alma mater, the elite, historically-black Hillman College in Virginia, where she is surrounded by quirky classmates: 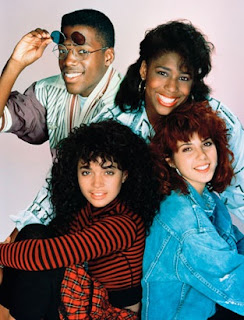 The flighty Maggie (Marisa Tomei), because producers worried that white viewers wouldn't watch an all-black show (there were also lots of white students in crowd scenes).

The plotlines were silly and lighthearted, perhaps again to reassure viewers that this was pure escapism, with no serious social issues:

Denise has to wear a pig nose as punishment for being messy
Dwayne becomes a dj at the campus radio station
Denise mistakenly thinks that her geology professor is interested in her
Dwayne becomes a contestant in the Miss Hillman pageant. 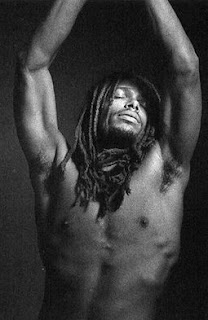 After the first season, Lisa Bonet announced that she was pregnant, and was written out (her character returned to The Cosby Show to hide behind furniture).  Assured of an audience, the producers eliminated Maggie and the white background characters to make Hillman all-black.

And the tone changed dramatically.  No longer lighthearted, this was a somber drama with a few one-liners.  Life was hard, a constant struggle.  You had to cling together, and keep on keeping on:
Basketball star Garth Parks (Taimak) tries to rape his girlfriend.
A rapper (Edafe Blackmon) is abusing his girlfirend.
Shazza Zulu (Gary Dourdan) writes a book criticizing black men for not controlling their women.
A exhibition of "Mammy" images raises students' ire.
A new student has AIDS

And there was racism, a constant in the lives of faculty and students alike, a pernicious force that threatens to drain their spirits:
Racist slurs are painted on Ron's car.
Whitley is followed around in a store to make sure she doesn't steal anything.
Dwayne loses out on a job to a less-qualified white candidate. 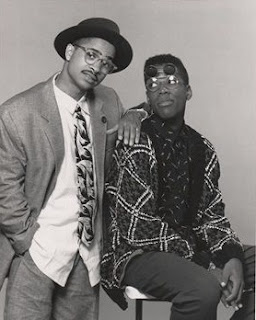 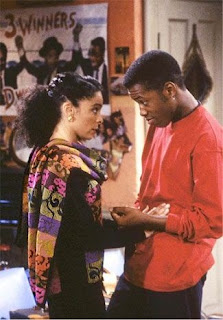 Existing characters changed:
Whitley became the focus, a privileged, sheltered rich girl being exposed to the struggle of everyday life for the first time.

Dwayne, now her boyfriend, was no longer a happy-go-lucky jokester, but somber and serious, buffeted about by adversity.

Eventually they marry, and honeymoon in Los Angeles, just in time for the Rodney King riots and a discussion of police targeting of African-American men.

They can't get a break. 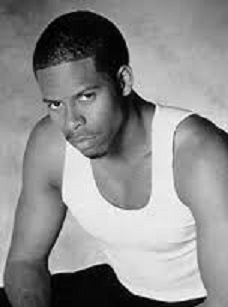 As with most tv shows in the 1980s, there were no gay characters, or any reference to gay people at all, but a gay-subtext romance could be found between Dwayne and Ron.

But there were lots of hot actors on the show, and occasional t-shirt or gym-shorts scenes to pique the imagination.

The top photo, by the way, is what pops up on Google Images when you search for "Kadeem Hardison shirtless."  I'm pretty sure it's not him.
Posted by Boomer No comments: