You also get this picture.  But as far as I know, Saki was never a professional wrestler.  He was a writer of the aesthete-decadent school, along with Oscar Wilde and Kenneth Grahame. &nbsp;His savagely humorous stories critiqued Edwardian society, especially the glorification of the heterosexual nuclear family.

His most famous story is "The Open Window," about a girl who tells a visitor that her father and brother died in a hunting accident three years ago, but her deranged mother always leaves the window open for them, believing that they are coming home. &nbsp;Then the visitor sees them walking across the yard!  I read it as a kid, in a collection of ghost stories, and thus didn't realize that the girl was playing a joke.

You probably didn't know that Saki was gay. &nbsp;Wikipedia demurs, as usual, saying that he may have been gay, but there's no doubt about it.  He took his pen name from a cupbearer in the Rubayat of Omar Khayyam: a beautiful youth, the object of desire.  He introduced a pair of coded gay characters, Reginald and Clovis.  He liked cruising. According to his biographer, he had a hookup every two days, or if he was especially busy, every three days.  That's a lot more action than anyone gets today. &nbsp;Cruising must have been a lot easier then.   See also: The Wind in the Willows.
Posted by Boomer 1 comment:

Like Rob Lowe, Jason Priestley became famous for a wardrobe malfunction; while frolicking naked on the beach with Jerry O'Connell and Gabriel Olds in Calendar Girl (1993), he turned suddenly, and everyone in the world got a glimpse of a frontal.            Not that you really needed a nude shot to notice his superheroic endowment.  Born in 1969, Jason had guest spots on MacGyver, Danger Bay, Teen Angel,&nbsp;and 21 Jump Street, plus a year-long story arc on Sister Kate, before hitting it big on the teen soap&nbsp;Beverly Hills 90210 (1990-2000).         He played Brandon Walsh, a cleancut Minnesota boy who moves to Beverly Hills and experiences culture shock among the rich kids. &nbsp;For ten years, he provided the stable center to the teen and post-teen angst of Luke Perry and Brian Austin Green. &nbsp;After graduation, he got to big-brother several gay teens as they faced issues involving coming out, homophobic harassment, and even dating.  Meanwhile his movie career took off, starting with the teen sex comedy Calendar Girl (1993) and the Western Tombstone (1993).   Plus many gay and gay-friendly roles:  Love and Death on Long Island (1997); a&nbsp;teen idol who becomes the object of an older writer's obsession (a sort of updated version of Death in Venice).       Common Ground (2000): a gay guy in the closeted 1950s (it also starred Jonathan Taylor Thomas).  Die, Mommie, Die (2003): a gay hustler.  Love Monkey (2006): friend of a gay sportscaster.              Currently Jason is starring in Call Me Fitz (2010-), a Canadian sitcom about the racist, sexist, homophobic &nbsp;used-car salesman Fitz (Jason, right) and his "conscience," Larry (Ernie Grunwald, left).  Not surprisingly, Jason is a real-life gay ally.
Posted by Boomer No comments:

The Gay Connection of "Whatever Happened to Baby Jane?" 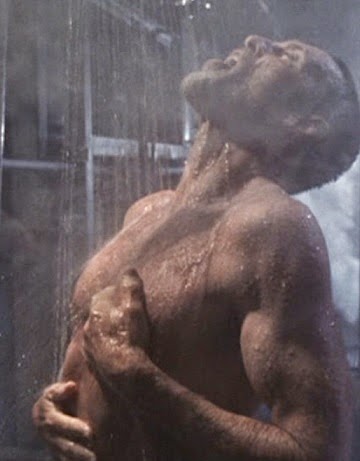 I heard that Whatever Happened to Baby Jane? (1962) was a gay classic, the coming-out film of the pre-Stonewall Era, when gay men snipped "But ya are, Blanche!" at each other as gleefully as my generation said "Come up to the lab, and see what's on the slab!"

Legendary drag queen and dramatist Charles Busch, who recorded the DVD commentary, says that it's "one of those handful of movies you have to see to get your gay card."

Well, I got my gay card quite a few years ago, so I thought I'd better get around to seeing what all the fuss was about.

Previously I had seen Bette Davis only in All About Eve, Return from Witch Mountain, and Death on the Nile, and Joan Crawford in nothing (unless you count her portrayal by Faye Dunaway in Mommie Dearest), so I was coming in fresh.

1917: Baby Jane Hudson is a 10-year old Vaudeville star whose signature song is the maudlin "I Wrote a Letter to Daddy."  Her older sister Blanche is jealous.

1934: The young adult Jane Hudson is a flop in Hollywood, but Blanche has become a big star.  Jealous, Jane runs into Blanche with her car, crippling her.  The director cleverly avoids showing Blanche, and shows Jane only in one of Bette Davis's old movies. 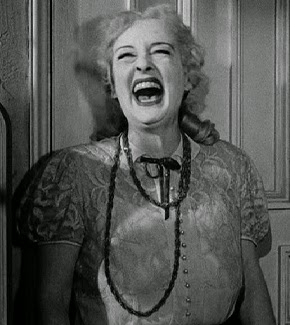 1962: Jane (Davis) and Blanche (Crawford) have spent their lives in seclusion in a decaying Hollywood mansion, seeing only their housekeeper and business manager.

When Blanche's old movies are broadcast on television, gaining her a new generation of fans, Jane gets jealous again, and starts torturing her.  During a two-day period, she kills Blanche's pet bird, tries to feed her the bird and a rat, rips the phone out of the wall, ties her up, and...well, that's about it.

Blanche tries to signal to various people that she's in trouble, but Jane always intercepts the message.

Finally Jane has a complete breakdown, dragging Blanche to the beach and reverting to her child self.

Ok, so that makes no sense at all.  But really, nothing about this movie makes much sense.  Like, shouldn't a wheelchair bound person get a room on the first floor?

And I still can't figure out the gay connection. 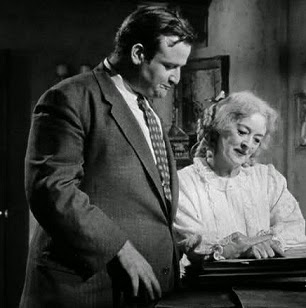 1. Buddy-bonding male friendships?  No.  There aren't any significant male characters, except in a humorous subplot about the middle-aged Jane trying to revive her child star career.  Victor Buono plays Edwin Flagg, a layabout she hires to help with the musical arrangements, who gamely asserts that her idea is genius, and even flirts with her in the interest of getting his paycheck.

2. Lesbian bonds, then?  No.  Blanche and Jane hate each other.

4. Critiques of hetero-romance?  Maybe a little.  No one is involved with anyone.  The next-door neighbors consist of a mother and daughter.  Blanche's courting of Edwin Flagg comes across as creepy and unhinged, like her incest-tinged relationship with her father. 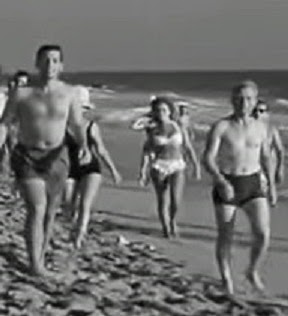 7. Beefcake?  A little, maybe.  Victor Buono looks like he might have a nice hairy chest, and during the beach scene,  some hunks in swimsuits stare aghast at Jane's breakdown.

I guess you had to be a gay man in the pre-Stonewall era to get it.

The 1991 remake was, apparently, even more over-the-top. Vanessa and Lynn Redgrave play Blanche and Jane.  Instead of a housekeeper, there is massage therapist Dominick  (Bruce A. Young), who is probably gay, and instead of a drunken musician, Jane flirts with aspiring filmmaker, drag queen, and pedophile Billy (John Glover, top photo).

See also: All About Eve 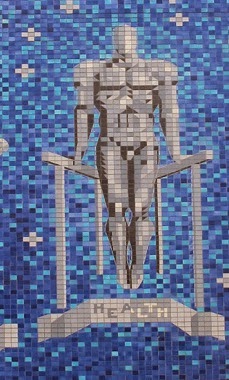 When I was living in New York, I had a friend who lived near the  Klitgord Center,  at the corner of Jay and Tilly Street in Brooklyn, the heart of the New York City College of Technology.  Every day he, and thousands of other people, walked past its gigantic 2-story mural memorializing some of the joys of college: Art, Drama, Music, Recreation, Health, and Recreation.

"Health" was a muscular man on the parallel bars, naked or wearing a skimpy jockstrap.

The Klitgord Center was demolished in 2013.

Recently I investigated the mural, and tried to find out something about the artists. 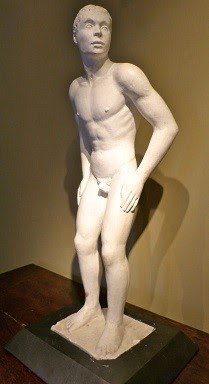 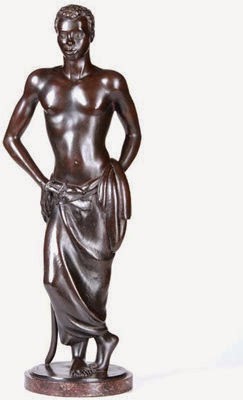 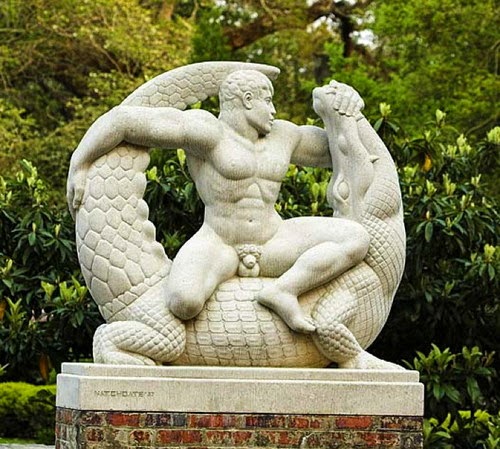 Sculptor Nathaniel Choate (1899-1965) was one of the few African-American men to graduate from Harvard in the 1920s.  Afterwards he studied in France, and traveled extensively in Morocco and Sudan, perhaps looking for the "good place" that drew dozens of gay men to North Africa.  He returned to the U.S. in the 1930s, and taught in Pennsylvania and New York.  He never married.

His subjects were usually muscular African men, such as "Alligator Bender" at Brookgreen Gardens in Myrtle Beach, South Carolina. 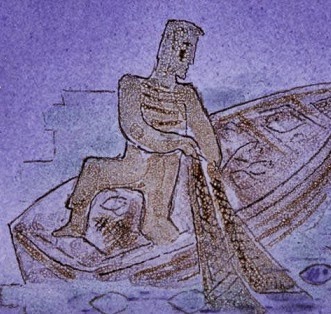 Tile artist Francis Von Tury (1901-1992) was born in Hungary, had a studio in Perth Amboy, New Jersey, and was a leading proponent of ceramics as both an art form and an industrial tool.  He never married, either.

Most of his work is stylized, but there are some interesting male figures, like this fisherman on a blue tile.

I don't know if the two men were friends, or lovers, before they began their collaboration.