American Dad: Horrifying, but not Homophobic 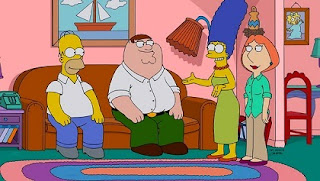 For as long as anyone can remember, Sunday night on Fox has meant animated sitcoms about nuclear families:
1. A fat, dopey Dad.
2. A slim, smarter Mom
3-4.  Two kids, a dopey son and a smart but plain daughter.

They vary in their expressions of hatred against gay people.

The Simpsons (1989-) is usually fine, with only a few homophobic jokes and only a few swishy stereotypes, plus two regular gay characters, Smithers and Patty (although Patty's gayness is barely alluded to).

Family Guy (1999-) oozes with homophobia, with a dozen homophobic jokes per episode, no regular gay characters, and the walk-ons always horrible stereotypes. Actually, I rarely manage to sit through an episode, even for research purposes.  It's too awful.

American Dad (2005-) is somewhere in the middle, with occasional homophobic jokes and swishy stereotypes, but not enough to make it unwatchable.

Unfortunately, something else makes it unwatchable. 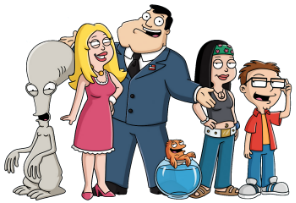 The nuclear family consists of:
1. Ultra-conservative Stan Smith, a CIA agent who is sometimes world-traveling assassin, sometimes office drone.
2. His wife Francine
3. Nerd Steve, age 14, who is obsessed with girls in a nod to heteronormative bias.
4. Ultra-liberal daughter Hayley, a community college Women's Studies major.
5. Klaus, a German skiier whose brain was transplanted into the body of a goldfish.
6. Roger, a classic gray alien with a sarcastic sense of humor. 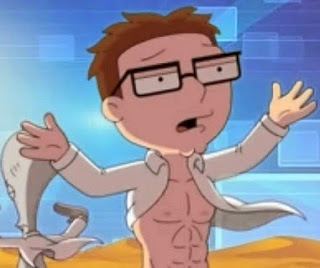 The only ongoing gay characters are neighbors Greg and Terry, ultra-feminine news show anchors and domestic partners.  Although swishy stereotypes with high-pitched voices who adopted a daughter as an accessory, they are a pleasantly progressive change of pace after watching the gay-baiting monstrosities of Family Guy.

They're not the problem.

Nor is Steve's hetero-horniness a problem.  He has three best friends, Toshi, Barry, and Snot, who alternate in buddy-bonding and gay subtexts. 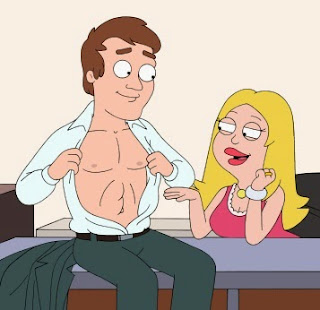 There's even some beefcake to look at.

The problem is Roger.

Originally he was just a sarcastic alien with swishy, gay-coded mannerisms. Now he's mostly heterosexual.  And a monster.

He lies, swindles, manipulates, assaults, and kills with absolute impunity.

He tricks Steve into working in his meth lab by convincing him that it's Hogwarts.

When he's working as a limo driver, he gets revenge on some guys who "drive and dash" by killing them.  The last one tries to escape on an airplane, so he blows it up, killing everyone aboard.

He gets a crush on Hayley, but she's in love with Jeff.  So he cuts off Jeff's skin and wears the bloody mess, hoping that she'll like him now.

Granted, Stan is a professional assassin, and the other Smiths have been known to kill people from time to time, but come on -- why do they let this psycho stick around, after he's assaulted and tried to kill them multiple times?

And why would anyone think that this carnage was funny?