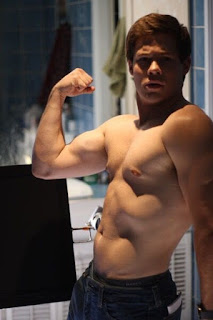 If you're under70, chances are your parents read you Green Eggs and Ham (1960), a Dr.Seuss book in which the pushy Sam-I-Am coaxes his glum dining companion to try the green stuff in various configurations:  in a boat, with a goat, in a box, with a fox, and so on.  It's maybe 300 words long, but it was probably effective in pushing a lot of broccoli.

When I heard that Netflix was releasing a 13-episode adaption of the story,  I had two thoughts:

1. How?  That's a long time to be pressuring somebody to have breakfast.
2. Will there be any gay characters?

They turned it into a road trip comedy/  The irrepresible, childlike, rather needy Sam-I-Am (voiced by Adam DeVine -- sigh) has stolen a rare chickagiraffe from the zoo, and must travel to Meepville to return it to the wild. 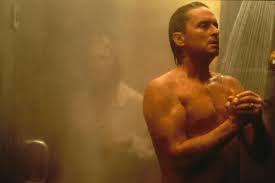 The two cross paths in a diner (where Sam does proffer green eggs and ham), and one misunderstanding later, they are thrown together, chased by the police, BADGUYS, and a diminuitive multibillionaire who wants the animal for himself.  They end up in every situation in the book: in a boat, with a goat, with a mouse, in a house, in a box, with a fox, and, more existentially, here, there, and everywhere. 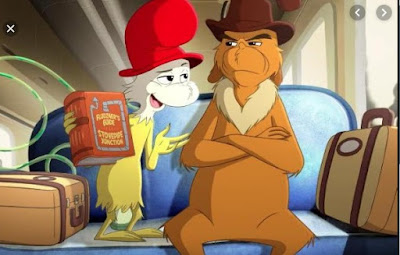 I like the sinuous malleability of the Doctor Seuss world, and the many visual gags, often involving taking metaphors literally: bean-counters actually count beans; bread-winners win bread; homemakers build homes; in a small town where there's nothing to do but watch the grass grow, that's what people do.

No characters from other Dr. Seuss stories appear; this isn't Seussical: the Musical.  But there are frequent clever references.  When Sam is trapped onstage at a high school graduation, he begins his speech "Oh, the places you'll go."  A fish family forced to flee their home takes a head count:  "One fish, two fish, blue fish -- where's the red fish?"

But Sam's questionable morality made me uncomfortable, even though he reformed in the end.

And the action didn't really build; it was "what situation will they get into next?"  I caught myself fast forwarding, thinking "Will they ever make it to that darn Meepsville). 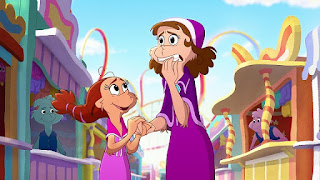 And I especially fast-forwarded through the scenes where they interact with two other travelers:  the feisty 10-year old EB (probably to give kids someone to identify with) and her mousy, afraid-of-life single mother Michellee (Diane Keaton), to give Guy someone to...well, you know.

Sam doesn't display any heterosexual interest, and his starry-eyed, touchy-feely approach to Guy definitely suggest a romantic inclination ("If you look into someone's eyes, you can see their soul"; "I could watch you working all day."]

He characterizes them as a "family," and as parents to the chickagiraffe, of which Guy is the "daddy."

And the story doesn't end with a hetero-kiss.  Instead, Sam and Guy are drawn into a new adventure.

But the tacked-on Guy-Michellee romance seems a deliberate attempt to defuse any gay reading, and almost every minor character expresses heterosexual interest.

"You're Not a Monster", But You're Not Gay, Either 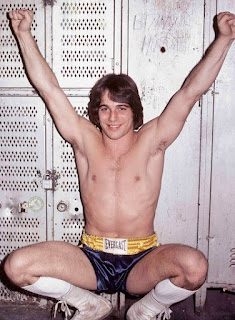 As Jimmy Durante would say, "Everybody wants to get into the act."  (Google him.)  Netflix, Vudu, Hulu, Amazon Prime, and now IMDB.  Not content to be a repository of usually-accurate information about movies and tv shows, the web giant has started a streaming service.

So far it's free (with commercials. Remember those?), with a large archive,  everything from the 1980s gay fave classic Who's the Boss (any day with Tony Danza is better than any day without Tony Danza) to 2010s gay fave  The Middle (whose idea was it to display Axl in his underwear in every episode?  I'm sending them a cake).

Plus original content. Mostly entertainment news: IMDB at the Emmys; IMDB at the Comic Con, What's on TV, What We Know So Far.

But there is also a non-entertainment-based series: the animated You're Not a Monster, about a psychiatrist (Eric Stonestreet, half of the gay couple on Modern Family) whose patients are movie monsters (most voiced by comedians like Amy Sedaris and Patton Oswalt). He shares his office with the sarcastic vampire John (Kelsey Grammer of the gay subtext classic Frasier).

The series was created by Frank Lesser, a writer for The Colbert Report who published Sad Monsters.  One of the monsters is a gay Frankenstein. 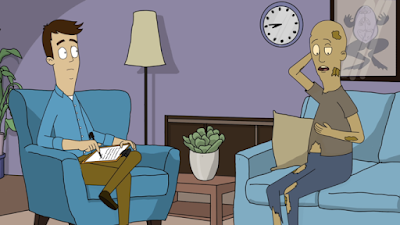 With all of that gay context, I thought, surely some of the patients are gay. So I watched all eight 5-minute episodes.

Frankenstein worries that his popularity has faded.

Freddie Krueger is depressed because of the lack of civility in the world today.

The Phantom of the Opera is hitting on his music students.

Every one of the patients is involved in heterosexual dates and romances!  Every one! 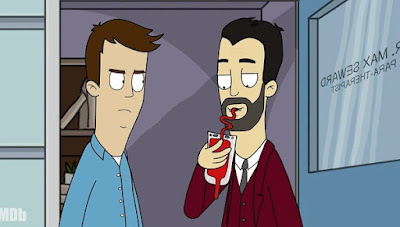 Doctor Max is heterosexual, too ("she just broke up with me six months ago.  How can she be seeing other people already?).

And even John (in bat form, he's dating a female pigeon).

Ok, they have a mentor/buddy/pain in the neck relationship (so to speak). They can be queered.

But with all that gay context, a subtext is hardly enough.

My grade: D-.
Posted by Boomer No comments: 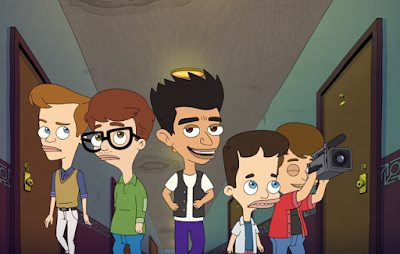 I've seen Season 3 of Big Mouth, and I'm happy to report that it's become much more LGBTQ-inclusive. And inclusive of everybody else. Among the supporting cast members are a kid in a wheelchair and a kid with autism.

Big Mouth is about a group of middle schoolers negotiating puberty, guided/ egged on by their hormone monsters: Maurice for most of the boys and Connie for most of the girls, although Nick gets Connie as well, leading him to question whether he is too feminine.

I thought that the hormone monsters were just personifications of the pubescents' interior state, but evidently they have an external reality.  There's a whole Human Management bureaucracy, with procedural manuals, meetings, and office parties.

While the monsters push for wild sexual excess, the kids are mostly worried about holding hands and "does he like me or like like me?"  Not that there isn't raunch:

When Jessi tries to get her first orgasm, we learn an awful lot about the vagina. Way more than I wanted to know.

The third season moves away from "I'm going through changes" to explore some of the issues of contemporary teenagers:  Attention-Deficit Disorder, cell phone addiction, nude selfies, sexual harassment,  "hot or not" lists.  The "Queer Eye" Fab Five show up to give Coach Steve a makeover.

There are three characters of gay interest: 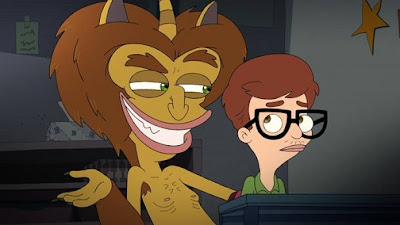 1. Andrew Glouberman, whose extra-big penis causes him anxiety and consternation (yes, we see it).

2. Matthew, the swishy gay kid, has been previously consigned to making snarky comments.  Now he gets a boyfriend.

"You're going to put it in him!"  Maurice exclaims.  But for middle schoolers, just holding hands is enough. 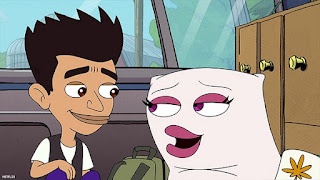 3. Jay, who doesn't seem to have a hormone monster even though he masturbates a thousand times a day, kissed Matthew at the end of Season 2. This season he comes out as bisexual, which upsets his friends; they don't mind bisexual girls, but the thought of a guy finding them attractive is creepy.

But Jay doesn't actually date anyone other than pillows and couch cushions; most of his plots involve dealing with his negligent parents and abusive older brothers.

From Muscle Beach to the Cimarron Strip: TV Westerns By the time I started watching TV in the 1960s, the Western was stale, outdated, staggeringly unhip; my friends and I could stomach only those few that involved a flashy new gimmick, like Wild Wild West or Alias Smith and Jones.  But for the Boomers growing up in the 1950s, they were as iconic as Pinky Lee and Father Knows Best.

The Western heroes were usually the discovery of gay talent agent Henry Willson, so they were gay, bi, or at least gay-friendly.  They usually wore full leather, buckskin, or other less-than-revealing garb, but they were not averse to revealing stunning physiques for the movie magazines, and even for the AMC’s proto-gay Physique Pictorial.  Guy Madison (who went so far as to pose nude) in The Adventures of Wild Bill Hickock (1951-56) 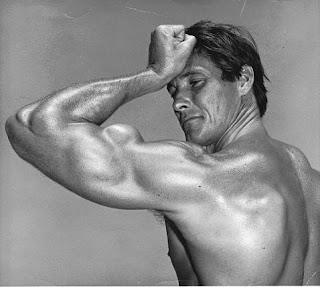 
The Western hero traditionally displayed little heterosexual interest: dames were characteristic of an emasculating civilization, along with government, education, opera, and church.  Instead, they had a  “sidekick,” a life partner of the same sex, usually someone of inferior rank due to race, age, or socioeconomic class, who provided an emotional or spiritual energy.  The sidekick is an essentially American phenomenon, and its homoerotic import has been noted for at least thirty years, since Love and Death in the American Novel.

Most of the sidekicks of the 1950s were elderly, corpulent, or buffoons, perhaps because clowns minimze the homoerotic impact of their devotion.  The fat, hee-hawking Andy Devine, later on Andy's Gang,  played “Jingles,” Guy Madison’s sidekick in The Adventures of Wild Bill Hickock.

Or they were father and son, as in The Rifleman.

But we can locate several same-sex partners whose homoerotic bond was not miminized: John Bromfield as The Sheriff of Cochise (1956-60) with Stan Jones his faithful deputy.