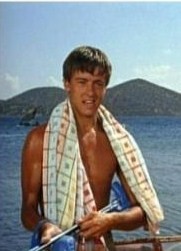 In Victim (1961), 21-year old Peter McEnery played the first explicitly identified gay teenager in film, a working class boy named Boy who commits suicide in prison.  His affluent, middle-aged lover, Melville Farr (gay actor Dirk Bogarde), tries to uncover the blackmail ring responsible for his death.  Portraying gay men as victims rather than monsters was revolutionary, and paved the way for the decriminalization of same-sex acts in Britain in 1967.

Peter moved directly from an amazingly courageous role to Disney, becoming an Adventure Boy with the two usual attributes: a muscular physique and heterosexual obsession. 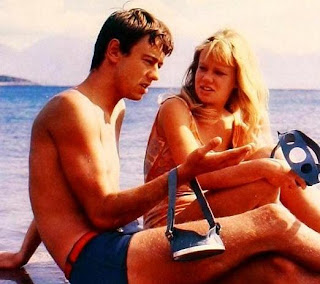 In 1964, he starred in The Moon-Spinners as Mark Camford, a young banker who gets involved with spies in Crete, and in the process falls for vacationing British girl Nikki (regular Disney star Hayley Mills).  No buddy-bonding, but quite a lot of shirtless scenes, and more suspense than one usually gets from Disney.

In 1966, he played the titular role in The Fighting Prince of Donegal: Red Hugh, the 16th century Irish prince who started a rebellion against the oppressive English.  Hugh falls for a girl (Susan Hampshire), but also buddy-bonds with an older man.

Maybe the parallels with Victim were too great, or maybe Disney was being extra-cautious after the accidental outing of Tommy Kirk.  For whatever reason, Peter never worked for Disney again.  Instead, he continued his career of gay-vague and not-so-gay vague characters. 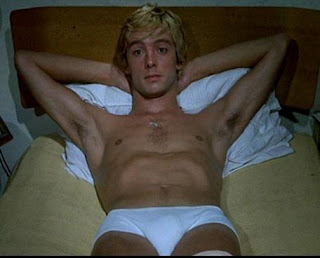 In I Killed Rasputin (1967), Peter played Prince Felix Yusopov, who was bisexual in real life, the lover of Grand Prince Dmitri Pavlovich (and enjoyed dressing in drag).  The movie tries to closet him, and all but eliminates Dmitri, but still Peter manages to imbue his character with a homoerotic passion (and he dances with a man). 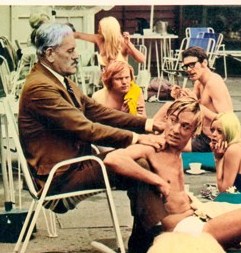 Other sexually adventurous movies followed, but the most famous is Entertaining Mr. Sloane (1970), based on the play by gay writer Joe Orton.  Mr. Sloane (Peter) is a male prostitute who moves in with a closeted gay man (Harry Andrews) and ends up the unwilling boy-toy of both him and his sister. 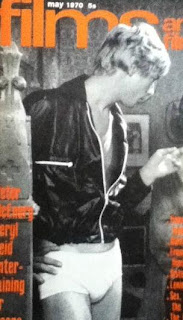 I haven't seen any of Peter's later works, mostly British television and tv movies, but some of them look interesting, and with ample buddy-bonding potential: The Cat and the Canary (which has a "gay" keyword on the Internet Movie Database); a version of Shakespeare's Midsummer Night's Dream; and Clayhanger, from a series of novels by reputedly gay author Arnold Bennett.

I have not been able to discover his real-life sexual identity, only that he was married to Julie Peasgood for a time, and has a daughter.  But with all of his gay-vague and gay roles, who cares?

"No-End House," Season 2 of Channel Zero, is based on a creepypasta about a guy whose buddy talks him into going to the titular haunted house: 8 rooms, each more terrifying, and if you make it through them all, you win $500.  There's substantial buddy bonding, and no women are mentioned.  You can easily read the narrator as gay.

According to the IMDB, it's a woman, Margot (Amy Forsyth) -- media always loves scaring women a lot more than scaring men -- and she goes in with her friends.

Three guys?  Some potential for same-sex bonding? I looked them up online...some beefcake, anyway.  So I purchased the second season of Channel Zero.

We begin with about 10 minutes of creepy grabbing-in-a-swimming-pool and I'll-love-you-forever scenes between a young Margot and Daddy John Carroll Lynch.  Way too incestuous!

Followed by another 10 minutes of a college-age Margot mourning the death of her boyfriend...um, I mean father, until her old friend Jules shows up and practically drags her out of the house to a bar. Maybe, for a change of pace, she could meet a guy her own age, who isn't a close relative? 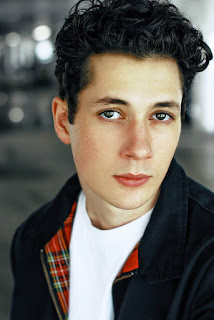 Margot picks up the charismatic Seth, and Jules hangs out with just-friend-but-wanting more J.D.

The guys are so taken by the girls that they completely ignore each other. So much for male bonding.

They all decide to go to the No End House, which is quite a popular attraction, with cars lined up for a block.  If you go through all six rooms, you win.

Groups are let in 8 at a time, but members of Margot's group drop out during the first three rooms, leaving only the two couples and the morose Dylan

J.D. (Seamus Patterson, left) goes to what he thinks is his house, where he sees an alternative version of himself kissing a hot girl.  The two versions get into a fight over the girl's affection...um... 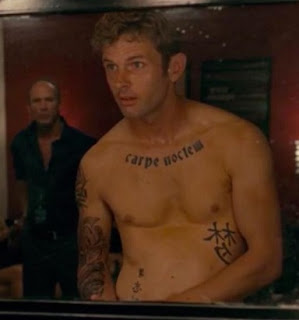 Dylan (Sebastian Piggot, left) is in the house searching for his wife, who was lost there earlier.  But he meets an alternative version, who doesn't recognize him. 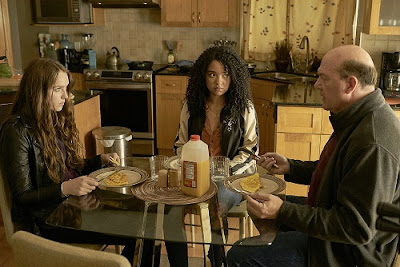 Margot finds a reality where an alternative of her father is still alive.  She decides to stay, demonic counterfeit or not, because she's still in love with him.

Fortunately, Seth talks her out of it.  He wants Margot to stay with him in the House forever.  Or rather, in a reality where they're the perfect husband and wife.

Torn between two lovers.  What's a girl to do? 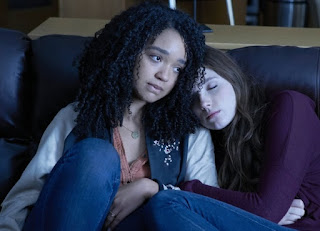 There's a lesbian subtext between the two friends, but it's totally drowned out by the creepy incest subtext.  Besides,  I was looking for male bonding.

Well, at least the guys are cute. 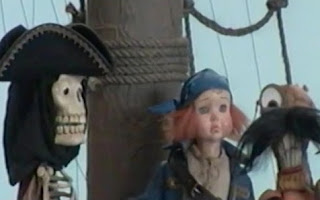 Well, I got conned again, with another season of the Sci-Fi series Channel Zero.  But this time wasn't my fault.

It was based on a very cool creepypasta, written in the form of posts to a message board, in which people vaguely recall a local children's show that aired for a few months in the 1970s: Candle Cove: a poorly produced puppet show about a little girl who finds herself living with pirates.  As they continue to remember, disturbing details arise.

An episode with nothing but the characters screaming: "No plot or anything, literally the characters just standing in place and screaming."  Who would produce such a scary program, and why?

It doesn't sound much different from real psychedelic "lost boy" series of the early 1970s, or the horrible children's shows of the 1950s.  Kukla, Fran, and Ollie still gives me nightmares.  And for that matter, what about the horror-fest, The Wizard of Oz? It could happen.

Fans are up to the task.  They've produced clips and full episodes of Candle Cove, a nearly complete episode guide, fan art (does it count as fan art if the original never existed?), and interviews with the producers and actors (who thought they were doing a good job). 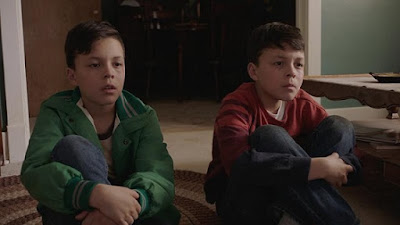 In this case, the show began airing in the fall of 1988, when 12-year old Mike and his twin brother Eddie (Luca Villacis) are being horribly bullied by Dane Yolen (Liam Marchand) and his cronies.

During the next few weeks, five kids are murdered, including the bullies and the nice but slow Alex (Keenan Lehmann).  Eddie vanishes. 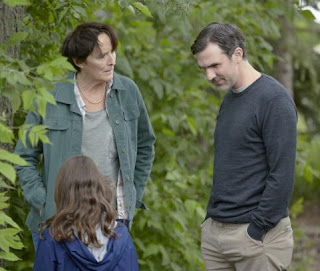 Thirty years later, Mike (Paul Schneider) returns to investigate the mystery, and reunites with his mother and the relatives of the dead kids: the bully's ugly brother Gary (Shawn Benson), now the sheriff; the mega-ugly doofus Tim (David Lawrence Brown); and his old girlfriend.

They don't want old wounds dredged up....but, then the show starts to air again, kids start disappearing, and Mike is the prime suspect.

Then his daughter shows up, and becomes one of the imperiled kids.  Uh-oh.

Spoiler alert: Eddie killed the kids, and now has returned for Mike.

Eddie is a quintessential gay villain. He can't stand the fact that Mike has a girlfriend.  He says "We're supposed to be together always," and "Tell me that you love me more than her." He has returned for Mike, so they can be together forever. 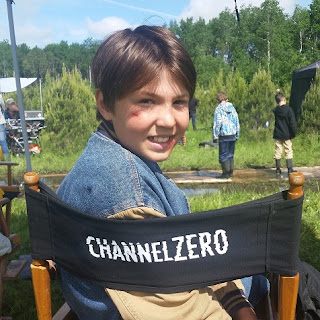 Add to it the fact that boys and men in this world are uniformly suspicious, belligerent, angry, and violent, while women are nurturing, caring, understanding, and compassionate, and you get heterosexist garbage.

Add to it the fact that the adult male actors are some of the ugliest I've ever seen, so there's no beefcake potential, and you come up with something decidedly unpleasant.

2. The puppet show itself.   "You have to...go...inside!" may become this generation"s "Down here, everything floats."