Give Me a Prehistoric Man 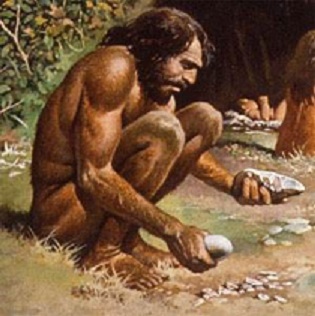 When I was a kid in the 1960s and 1970s, my church hated "evil-lution" almost as much as Roman Catholics.  It was not only a big lie, it was the source of every modern problem from hippies to homa-sekshuls,

Adam and Eve were the first people created, about 4000 BC.  They moved directly into a technological civilization that ended with Noah's Flood, 2500 BC, and was rebuilt again in time for Abraham, 2200 BC.

So the history of Egypt, Sumeria, China, and India could not have begun before 2500 BC, and there was no prehistory.

Cave men did not exist.  No ancestors of homo sapiens existed.  Any artifacts were from the civilization before the flood. 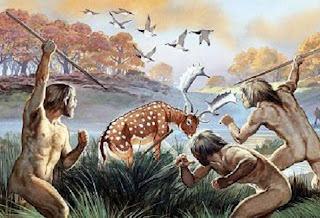 We were forbidden to learn about, talk about, or think about evolution, lest Satan brainwash us.

I looked up Darwin's Origin of Species in the school library, but was afraid to open it.  What if just reading the words was enough to damn you for eternity? 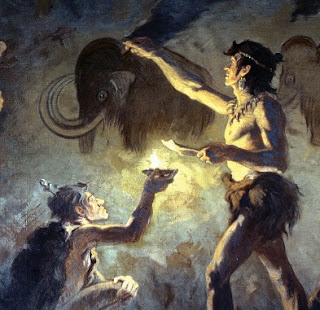 But reading about prehistoric people was exciting.  There was a little frisson of evil, some apprehension, like an apprentice magician who picks up a book of forbidden spells.

But where else could I see so much beefcake?  Prehistoric people always went shirtless, even in the frigid glacial ice, and they often had bare butts, too. 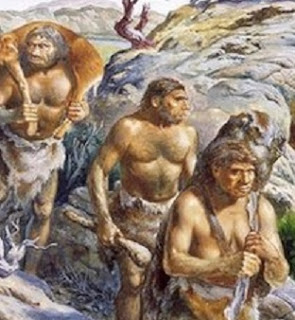 Remember the song "Prehistoric Man" from On the Town? 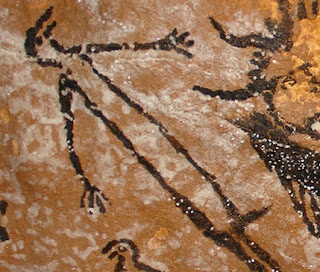 More recently I've been studying the Upper Paleolithic Era (50,000 to 10,000 years ago), when our ancestors began to use symbolic communication and live in villages larger than family units.  It's the period of the vast collections of cave art (they probably never actually lived in caves, but just used them for rituals).

Most of the cave art represents animals, but about 10% represent humans, the men with penises, often erect, a homoerotic link from their culture to ours.

They also produced representational art, like this stone phallus.  The standard texts say it's a fertility symbol with no practical use.

I disagree.
Posted by Boomer No comments: 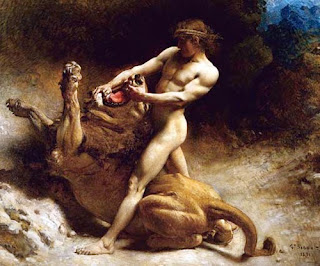 The famous muscleman Samson appears in the Hebrew Bible in Judges 13-16.  His long hair is the source of superhuman strength, allowing him to wreak all sorts of mischief on the evil Philistines.  But Delilah teases the secret out of him and cuts his hair.  The Philistines blind him and put him to work on a giant millstone.  But he regains his strength long enough to pull down the pillars in the Temple of Dagon, killing himself and 3,000 worshippers.

Sounds similar to the 9/11 terrorist attacks.

Several incidents from Samson's life have inspired artists. Leon Bonnat's Samson's Youth (1891) portrays a young, naked Samson killing a lion with his bare hands.  He will later use the lion's jaw to make up a riddle for the Phillistines. 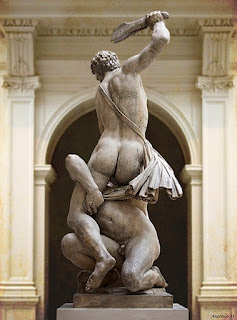 At Yale University you can see a statue by John Cheere (1709-1787) of Samson getting a...I mean Samson slaying a Phillistine (he really hated them) 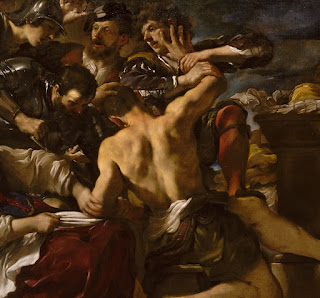 Probably the most common subject for artists is the betrayal by Delilah.

Giovanni Francesco Guercino's Samson Captured by the Phillistines (1619) emphasizes his muscular backside, and pushes Delilah over to the side in insignificance. 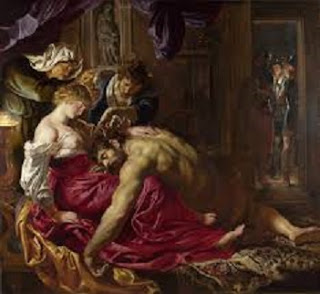 Samson and Delilah (1609-10), by Peter-Paul Rubens, shows the sleeping muscleman about to get cropped. 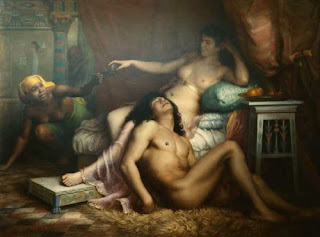 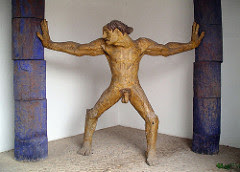 Another popular theme is Samson pulling down the pillars at the Temple of Dagon. This statue is in Portugal. 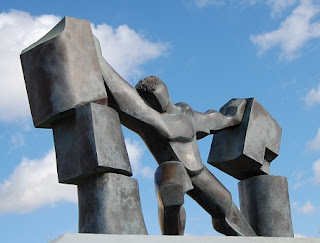 This stylized depiction, with Samson as massive and square-edged as the pillars themselves, is in Ashdod, Israel. 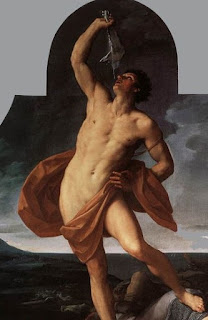 Guido Renni's The Victorious Samson (1609) doesn't show any temples being destroyed.  A rather young, naked Samson is removing the blindfold from his eyes.

The Physique Photographs of Bruce of L.A. 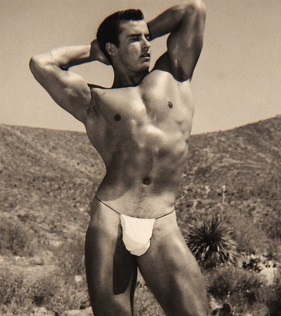 Everyone's heard of Physique Pictorial, the groundbreaking magazine that displayed male semi-nudes in the desolate years before Stonewall.

But Bob Mizer wasn't the only physique photographer selling semi-nudes to gay men.  There was also the legendary Bruce of L.A. 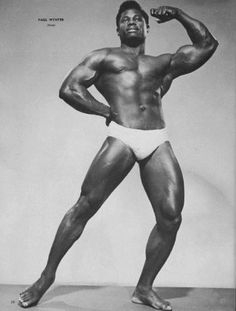 Born Bruce Bellas in Nebraska, he was a high school chemistry teacher in Nebraska before moving to L.A. in 1947.  During the 1950s he began photographing singlet-clad muscle men, publishing first in Physique Pictorial and then his own Today's Man.  His photos were also available by mail order. 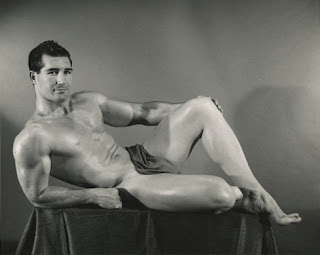 Some of his models adopt the standard bodybuilder's flex, but there are also relaxed informal poses, like this older hunk reclining on a table. 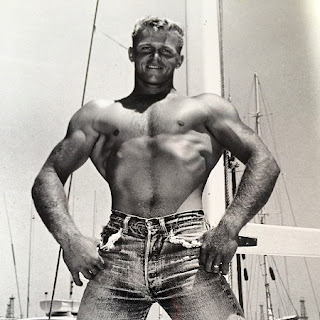 He died in 1974, but his influence lives on in the work of artists like Robert Mapplethorpe and Bruce Weber.
Posted by Boomer 1 comment: