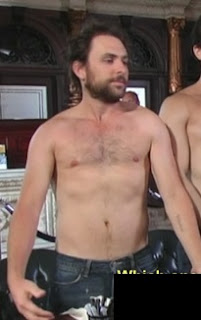 Last night I watched Horrible Bosses (2011) on Netflix.  I resisted when it originally appeared due to its reputation for extreme homophobia, but, strangely enough, I didn't find it particularly homophobic.

The premise, obviously, is that three best buds have horrible bosses.

Nick (Jason Bateman) works for David Harken (Kevin Spacey), who calls him a liar for saying he came to work on time when he was actually two seconds late, tricks him into drinking whiskey, then calls him a drunk, and holds a promotion over his head, only to give it to himself.

Dale (Charlie Day of It's Always Sunny in Philadelphia) works as a dental hygienist for Dr. Julia Harris (Jennifer Aniston), who sexually harasses him (and sexually assaults her unconscious patients), and tries to blackmail him into having sex with her. 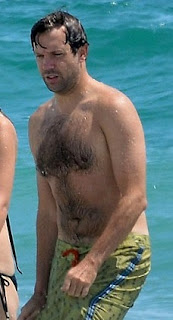 Kurt (Jason Sudeikis, left) likes his boss (Donald Sutherland), but then the old man dies, leaving the company to his bigoted cokehead son Bobby Pellitt (Colin Farrell) who wants to make as much money as possible by cutting corners and ignoring environmental guidelines.

For reasons that weren't entirely satisfactory, they can't quit, or file complaints with regulatory boards, so they decide to kill their bosses.

First they answer an ad on Craigslist, but the "hit man" turns out to be a hustler who specializes in urinating on men.

They hire a man named "Motherf___ Jones," who eventually explains that he's never actually killed anyone.  He did jail time for illegally filming a movie.

Then David Harken, suspecting that Bobby Pellitt has been having an affair with his wife, shoots him.  The gang witnesses the murder, but how can they implicate Harken without getting in trouble themselves? 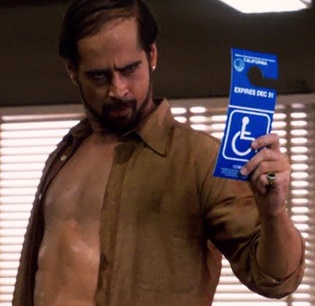 In fact, Dale is engaged to a woman, and Kurt tries to pick up every woman in sight with lame come-ons (which always work), but Nick doesn't express any heterosexual interests.  He specifies that, due to a heavy work load, he hasn't "had sex with someone other than myself" for months.  He can certainly be read as gay.

Doug McClure: From Physique Pictorial to The Simpsons 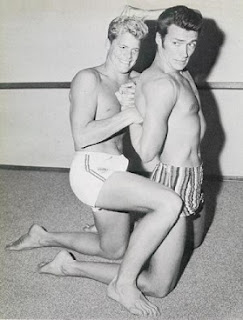 Who was this Doug McClure, and how did he get typecast as a bumbling, dimwitted has-been?

A little research reveals quite a different character:

A fitness model who appeared in the gay-vague Physique Pictorial in 1957 (here pinning Clint Eastwood). 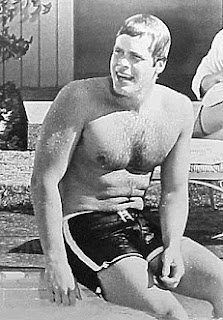 2. Engineering student Chuck Manning in The Lively Set (1964), who teams up with young mechanic Casey Owens (teen idol James Darren) to build a jet-powered car.  He's not interested in girls, but his sister hangs around to provide Casey with the fade-out kiss. 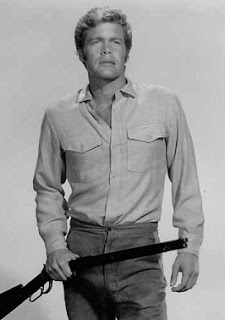 4. Trampas, head farm hand on the Shiloh Ranch in Wyoming run by The Virginian (James Drury) (1962-71).  This was his most famous role.  Apparently he knew how to fill out a cowboy suit, especially with a rifle handy.

Doug continued to play cowboys, detectives, secret agents, and adventurers through the 1980s, but he never had another starring role. Maybe that's where he got the "has-been" image.

All of that buddy-bonding fueled some substantial gay rumors, even though he was married to women five times.

Don Johnson and the Gay Community 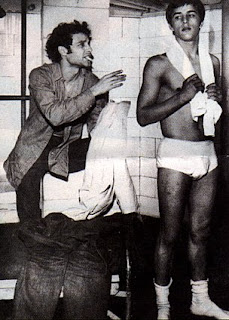 Don Johnson had a close relationship with the gay community from the start.  In 1968 he dropped out of the University of Kansas to enroll in the American Conservatory Theater in San Francisco, and immediately landed the starring role in Fortune and Men's Eyes, a play about a teenager who is sexually assaulted in prison.  He moved to Los Angeles to play the lead in the 1971 film version, directed by famous gay actor Sal Mineo (who became his roommate).

And lover (according to the rumor mill).  But then, if Sal Mineo really had relationships with everyone the rumor mill said he did, he would have been too tired to act. 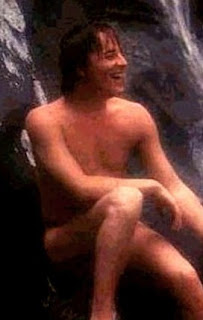 Don also played the titular character, who grooves on both men and women in  The Magic Garden of Stanley Sweetheart (1970) -- one of the songs, "Sweet Gingerbread Man," was covered by Bobby  Sherman.

And a boy traveling through a bleak postapocalyptic world in A Boy and His Dog (1975), who gets captured and used as a breeder in a crazy underground city where the men are mostly sterile.  It was re-envisioned in 2010 in Cartoon Network's Adventure Time.

And so on through the 1970s, in vehicles that were sometimes gritty, sometimes surreal, but always emphasized Don's sexual desirability -- to both men and women.

As the counterculture waned, he found himself in conventional heterosexist roles in tv series like The Rookies, Streets of San Francisco, and Barnaby Jones, and tv movies like The Rebels, Revenge of the Stepford Wives, and Six Pack. 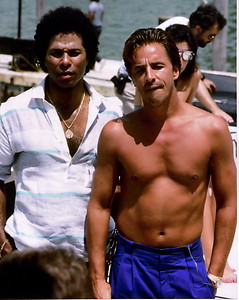 He made something of a comeback in Miami Vice (1984-1990),about an odd-couple of vice cops making the scene with fast cars, stylish clothes, and lots of buddy-bonding.  Crockett (Don Johnson) was the good old boy who grew up in rural northern Florida and had a pet alligator named Elvis; Tubbs (Philip Michael Thomas) was the streetwise New Yorker.

The buddy-bonding  is not nearly as intense as in Starsky and Hutch a decade before, and interspersed with lots of heterosexual hijinks.  But during the homophobic 1980s, it was about all you could expect.

There are nude photos of Don Johnson on Tales of West Hollywood.