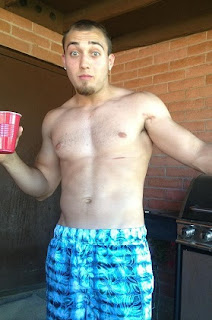 I looked at over 300 pictures of naked men this morning before breakfast.

Old and young, big and small, flaccid and aroused, all ages (18+), shapes, and sizes.

And, if I had the time and inclination, I could easily look at 300 more.

When I was growing up in Rock Island, and even through my years in West Hollywood in the 1980s and 1990s, you might see ten pictures of naked men per month, if you were lucky.

They were glossy photos of professional models in expensive magazines.

Nude photos of amateurs were extremely rare.  Photo labs wouldn't develop them, so you had to have your own darkroom.


Even shirtless photos were rare.  Occasionally a shirtless celebrity would show up in a movie magazine.  Or you could look at the underwear ads in clothes catalogs. 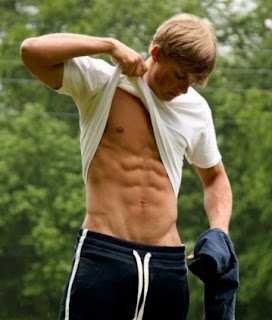 Beginning around 1990, you could buy cameras that developed the pictures on the spot, so you didn't need a photo lab.  Suddenly you could get nude photos.

But only of your friends, who you had seen naked in real life.  There wasn't much point.

The full story, with nude photos, is on Tales of West Hollywood. 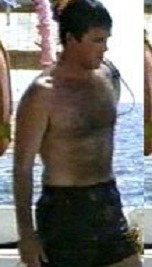 Alan Thicke, who died on December 13th, was best known as the conservative psychiatrist dad on the Reagan Era warmedy Growing Pains (1985-1992), but he was most at ease as a mc.

He got his start as a talk show host, with The Alan Thicke Show (1980-82), renamed Thicke of the Night (1983-84), and through his career he hosted many specials, from the Emmies and the Golden Globes to The Barry Gibb Love and Hope Festival, and narrated many documentaries, from When Mom and Dad Break Up to How Canada Invented Hollywood. 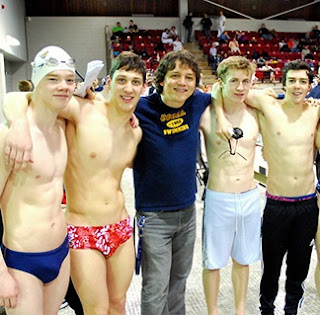 Most recently he starred in a family reality series, Unusually Thicke (2014-2015), along with his wife, his sons and their spouses, and celebrity guest stars like David Hasselhof, Bill Maher, John Stamos, Lance Bass....

And his nephew Creighton Thicke-Rattray (second from left), a college swimming star. 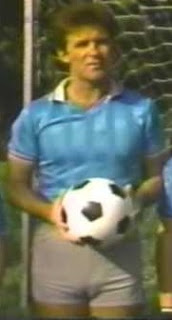 Handsome but not muscular, Alan was a more of a lady's man than a gay fave rave.  He did get a photo shoot in Playgirl.   No nude shots.

And you could see a bulge here and there, leading to lots of jokes about just how thick Alan was.

Today we might make the same speculation about his sons. 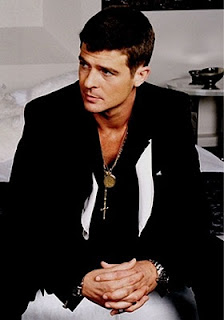 Brennan (born 1974) briefly followed his father into show biz. As a child star, he voiced Scott Tracker in the cartoon MASK (1985-85) and Dennis in Dennis the Menace (1986-88).  He now runs a nonprofit marijuana dispensary in California and works for his wife's wedding dress business, Dolly Couture. 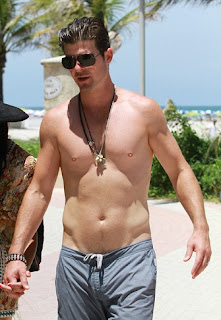 Robin (born 1977) is a singer/songwriter who has written and produced several R&B hits, such as "Sex Therapy."  He is best friends with gay singer Usher.

He has obviously inherited his father's looks and...um...other things. 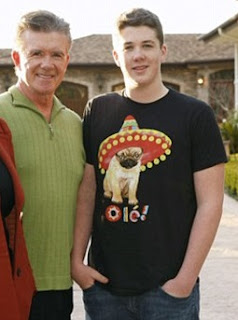 Carter (born 1997) has appeared with his father in Celebrity Wife Swap, Celebrity Family Feud, Unusually Thicke, and the movie It's Not My Fault and I Don' Care Anymore (2015).

He is active in social media, where he has expressed strong support of the LGBT community.

10 Things You Should Know about Dating Teenagers 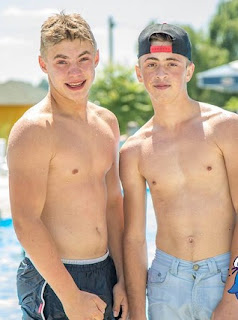 Teenagers are everywhere.  They're delivering your pizzas, mowing your lawn, working out next to you at the gym, reading depressing poetry at the coffee house, texting furiously while sitting six-to-a-booth at the diner.

They are generally attractive, with fresh, eager faces, and tight smooth bodies that haven't yet gone to fat, even if they aren't particularly buffed.

And they're available.  I estimate that about 75% of gay and bi teenage boys are into older guys (a category that includes everyone from age 25 to death), and the others aren't usually, but they'll make an exception if you know your way around a gym.

They are drawn to five things that their peers lack, but daddies have in abundance:  an apartment, a car, a college degree, a hairy chest, and sexual experience.

But before you make a date with that cute guy who is cruising you, there are 10 things you should know: 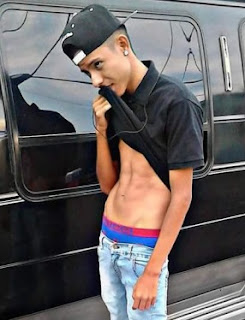 1. You will have to card him.  Adolescent development occurs at different rates, so the guy who looks like an adult, with hard muscles and hair on his chest, might be only 14 or 15.  Don't take his word for it -- check his id to make sure he's of legal age.

2. He may bring a friend. Teenagers don't actually "date" anymore: they hang out.  They may pair off later for sexual activity, but the social part of the evening takes place in a group.  He won't understand your desire for one-on-one conversation.

Of course, that may work out to your advantage, if the friend wants to share your bed, too.

3. He will be texting constantly.  In his world, it's not rude. His friends expect him to be constantly narrating his life events, and commenting on theirs, no matter what he's doing.

The full list is on Tales of Wet Hollywood.
Posted by Boomer No comments: 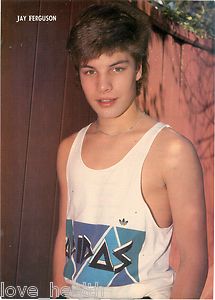 Born in 1974, Jay R. Ferguson first received gay teens' attention in the short-lived tv adaption of The Outsiders, about boys falling in love with each other.  He had a lengthier tenure on tv series Evening Shade (1990-1994), with Burt Reynolds as Wood Newton, a high school football coach in one of those quirky small town that popped up everywhere in the 1990s.  Jay played his teenage son, Taylor, who was star quarterback, and as aggressively girl-crazy as most other teenagers on prime time in the 1990s.  But for many teens, being "dreamy" was enough.

Jay redeemed himself with The Price of Love (1995): he plays a gay hustler who shows the ropes to the "gay for pay" Bret (Peter Facinelli). 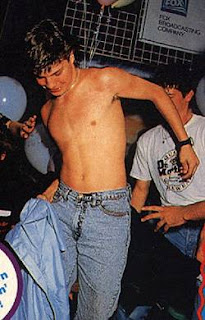 His dreaminess quotient decreased when he got a reputation as a hard partier.  Even tearing off his shirt during a party at Fox didn't help.  Kids like their teen idols wholesome and innocent.

During the late 1990s, Jay did a few buddy-bonding movies.

Hollywood Palms (2000), about the interconnected lives of residents in the Hollywood Palms apartment complex.  Jay plays rocker Riley, who buddy bonds with Dexter (Jeff Russo).  Together they try to prevent a murder. 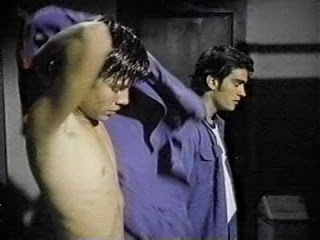 But when he graduated to adult romantic leads, the buddy bonding dried up.  All I could find was a 2005 episode of Medium: Jay plays Tommy Lehane, best buddy of the medium's brother Michael (Ryan Hurst), who might be a murderer. 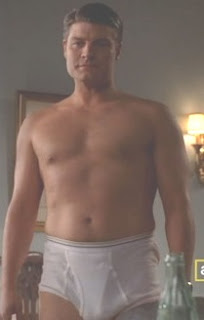 He's still quite muscular, and not averse to stripping down to his underwear, in spite of his huge bulge. 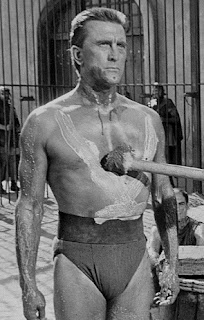 His four sons and grandsons have followed in his footsteps. 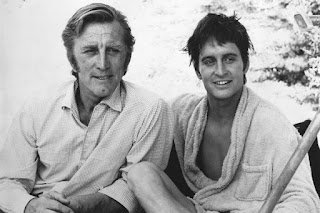 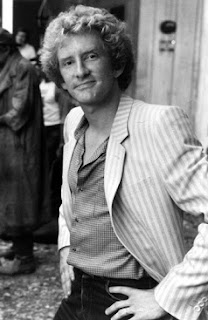 Joel (born 1947) is a film producer, mostly working on productions with his father and brother. 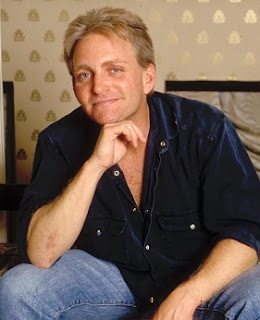 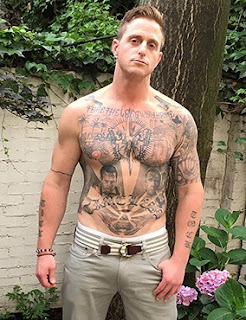 Michael's son Cameron (born 1978)  has appeared in four films, including It Runs in the Family (2003).  He spent five years in prison for drug dealing.  Released in 2016, he is anxious to continue his acting career. 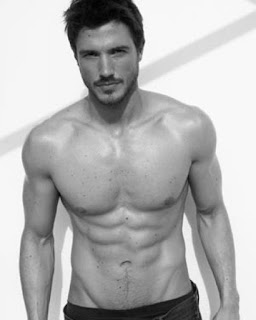 Here are two more Douglases.  I don't know if they fit into the family or not. 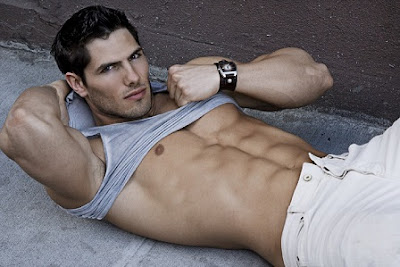