The Pearl Fishers: Two Guys in Love in Sri Lanka 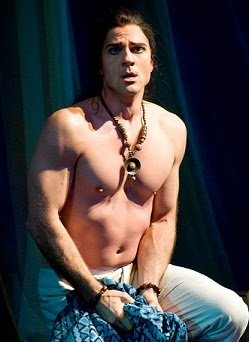 I hate opera.  Long, boring songs, hackneyed, cliched plots, and nothing but hetero-romance as far as the eye can see.

Sometimes there's a gay subtext, as in The Spanish Hour  or Porgy and Bess, but usually you're listening to some guy singing endlessly in Italian about "Women are great, aren't women great?  Men don't like men, they just like women, because women are great!"

But The Pearl Fishers (Les pecheurs de perles, 1863), by Georges Bizet, is about men in love. 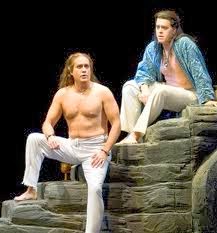 Based on a long tradition of stories about intense, passionate friendships set in "exotic" locations, it features Zurga, the leader of a group of Sri Lankan pearl fishermen, and Nadir, his bosom buddy.  They are usually portrayed bare-chested and muscular, and in love with each other.

When the other pearl fishermen sentence Nadir to die for offending the gods, Zurga argues for clemency.  Then he discovers that Nadir is in love with his ex-lover, and angrily calls for them both to be executed.  At the last minute he changes his mind and allows the two to escape, and his enraged coworkers stab him to death. 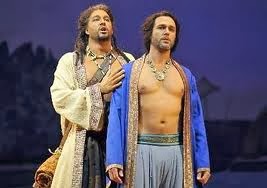 It's not exactly Brokeback Mountain, but for an opera, it has enormous gay subtext potential.  Listen to this song: 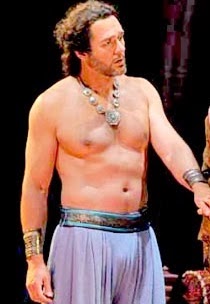 It has been performed often in Europe and the United States, and recently for the first time in Sri Lanka.  You can also several different recordings.

And it's a lot more interesting than John Steinbeck's "The Pearl"

The High Chaparral: Billy Blue and the Bulging Manolito

When I was a kid in the 1960s, my friends and i wouldn't be caught dead watching a Western -- we were all about superheroes and outer space.  So I never saw a single episode of High Chapparal (1967-71).  But I remember being curious -- what the heck was a "chapparal" anyway, and who was this Blue Boy, who appeared in all of the teen magazines?

1. A chapparal is a shrub found in the Arizona desert.

2. Blue Boy, aka Billy Blue (Mark Slade) was the teenage son of Big John (Leif Erickson), who ran a ranch in Arizona. 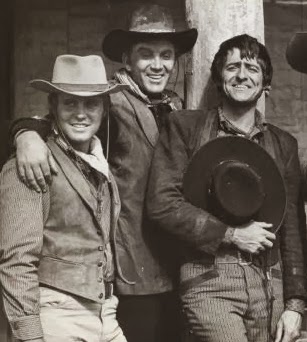 Early in the series, Big John marries Victoria (Linda Crystal), daughter of the rancher next door.  She arrives accompanied by her brother Manolito (Henry Darrow, right, the one with the beneath-the-belt potential).

Sounds like a testosterone-intensive ranch.  I wonder if there was some buddy-bonding?  From what I can tell from the very extensive episode guide, Buck and Manolito form a nice homoerotic bond, while Billy Blue is a surly teenager who digs the ladies. 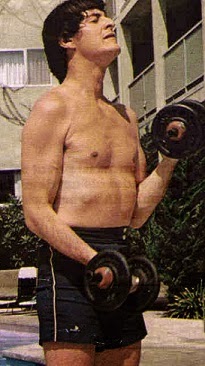 The episode guide gives photos of each episode, and there appears to have been significant shirtless scenes.

Mark Slade, although almost thirty years when he played the "surly" teenager, received some teen idol attention. He got his start on Broadway, and starred in Voyage to the Bottom of the Sea and Gomer Pyle before High Chapparal.  Later he left acting to become an artist.

Henry Darrow, who was born Enrique Thomas Delgado, made hundreds of movie and tv appearances, including the Hispanic hero Zorro (in the series Zorro and Son).

The Running of the Nudes

If you've been to a bullfight, you know that it's a bloody, gruesome spectacle, in spite of the gay symbolism and massive bulging of the matadors.  It's been outlawed in many provinces, and activists all over the world are trying to raise awareness of the inhumane treatment of the bulls.

What better way to protest than to take off your clothes?

Anti-bullfighting activists from PETA (People for the Ethical Treatment of Animals) and other organizations have been protesting nude or in their underwear for several years.  They appear at embassies, arenas, and public squares in Mexico, Spain, Colombia, and even places without bullfighting, like Prague and Amsterdam.

Both men and women participate, but you can easily overlook that little detail. 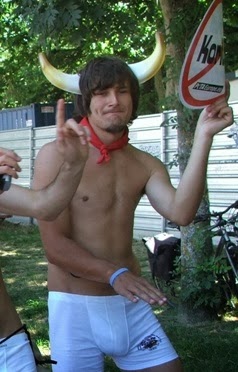 1. They want to "become" animals, and animals are naked.

2. They sometimes get covered with blood and "die" to symbolize the cruelty to the bulls.

3. You try standing in the hot sun all day without taking something off.

4. It draws a lot more attention than protesting while wearing clothes. 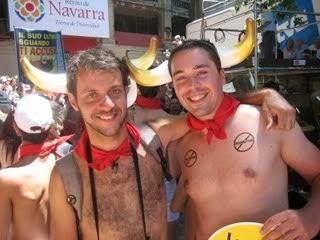 Every July since 2002, before the famous Encierro (Running of the Bulls) in Pamplona, Spain, PETA stages a Running of the Nudes.  Activists run naked or in their underwear through the streets, both to publicize the cause and to give tourists a fun, humane alternative to watching animal torture.

Anyone over age 18 can participate.  It's a lot safer than the Encierro.

Afterwards you should go north to San Sebastian, about an a hour and a half by train, to look at the world's largest penises. 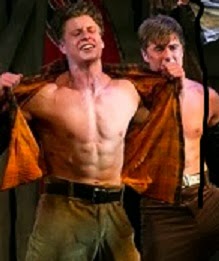 Seven Brides for Seven Brothers (1954) is one of the few 1950s musical films that wasn't based on a Broadway play.  It's based on a short story, "The Sobbin' Women," by poet Stephen Vincent Benet.

It is one of the more homoerotic spectacles in the history of musical theater:

On the surface, it seems heterosexist: Adam (Howard Keel), who is married to Milly (Jane Powell), has six rowdy, unkempt, uncivilized brothers.  He thinks that getting married would civilize them, so they abduct six women from the village and cause an avalanche so they can't be rescued.  Unfortunately, they forgot to abduct a preacher, so they can't get married.  They'll have to wait out the winter with surly, angry women trying to get revenge.

In the end they get civilized after all, and the women fall in love with them and want to get married.

But not until a movie-worth of pranks, hijinks, and guys who see women as an intrusion into their masculine preserve. 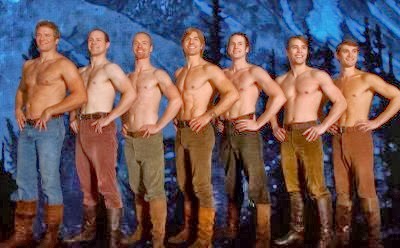 The six abducted women are off stage most of the time, while the brothers -- all muscular, acrobatic dancers -- frolic amongst themselves.

Several of them -- Matt Mattox, Tommy Rail, Russ Tamblyn -- were gay or at least the subject of gay rumors.

There was a brief tv version in 1982, with the six brothers all kids, and no brides.  It is notable for starring River Phoenix as Guthrie. 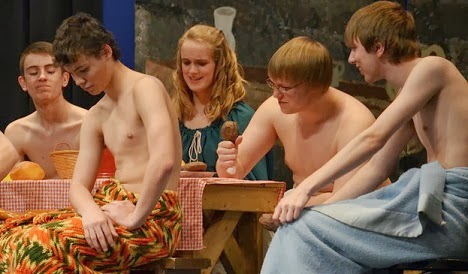 The choreography is big, bold, innovative, and tough, but a number of high schools and colleges have tried, giving young drama majors a chance to strut their stuff shirtless.

Equus: Nudity, Gay Symbolism, and a Religion of Maleness 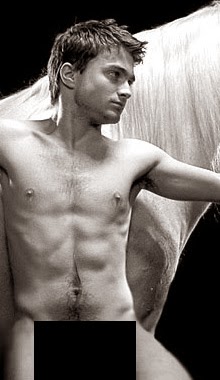 Daniel Radcliffe made headlines when he moved from the sexless heterosexual wizard-in-training Harry Potter to the overtly sexual, gay-coded -- and fully nude -- Alan Strang in Equus.

We shouldn't have been surprised.  Hunky guys have been displaying their penises on stage since the play (by gay playwright Peter Shaffer) first opened in 1973.

But in a scene that's so breathtaking in its intensity that you forget to gawk at the beefcake. 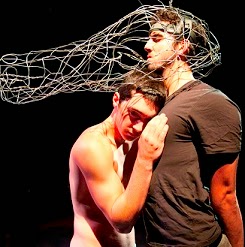 Equus is about Alan Strang, a British stableboy who sublimates his homoerotic desires into worshipping the hard muscles of horses (always portrayed on stage as hot guys in masks or headgear).

He develops an entire religion around the horse-god Equus, devotion to muscle, and power, and maleness. 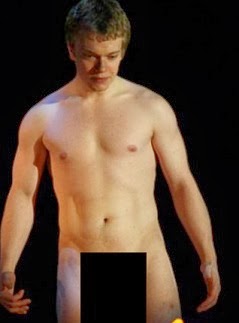 Then a girl seduces him, in the stables while horses are watching.  Alan feels intense guilt over his sin -- choosing the feminine over the masculine, sex over passion.  He believes that the horses are judging him, and in a fit of despair he blinds them.

The gay but closeted psychiatrist Martin Dysart is assigned to cure him, draw him away from his homoerotic religion to heterosexual "normalcy":

"I'll give him the good Normal world...give him Normal places for his ecstasy...with any luck his private parts will come to feel as plastic to him as the products of the factory to which he will certainly be sent...hopefully he'll feel nothing on his fork but Approved Flesh...I doubt, however, with much passion." 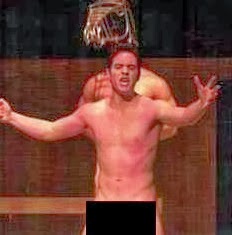 Equus is staged quite often, perhaps because it allows the actor playing Alan a tour de force performance.

It was filmed in 1977, with Peter Firth as Alan and Richard Burton as Martin Dysart.  But they used real horses, which minimized the gay symbolism.