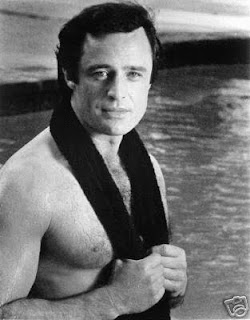 Born in 1956, Joe Penny got his start playing rednecks, cops, Scott Jacoby's buddy in a high school sports drama, and a  werewolf's buddy in a horror movie.

But it was his role as a closeted gay cop on Lou Grant (1979) that brought him notoriety -- and a long career in gay-subtext buddy-bonding roles. 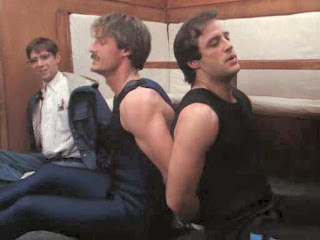 Nick Ryder in Riptide (1984-86)  was a throwback to the Swinging Detective Adventurers of the 1960s who worked out of glamorous locales and came in pairs.  His partner, Cody Allen, was played by Perry King (the one with the muscles), whose resume has a long list of gay and nearly-gay characters. 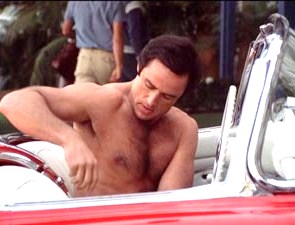 Jake on Jake and the Fatman (1987-92), a Swinging Detective Adventure in Hawaii, partnered with Fatman William Conrad.

Frank Darnell, head of the Central Security Agency who employs soccer mom Cathy Davis and hangs out with her husband, Jack (William R. Moses) in a series of Jane Doe movies (2005-2008). 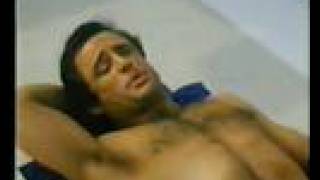 Never married, he has often been the subject of gay rumors; and, when he was ill during the 1980s, the rumor that he had AIDS.  Both are untrue, he states; he just hasn't found the right woman yet.

The Satyr and his Boy Toy 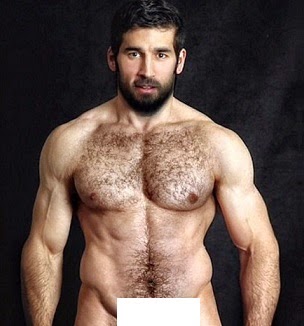 When I moved to Upstate New York in the fall of 2008, my social calendar was soon crowded with invitations from members of the Gang of Twelve, guys who had known each other for years, and who shared everything, from gossip to boyfriends.

All of them told me, "You have to meet the Satyr!"  But they all had different stories.

The Rapper: he's a Sugar Daddy with a fetish for black men.

He didn't send any photos or give any stats, so I didn't know what to expect when I drove to old Victorian on the west side of Oneonta.  But I certainly didn't expect Chad, the waiter from the Neptune, to answer the door.

"Hey, Chad! I didn't know the Satyr had a roommate." 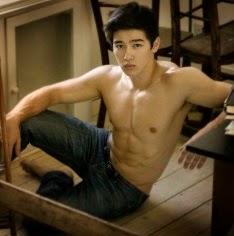 "I'm not his roommate," he said with a cryptic smile.  "He's still getting dressed -- come on in and wait in the parlor."

He ushered me into a room cluttered with heavy leather furniture, old black-and-white photographs, bookshelves, a coffee table made out of an old crate.

I was left alone for about ten minutes to leaf through coffee table books on Asian art and try to make friends with a skittish cat, until the Satyr finally came down the stairs.

A tall, husky, bearded bear, around 60 years old.  Broad shoulders, round belly.  And, when he gave me a hug, I felt that he had a baseball bat down there, all revved up and ready to go.

"Don't take it personally," the Satyr said with a chuckle.  "I'm always like that when I meet a new guy."

The rest of the story, with uncensored photos, is on Tales of West Hollywood.
Posted by Boomer No comments:

Brock Ciarlelli: The Uncle Tom of "The Middle" 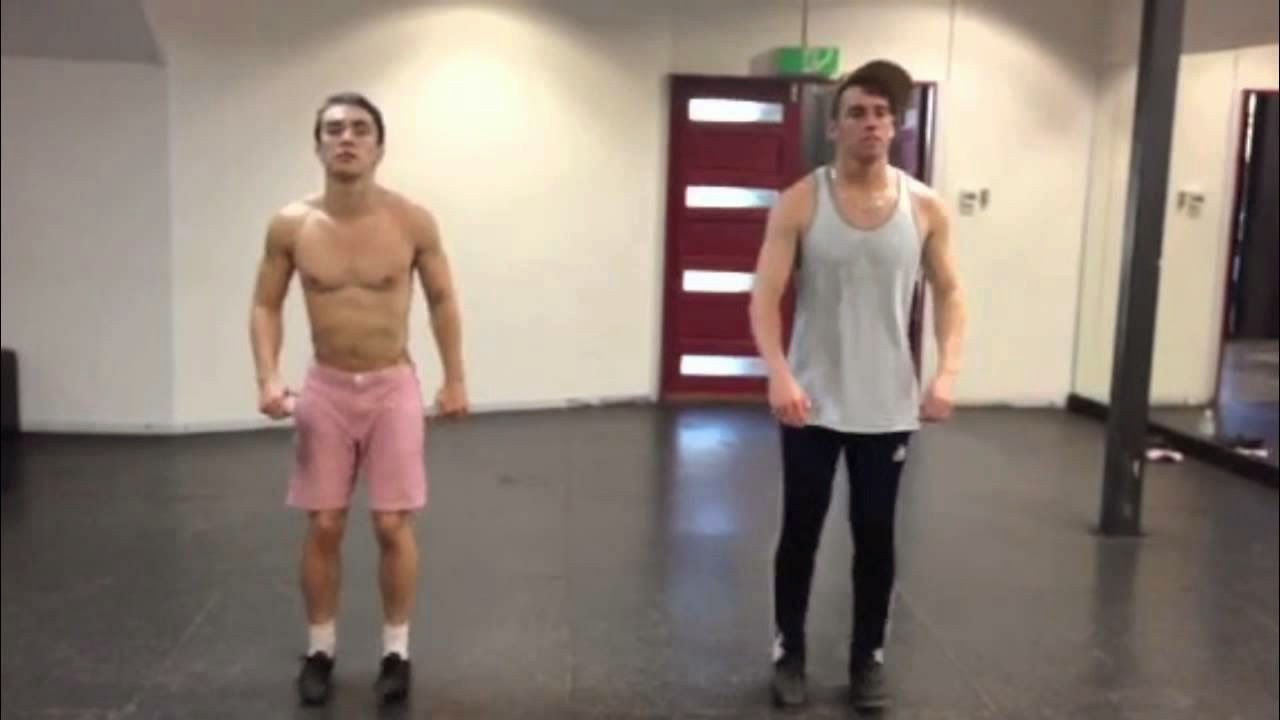 As a long time fan of the dysfunctional-family sitcom The Middle (2009), I have complained several times about the incessant heterosexism: boys like girls, girls like boys, period, end of story.

I thought that preteen Brick was gay, but no, the minute his character hit puberty, his "hormones" kicked in, and he became girl crazy.

And that's about it. 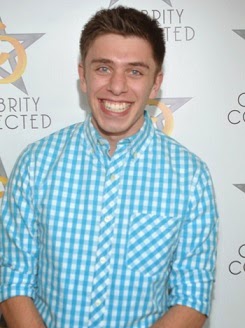 There is a recurring gay character, sort of: the uber-stereotypic swish Brad, Sue's high school friend.  The joke is: no one realizes that Brad is gay except Sue's parents, Frankie and Mike.

Certainly not Sue, who is unaware that gay people exist.  Not even Brad, also unaware.

So who is this person with the 5,000 teeth who has won two Young Artist Awards for his contribution to the erasure of gay people from the world? 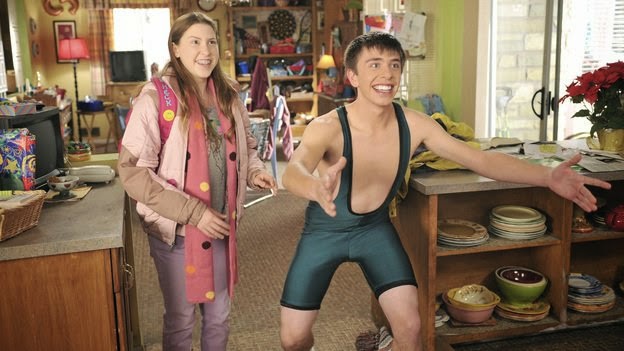 Asked if he minded playing a gay character, he said "no."

Asked about his character's obliviousness to his gay identity, he said: "to me, that says that sexual orientation doesn't matter." 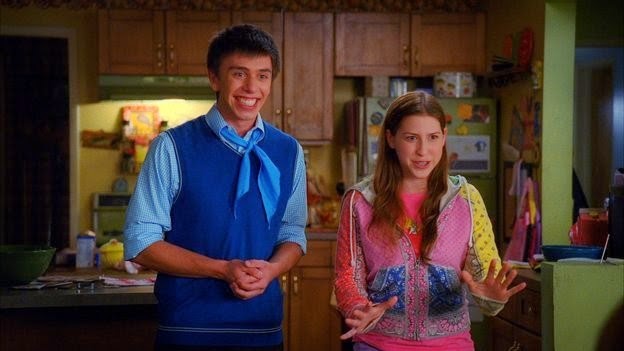 I've got news for you Brock: sexual orientation matters a great deal to the LGBT kids who are told daily that no gay people exist.

Brock and other teen favorites, such as Nickelodeon's Nick Cannon, are involved in an anti-bullying program where they talk to kids in classrooms via Skype.

That doesn't make up for being an Uncle Tom.

Ok, the word "gay" was never used.  It still must never be spoken, only implied.

In the year 40,000, the President of Earth calls Barbarella (Jane Fonda) into action: a rogue scientist  named Durand Durand has brought a "weapon" to the distant, unexplored planet Tau Ceti.  This could cause the residents to experience neurotic aggression!

So she and her sentient gay spaceship ("Prepare to insert nourishment") travel to the distant planet.  She is captured by carnivorous children and rescued by a child-catcher (Ugo Tognazzi).  He asks to have sex with her.

Then she meets a blind angel, Pygar (John Phillip Law, star of Strogoff), who has lost his will to fly.  She restores it by having sex with him.

Then they are both captured by the Great Tyrant (Anita Pallenberg), who calls Barberella "my pretty-pretty" and Pygar a "winged fruitcake."  They refuse her request for sex. 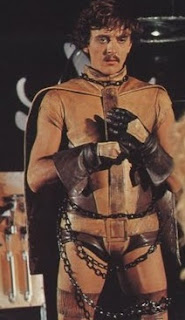 Barbarella is rescued by the rebel leader Dildano (David Hemmings), who wants to have sex with her.

Recaptured, she is placed in the Excessive Machine to be orgasmed to death.

After a few more sexploits, the planet is destroyed. Pygar flies Barbarella, and the Great Tyrant to safety.  "Why did you rescue her, after all the terrible things she did to you?" Barbarella asks.  "Angels have no memory." 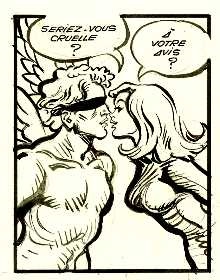 Barbarella is naked a lot, but with the outrageous costumes, sets, and dialogue -- "I'll do things to you that are beyond all known philosophies!"; "De-crucify him, or I'll melt your face!" -- you barely notice. Besides, there is a lot of male nudity, too, substantially more than in the French comic book series.

And oblique references to same-sex desire and practice that make you think that there might be gay people in this 1960s universe.

How did a hetero sex comedy turn into a gay classic?

Jane Fonda, by the way, is a strong gay ally.
Posted by Boomer No comments: