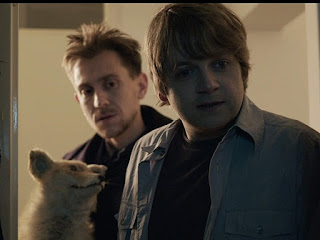 Toon (pronounced "tone") is a Dutch dark comedy about a painfully shy jingle-writer (Joep Vermolen) who becomes an internet sensation when he picks up a guitar during his birthday party and sings "I Don't Want to Be Here."

Episode #1:  Toon is insulted by his bosses, Robbie and Dylan (Robbert Bleij, Arend Branleight).  Later, he is walking down the street when a man says hello.  He does a double take.  Obviously gay!

At his birthday party, a woman flirts with him, and he looks bored and tries to get away.  Obviously gay!

But I'm not going to be fooled again.  I'm sampling several episodes to see if Toon really is canonically gay, or it's just a tease to draw in viewers.

Episode #6:  Toon and Nina (the girl who flirted with him,now his video partner) are roped into taking part in a charity fundraiser.  Toon's roommate moves out: "It's been fun,but..."  Toon is heartbroken.

Episode #8: Season finale.  No references to boys or girls. 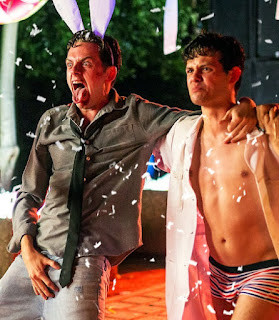 Episode #2:  Toon plays in a video game championship.  His opponent, Jurriann (Alex Hendrickx, right), keeps saying things like "You're so famous, you must get lots of girls!" "Right...girls!"  Toon says sardonically.

Wait -- does that mean he's gay, or that he's straight and doesn't get a lot of girls?

Later, Jurriann invites Toon into a contest to see who will go home with  Becky, the newscaster who covered their game. He goes to tell Becky what they are up to, and she suggests that he pretend to pick her up.  He has no idea how to flirt with girls, so she explains how.

No idea how to flirt with girls? Gay!

Or...is he so "socially inept" that he likes girls but doesn't know how to talk to them.

Episode #6:  Toon and Becky are living together as roommates, although sometimes she flirts with him to give the gossip vlogs something to talk about.  He helps throw a bachelor party for Dylan, apparently now his manager, who says a lot about the importance of friendship, soul-mates, and then kisses him. Then he vanishes into the bathroom, and Toon leaves.

The third member of their party is Robbie, dressed like a pink fairy.  I don't know why. 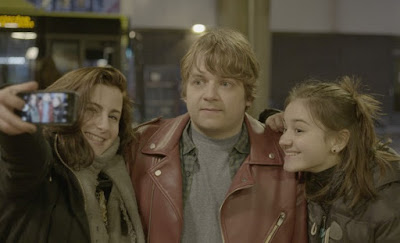 The series finale.  Toon, this is your last chance!

He and a girl arrive at a hotel room. Toon hugs their chaffeur. What's up with that?

Apparently the meeting is just for show: they are sitting on different beds, talking about how loud the music is in the next room.

And then...and then...Toon talks about how much he loves her.  Then they kiss.

It took 16 episodes, but Toon has finally been outed as straight.

Are there really men like that, who are heterosexual but shy about talking to girls?

They should have heterosexual cruise bars. You don't need to say anything -- just make eye contact or give attitude.
Posted by Boomer 2 comments: 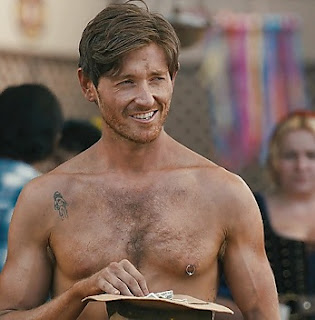 Remember Scrubs (2001-2010), about some new doctors or interns or something who clash with the medical hierarchy?  I don't remember much about it, except for the jerk doctor who disapproved of exercise.    Say what?

But the premise has been reprised a decade later in Carol's Second Act (2019), starring Patricia Heaton of The Middle as a middle-aged woman -- actually a senior citizen -- who decides to go to medical school.

It beats eating cheesecake and hooking up.  (Depressing fact -- The Golden Girls has been off the air for almost 30 years).

According to the Medical School Central website, the average age of new medical students is 24, but every year 10-12 people over the age of 50 are admitted.  Hey, 10 years at your dream job is better than no years.

Carol is now in her internship year, clashing with the medical hiearchy and den-mothering the usual brood of interns:

Lucas Neff of Raising Hope and American Princess as Caleb (top photo), who got into medical school only because his family is rich, and therefore has an inferiority complex.  He gives his pronouns ("he, him"), which causes a burst of laugh track laughter.  Being sensitive to gender diversity is humorous? 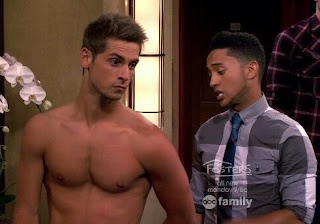 Jean-Luc Bilodeaux of Baby Daddy as the overachieving Daniel (the one having his butt checked out), who graduated at the top of his class and has already been published in medical journals, but knows nothing about practicing medicine.

I love the name Jean-Luc Bilodeaux.  For some reason it reminds me of Bluto from the Popeye cartoons.

Sabina Jalees as Lexie, a first-generation college student, and a gay Muslim.  At least, the actress is a gay Muslim.   Her character self-identifies as "queer."

Wait -- I thought Patricia Heaton was homophobic.  The Middle had a gay recurring character, but they never actually said the word. 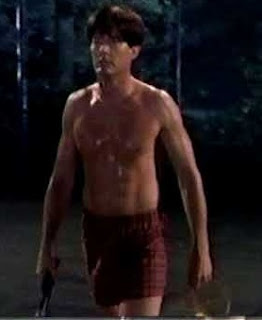 1.  Dr. Frost, the dorky chief of staff, played by a shockingly old Kyle McLaughlin (depressing fact: Twin Peaks has been off the air for nearly 30 years).

3. Nurse Dennis, played by Cedric Yarbrough of Speechless.  I hope they're not planning any "male nurse" jokes.


I saw the first episode, because it was free on Amazon Prime.  Carol chirps, Dr. Jacobs glares at her and gives her a humiliating assignment, she breaks the rules and saves the day, Dr. Jacobs admits that she might be a good doctor after all.

Yawn.  I've only seen this a thousand times before, with doctors, reporters, teachers -- you name it. 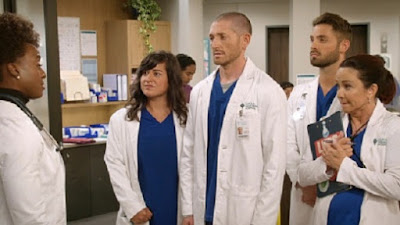 According to the IMDB, the second episode is more of the same: chirp, humiliating assignment, break rules, save the day, "you might be a good doctor after all."

Third episode.  More of the same.

I'd give it a miss, but I want to hear more about the gay Muslim character.  And I know it's a long shot, but I'm hoping that Daniel or Caleb turn out to be gay.

Or take their shirts off, now that we can't see Axl in his underwear anymore.  Depressing fact: The Middle has ended.
Posted by Boomer 2 comments: