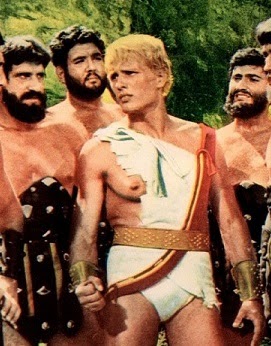 Born in Rome in 1938, Giuliano Gemma started out as a circus aerialist and stuntman before breaking into the sword-and-sandal craze of the 1960s, but not the usual deadly serious "bodybuilder saves civilization" type. Satire, with a bit of humor, such as My Son, the Hero (1962), about a mild-mannered Greek god whose power comes from his mother. 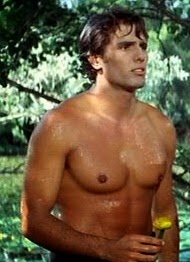 And buddy-bonding, as in Hercules Against the Sons of the Sun (1964), which sends an anachronistic Hercules (Mark Forrest) to the land of the Incas, where he helps Prince Maytha (Gemma) regain his throne.

Or Angelique (1965), where he plays the buddy of the guy who gets the girl. 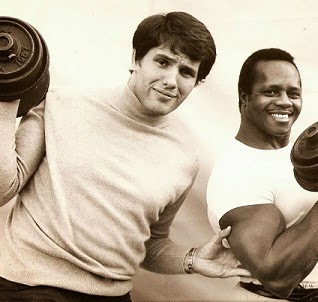 Later, like many peplum stars, Gemma moved into spaghetti Westerns, playing an unusually chipper antihero in A Pistol for Ringo (1965) and The Return of Ringo (1965).

Here, he fondles the arm of a friend.

In Vengeance of the Vikings (1965), Gemma plays a Viking prince who travels to America and finds, of all things, a Greek guy, who teaches him about wine while helping him fight off assassins.

Did you think you were buying a ticket to the Clint Eastwood classic For a Few Dollars More? (1965).  No, sorry, you're seeing For a Few Extra Dollars (1966), with Gemma as Old West savior Gary Diamond. 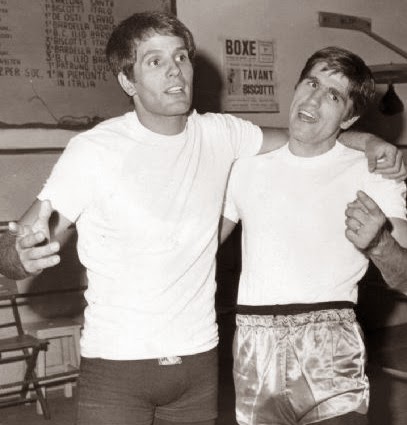 Alive or Preferably Dead (1969), about two brothers (Gemma, Nino Benvenuti) who can't stand each other. Benvenuti is the one on the left, with the bulge.

Amigo, Stay Away (1972), about two sworn enemies in the Old West (Gemma, George Eastman) who keep having to work together. 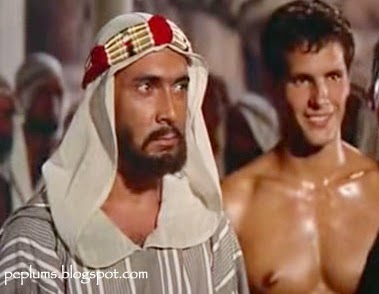 Even Angels Eat Beans (1973), about a wrestler (Bud Spencer) and an ice cream vendor (Gemma) mistaken for hit men by a gangster who wants to hire them.

He returned to peplums to win an Italian Oscar for Desert of the Tartars (1975). 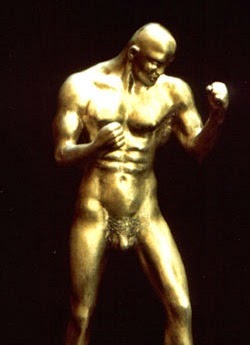 Gemma continued working in Westerns, cop series, and costume dramas until his death in an auto accident in 2013 (one of his last roles was in the tv miniseries Pompeii).  Late in life he discovered a new passion for sculpture.  He cast this bronze image of a muscular, naked boxer.

With all of this buddy-bonding, arm-fondling, and nude boxers, one obviously wonders if Gemma was gay or bi in real life?  No idea, but in an interview, he traced the archetype of the gay cowboy back to his buddy-bonding roles of the 1960s.

Jelle Florizoone: Is It Weird to Play Gay? 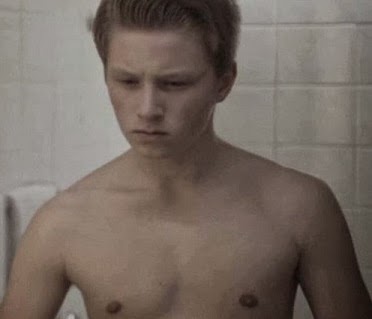 When Belgian actor Jelle Florizoone starred in the gay-teen-angst North Sea Texas (2011), the media went wild with questions:  "What's it like to play a gay guy?  How weird was it?  How disgusting was it?"

I hate interviews like that.
1. They assume that every other role is easy to play.  You want a secret agent?  A Martian?  A talking frog?  Not a problem.  But gay people are so bizarre that it's almost impossible for an actor to get into their characters, and so disgusting that it's a pain for him to even try.

2. They assume that teenagers must necessarily be heterosexual.  Same old story: no gay juveniles can possibly exist.

I don't know if Florizoone -- now a member of the boy band 5th Avenue -- is gay in real life or not, but he certainly doesn't think that gay roles are "weird" or particularly difficult.

After North Sea Texas, he starred in the short Headlong (2012), about a teenage ballet dancer stuck in a hotel room in a distant city, lost and alone until he falls "headlong" for a boy. 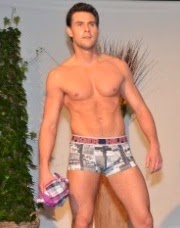 Even his starring role in the Flemish children's program ROX (2011-) doesn't strike me as heterosexist.  It's about three secret agents: the dashing Xavier (Jeremy Vandoorne, left), the glamorous Olivia (Jana Geurts), and the brainy Rick (Jelle).   Plus their magical talking car, ROX. 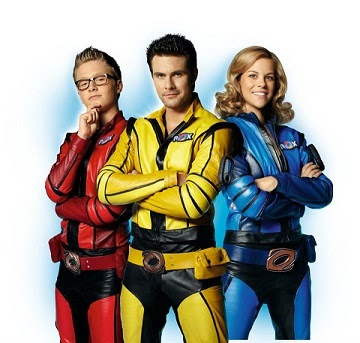 You can see it on youtube.  I've gone through a few episodes; even without speaking Dutch, it's not hard to follow the plot. And I don't see Rick getting involved in any hetero-romances.
Posted by Boomer 1 comment: 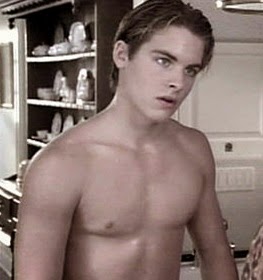 One of the last of the old-style teen idols, Kevin Zegers was born in Canada in 1984, and did some modeling, tv commercials, and guest roles as "kid" before hitting adolescence.  Then he achieved something amazing: an entire teen idol career with no tongue-lolling, swooning, girl-crazy hetero-horny roles.

His first fame came in the Disney fantasy Air Bud (1997), about a oddball outsider boy whose dog plays basketball. There were sequels in 1998, 2001, and 2002, with the dog playing football, soccer, and baseball, respectively. Not a lot of heterosexual machinations, even in the 2002 version with Josh (Kevin) away in college and his little sister taking over. 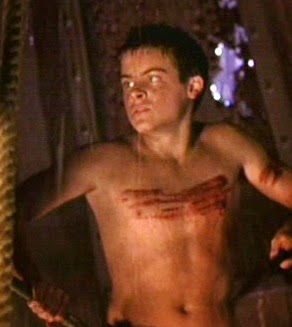 After that, Kevin was the toast of the town, but he continued to play "queer" oddball outsider roles with little or no interest in girls, as in Shadow Builder (1998), about a boy who may be a saint or may portend the end of the world.

Nico the Unicorn (1998) is not a heroic fantasy, as the title suggests, but about a oddball outsider boy, crippled when his leg was shattered by a drunk driver, whose horse gives birth to a unicorn.

Treasure Island (1999) is, of course, famous for having no women; it's a testosterone-laced buddy-bonding pirate adventure.

Not until Komodo (1999) does one of Kevin's characters get a girlfriend. 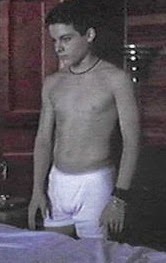 Even Four Days (1999) is more about buddy-bonding than hetero-romance, as The Kid becomes the unwitting pawn in his father's bank heist.


As Kevin bulked up, his shirtless and underwear scenes became more common.  His phyique was plastered all over teen magazines.  Fan websites gushed "Do you know how strong Kevin is???  He can lift 200 pounds right over his head!!!" and offered separate series of photos of his biceps, shoulders, chest, abs, and legs.  Maybe this obsessive display of his muscles was a counterbalance to the lack of displayed heterosexual interest in his movies and tv guest spots. 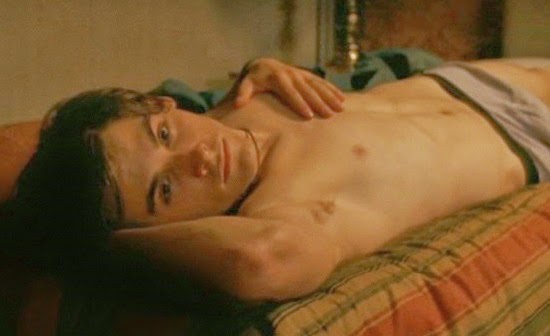 Time Share (2000) gives Kevin's character a girlfriend, but in MVP: Most Valuable Primate (2000), he just has a younger sister.

Fear of the Dark (2003) is about an older brother and younger brother.

In adulthood, Kevin went on to play many gay-vague and "gay turned to straight" roles.

The Wonderful Adventures of Nils: A Boy and His Goose 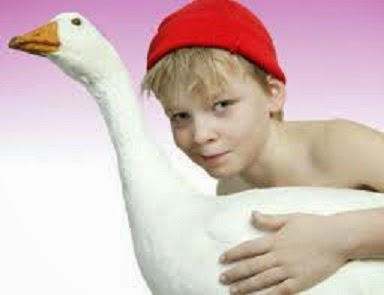 Remember Leda in Greek mythology and the Yeats poem, who had a thing for swans?

14-year old Nils Holgersson had a thing for geese. 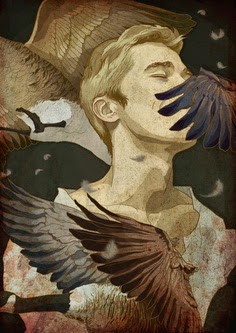 The other geese, especially cranky matriarch Akka, disapprove of the two outsiders, but Nils and Akka prove to be valuable allies during the dangerous and difficult journey.

Finally Nils matures enough to return to human form.  He is now a man, but he no longer understands the language of the geese, and he must abandon his friends (picture by Taya Strizhakova).

There's a lot of gay symbolism in the "queer" boy trying to fit in.

The books were envisioned as school texts: Nils visits every province of Sweden, and hears about their geography and economic output.  But kids -- and adults -- loved them.  They are still best-sellers in Sweden. 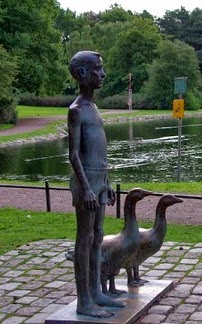 Nils has been immortalized in a dozen statues, on a postage stamp, and on the back of the 20 krona bill.  There have been five film versions of his adventures, in Russian, Swedish, Japanese, and German. 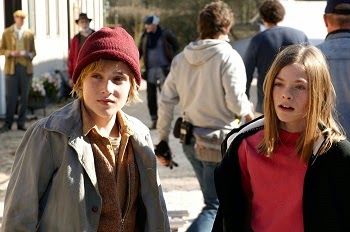 Otherwise Nils is wonderfully free of the girl-craziness that besets most other adolescents in children's literature. 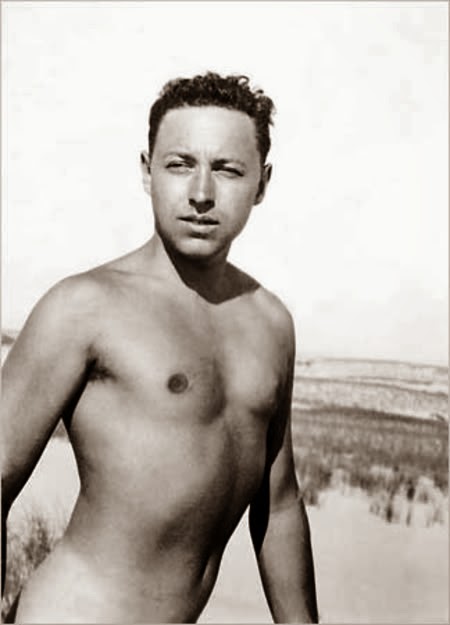 Tennessee Williams (1911-1983) was one of the most popular playwrights of the 1950s.  He won two Pulitzer Prizes and was nominated for four Tony Awards.  Film versions of his plays topped the charts at the box office. Though his main characters were usually emotionally-fragile Southern belles with dark sexual yearnings, he introduced gay- or gay-coded characters everywhere.  Unfortunately, they were usually off-camera, just discussed by the other characters.  And they were usually dead or dying.

2. Allan (off-camera) in A  Streetcar Named Desire (1945).  Why is faded Southern belle Blanche so crazy?  Long ago she married Allan without realizing that he was gay.  When she found out, she confronted him, and he ran outside and killed himself.  In the movie version, she just calls him a "poet," and doesn't explain why he got so upset. 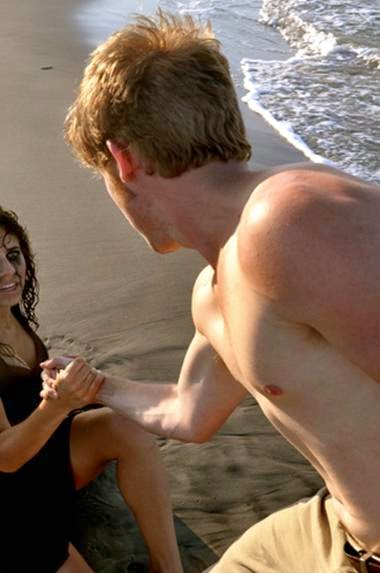 3. Rosario in The Rose Tattoo (1951).  Three years after he dies, his ex-lover Alfaro shows up and begins an affair with his widow, the emotionally-fragile Serafina. He gets a rose tattoo on his chest in Rosario's memory, and the disgusted Serafina throws him out.  They reconcile. (Shown: William Vaughan as Alvaro in a 2012 production at the University of South Carolina.)

4. Kilroy in Camino Real (1953). A gay American G.I. arrives in the backwater town of Camino Real, gets sick, and meets various historical and literary characters, most of whom try to seduce him, before he dies (but not to worry, his spirit goes off with Don Quixote as his new squire). 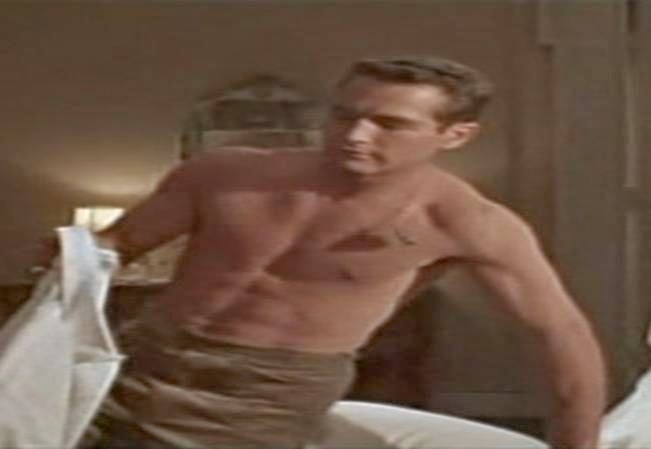 5. Skipper (off camera) in Cat on a Hot Tin Roof (1955), who had an affair with Brick (left: played by Paul Newman in the 1958 movie).  When Brick's wife Maggie found out, she confronted Skipper, who rushed out and killed himself  (in the movie, she just calls him "weak.").

6.Sebastian (off camera) in  Suddenly, Last Summer (1959): the emotionally-fragile Catherine acted as a procurer for his affairs.  But then the young men he had sex with turned on him, and ate him. (In the 1959 movie, no face is shown.) 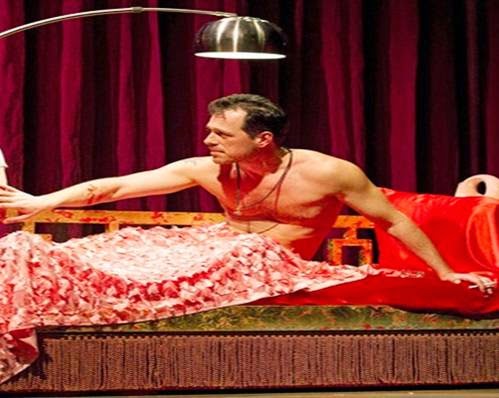 7. Christopher in The Milk Train Doesn't Stop Here Anymore (1963).  Gay wannabe actor is taken by an emotionally-fragile elderly woman. This time she's the one who dies. (Shown: Darren Pettie on Broadway.)

8. Mark in In the Bar of a Tokyo Hotel (1969).  A gay, depressed artist, he rolls around naked on his canvas and has a nervous breakdown, while his emotionally-fragile wife hangs out at a Tokyo hotel, trying to pick him men.  Finally he dies.

Why fill his stages with dead and dying gay guys?  Though gay himself, Williams was a product of his era, and thought of same-sex desire as dark, disturbing, and dangerous.  Something to be repressed or hidden away.  Something that would lead inevitably to death.
Posted by Boomer 3 comments: