The Legend of the Heterosexual Hercules 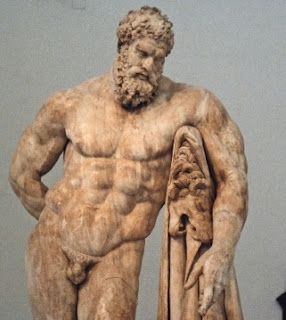 The ancient Greek hero Heracles (Hercules in Latin) was half-god, super-strong, and gay.  He had female lovers, too, but myth and epic laud the male:

Iolaus, his charioteer.  The three great gay couples of the ancient world were David and Jonathan, Damon and Pythias, and Heracles and Iolaus.  Edward Carpenter named his anthology of gay verse Iolaus.

Nireus, the most beautiful man in the world.  It was quite a coups for Heracles to win him.

Iphitos, whom Heracles won in an archery contest in lieu of a princess.

Hylas, whom Heracles won by saving the king from a barbarian invasion.

So what do contemporary filmmakers do with the ancient hero? 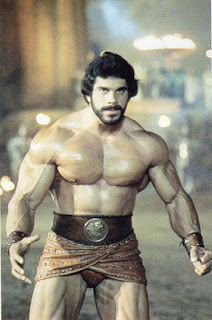 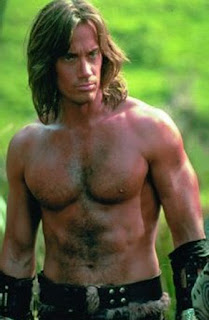 Hercules: The Legendary Journeys (1995-99) sends surprisingly un-buffed Kevin Sorbo out with Iolaus.  But don't get excited: they're explicitly just friends and intensely hetero-horny. 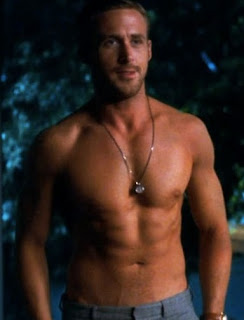 Young Hercules (1998-99) sends Ryan Gosling as a teenage Kevin Sorbo to a hero academy, where he hooks up with Iolaus, Jason, and Lilith (from Jewish folklore?).  Guess which one he romances. 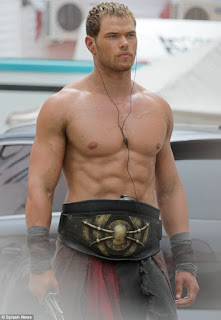 The Legend of Hercules (2014) stars Kellan Lutz as a shirtless gladiator Hercules trying to "win the woman he loves."  The whole plot involves hetero-romance.  Iphitos appears as Iphicles, his brother, who betrays him. 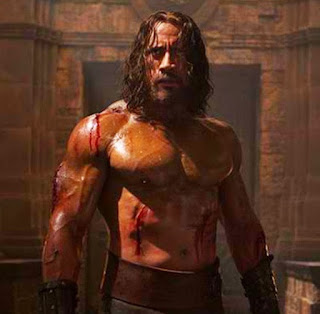 Hercules (2014) stars Dwayne Johnson as a mercenary leader who wins a princess.  Iolaus appears as his nephew.

Viva Las Vegas: Elvis and Cesare Danova Find Each Other 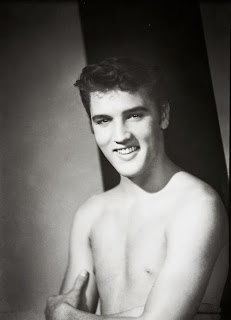 Viva Las Vegas (1964) is a comedy-drama produced during the height of early-1960s cool, when Vegas still meant gambling, booze, and the Rat Pack.  And at the height of the 1960s Italian craze.  How could it go wrong?

Two racing enthusiasts, working-class country boy Lucky (Elvis Presley) and elite Italian Count Elmo Mancini (Cesare Danova) accidentally encounter each other at an auto garage.  They know each other by reputation, but have never met before.  Mancini offers Lucky a job driving his car in upcoming Las Vegas Grand Prix, and Lucky refuses.  He will drive his own car.  They will be competitors. The association would usually end there, but not in Lucky Las Vegas. Both guys have fallen in love at first sight with a girl named Rusty (Ann-Margret), but they don't know much about her.  They decide to join forces to try to track her down.

They spend the next several days together, hitting the Vegas nightspots, ostensibly looking for Rusty, but obviously having a wonderful time without her. 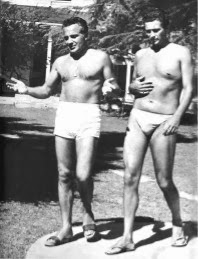 Then they find her.  They are in Mancini's hotel room, getting dressed -- wait, have they been sleeping together?  -- and Elvis says it's time to say goodbye.

Only he doesn't leave.

The two "competitors" spend the rest of the movie vaguely competing over the race and the girl, but it's obvious that they don't care much who wins, as long as they can cling together like long-lost brothers. 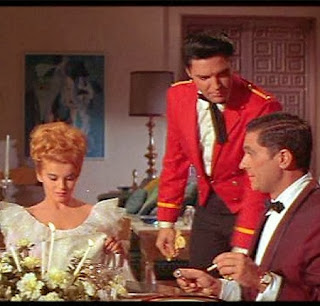 The final scene involves a wedding, but Mancini, Lucky, and Rusty are so tightly enclinched that one is not entirely certain who is marrying whom.

The gay subtext is blatant, yet so dependent upon intonation and gesture, that one wonders if Elvis and Cesare Danova were really into each other.  Elvis has long been rumored to be bisexual.  I haven't heard a lot of gay rumors about Cesare Danova, only that he became a born-again Christian in the 1970s, and had his tombstone inscribed with "Praise the Lord."

The music is energetic, and the dance numbers are great. Ann-Margret steals the show.  Highly recommended.

Fondling the Biggest Schlong in Hollywood 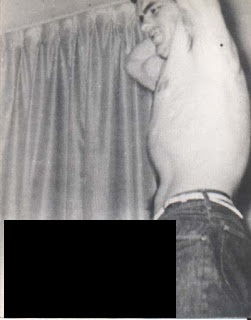 In one of your stories, you said you didn't think Jackie Coogan would be talking about the gay hookups of his youth with his 12-year old grandson, Keith Coogan.

Well, my Grandpa Sammy talked about all that, and more!  He was born in 1922, but didn't come out until 1990, when Grandma Lonny died.  After that, there was no stopping him -- he moved to Palm Springs, cruised in leather bars, went to bear parties, joined Gay and Grey clubs --  nonstop schmoozing and screwing.  And whenever my boyfriend and I drove up from West Hollywood to visit, he told us the raunchiest stories about his youth. 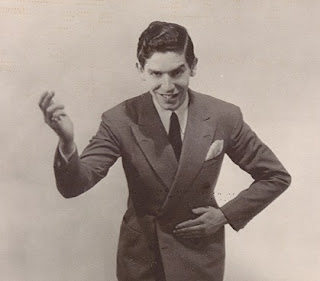 Here's one about Milton Berle's penis.

2. Having the biggest penis in Hollywood.  It was so famous, it was even mentioned at his funeral.] 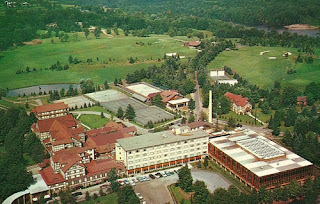 When Sammy was in high school in Queens, many Jewish boys got summer jobs at the resorts in the Borscht Belt, Sullivan County in the Catskills.  He was an all-around athlete and a state tennis champ, so he landed a job as a tennis instructor and life guard at Grossinger's, the biggest and most elegant of the resorts.  35 buildings, indoor and outdoor pools, three restaurants, big name acts like Glenn Miller and George Burns.

And Milton Berle, the 30-year old comedian who had been playing the Borscht Belt since he was 15, plus appearing on the radio and in movies like Radio City Revels.  He had a standup comedy act involving nonstop patter, joke after joke that had the audience rolling in the aisles.  When they weren't gazing at him with that vacation-enhanced horniness -- he was goodlooking, well-built -- he filled out a swimsuit beautifully

Berle always had a girl or two on his arm, but Sammy still hoped he was queer.

The rest of the story, with nude photos and explicit sexual content, is on Tales of West Hollywood.
Posted by Boomer No comments: 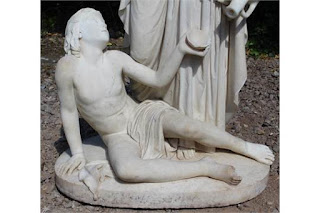 You remember the story of Ishmael in the Book of Genesis:  he was Abraham's oldest son, born to Sarah's handmaiden Hagar; but Sarah wanted her own son Isaac to be heir, so she had Ishmael and Hagar cast out into the desert to die.  When they were dying of thirst, an angel appeared and made a well magically appear.  Eventually they settled in the desert of Paran, where he married and had twelve sons, the ancestors of the twelve tribes of the Arabs.

Ishmael was sixteen years old when he and his mother were cast out, an adult in ancient society, but a lot of artists like to make him a baby or a little boy, to emphasize the pathos. 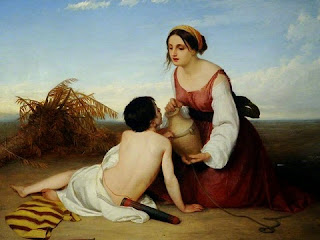 And to avoid having to draw muscular men. 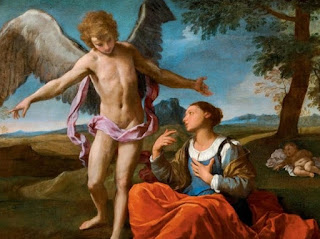 Simone Cantarini (1612-1648) compromises.  Ishmael is that chubby baby in the background, dying of thirst while a naked, muscular male angel is appearing to Hagar. 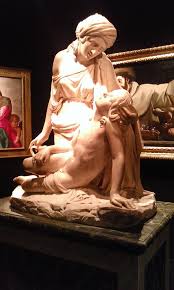 Others, like Lodovico Caselli (1817-1862) have the naked, dying youth wrapped in his mother's arms, a sort of Pieta. 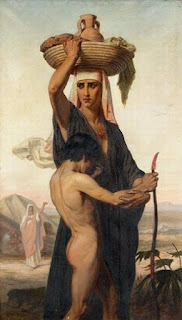 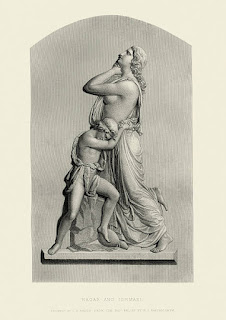 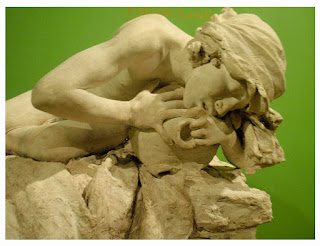 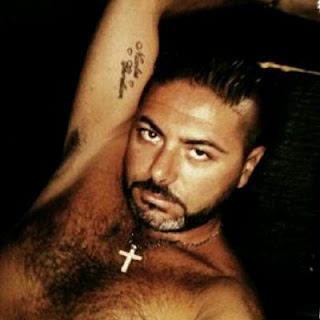 In the 1994 movie Abraham, Ishmael is played by Giuseppe Peluso
Posted by Boomer No comments: 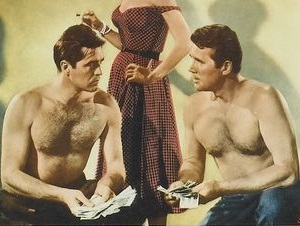 The Internet Movie Database tells us that Steve Cochran (1917-1965) was "all man," by which they mean "not gay." As evidence:
1. He grew up in Wyoming
2. He was kicked off his college basketball team for hanging out with  ladies.
3. He worked as a cowboy before getting his start in Hollywood.
4. He had a very, very, very hairy chest.
5. He had a very, very, very large penis (ok, that one's not from the IMDB).
6. He mostly played villains and gangsters.
7. He had sex with lots of  ladies. 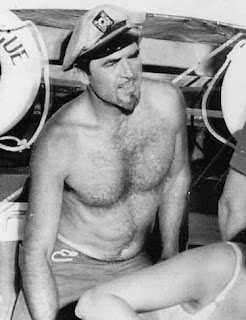 8. He was married three times.
9. He died while on a boating trip with an all-girl crew. 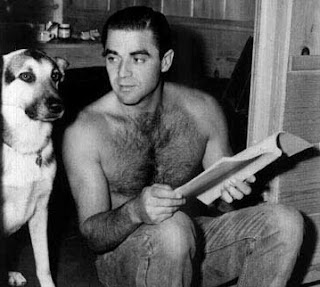 The Chase (1945). He plays Eddie Roman, a gangster who is betrayed by his chauffeur/gunsel Chuck Scott (Bob Cummings). I haven't seen any of Steve's other films, but film noir often included a hint of homoerotic desire between the gangsters.

Then there's The Beat Generation (1959), which has nothing to do with the literary movement of Jack Kerouac and Allen Ginsberg; in search of a serial rapist, detective Steve immerses himself in the seedy, decadent, gay-vague world of the Beatniks.  Sort of like Al Pacino's descent into the "gay world" in  Cruising twenty years later.

Even someone who is "all man" invariably has a gay subtext or two somewhere in his career.

The Gay Artist for the Catholic Schoolboy Comic Book 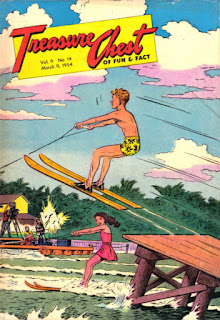 A Treasure Chest of Fun and Fact was a Catholic comic book, published every two weeks during the school year from 1946 to 1972, meant to be given away at parochial schools.  Its main emphasis was religion and patriotism (since American Catholics in those days were often stereotyped as anti-American, in the pocket of the Pope).

But there were lots of humor and adventure stories, too -- sports, jungle adventures, pirates -- which made for some odd juxtapositions:

"Get to Know the Sacraments" oddly juxtaposed with "El Vaquero the Cowpunching Bear."

The history of the Canadian Mounted Police juxtaposed with "But Aunt Eileen, does modern life help to destroy true values?" 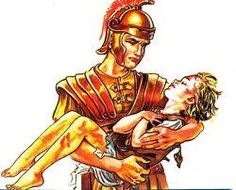 My favorite juxtaposition is from the November 19, 1959 issue.  "Tarcisius Protects the Holy of Holies," an adaption of the novel Fabiola by Cardinal Wiseman.  Tarcisius was a twelve-year old boy who was trying to save the Blessed Sacrament from desecration, when an irate crowd beat him to death.

How'd you like to read that over your Corn Flakes in the morning?

Next was a humorous story about ice hockey. 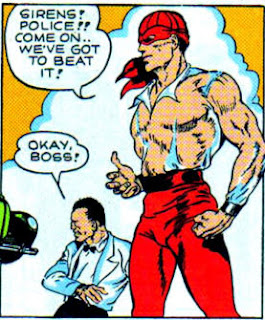 Many stories were drawn by Reed Crandall (1917-1982), a Golden Age comic book artist who also drew such superheroes as the Ray, Dollman, Blackhawk and Ka'anga Lord of the Jungle, and invented Firebrand, a muscleman in an invisible shirt.

Why invisible?  So you can perv on his pecs, duh! 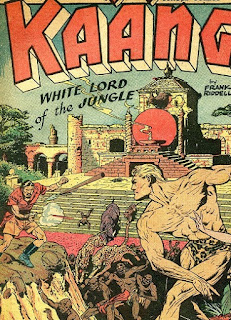 His beautifully detailed drawings of muscular men inspired a generation of beefcake artists, including Frank Franzetta and Boris Vallejo. 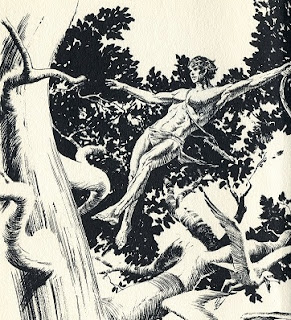 After Crandall graduated from the Cleveland School of Art in 1939, he moved to New York with his mother and sister to seek work in the fledgling comic industry.  Eventually they moved back to Wichita, and Crandall lived by himself, a "confirmed bachelor," for many years.  He died in 1982.

I imagine that George A. Pflaum, the publisher of the Treasure Chest, never realized that one of his chief contributors was a gay man.