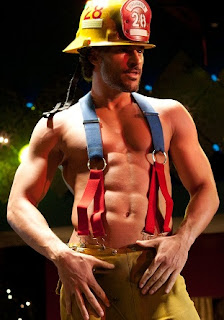 Joe Manganiello, who starred as "Big Dick Richie" in Magic Mike (2012), is a strong gay ally, speaking at the HRC fundraiser in 2011, presenting buddy Matt Bomer (below) the GLSEN "Inspiration Award" in 2012,  hanging out with gay friends, being relaxed, even flirty with gay fans.

But is there any gay content in his on-screen work? 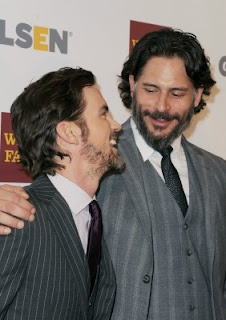 Then he played Flash Thompson in Spider-Man (2002).  I walked out after Tobey Maguire made his heterosexist "all stories are about boys and girls" speech.

The evening soap One Tree Hill (2008-2010): he played Owen Morello, a former alcoholic who becomes a bartender and dates lots of women. Nope.

How I Met Your Mother (2006-2012), about a guy taking an interminably long time to tell his kids how he met their mother: he played Brad Morris, who buddies with Marshall, although he dates women.  He also says that he was "born a little different," so he may be intersexed.  Some queering there. 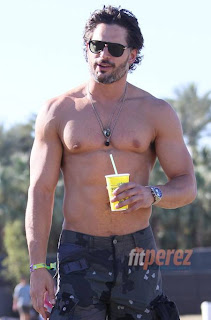 Then we get to some gay-positive projects:

So NoTorious (2007), about the "real life" Tori Spelling: he played Scott, her crush who turns out to belong to a weird cult.  But there's a gay character, Sasan (Zachary Quinto).

True Blood (2010-2013), about modern-day "out" vampires, with Martin Spanjers and Ryan Kwanten: he plays Alcide, head of a werewolf clan, who has sex with women.  But there are several gay characters, mostly vampires, and the gay-vampire symbolism is played to the hilt. 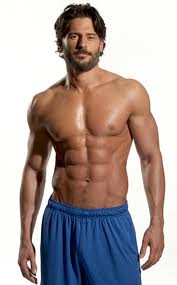 So: No gay characters, but lots of gay-positive work.

Maybe his man-mountain physique disqualifies him from gay roles, since gay men are still stereotyped as soft, fragile, delicate, and wispy.