Is "Lost in Space" Worth the Trip? 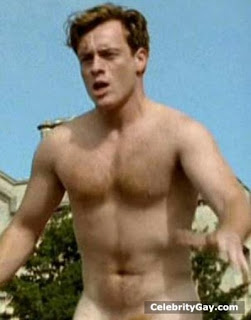 But you really had to be about eight years old to enjoy it without noticing that it was Gilligan's Island in space: seven stranded castaways and steady stream of visitors, space pirates, space gypsies, space hippies, and miscellaneous weirdos, who could help them get home,but don't.

There have been a number of remakes, pastiches, and sequels: a 1973 animated movie, with different characters, except for Dr. Smith; a 1998 movie stunt-casting Matt LeBlanc as pilot Don West; a 2004 movie that loses the family in the midst of an alien invasion; a 2015 sequel that gets the Robinsons back to Earth; and the latest, a reboot series on Netflix.

Is the latest worth the trip? 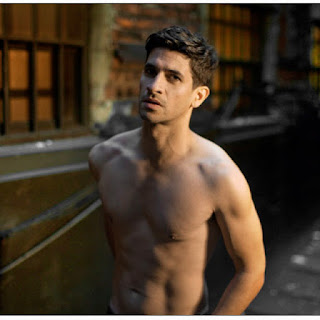 The campiness is gone.

The humor is gone.

The aliens are gone, except for the Robot, who looks like a man in a space suit.

The strange new worlds are gone.  The Robinsons and other survivors are stranded in Yosemite National Park (actually several provincial parks in British Columbia).

What's left is Lost: the castaways struggle to survive, forming alliances, promoting hidden agendas, driving around in their runabouts, having conversations about the importance of family.

The heterosexual nuclear family is everything.

No gay characters, no gay subtexts.  The bumbling, gay-vague Jonathan Harris as Dr. Smith has been replaced by the tough, no-nonsense Parker Posey.

I saw Victor Dhar and Vijay Dhar in the cast, and dared to hope that they were a gay couple.  Nope, father and son.

No beefcake, hardly any men.  The original had some cute guys to look at, John Robinson, Don West, and for the kids, Will Robinson..  The remake does cast several hunks: Toby Stephens (top), Raza Jaffrey as Victor Dhar  (second photo), and Ignacio Serricchio as Don West (below). 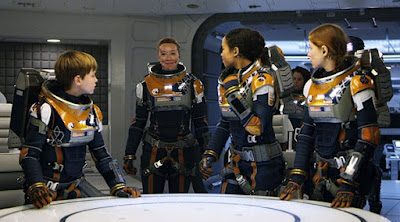 But what you see on screen is mostly women and a little kid (12-year old Maxwell Jenkins as Will Robinson).

Discussing the importance of family. 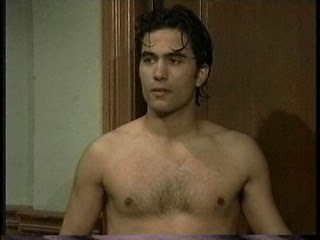 Executive producer Ken Burns has also produced: How Playboy Changed the World;  Holly's World; The Bunny House; The Girls Next Door; Bridget's Sexiest Beaches; and Inside the Playboy Mansion.

So I'm guessing that gay characters and beefcake are on the bottom of his list of priorities.

Right next to creating an interesting plot.
Posted by Boomer 3 comments: 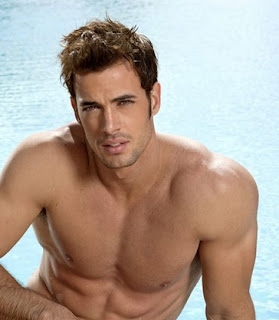 I really dislike advertising mascots who belong to the group that is being eaten.  There's something grotesque and ghoulish about sentient beings proclaiming how good they taste after being killed and cooked. 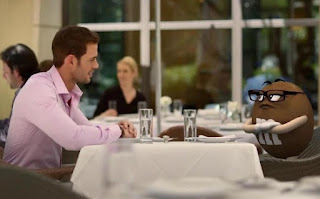 They are eager to participate in human society.  But every time they make friends, get jobs, get invited to parties, or in this case, go on a date with William Levy (top photo), they discover that their human "friends" actually want to eat them. 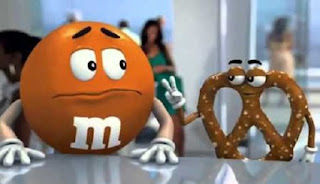 The M&Ms follow stereotypic gender roles, with females distinguished from males by their eyelashes and lipstick.  And there are occasional homophobic jokes, as in this commercial when the Orange M&M (Eric Kirchberger) discovers that a pretzel person will be going inside him. 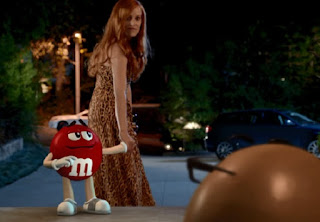 But there has been at least one M&M commercial with a bisexual text.  The Brown M&M (Vanessa Williams) is at a party, when her friend warns that she should stay away from the cruising Kristen: "She'll devour you!"

The savvy Brown M&M hooks Kristen up with the Red M&M (Billy West), who is shown being dragged off to what he hopes is a night of sex.

So the Brown M&M is into both men and women.  So is Kristen.  Or maybe she just has a fetish for pieces of sentient candy. 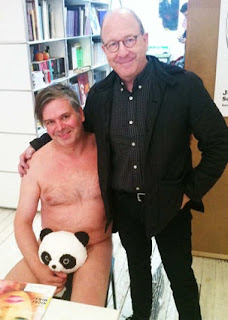 I don't know if Rob Pruitt, who plays the Blue M&M, is the same Rob Pruitt as the artist, but the artist (the naked one with the panda on his penis) is gay. 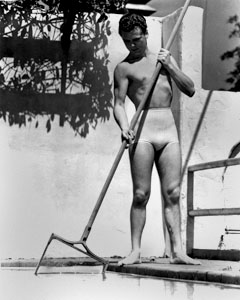 Born September 15th, 1922, the blond, pug-faced Jackie Cooper (left, with Freddie Bartholomew and Mickey Rooney) was the Ricky Schroder of his generation.  He got his start in Skippy, an adaptation of the comic strip about kids and dogs and the lunacy of adult society.  Jackie’s ability to shed realistic tears on cue (augmented by authoritarian directing: Taurog threatened to shoot his dog if he failed to deliver) won him a Best Actor Oscar nomination and catapulted him into the ranks of Hollywood royalty.  Sooky, The Champ, When a Fellow Needs a Friend, and Treasure Island followed, all box-office toppers.  By 1934 Jackie had his own fan magazine, half a dozen Big-Little book titles, and enough advertising tie-ins to shame Little Orphan Annie.

When Jackie hit pubescence, his box office draws declined, he re-invented himself la hard, masculine boys’ book hero.  He spent hundreds of hours at the gym, becoming an expert boxer, wrestler, and swimmer.  Movie magazines published photos of him in boxing trunks or skimpy swimsuits, displaying a hard-packed muscularity that made adult beefcake star John Garfield look downright scrawny.  Boys and men rarely appeared shirtless on camera in the 1930s, so instead Jackie wore tight dark-colored t-shirts that accentuated his v-shaped torso and mountainous biceps. 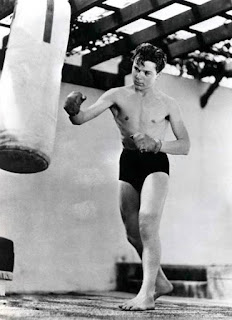 But even with a stunning boys’ book physique, he had become so thoroughly promoted as vulnerable, sensitive, and clingy that audiences simply wouldn’t accept him as tough, not even tough as a façade to hide a sensitive soul, so he was still asked to make with the waterworks in every picture.  And his pictures always featured homoromance, sometimes with heterosexual competition.

In Gangster’s Boy (1938),  Jackie plays Larry Kelly, a whiz-kid valedictorian, a letterman in every sport, yet also a fun-loving regular fella: he drives a jalopy covered with graffiti, plays the drums in a swing band, and litters his speech with goofy  expressions like “Who do you think you are?  Anyhow?”


He is stunningly attractive, so thoroughly desired by the guys, gals, teachers, and townsfolk that they always look like they want to rip his clothes off and ravish him on the spot, but he is devoted to his long-term “particular friend,” Bill Davis (future Broadway star Tommy Wonder).  “We’ll always be together,” Larry exclaims in a tender moment, and indeed after their high school graduation they plan to enroll at West Point together. 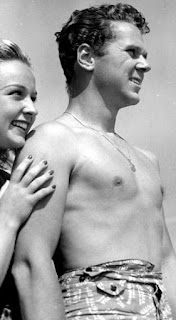 When Larry stars dating a girl, Bill seems to resent the competition: every time Larry swoops in for a kiss, he finds some excuse to interrupt them. He claims that pictures of girls are not allowed in cadets’ lockers at West Point: “You’re not supposed to waste time thinking about girls. . .you’ve got important things to think about!”  This may or not be true, but Larry does not challenge him.

The somewhat strained homoromance is further interrupted when Larry’s father, Knuckles, returns from an extended “business trip” up the river and confesses that he is actually a reformed gangster, just released from prison (perhaps the name “Knuckles” should have provided a clue).

When the townsfolk discover the terrible secret, they turn into slathering bigots.  No gangster’s son has the right to sully their town: they kick Larry out of the nightclub where he’s performing, refuse to applaud after his valedictory speech, and forbid their children from seeing him.  On the night of the Big Dance, Bill and his sister both sneak out of the house to see Larry, positioning themselves both as “dates,” as competitors for his affection.  But then the sister is forgotten, and the rest of the movie is traditional homoromance.

Driving home from the Big Dance, they accidentally hit and injure a small child.  Bill was at the wheel, but Larry claims responsibility, recognizing that an arrest for reckless driving will ruin either of their chances of being admitted to West Point.  But Bill is unwilling to let Larry sacrifice his career. 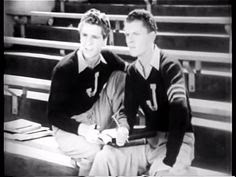 They posture and argue about who will take the blame until the judge uncovers the truth and exonerates them both, intoning that they have “learned a lot about friendship.”  But really it is the adults who have learned a lot. Larry and Bill already knew that they were ready to fight and die for each other, that their bond far transcended any momentary flirtation with girls.  Instead of a heteronormative clinch, the movie ends with the boys gazing at each other with eye-shimmering affection. 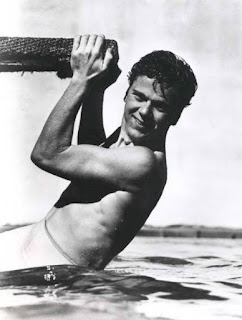 Within the Hollywood community, there was considerable speculation that the teenage Jackie’s sensitivity and his many friendships with girls signified that he was gay.  Whispered “anecdotes” had Jackie and former costar Wallace Beery caught with their pants down, and once at a nightclub, brash blue comedian Milton Berle spotlighted him as a “fag”, to gales of humiliating laughter.  These jokes and rumors apparently had a profound effect on Jackie.  In his later years, in spite of his otherwise liberal politics, he has made some mildly homophobic statements,  and he has never formed a close friendship with a man, perhaps out of a fear of what masculine intimacy might signify.