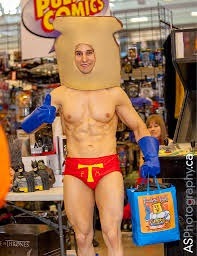 In the early 1990s, everyone in West Hollywood was watching the Nickelodeon cartoon series Ren and Stimpy (1991-1995), a parody of the idiotic animated cartoons of the 1960s.

Including the puerile commercials, like "Log" and "Powdered Toast."  Powdered Toast Man became a cultural icon of his own. 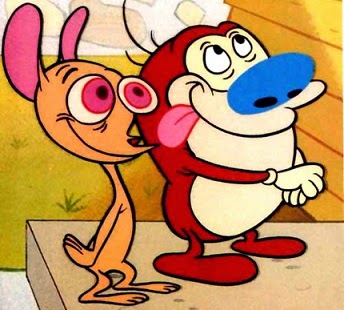 The main stars were Ren the viciously psychotic chihuahua and Stimpy the excessively stupid cat, who parodied cartoon duos like Ruff and Reddy and Yogi Bear and Boo Boo,

Except they were entirely obsessed with farting, nose-picking, and body fluids, often drawn in nauseatingly grotesque detail.

It was rather hard to watch, but we watched anyway, for the obvious gay subtexts.

Ren and Stimpy are presented as an overtly romantic couple. They share a house and a bed; they reminisce about their wedding, and Stimpy gives birth to a sentient fart, a product of their sexual union.

In some episodes, Stimpy is a stereotypical 1950's wife, passive and nurturing, responsible for cooking, cleaning, and ironing Ren's underwear.

Ren is socially and sexually the aggressor; in "Son of Stimpy", he tries to seduce Stimpy into the bedroom, but is rebuffed with "is that all you ever think about?" 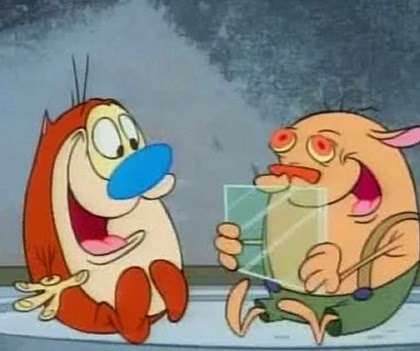 Sexual activity is also implied when Ren's cousin Sven Hoek visits, and Stimpy is instantly attracted to him.

But there was something off about subtexts.

It took awhile to realize that they were deliberate, and vicious.

The hints of same-sex activity and same-sex romance are presented as gross, disgusting, hard to watch.  Like sentient farts and "magic nose goblins."

Expected to elicit an uncomfortable laugh.
"Two dudes banging each other!  Sick!" 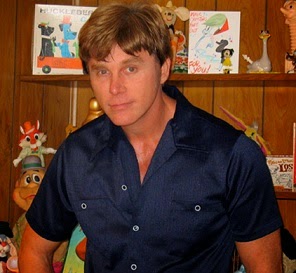 Stories about animator John Kricfalusi's homophobia began to emerge.  He made homophobic jokes and slurs constantly, and refused Robin Williams as a voice artist because "he's a fag."

After two seasons, he was fired -- not due to homophobia, due to his horrible working relationship with Nickelodeon.

In the summer of 2003, the Ren and Stimpy Adult Party appeared briefly on MTV.  This time there was no question: the duo was presented as a gay couple.

In cartoons that were unwatchable, unfailing grotesque and disturbing.  Ren and Stimpy live in a homeless man's mouth and then in a spittoon.
Posted by Boomer No comments: 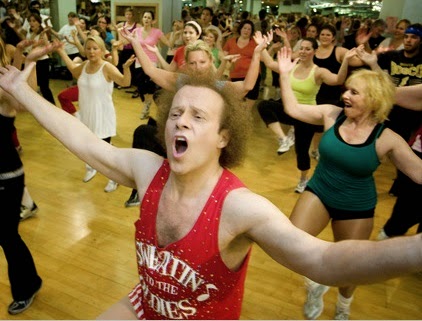 The Liberace of the 1980s was Richard Simmons, a fey elf in an Afro who led millions of overweight middle-aged women in energetic dance-style aerobics.

Growing up obese, Richard was dissatisfied with the diet and exercise regiments available: he believed that exercise should be fun and uplifting, and diets should be a joyful celebration, not dreary deprivation.  So he opened his own exercise studio, Slimmons, in Beverly Hills in 1969. He still teaches aerobics classes there every morning.

You can buy many of his Sweating to the Oldies DVDs, and about a dozen books, including Never Say Diet (you should say "live it!").


His program seems to be all about aerobics, or just getting off the couch and moving around.  Not a lot of weight training. 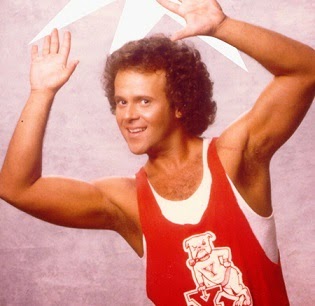 His effervescent personality and success in reaching the middle-aged female crowd led to a story on Real People, followed by guest appearances on game shows and talk shows, a four-year stint playing himself on General Hospital, numerous tv commercials, and his own Richard Simmons Show.

Richard had a few male fans.  He helped the morbidly obese Michael Hebranko drop from 906 to 200 pounds in 19 months, a feat which got Hebranko listed in The Guiness Book of World Records (unfortunately, most of the weight came back; he died in 2013 at 550 pounds).

There are many parallels between Richard Simmons and Liberace:
1. Aggressively feminine mannerisms.
2. A penchant for flamboyant costumes.
3. A fanbase composed mostly of middle-aged and elderly women.
4. A loud, obnoxious refusal to identify as gay. Liberace claimed to be straight, and sued anyone who implied different.  Richard merely refuses to use the word "gay" in public, anywhere, anytime.  He has never expressed any support of gay causes.  When he is asked about his sexual orientation, he drops pronouns: "I don't have time to date anyone," "I'm not really looking for a relationship with anyone," and so on.

The major difference is: Liberace was popular in the 1950s, when to come out openly would mean career suicide.  It's now 2015, 46 years after Stonewall.  Does Richard really believe that most of his middle-aged female fans think that he is straight?  And would abandon him en masse if he made a public statement?

The King and I: Bare Chests and Shaved Heads 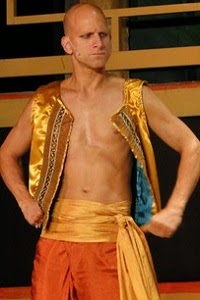 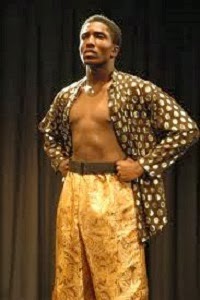 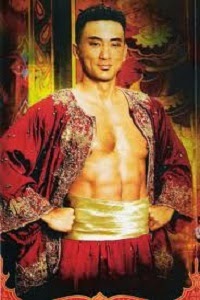 The King and I, the 1951 Rogers & Hammerstein musical, can be played as a heterosexual romance, like the 1956 movie version:

Young widow Anna Leonowens goes to Thailand in 1861 to tutor the many children of King Mongkut.  Their culture clash results in romantic sparks, and they fall in love.

Or, with barely any tweaking at all, it can be played as two strong-willed people developing a non-romantic friendship based on mutual respect.

Which, by the way, was the case in the original novel, Anna and the King of Siam (1944), based on the memoirs of the real Anna Leonowens: she became language secretary to King Mongkut, but didn't fall in love with the man 40 years her elder, and in fact found him unpleasant to work with.  She had quit her job and was on her way back to England when he died. 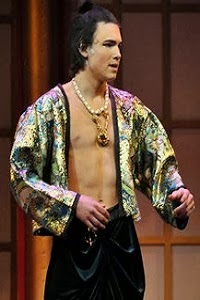 So it's worth checking out the nearest high school drama club, community theater, or summer stock production of The King and I, to see which direction they're taking it.

Also, the King and his son Chulalongkorn are usually portrayed shirtless, so they'll be looking to cast the actors with the most smooth, muscular chests they can find. 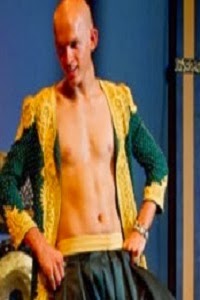 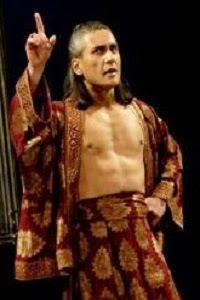 Sometimes the actors go for the full Yul Brynner effect and shave their heads, too.  Sometimes not.
Posted by Boomer No comments: