"Welcome to Wanderland": Beyond Gay-Inclusive 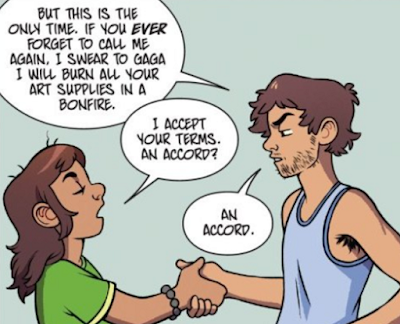 Welcome to Wanderland, a 4-issue limited series by Jackie Ball and Maddie Gonzalez, is set in a Disney-style theme park that has fallen on hard times.  Middle schooler Bel has practically grown up there, and her older brother/guardian Mike works there as a costumed character, the Princess Lark.

Mike is gay; although his romantic interests are referenced only once, he says things like "I swear to Gaga" and spends most of his scenes in drag. 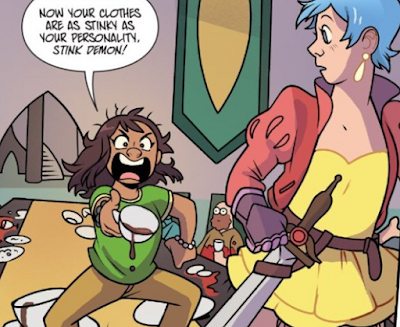 Thanks to a magic door, Bel finds herself in the real Wanderland, a magical sword-and-sorcery world ruled by the tyrannical Sylvia.  The real Princess Lark, who prefers the kick-ass name Riot, is in exile.

Riot and Bel become buds, and use the magic door to travel between their worlds whenever they want. Mike assumes that they are a couple, but Bel explains that she is not interested in anyone in that way.  Presumably asexual.

But Riot is gay.  She has a crush on a female pirate captain, who shows up to help them in the final battle (to restore the rightful king to the throne), and then becomes Riot's girlfriend, kiss and all.

Heterosexual romance is only referenced once in the entire series, when the minor character Keith mentions his "girlfriend."

This is a world I can get behind.

I only have a few quibbles:

1. Apparently Bel has the ability to make magical changes to the theme park. But that plotline is underdeveloped; the few changes she makes are uninteresting.

3. Mike doesn't get a boyfriend.  Granted, he only appears in a few scenes to "big brother" Bel, and then to participate in the climactic final battle.  But an occasional flirtation with a hunk would be nice.

The Last Straight Kids on Earth 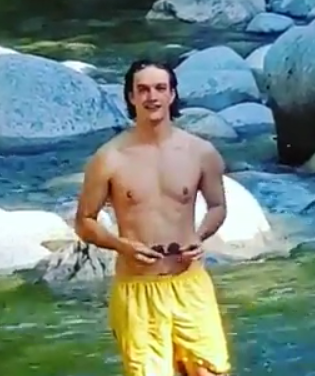 The monsters and zombies can be easily outrun, there is plenty of food and other supplies to scavenge, and he has his technogeek bud Quint (Garland Whit) for company.  There's only one thing missing:

That's right, only 1 1/2 minutes into The Last Kids on Earth (2019), and Jack is summoning The Girl as the meaning of life, the key to his dreaming, the only thing missing in the apocalypse.

Sigh.  Why is it always the Eternal Feminine?

I suppose I shouldn't be surprised, but after watching Twelve Forever and reading Welcome to Wanderland, a series dedicated to finding The Girl seems old fashioned and even offensive. 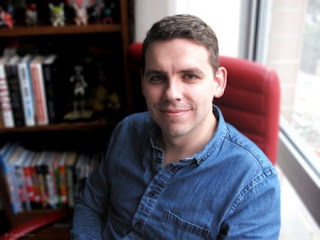 The tv series is based on a series of children's books by Max Brallier, who although cute, doesn't appear to have any sexual or gender diversity in his works.

He does admit that "there are gay kids out there" in response to a homophobic comment on his twitter page.  Just none among The Last Kids on Earth.

To be fair, only Jack expresses heterosexual interest.  The other characters could be gay, just closeted.

The Girl is June (Montse Hernandez), all-around athlete, top student, editor of the school newspaper, practically perfect in every way, whom Joe was crushing on before the world ended.  In the first episode, Joe and Quint discover that she has survived the apocalypse by hiding in the school.

They also hook up with the school bully Dirk (Charles Demers).  The four "last kids on Earth" (and a friendly cat-monster named Rover) move into a decked-out treehouse with a zombie-proof moat and get down to the business of survival. 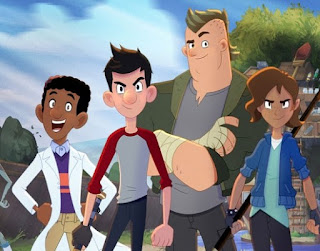 According to Netflix, this is a tv series, but there is only one "episode," 67 minutes long, online.  IMDB lists six episodes, perhaps covering the five books in the series, where the kids learn more about their situation, and eventually have to fight to save the world.  There is some stunt casting, including Bruce Campbell from The Evil Dead series and Mark Hamill.

And maybe they'll find someone gay along the way. 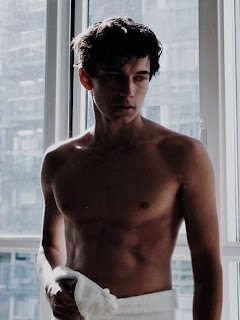 The premise of Riot Girls (2019): most of the population of Potter's Bluff has been killed by a mysterious plague, leaving only teenagers and a scattering of 10-year olds.

So many questions:  How long has it been?  Why are teenagers immune?  Do they succumb when they reach a certain age?  Are there other communities, or are they all alone?  Are they surviving on canned goods, or have they developed agriculture? Why is the electricity still on?

Not to worry, it's not important; the goal is to get the teens alone.  They have divided into two societies, as over-the-top good and evil as Boulder and Las Vegas in The Stand.

The East Side  is a laid-back hippie commune, run by the saintly, "we're all in this together" Jack (Alexandre Bourgeois). He keeps admitting refugees, such as Sony (Ajay Friese, left), but for some unexplained reason, he doesn't like dogs. 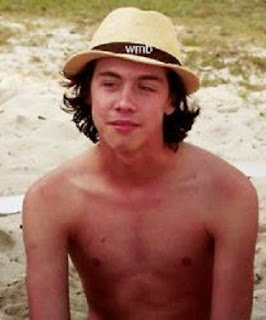 The West Side is a heavily stratified, heavily militarized totalitarian dictatorship, where they kill refugees.  It is ruled by the Wicked Witch of the West.. um, I mean Jeremy  (Munro Chambers), who also kills his own people for such offenses as failing to meet work quotas. 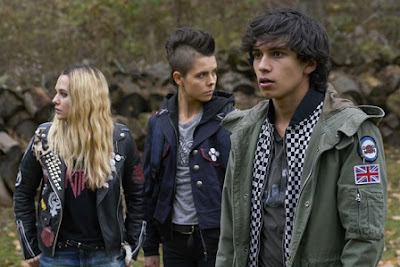 The plot: Jack is captured by Westsiders, who intend to execute him.  His sister Nat (Madison Iseman), the butch Mohawk-haired Scratch (Paloma Kwiatkowski), and Sony rush to the rescue.

It's a surprisingly long way to the West Side; it takes them two days to get there, even with a car.

There's some blood, a lot of rock music, and some heart-to-hearts.  Dr. Evil is killed, and his successor promises "Things are going to be different around here."  The four friends head for home.  The end.

Hetero-horniness:  None.  No one seems particularly interested in sex except for a border guard who tries to rape Nat.  Sony tries to kiss her, but is quickly rebuffed with "I'm not..."

Gay characters:  You're not what, Nat?  The two girls are certainly gay coded, but at one point Nat clarifies: "You're not my boyfriend!", thus establishing her as both heterosexual and unaware that gay people exist.

Bondage: No one has ever heard of rope.  All captives, including Jack, just stand there.

Beefcake: None.  No shirts come off.  There are quite a few cute actors, so I'll try to find shirtless pics from othe productions.  Unfortunately, other than 1. Jeremy, 2. Jack,  and 3. Sony, I have no idea who is who. 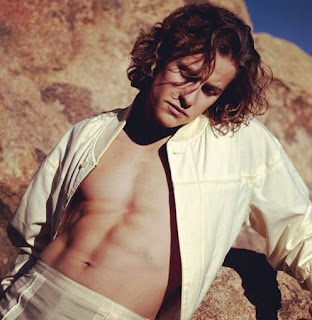 4. Darren Eisnor as Todd, one of the Titans (the sports team that now serves as Jeremy's thugs) 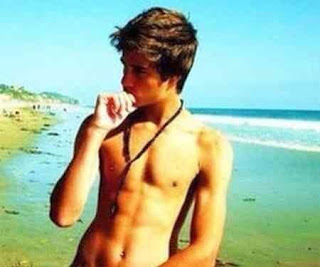 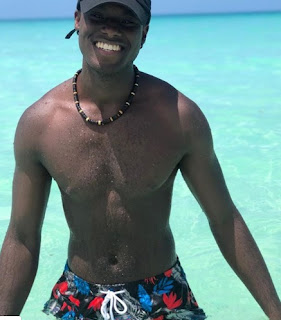 6.  Darnell Bartholomew as a Westside Guard 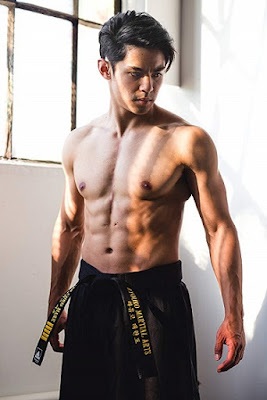 7. Jake Sim (not Sims) as Flick, who I think is second in command.

8. Chris Mark as Sean.  He couldn't have been shot in the locker room? 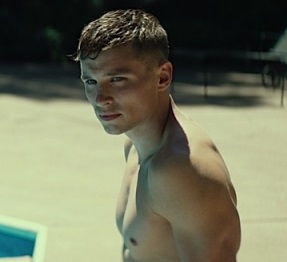 9.Carson MacCormac (left) as Spit.  Come on, one "frolicking in the river" shot for the gay male viewers? 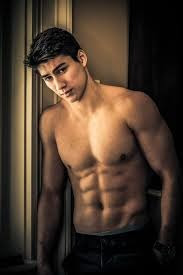 I'll give the movie a B-.  Points for its raucous energy and lack of hetero-horniness.  Demerits for the ludicrous villain and closeting the lesbian couple.

And closeting the physiques.
Posted by Boomer 2 comments: