Yes, But Is He Gay and Available? 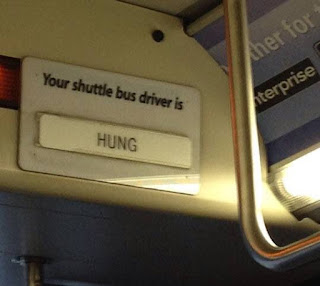 The Homophobic Horrors of Gym Class 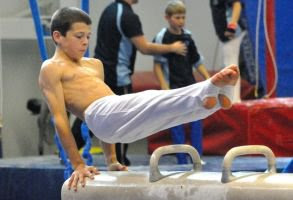 The homophobic horror that is high school gym class began in 1855, when the state of Ohio made the ill-fated decision to require it of all students.  It took off during the 1920s, when "physical culture" was all the rage in Europe, and students were doing gymnastics in the yard.

By the time I entered junior high in 1972, the diabolical structure was in intact. 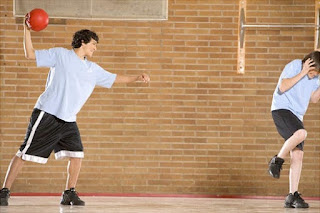 2. The two most gifted athletes in the class would then become team captains, and choose their team members.  "Fairies" were constantly ridiculed and degraded during the process, and left unchosen at the end, while the two team captain argued over who had to take them.  "I'm not taking the fairy -- you take him!"  "No way -- no girls on my team -- you take him!"

Then we played a sport.  No instruction in rules or strategies -- the "teacher' assumed that we already knew the rules.  If we asked, we were yelled at: "Don't be a smart-ass!  You know the rules!"

3. In junior high the sport was usually dodge ball, which involves trying to kill each other with hard round projectiles while yelling homophobic slurs: "Take this, fag!" 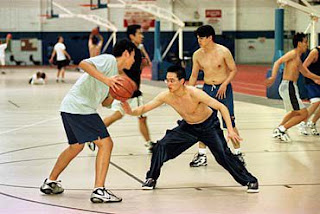 4. In high school the sports were football in the fall, basketball in the winter, softball in the spring.  Same procedure: no instruction, two jocks picking teams and deriding the "fags" and "fairies" while the "teacher" looked on. 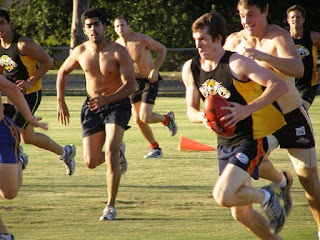 Football was the worst.  "Stand here, facing this big, hulking man-mountain.  You're going to try to stop him from passing this line."

I just stepped aside and let him through. 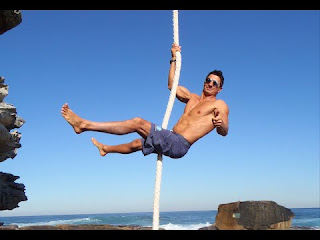 We also got brief instructional tours, single class sessions, of golf, archery, and tennis, barely enough to learn what the equipment looked like.

And rope-climbing.  I never understood that one. 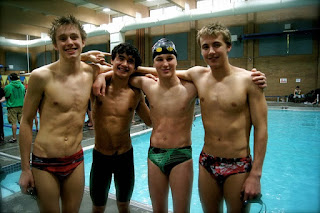 I was very happy during my junior year, when the "teacher" gave up and just gave us free days to do whatever we wanted.  I ran around the track.  No homophobic taunts, no humiliation, and no projectiles hurled at you.

In the 1950s, nude photos of male celebrities were practically non-existent; the few examples we have were taken and developed in private, and didn't get mass exposure for many years.  Even shirtless photos are uncommon.  So it's no wonder that Elvis Presley caused a stampede when he was photographed in his underwear during his induction into the U.S. army in 1958. 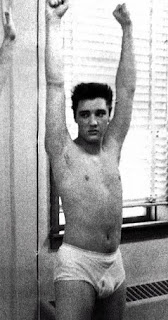 At the time he was the most famous singer in the world, a cultural icon who almost single-handedly drew rock and roll away from its roots in jazz and blues.   He had already had a string of #1 hits, including "Heartbreak Hotel," "Blue Suede Shoes," "Don't Be Cruel," "Hound Dog" -- the list goes on.  Being drafted was a big deal, even without the underwear. 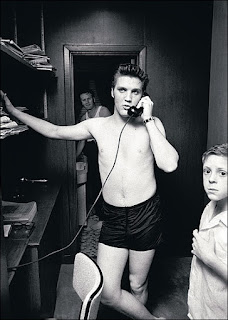 A few other shirtless shots have surfaced over the years.  Elvis didn't have a great physique; in fact, he was a little chunky.  But that didn't make much difference to his armies of fans, in and out of the army. 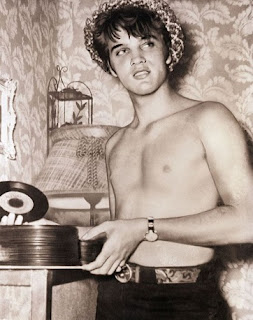 He was apparently quite homophobic in real life -- most men of the 1950s generation were -- but that didn't stop him from forging friendships with many gay men. 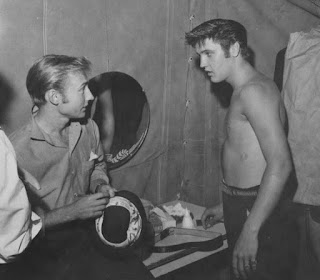 Including actor Nick Adams.  Of course, he may not have known: Adams was not exactly out at the time.
Posted by Boomer 1 comment: 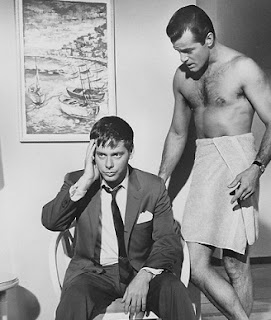 You may not recognize the name Robert Goulet, but he was an icon to the gay generation who survived the pre-Stonewall Dark Ages (1950-1969).

He starred in eight movies, often with gay subtexts: 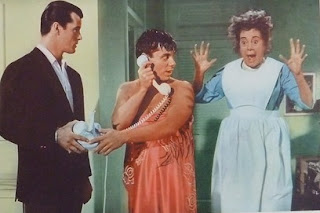 2. Honeymoon Hotel (1964) had an interesting gay connection: he and Robert Morse (the one in the dress) check into the "honeymoon hotel" along with all of the other couples.  Heterosexual hijinks follow, but there are a sizeable number of double-takes at the "honeymoon couple," as well as the rule "you've got to have a girl in your room" to eliminate any rumors.

Here's a semi-nude photo of the boyfriend.

3. I'd Rather Be Rich (1964).  Young heiress Sandra Dee has to decide between her fiance (Andy Williams) and the man she's hired to impersonate him (Robert Goulet).

Goulet appeared on tv nearly 100 times, in specials devoted to his music, in his own series, Blue Light (1966-67), about an American journalist going undercover to spy on the Nazis during World War II, and in many guest roles: a hunky science teacher on The Patty Duke Show, a con artist faith healer on The Big Valley. a murderous doctor on The Name of the Game. 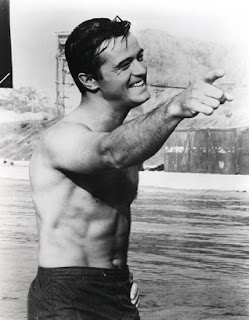 The 1950s was the era of the face, not the physique, but Goulet was not shy about displaying his tight, hard muscles for the camera.

Of course, Goulet continued to perform for thirty years after Stonewall, but he aimed his work at that same body of fans who had loved him in the 1950s, appealing to Boomers only in an occasional spoof, or when a melodious voice was needed: he provided the voice for Wheezy the Penguin in Toy Story 2 (1999), and for sensitive third grader Mikey on the Disney Channel's Recess (1998-2001).

In 2005, two years before his death, Goulet took over the role of Georges, owner of the nightclub and Albin's partner in the Broadway revivial of  La Cage aux Folles.  It was like a final shout-out to the gay fans who had followed him for half a century.
Posted by Boomer 5 comments: 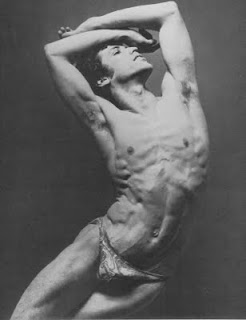 Sorry, accidentally posted to the wrong blog.  I moved it to  "Tales of West Hollywood" 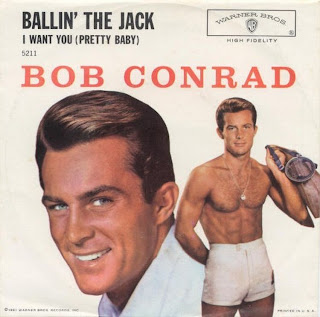 We're used to thinking of Robert Conrad as a two-fisted action hero, but he originally wanted to be a singer.  During the late 1950s and early 1960s, the former professional boxer released a number of teen idol-style crooner records, but the market was overcrowded with Paul Anka, Fabian, Elvis, Frankie Avalon, Pat Boone, and nearly everyone else who could hold a tune.

Bob's records didn't sell, not even with the color shots of his impressive physique. 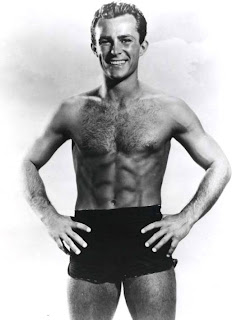 In 1959, Bob landed a role as Tom Lopaka, the half-Hawaiian partner of detective Tracey Steele (Anthony Eisley) on Hawaiian Eye.  Many of the cases took place on the beach, allowing Bob to strip down to a swimsuit or short-cut jeans.  The buddy-bonding was intense, and there weren't a huge number of episodes in which Tom meets a girl.


When Hawaiian Eye ended in 1963, Bob's singing career was forgotten; after starring against type in the beach movie Palm Springs Weekend (1963), he moved almost into the program that Boomers remember fondly: Wild Wild West (1965-69), a combination of the classic Western with the 1960s spy craze (other examples include Get Smart, The Secret of Boyne Castle, I Spy, and Mission: Impossible. 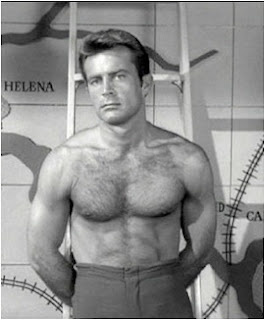 West is tied up shirtless in nearly every episode.  He usually frees himself, but sometimes Gordeon storms to the rescue.

Unfortunately, there wasn't much buddy-bonding. West and Gordon were coworkers, not buddies, and they both leered at women nearly as often as they fell in love. 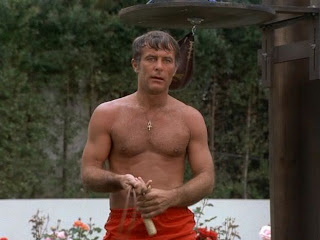 When tongue-in-cheek adventure went out of style during the early 1980s, Bob switched to comedy (Wrong is Right, Moving Violations) or drama (Assassin, Charley Hannah).  But he rarely forgot to include a shirtless scene or two.

He parodied himself in a series of commercials for Ever-Ready Batteries in the 1980s, daring the viewer to knock a battery off his shoulder (traditionally one starts fights by daring someone to knock a chip off one's shoulder).

The rumor mill suggested that he was bisexual, and during the 1950s had liaisons with some of the great closeted actors in Hollywood, such as Tab Hunter, Wally Cox, and Rock Hudson.  Bob denied the rumors, stating to the press "I'm not gay" several times.
Posted by Boomer 13 comments:

Land of the Lost 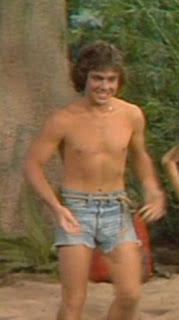 Saturday morning tv in the 1960s and 1970s was full of teenage boys trapped far from home.   From 1974 to 1977, that boy was a hot teenager named Will (Wesley Eure), who was on a "routine expedition" with his hot dad Rick (Spencer Milligan) and kid sister Holly (Kathy Coleman), when they zapped through a time-space portal into a jungle world crowded with dinosaurs, reptilian aliens named Sleestaks, and cute gibbering primates named Pakuni.  After a couple of seasons, Rick vanished, replaced by hot Uncle Jack (Ron Harper).

There wasn't much bonding, since the only available males were close relatives.  Nor much beefcake; you'd think after three years in the humid jungle, the guys would start wearing Tarzan-style loincloths, but no, only one episode featured Will shirtless, in painted-on jeans. 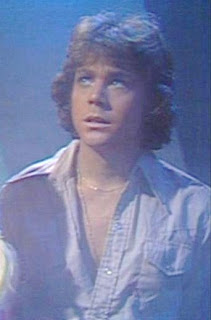 Otherwise gay boys had to make do with shirts unbuttoned to his navel.

But at least there was an utter lack of mentioned or displayed heterosexual interest in any of the characters, ever. 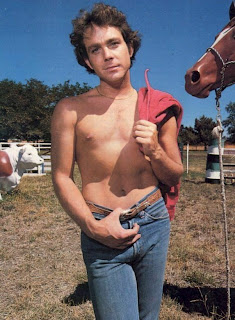 And Wesley Eure made up for his lack of shirtless shots later, as Mike Horton on Days of Our Lives.

In 2009, he finally made one of the obligatory "coming out" statements, informing the world that he was gay via afterelton.com,  but he was never really in.  While on Land of the Lost, he was dating Richard Chamberlain.

All the Four Color Beefcake Ever Printed 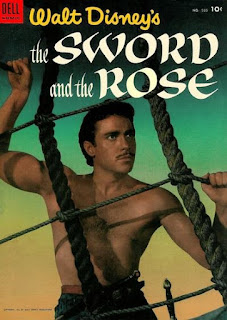 The Four-Color series was the mainstay of Dell Comics, begun in 1939 and lasting through 1962, with over 1300 issues, often two or three per month.  There were no ongoing characters: each book was standalone.

Artists mined the stables of Walt Disney and Warner Brothers for comic inspiration:
"Porky Pig and the Grand Canyon Giant"
"Donald Duck and the Pixilated Parrot" 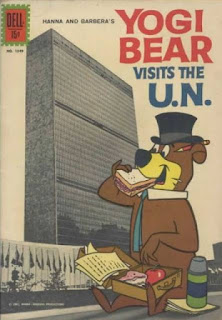 Some of the tv adaptions were head-scratchers, not at all popular with kids:
"77 Sunset Strip," about swinging bachelor detectives.
"I Love Lucy"
"The Life of Riley"

They adapted movies, some from years before:
"Francis the Talking Mule"
"Jungle Jim"
"Rio Bravo"

And comic strips, some from a generation before:
"Krazy Kat"

Some that I have never heard of:
"Will-Yum"

One would expect a lot of beefcake, but in fact out of 1300 issues, I found 7 covers featuring beefcake photos: 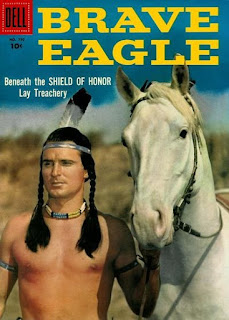 1. The Sword and the Rose (top photo), a 1953 Medieval knighthood movie starring Richard Todd with an Errol Flynn moustache. 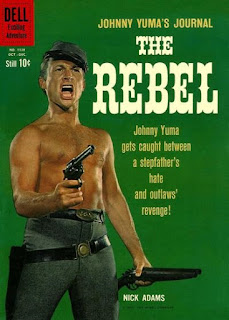 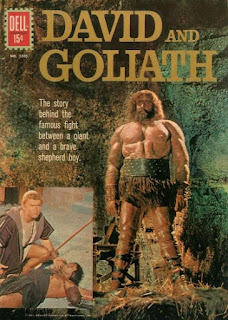 6. David and Goliath, based on the 1960 Italian movie with Croatian actor Ivica Pajer as the shepherd boy. 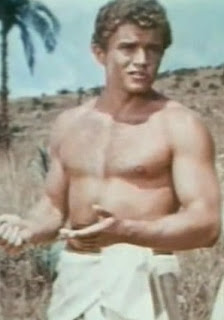 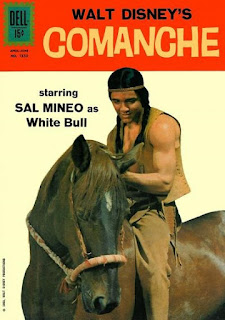 7. Sal Mineo as an Indian boy in Comanche.  The film was actually released as Tonka (1959).

At least two of the seven covers featured gay men, and a third had a gay subtext.  Not a bad record.