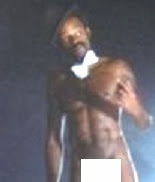 In 1971, Melvin Van Peebles had had enough of the Man, and set out to bring the Black Community together with a movie about a hero who triumphs over white oppression.  He had no money, so he shot a lot of scenes with a hand-held camera, used leftover footage from other projects, and did a lot of trippy montages and visual gymnastics.

I expected an angry Black Power movie, with lots of violence and heterosexual sex.  But I was not expecting so much gay content.  Here are the 10 Gay Surprises of Sweet Sweetback's Baadassss Song:

1. In the first scene, a group of prostitutes gaze lustfully at a young boy (Melvin's son, Mario Van Peebles).  One takes him to her room, strips him, and initiates sex.  We see a glimpse of his penis and a lot of his bare butt as he thrusts, thrusts, thrusts. (Don't worry, this photo shows neither.)

2. The boy grows up to be Sweetback, after a slang term for a gigantic penis, and we see it, gigantic and aroused, on camera, as Melvin Van Peebles prepares for sex with a woman.  We see it again several times, and quite a lot of his bare butt as he thrusts, thrusts, thrusts in unsimulated sex scenes.

3. Sweetback works as a performance artist in a gender-bending sex show: a woman is seduced by an elderly man who becomes a woman, and then becomes the naked, aroused Sweetback, all thanks to the efforts of a drag queen Fairy Godmother. 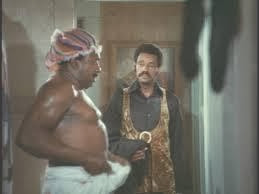 4. Two white police officers appear, wanting to arrest a black man, so Sweetback volunteers.  On the way back to the station, they break up a Black Power rally and arrest the teenage Mu-Mu (Hubert Scales).  They beat him severely, and Sweetback rushes to the rescue, injuring the cops. Gay-subtext rescue!

5. Now the cops want him dead.  Sweetback hopes to take refuge in the home of Beetle (Simon Chuckster), the owner of the brothel, an extremely feminine, gay-coded man, naked except for a towel and a shower cap.  Beetle sympathizes with Sweetback, but he can't stay there; it's too risky.  Later, still shirtless, Beetle is beaten, deafened, and killed by the police.

6. Sweetback tries to take refuge in a church, but the pastor tells him that Mu-Mu has been captured again, so he rushes out.  More gay-coded emotional intensity.  The "damsel in distress" is a guy. 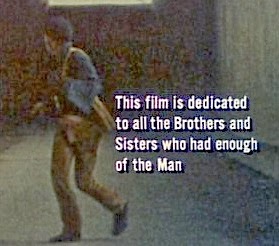 7. Sweetback rescues Mu-Mu, and they seek refuge in a deserted house.  Presumably they're about to have sex when the police break in.

8. Mu-Mu is injured in the ensuing fight.  A black biker (John Amos) offers to take Sweetback to Mexico and escape, but instead he insists that Mu-Mu be taken into town for medical care.  Sacrificing his safety for Mu-Mu.

9. By now Sweetback is a folk hero, so as he runs toward Mexico, dozens of random people, presumably being interrogated by the police, claim that "I ain't seen Sweetback." 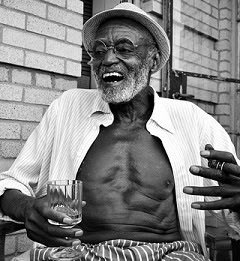 Including three lisping, mincing gay stereotypes. Who nevertheless participate in the struggle, try to discomfort the police officers by flirting with them, and key into the Gay Liberation movement by identifying themselves as  "militant queens."

9. One doesn't expect Melvin Van Peebles (who still has a physique) to be gay-friendly.  After all, in the shooting script, the three militant queens are identified as "fags."  Yet he has appeared in several gay-positive movies, such as Love Kills (1999).

10. His son Mario is rumored to be gay, and played a gay character in Multiple Sarcasms (2010).

Why You Should Pay Attention to Crew Crews 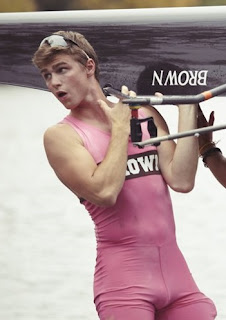 While searching for small-town beefcake, I've been concentrating on swim and wrestling teams, and ignoring crew, because the athletes don't typically take their shirts off.

I'll have to rethink that strategy.

Crew is another word for rowing, a sport requiring teams of 4 or 8 to propel a small boat (called a shell) across for 2 or 5 k races.  It requires tremendous endurance, stamina, and upper-body strength, so crew crews tend to be extremely muscular.

And I've noticed something else about them. 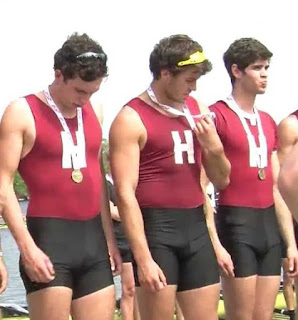 The equipment is frightfully expensive, so crew is associated with exclusive private schools and Ivy League Colleges, although there are teams at Texas A&M, Oklahoma State University, and SUNY Oswego.

This crew is from Harvard. 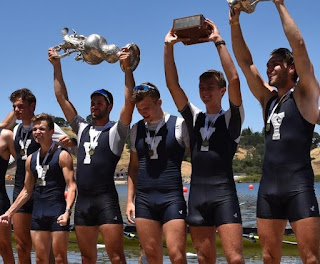 This one is from Yale.  Rowing apparently requires that everything be snugly placed, with part of your equipment on one side and part on the other. 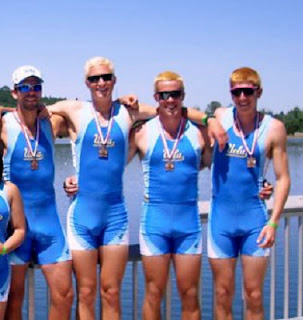 Very snugly placed, as this team from UCLA demonstrates. 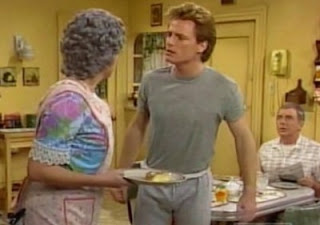 It was set in the fictional city of Raytown, somewhere in the South, where everything is named "Ray": Chez Ray, the Raymada Inn, Raymart, the Rayhound Bus Line.

The real Raytown is a suburb of Kansas City, a long rectangle surrounded on all sides by more suburbs.  There's no there there: even city hall is on 59th Street.  The most impressive building seems to be the high school.

I wondered if the real Raytown offered any beefcake that could come close to the glory of Allan Kayser. 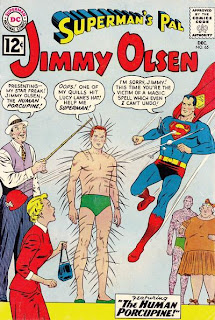 Many gay boys growing up in the 1950s and 1960s dreamed of dating Superman.   In 1954, Daily Planet reporter Jimmy Olsen got his chance: he began to appear in his own comic book title, as Superman's "boy pal."

What, precisely, was a boy pal?  A boy sidekick, like Kaliman's Solin?  An adopted son, like Batman's Robin?  Jimmy wasn't a boy or even a teenager: he was tall and sturdy, with the standard comic book body-by-Michelangelo (since reporter outfits are not particularly revealing, almost every story required him to be in underwear, in a swimsuit, or ripped out of his clothes). 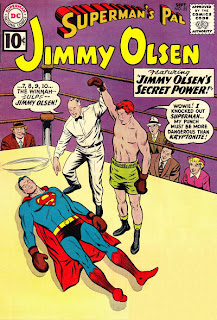 1. It was physical.  Superman and Jimmy flew with their arms wrapped tenderly around each other, a position that no one else, not even Lois Lane, rated.

2. It was romantic.  Superman gave no one but Jimmy a gift of jewelry (a special signal watch). 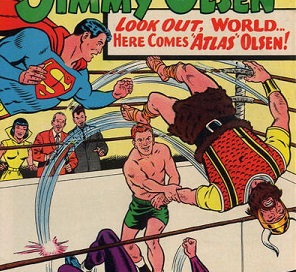 3. It was of public interest: “There goes Superman’s boy pal!” passersby would whisper, and when the duo quarrels in “Superman’s Enemy” (Jimmy Olsen 35, March 1959), every stage of their breakup and reconciliation made Daily Planet headlines.

4.  It was exclusive: each had other friends and even other sidekicks, but in “Superman’s Super Rival” (Jimmy Olsen 37, June 1959), when Jimmy seems to be courting a newly-arrived superhero named Mysterio, Superman is so jealous that he challenges the rival “pal” to a fight.

5.  It threatened heterosexual romance: in a fantasy story, “Jimmy Olsen’s Wedding,” (Jimmy Olsen 38, July 1959), Jimmy’s girlfriend agrees to marry him only under the condition that he never see or contact Superman again (one can’t imagine why). He complies for several years, but eventually he cannot bear to be separated any longer, and arranges a secret rendezvous with his “pal.” His wife discovers him in the act (of what?), shrieks in anger. and leaves him. 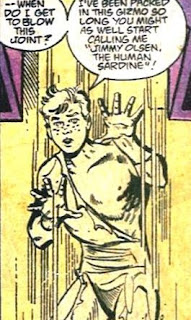 Such an overt same-sex romance made me scrounge to beg or borrow all of older Jimmy Olson comics I could.  The issues I could buy in the store (the series lasted until 1974) were no good; about 1965, Jimmy and Superman broke up.  Though they stayed on friendly terms, no further stories featured their romance.

And the special signal watch was never seen again. Perhaps Jimmy returned it the day he told Superman over coffee, “it’s not you, it’s me.”

In 1972, Jimmy found a new boyfriend, an African-American cop named Corrigan, whom he sometimes even called his “pal.”

Unfortunately, the homoromance was not maintained in tv versions of the Superhero.  Smallville gave Superman two boyfriends, but neither were Jimmy Olsen. 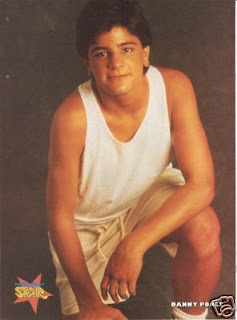 Danny Ponce was arguably the heartthrob of The Hogan Family (1986-1991), surpassing Jason Bateman in the number of first gay crushes he elicited, and in the number of teen magazine shots featuring glimpses of his increasingly muscular physique.

But he was a busy child star before Hogan, with roles on Happy Days, Family Ties, Hunter, and Hotel, as well as a 3-year stint as Jason Avery on Knots Landing (1983-86). 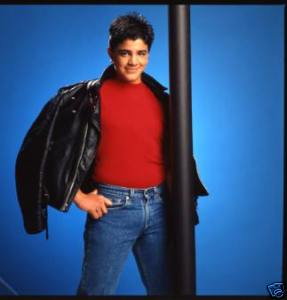 Since Hogan, he's remained close friends with his tv brother Jeremy Licht.  They were best men at each other's weddings.

He now goes by Dan Ponce, although that means that the Internet Movie Database mistakes him for the Dan Ponce who founded the "Straight, No Chaser" a capella group and now works for WGN in Chicago (no relation). 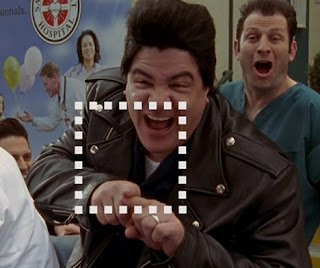 Although Dan isn't a superstar anymore, he's had some substantial movie roles.  Man of the Year (2002)  was particularly memorable, the story of a "Man of the Year" celebration for business ex Bill (John Ritter) with the dialogue entirely improv.

And he occasionally returns to his comedy roots on tv:

On the "My Urologist" episode of Scrubs as a member of the Greasers musical group who points out that Elliott is "square." 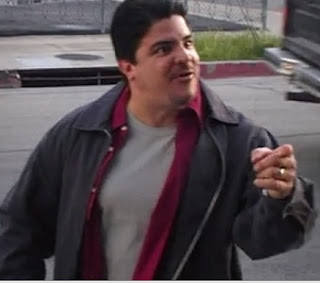 On the "Hundred Dollar Baby" episode of It's Always Sunny in Philadelphia, as a guy who gets beat up by Charlie and Dee. 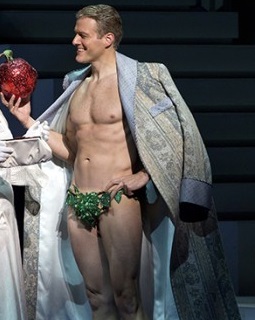 You go to see Tarzan primarily to see a buffed guy in a loincloth. There may be other reasons to go to Streetcar Named Desire or Cat on a Hot Tin Roof, but a half-naked Stanley or Brick is certainly among the top ten. But even serious dramas and quirky small-stage comedies can surprise you with beefcake. 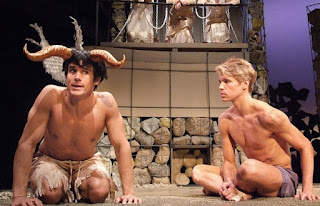 Heavier Than displays Nick Ballard as Minotaur of ancient Greek myth turning 30 and leaving his twink years behind him, and Casey Kringlen as a skinny Icarus who has a crush on him. 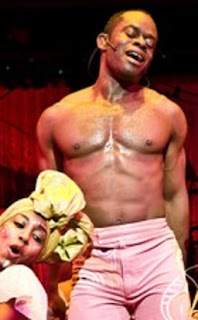 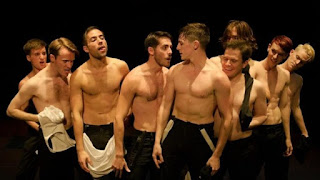 Fun fact: For most of my life, I thought that the novel and movie referred to an orange clock.  I didn't realize that clockwork means mechanical, so "a mechanical orange."

Neither title makes any sense.  The play is about a gang of hooligans in a dystopian future. 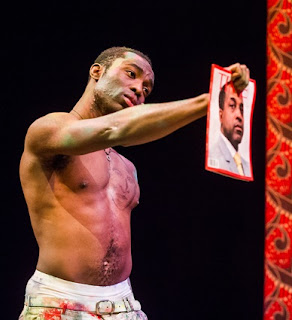 I'll bet you didn't know that Hamlet  had a physique like that.  In this modern rendition starring Paapa Essiedu , he does. 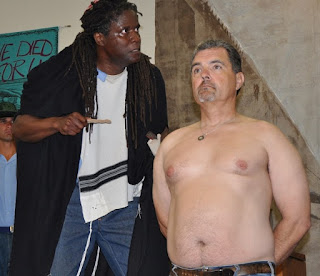 Or that Shylock in Merchant of Venice was a beefy bear.


More after the break.