In an era where nonwhite actors were typically portrayed as sexless sidekicks and villians, Inuit actor Mala, aka Ray Mala (1906-1952) found himself a sex symbol.

Which is a problem.

It's easy to find gay subtexts in the work of Sabu the Elephant Boy, the Indian actor spent the 1930s and 1940s playing androgynous teens in love with white male leads; or Keye Luke, the Chinese actor who spent World War II walking onto the set, waiting for the gasps of horror to subside, and explaining that he was Chinese, not Japanese; or even in Yul Brynner, who played a variety of "ethnic," that is, "asexual" types.

But Mala was somewhat different. 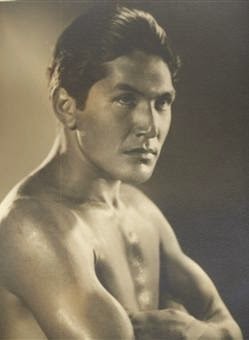 After working as a cinematographer in his native Alaska (then still a territory), and appearing in the ethnographic film Igloo, he came to Hollywood in 1925 and got a job as a cameraman.  In 1933 he starred in Eskimo, aka Mala the Magnificent, about an Eskimo and his wife who run afoul of treacherous Americans. 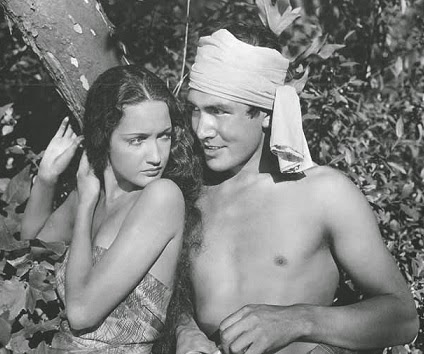 The film was a box office success and propelled Mala to stardom.  He went to the South Pacific for Last of the Pagans (1935), about a man and his wife fighting off evil Europeans and a volcano. 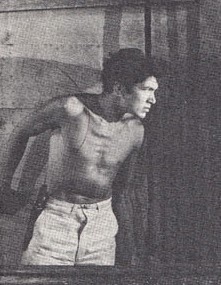 Robinson Crusoe of Clipper Isle (1936) was a movie serial starring Mala as an American secret agent investigating foul play in the South Pacific, and incidentally falling in love with a woman.

In Hawk of the Wilderness (1938) Mala finally got a gay-subtext vehicle. Herman Brix as a Tarzan clone raised on a tropical island in the Artic (don't ask). Mala plays his sidekick, who unfortunately dies at the end, so there's no "walking arm in arm into the sunset" scene. 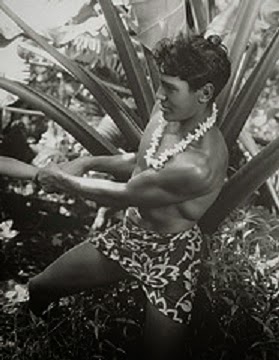 Mala continued to act during the 1940s, playing a variety of servants and sidekicks, but none that I am aware of have the intensity, passion, or exclusivity of homoromance.  He also worked as a cinematographer.

According to wikipedia, his grandson, Ted Mala Jr., is also an actor.

Alcestis: A God and his Boyfriend in Ancient Greece 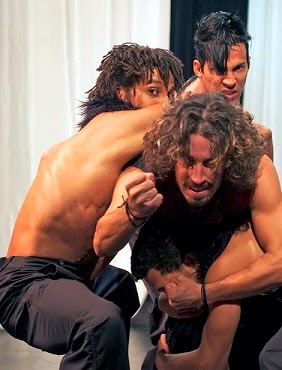 During my freshman year at Augustana, I took a course in Greek Literature.  We had to read The Iliad, The Homeric Hymns, and plays by Aeschylus, Aristophanes, Sophocles, and Euripides.

Of course, the professor tried his best to eliminate all traces of same-sex desire, presenting the ancient Greeks as rampaging heterosexuals.

He wasn't successful with Alcestis (438 BCE) by Euripides.

The plot synopsis makes it seem entirely heterosexist: Apollo offers to let King Admentus live past his allotted life span, if he can find someone to die in his place.  His devoted wife Alcestis offers to go.

But what actually happens is: Apollo offers Admentus immortality because he likes him. A lot. 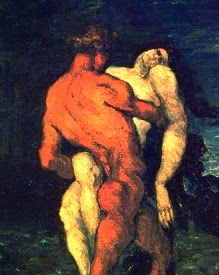 In Greek mythology, Apollo lives with Admentus for several year before this story takes place. The lyric poet Callimachus says that they were lovers.  Thanatos (Death) even taunts Apollo about wasting his time on short-lived mortals.

Admentus has a human admirer in Hercules, who arrives without realizing that Alcestis is about to die.  Admentus is supposed to be in mourning, but he's so happy to see his friend that they spend the night carousing.

In the morning, apprised of the situation, Hercules rushes off and wrestles with Thanatos in order to bring Alcestis back to life (this is a rather a buffed Alcestis).

So it's not about hetero-romance spanning life and death after all.  It's about a man turning over Heaven and Hell to help his friend. 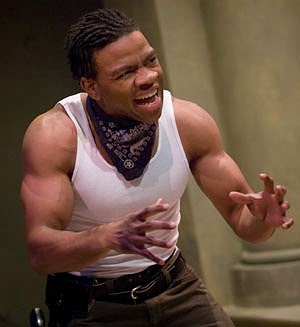 I never thought that Greek dramas could be staged well.  They're too alien to modern sentiments. But Alcestis has been staged several times recently, usually with Ted Hughes' 1999 translation that avoids the homoerotic subtext -- text, actually -- to concentrate on the romance between devoted husband and wife.

Here the Ted Hughes version is performed at Bates College in 2009. 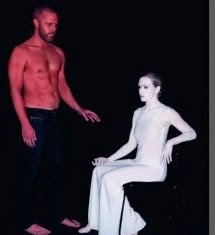 In 2013, a Cuban-American troupe performed Alcestis Ascending in New York, with script by University of Alabama professor Seth Panitch. It's in Spanish and English.

The Victorian Lusts of "Angels and Insects" 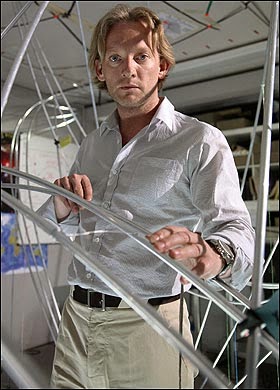 Do you want to see Douglas Henshall, the hunk of the British sci-fi series Primeval, nude and fully aroused?

Are you sure?  The scene is in a rather disturbing movie. 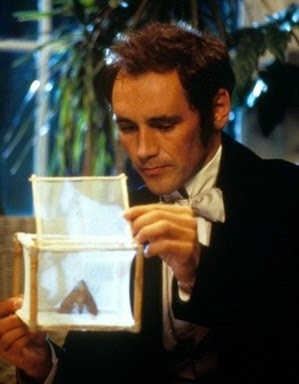 William Adamson (Mark Rylance) has been studying insects in the Amazon.  He returns to stuffy, repressed, Victorian England, and has trouble re-adjusting.  The wealthy Sir Harald Alabaster (Jeremy Kemp) invites him to come live on his estate, catalog his insect collection, and teach his children about the wonders of nature. 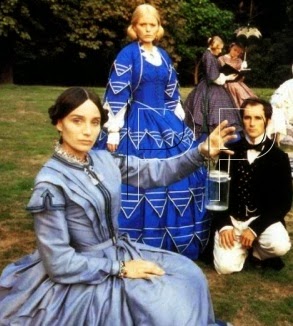 The estate is full of dark, brooding people who dress like insects.  Like all Victorians, they have lots of secrets and repressed sexual desires.  But not the interesting desires that lead to gay romance.  Something else altogether.

Adamson becomes infatuated with the "stunning" Eugenia, who just lost her husband to suicide.  She returns the interest, and they have energetic sex, and finally marry.

By the way, the sex involves Eugenia completely nude, frontal and all, but only Adamson's torso, although you can see that he is aroused, standing at attention beneath the bedclothes.

That part is impressive, but otherwise Mark Rylance is scrawny, with no muscles at all.  He was only 35 years old in 1995, but he seems much older. 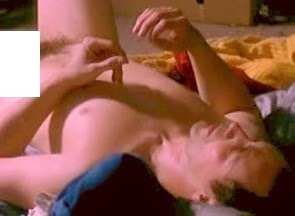 They have five children, whom Adamson doesn't care for.

Eventually he discovers the reason: they aren't his (see, you can only have an emotional bond with children who are your biological progeny.  Bad luck for gay adoption!). 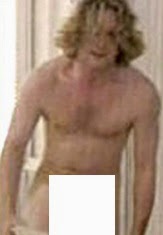 Eugenia has been having a long-term affair with her older brother Edgar (Douglas Henshall).

Everyone else on the estate knows, and has been trying to inform Adamson in cleverly veiled ways.  But he only discovers by breaking into the bedroom while they're having sex (Henshall was fully aroused by accident, but director Philip Haas decided to keep the scene instead of reshooting).

Adamson decides that he has had enough of human society.  He leaves his wife and kids and returns to the Amazon, accompanied by the governess Matty, who was in love with him all along.

Need a shower yet?

The movie, by the way, is Angels and Insects (1995).  The original story was written by A.S. Byatt, who also wrote the homophobic Possession (1990), about closeted lesbians in Victorian England. No homophobia here, just the vagaries of heterosexual lust.
Posted by Boomer No comments: 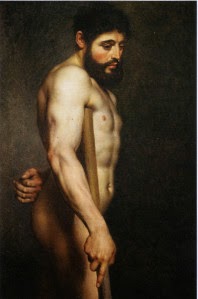 Christoffer Wilhelm Eckersberg (1783-1853) grew up in southern Denmark, and at the age of 19 enrolled at the Royal Academy of Art.  He was schooled in the neoclassical tradition, but soon expressed an interest in more realistic-looking figures, like this beefy nude man.

In 1810 he was pushed into marriage, but a few days after his wedding, he left the country.  (His wife finally got a divorce.) 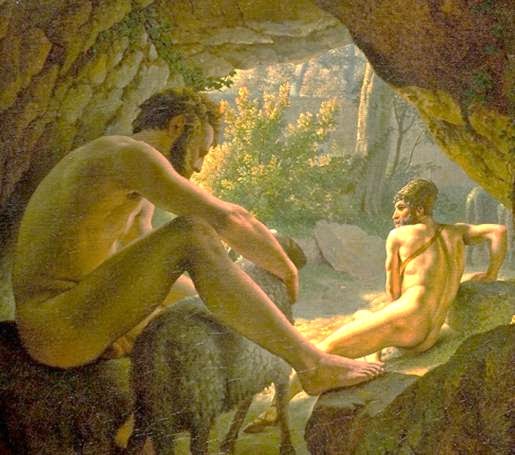 Although he painted portraits, landscapes, historical scenes, and female nudes, his brightly-lit, naturalistic male nude figures brought him the most attention.

Here he revisits the scene from The Odyssey where Ulysses escapes from the cyclops Polyphemus, transforming it into a scene of two nude lovers in Romantic-era cave. 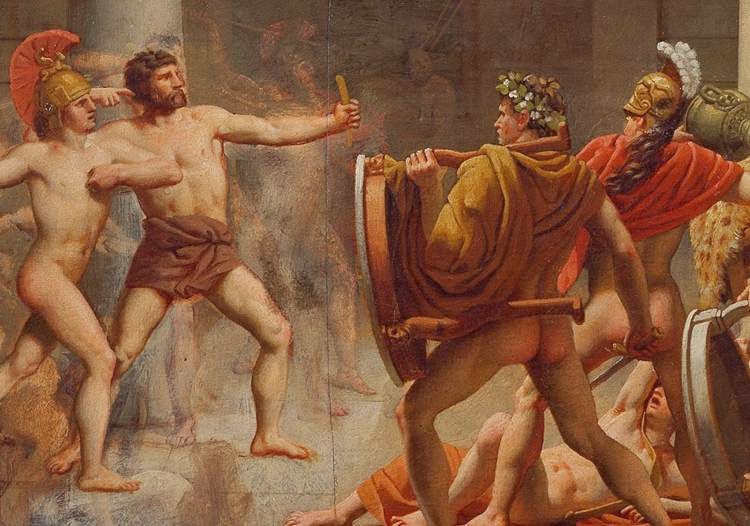 In another scene from The Odyssey, Ulysses returns after many years to find his wife fighting off suitors. Eckersberg made them all naked from the waiste down, and gave Ulysses a nude boyfriend, maybe Telemachus. 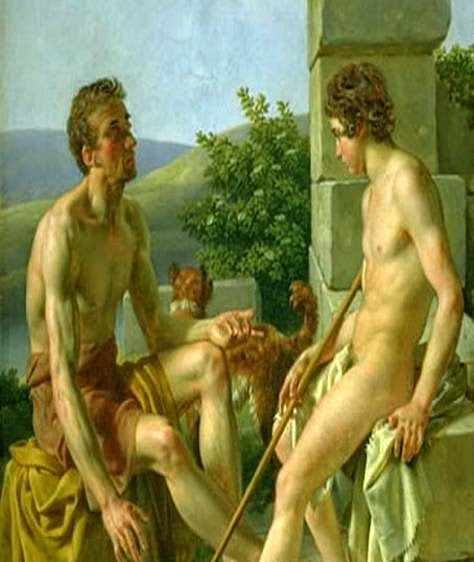 In 1817 Eckersberg returned to Denmark and became a member of the Academy of Art, later a professor, and then the curator.  He was commissioned to do a number of paintings for Christiansborg Palace, as well as landscapes, marine paintings, and altarpieces.

But he returned over and over to his romanticized studies of male nudes.  This one, called merely "Young Man," shows a naked young man talking to a muscular older man, his mentor, father, or boyfriend. 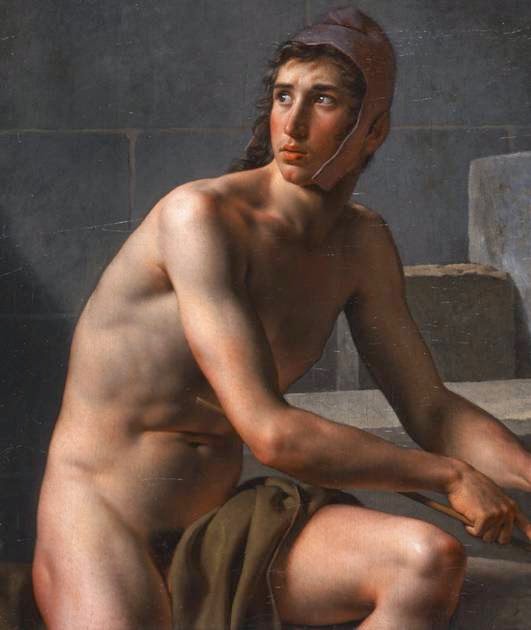 He often found inspiration at the Copenhagen Naval Station, where the sailors practiced swimming nude. 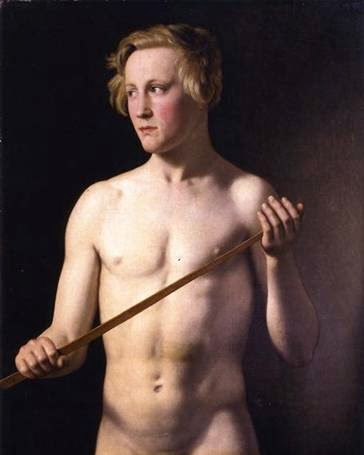 Eckersberg was married twice more, and fathered 10 children.  No one can deny his heterosexual interests.  But no one can deny that the Father of Danish painting found inspiration in the male form.

When he was 54 years old, he painted Carl Frørup, Standing Male Model (1837).  It was unusual for artists to include the names of their models in their titles.  I wonder if Carl Frørup was something more. 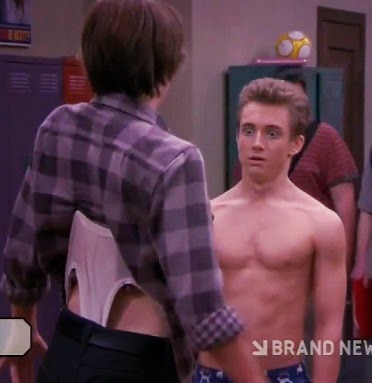 Many teencoms involve kids doing adult things, such as running a fashion company (True Jackson, VP) or a toy company (Some Assembly Required).   Mr. Young (2011-2013), a Canadian series which sometimes appeared on Disney XD, has a kid becoming a high school teacher.

Adam Young (Brendan Meyer) is a boy genius who graduated from high school at age 9, completed college (and presumably graduate school) by age 15, and instead of taking a tenure-track position at a research university, became a science teacher at Finnegan High.  Go figure. 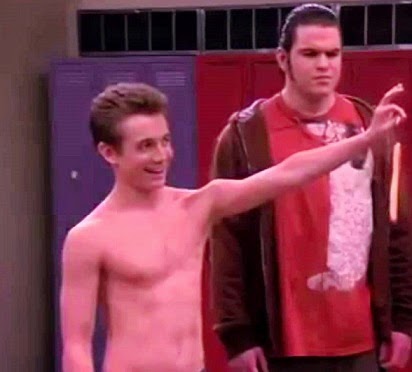 He's also an inventor, so there are some fantasy elements as he accidentally pumps a truth-serum gas into the school, or switches bodies with his students, or travels back in time.

His students include:
1. His goofy but surprisingly buffed childhood chum Derby (Gig Morton).
2. His crush Echo (Matreya Fedor).  Isn't there a rule about teacher-student romances?
3. The bully Slab (Kurt Ostlund), who becomes an ally.
4. His older sister Ivy 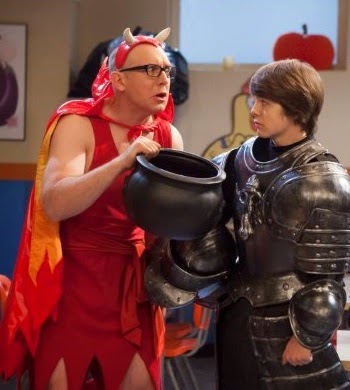 After three seasons, everyone graduates and goes on to Great Northern University, where Adam, coincidentally, has taken a professorship.  Were they expecting a spin-off? 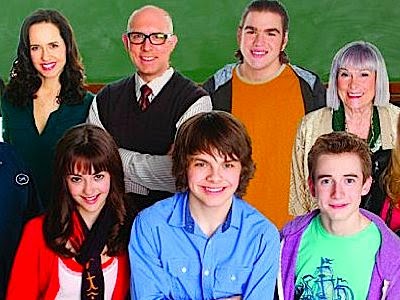 The program was created by Dan Signer, who also inflicted A.N.T. Farm on us, so you know what it's about: sex.  Specifically heterosexual sex.  Adam and Derby wander around in tongue-lolling hetero-horny hysteria, and the plots are often about them trying to get with this or that girl.

Slab, however, expresses heterosexual interest only once, and he has some gender atypical-traits, like an interest in ballet and the ability to cry.

And there's a gay subtext bromance between Adam and Derby that often becomes physical.

No doubt unintentional.  But authorial intent is never necessary for a gay subtext.

It's not out on DVD, but episodes are available on youtube.

See also: The Suite Life of Zack and Cody  and A.N.T. Farm.