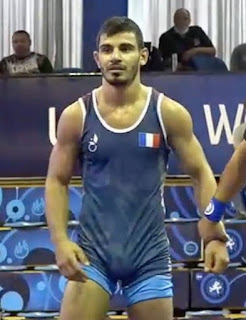 The high school and college wrestling we know, with adolescents in very revealing singlets trying to pin each other, is purely American, not practiced anywhere else except in a few Canadian schools.

In Europe, it's all Graeco-Roman wrestling. lutte in France, Ringen in Germany, borroka in Basque.  And practiced primarily by adults, not as a school sport. 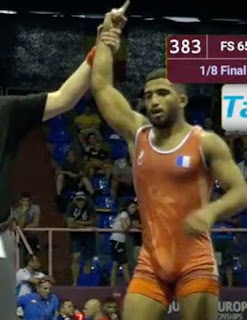 I never did see the point in displaying the biceps and bulges of teenagers to an audience of strangers.  It makes more sense to wait until they're adults, and are more able to handle the knowledge that they are objects of admiration. 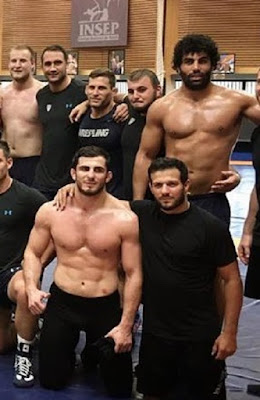 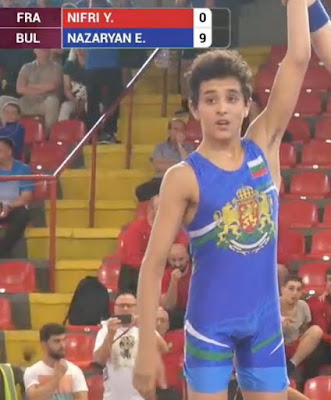 Teenagers do participate in Lutte on occasion, but it's not a usual thing, and they don't seem to be very good at it.  Here Nazaryan from Bulgaria beat Nifri from France 9 to 0. 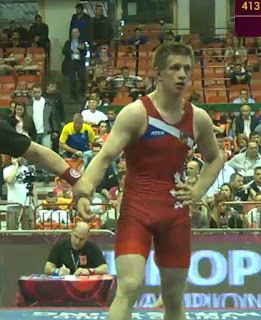 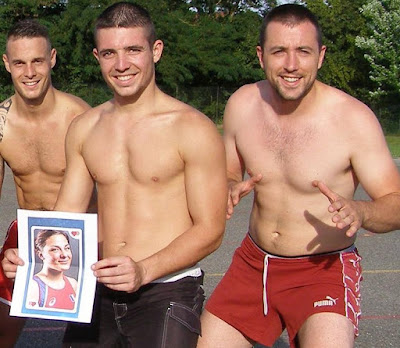 Of course, grown-ups don't display their beneath-the-belt parts quite as much, or as aggressively, as the high schoolers, but that's not necessary a bad thing.  No embarrassing "Should I pretend not to notice?" moments.

Besides, they are open for dating.  Or at least a romantic fantasy about dating them. 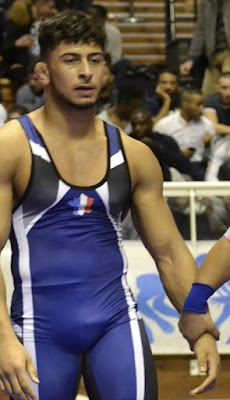 Grownups are less likely to be proficient in English, so if you are going to cruise, a familiarity with French helps.  Or Greek. 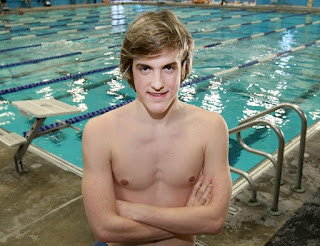 I try to avoid everywhere in Texas, but I especially try to avoid Waco, the small town in the no man's land between Dallas and Austin.  Most people had never heard of it until the 1993 siege of the compound of the Branch Davidians cult, but I heard of it back in 1982, during my horrible year in Hell-fer-Sartain.  Some of the guys I met hinted that there was an even worse place in Texas.

But they insisted, a small redneck nightmare called Wacko, overbrimming with kooks, rednecks, Bible-thumpers, and homophobes.  Hell on Earth.  Everything about it was a lie.

Recently a story about "Ex-Gay" billboard springing up all over town, plus the story of the pastor of a homophobic church being caught in a prostitution sting, made me wonder just how awful Waco is. So I did some research, and discovered that my Hell-fer-Sartain friends were right: everything about it is a lie. 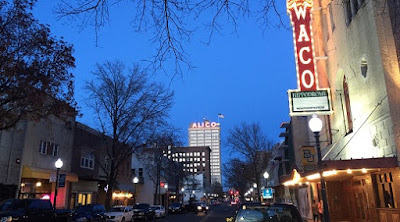 1. It's pronounced Way-Co, not Wacko, named after the Wichita tribe (called Hueco in Spanish).

2. Way-Co is not a small town.  The population is over 250,000.  It has one of the highest crime rates in the U.S., a high poverty rate, congestion, urban sprawl, all of the problems of big cities with none of the openness to diversity.

3. The Branch Davidians did not disband after the 1993 siege.  There are several split-off groups still going.

4. There's a Twin Peaks Restaurant, with no connection to the Twin Peaks in the Castro.  It's a straight biker bar. where a 2015 turf war resulted in 9 deaths.

5. There's a Beverly Hills, with no connection to the Beverly Hills in California: a long, thin, depressed area along Waco Creek. 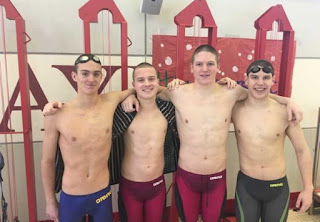 6. Baylor University is a "top Christian University."  "Christian" here means "homophobic," not "following the teachings of Jesus."  It's the alma mater of Jacob Walter Anderson, the frat president who received a $400 fine as punishment for rape. 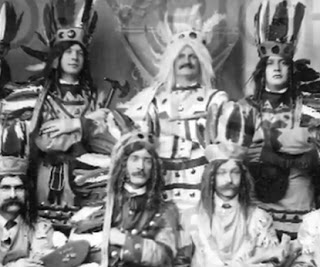 7. The Dr. Pepper Museum does have exhibits about the soft drink, but it's mostly a Free Enterprise Institute, devoted to promoting capitalism.

8. The Red Men Museum is not the original inhabitants of the area.  It's devoted to the Improved Order of the Red Men, a fraternal organization that admitted only white people until 1974.  I doubt there are many Native American members. 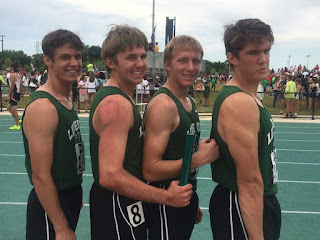 9. Live Oaks Classical School is actually a Christian school: "For the Glory of God: A Distinctive Christ-Centered Education."  They teach rhetoric, logic, and so on, but no Latin or Greek. 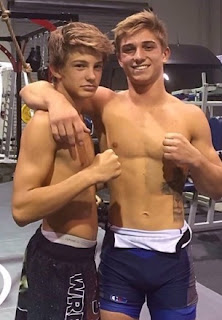 10. University High School does not prepare you for university.  You can learn automotive technology, hospitality and tourism, and criminal justice, and other things

Oh, well, at least there's some beefcake down there in the Heart of Texas. 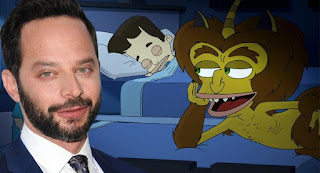 Big Mouth is an adult animated sitcom a 7th grader named Nick Birch (co-creator Nick Kroll), who is going through puberty with the help or hindrance of Maurice the Hormone Monster and, in the second season, the Shame Wizard. 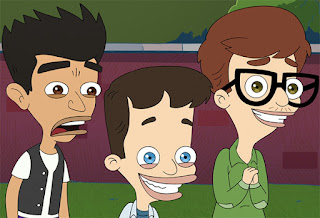 1. Best bud Andrew Glouberman, left (co-creator John Mulaney), who masturbates every chance he can get, but also gets some girlfriends, with whom he engages in the Princeton Rub. 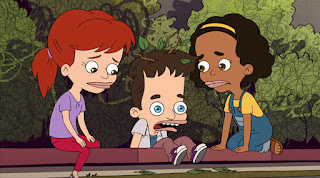 1. Jessi Glasser, left (Jessie Klein), who is interested in both Nick and Jay.

2. Missy Foreman-Greenwald, a girl with braces who is everybody's "just friend."

3. Gina Alvarez (Gina Rodriguez), who has big boobs and knows how to use them.

So basically the distaff side of Nick, Andrew, and Jay.

Well, a little.  Early on, Nick wonders if he might be gay because he likes Andrew -- a lot.  But he realizes that he can love a guy without wanting to see his weiner. 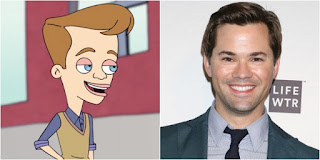 He appears in only a few episodes, as a supporting player and snark, taking center stage only twice, in Season 2:

In the Season 2 episode "Guy Town," he finds himself having a "gay-off" with a gay resident of a seedy apartment complex (Harvey Fierstein), who suggests that he tone down the snark if he wants to have any friends. 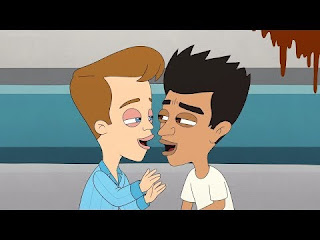 In "Smooch or Share," the Season 2 finale, Matthew and Jay have to kiss during a spin-the-bottle type game.  Later both reveal that it was their first kiss, and Jay surprises him with another.

So maybe the two will be dating in Season 3.

Is There Beefcake at Weeki Wachee? 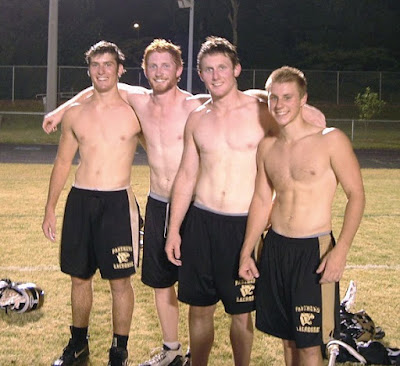