Richard Chamberlain: King of the Miniseries 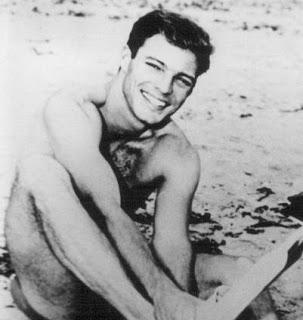 Some Boomers recall gay actor Richard Chamberlain as the young, idealisticvDoctor Kildare (1961-66), or the swashbuckling adventurer of The Three Musketeers (1973), The Count of Monte Cristo (1975), and The Man in the Iron Mask (1979), but I don't remember seeing him before The Last Wave (1977), where he played an outsider trying to understand an alien culture, with a strong homoromantic subtext. 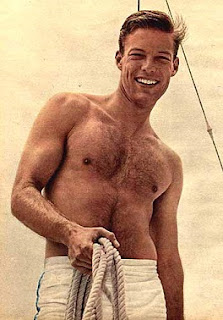 In the late 1970s and early 1980s, Richard became "The King of the Miniseries," starring in vast made-for-tv epics set in exotic locales,  usually as an outsider trying to understand more alien cultures, with more homoromantic subtexts.
The first part of the overlong Centennial (1978-79) involves the homoromantic friendship between a French trapper, Pasquinel (Robert Conrad) and Scotsman Alexander McKeag (Richard), who triangulate their romance by falling in love with the same woman.

In Shogun (1980), Englishman John Blackthorne (Richard) is shipwrecked in 17th century Japan, and becomes involved with the struggle of the warlord Toranaga (Toshiro Mifune) to become Shogun (supreme ruler).  The previews emphasized the requisite hetero-romance, but the miniseries was really about the strained attraction between the Japanese warlord and the mysterious outsider. 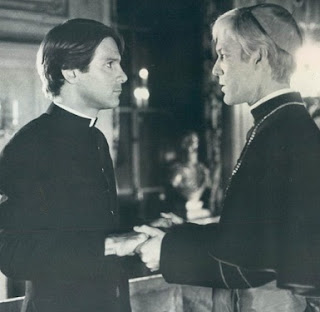 In The Thornbirds (1983), Irish priest Ralph de Bricassart (Richard) is sent to a remote village in Australia, where he has an affair with central character Meggie.  Years later, Ralph returns and meets his grown-up son (Philip Anglim). Neither is aware of the other's identity, so when they experience an odd emotional connection, it is easy to mistake it for homoromantic desire. 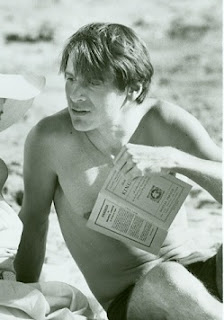 By the way, here's a shirtless shot of Philip Anglim, who also starred in The Elephant Man (1982) and in several episodes of Star Trek: Deep Space Nine.

Though Richard was not publicly gay during this period, he was open about his romantic partners, first  Wesley Eure of Land of the Lost, and later Martin Rabbett, who starred with him in Allan Quartermaine and the Lost City of Gold (1986). They were together for 33 years before separating.
Posted by Boomer No comments:

All in the Family's Gay Episode 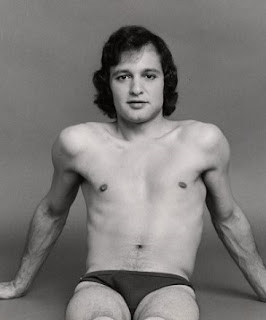 Speaking of firsts, the first specifically identified gay character on tv appeared on an episode of All in the Family on February 9, 1971, only 1 1/2 years after Stonewall.  I didn't see it at the time: the church forbade All in the Family because Archie Bunker's daughter and son-in-law were atheists.  I was probably watching Boy from Dead Man's Bayou, starring Mike Lookinland. 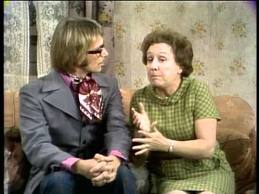 Lovable bigot Archie (Carroll O'Connor) gets upset when Mike and Gloria's hippie friend Roger (Anthony Geary) behaves in a flamboyant fashion.  He must be a fruit!  They insist that he's not, but Archie is not convinced.

Meanwhile, at the bar where Archie hangs out, bartender Barney (Billy Halop, another of the original Dead End Kids) points out tough ex-footballer Steve (Philip Carey).  "I don't care if he comes in for a beer, but I don't want his. . .friends. . . turning this place into a hangout." 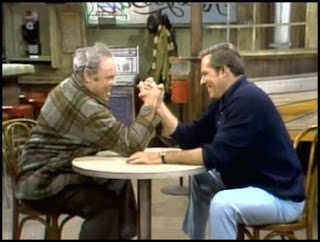 Archie confronts Steve, who admits that he is, indeed, gay.  Archie refuses to believe it, and as proof, challenges him to an arm wrestling contest.  Steve wins, but he's still gay.

It's not exactly a gay pride moment.  The moral is: appearances can be deceiving, so don't judge until you have all the facts.  Being gay is still reprehensible, something heterosexuals "judge." 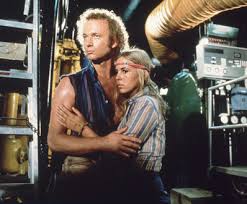 But it's a lot better than the cadres of lisping, limp-wristed fashion designers and psycho-killers who would populate television for the next twenty years.

Philip Carey was a long-term Hollywood tough guy with starring roles in The 77th Bengal Lancers, Lancer, and Tonka, with Sal Mineo (top photo). He went on to play Asa Buchanan on One Life to Live (1987-2008).

Coincidentally, Anthony Geary is bisexual in real life.  He would go on to General Hospital (1978-2013) playing rapist-turned-romantic hero Luke Spencer in the most famous soap opera story arc of all time (30,000,000 people watched him marry Laura Webber on November 17, 1981).
Posted by Boomer No comments: 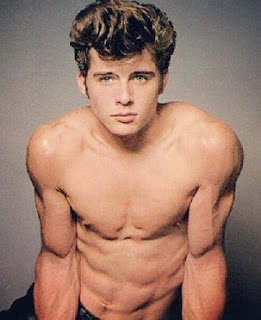 Grease (1978) played into the 1950s nostalgia craze, united two of the biggest stars of the era, and featured songs that wowed audiences on Broadway.

Everyone expected another mega hit which would make the careers of stars Maxwell Caulfield (left), Michelle Pfeiffer, and Adrian Zmed.

The plot was a reverse of the original, in which the innocent Australian transplant Sandy (Olivia Newton John) adopts a cool facade to attract the attention of Danny (John Travolta) and wrest him from his greaser buddies. 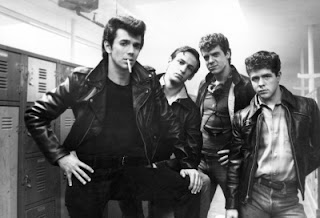 This time innocent British transplant Michael (Caulfield) adopts a cool facade (as the mysterious Cool Rider) to attract the attention of Stephanie (Michelle Pfeiffer) and, not coincidentally, her boyfriend Johnny (Adrian Zmed).  He manages to snare them both, sort of: Stephanie becomes his girlfriend, and Johnny offers him a membership in the T-Bird gang (left). 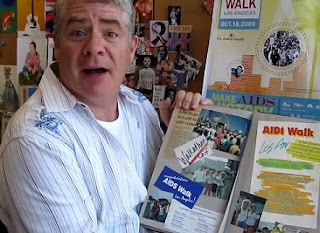 By the way, the bulge on the far right belongs to Leif Green (comic relief character Danny Jaworski), who went on to organize the first AIDS Walk in Los Angeles in 1985, and many other AIDS Walks and Dance-a-Thons over the next 25 years. 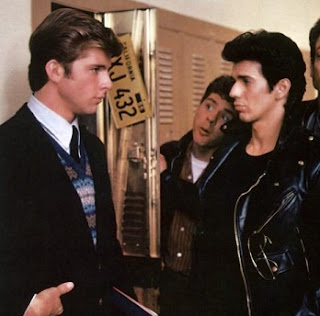 The gay subtext is helped along by Caulfield and Zmed, who were widely rumored to be gay at the time, like John Travolta and Olivia Newton-John before them.  Both posed in the gay-vague After Dark magazine.

The movie didn't exactly bomb at the box office, but it was by no means a hit.

Maybe because the nostalgia craze was over.  Audiences wanted heroic fantasy like Clash of the Titans, or epic adventures like Raiders of the Lost Ark. or werewolves.

Maybe because the actors were unknowns.

Maybe because the songs were terrible.  Instead of "You're the One that I Want," "Rock-a-Hula Luau."

Still, the cast went on to respectable careers.

Maxwell Caulfield went on to some homophobic movies and soap operas, including starring roles on Dynasty, The Colbys, and Emmerdale.

Adrian Zmed (left) starred in T.J. Hooker and any number of Circus of the Stars tv specials.

Both were not at all shy about posing for semi-nude and Speedo pics.
Posted by Boomer No comments: