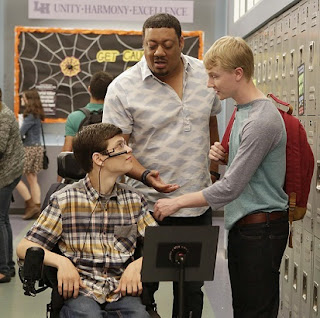 We need more disabled actors playing disabled people on tv, but it's hard for non-disabled writers and directors to make the characters authentic, .

It's a nuclear family sitcom with Mom, Dad, and three kids, one of whom, the teenage JJ (Micah Fowler), is confined to a wheelchair and "speechless" due to cerebral palsy.  He uses a communication board to spell out words and phrases. 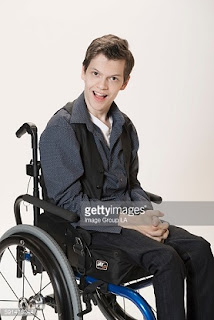 18-year old Micah Fowler has cerebral palsy but can speak.  He notes that it's difficult to adapt to a non-speaking role.  There's a lot of eye-rolling and grimacing involved. . 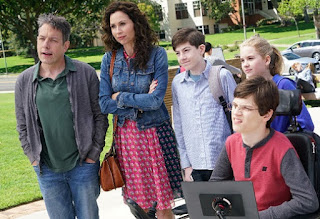 The rest of the family is filled in by a nebbish dad (John Ross Bowie, the bully Kripke on Big Bang Theory), a fiercely protective Mom (Minnie Driver), the conniving little brother Ray (Mason Cook), and a sarcastic sister, whose name I didn't catch (Kyla Kenedy). 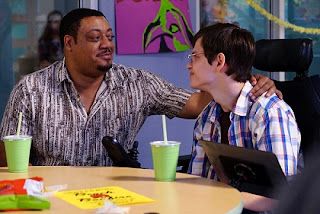 The A plot of each episode involves JJ's push for independence (he plays hockey, joins the choir, gets drunk at a party), with Ray's conniving in the B. 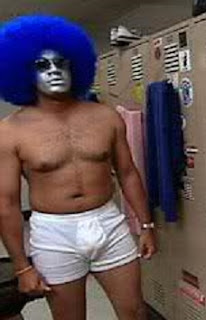 Speechless is smartly written, with few moments of gag-inducing smarm.  My only complaint is that heterosexism reigns supreme.  Plotlines involve what boy is interested in what girl.  No gay people exist, unless Kenneth happens to be gay (he hasn't mentioned any romantic interests of any sort).

No beefcake, either.  Although Cedric Yarbrough has a nice physique, it's under wraps. 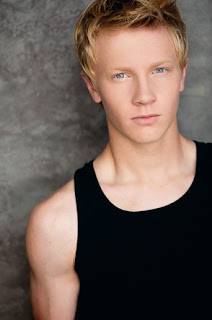 There are occasionally cute guys in guest roles, like Joseph John Schirle as Ben (one episode). 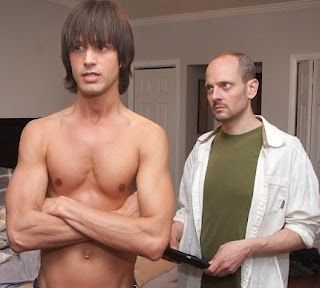 The only gay connection I could find was Emerson Collins, who plays teacher Mr. Powell.  He played half of a gay couple with Jonathan Slavin (left) in The Boomerang Effect.

Bedtime Story Boyfriends: The Wind in the Willows 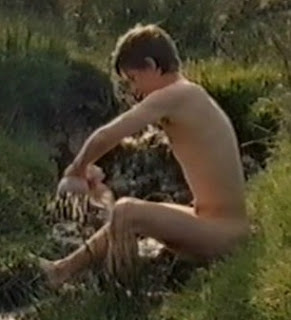 One of the favorite books of my childhood, The Wind in the Willows, was about two animal boyfriends in Edwardian England.  In the first chapter, the Water Rat is single, "messing around in boats" on the banks of a wide river (played by Lee Ingleby, in the 2006 Canadian movie). 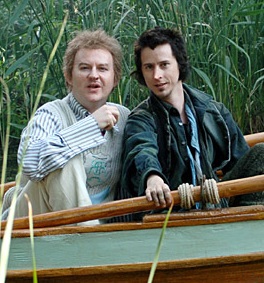 But then he meets the timid Water Rat (gay actor Mark Gatiss), and invites him to move in. With no fanfare, they become a couple.

There are a few challenges to their relationship: Mole misses his old life underground, and Rat longs to explore the world beyond the River -- but the crises are quickly resolved, and the two men always return to the life they have built together, their romantic bond blatantly, painfully obvious. 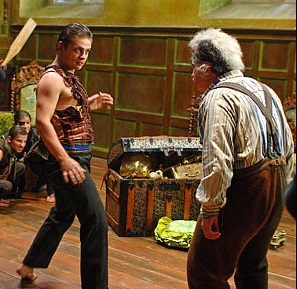 The rest of the book involves the problems of their friends. The pompous Toad (gay actor Mark Lucas) steals a motor-car.

The reclusive Badger (Bob Hoskins) must defend his home from an invasion by juvenile-delinquent weasels (led by Radu Micu).

I knew that the gay subtext was strong and noble, but I figured it was accidental until, in graduate school at the University of Southern California (1985-1989), I read up on the life of Kenneth Grahame.  I even tried to include him in my doctoral dissertation.

Born in 1859, his parents forced him to become a banker; but he looked from afar at the glittering homoeroticism of the aesthetic and decadent movement.  He read Arnold Bennett, Max Beerbohm, and Karl Huysmans. He contributed to The Yellow Book.  He corresponded with Oscar Wilde. 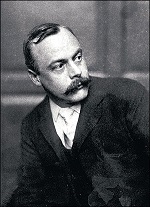 In an 1895 story, "The Roman Road," a mysterious young man tells Kenneth about a distant, perhaps mythical city, where the only inhabitants are "friends."  No husbands and wives, no boyfriends and girlfriends, just "the princes in fairy tales who don't get the princess."  Kenneth eagerly makes plans to go to the "City of Friends," but then the young man vanishes, and no one else whom he asks has ever heard of it.

But Oscar Wilde's conviction for sodomy in 1895 scared Kenneth, and he distanced himself from the movement, and sublimated his same-sex desire.  He married in 1899, and had a son, Alastair, who heard bedtime stories about a Mole and a Water Rat who loved each other. They were published as  The Wind in the Willows in 1908.

Gay Surfers Down Under: Xavier Samuel 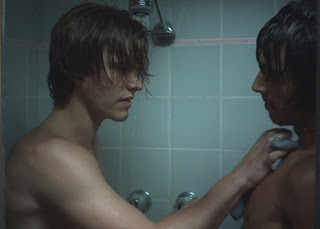 Speaking of the Twilight saga, Xavier Samuel, who plays muscular college-age vampire Riley Biers, has starred in many gay-positive movies and tv series back home in Australia.


2:37 (2006), a high school angst ensemble, with a gay dopehead facing homophobia (and getting a boyfriend). 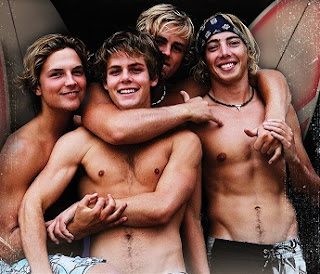 Newcastle (2008), about surfing brothers Jesse (Lachlan Buchanan) and Fergus (Xavier).  Fergus has a boyfriend, Andy (Kirk Jenkins).  They frolick naked in the surf. 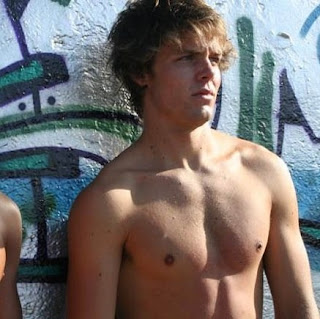 And even when there's no explicit gay content, there's plenty of homoromantic buddy-bonding.  And nudity 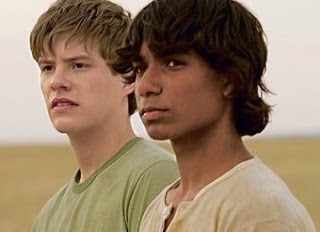 September (2007), about two teenagers, the white Ed (Xavier, left) and the black Paddy (Clarence John Ryan, right), trying to hold their friendship together during the turbulent 1960s.

A Few Best Men (2011), about a bridegroom (Xavier) who can't choose one best man from among his three mates. 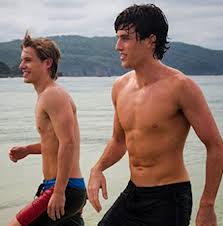 Two Mothers (2013), about two women who fall in love with each other's sons (Xavier, Ben Mendehlson), who happen to be best friends.  Haven't seen it, but apparently there's some beach frolicking.