The Penis Valley of Turkey 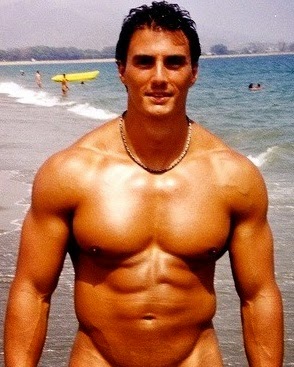 This post has been moved to Boomer's Small Town Beefcake
Posted by Boomer No comments: 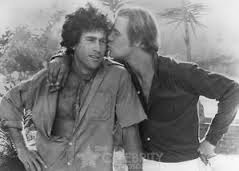 Paul Michael Glaser was half of the quintessential gay couple of the 1975-1979 tv series, Starsky and Hutch (with David Soul): two cop partners who loved each other, a lot.

Although they didn't play up the gay subtext, they were ok with it, merely issuing an occasional wink-wink protest like "Anyone who watches the show can see that Starsky and Hutch like women." 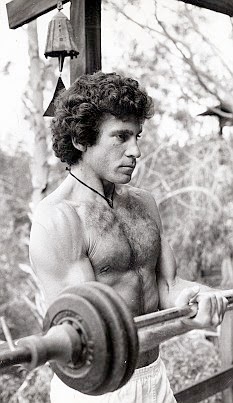 After Starsky and Hutch, Paul starred in a few tv movies, but then his attentions were drawn elsewhere.  In 1985 he and his wife Elizabeth discovered that she had contracted HIV through an emergency blood transfusion, and unwittingly transmitted the virus to their children, Ariel (born 1981) and Jake (born 1984).

During the 1980s, when AIDS was being advertised as a "Gay Disease," people assumed that Paul was gay, and had infected his wife and children.  They experienced the same fear and homophobic harassment that gay people with AIDS were experiencing.

But they didn't let homophobia affect their relationship with the gay community.  They were always staunch supporters of gay rights. 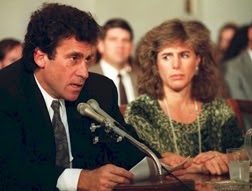 After Ariel died in 1988, Elizabeth began the Pediatric AIDS Foundation.  She became a national advocate for AIDS awareness and research, speaking at the Democratic National Convention in 1992.  She died in 1994, and Paul took on the management of the organization. 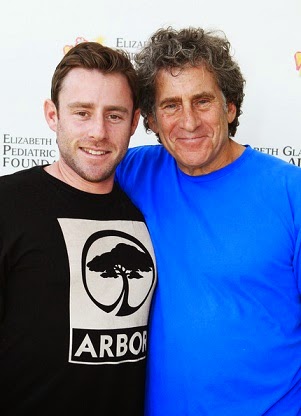 Jake has grown up living with HIV.  He is now an AIDS advocate and actor. 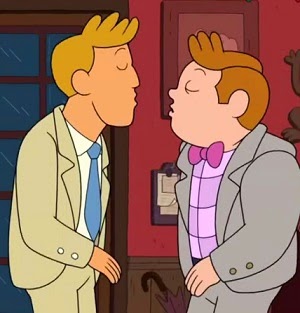 The Cartoon Network's  Clarence (2014-) was on my list of potential gay-subtext programs to watch, but I wasn't hopeful.  The premise seemed sort of boring: boy with some friends.  Where were the fairy godparents, wizard academies, or superheroes?

Clarence is a chubby, optimistic kid with two friends, Jeff (his rule-spouting superego) and Sumo (his get-er-done id).  He lives with his single mom and her live-in boyfriend, and has the usual assortment of bullies, crushes, and martinet teachers. 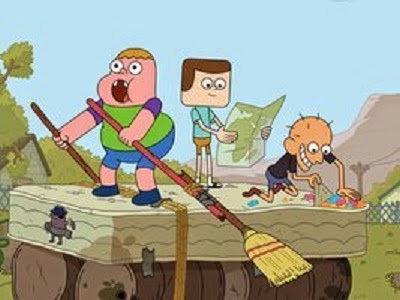 I watched one episode, and turned it off: Clarence, about age 10, was going on a date with a girl!  Why does indoctrination into heteronormativity have to begin so darn early? At least my parents, teachers, and friends waited until I was in junior high to begin the "What girl do you like?" interrogation.

According to the Clarence wiki, several of Clarence's friends also date girls or have crushes on girls. Doesn't sound promising. 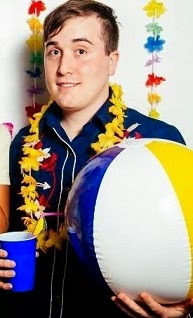 In July 2014, Skyler Page, who created the series and voiced Clarence, was fired after allegations of sexual assault by coworker Emily Partridge.  Other coworkers have since mentioned that Page often made sexist statements and behaved inappropriately.  Spencer Rothbell (left), one of the writers, became the new voice of Clarence.

Maybe the second season will be a little more inclusive.

The gay characters:  Clarence's teacher is waiting for a blind date.  A cute guy shows up.  She thinks, "Great, this is the one!"  But the cute guy is actually meeting another guy.  They hug and kiss cheeks.  Her face falls as she sees that her real blind date is ugly.

Un-named walk-on characters, one second on screen, presented as a problem for a heterosexual character, in a situation where no child is present.

But in the boardrooms of the Cartoon Network, where "Children must never know that gay people exist!", it's a giant leap forward.

Of course, fans are bound to scream"They can't be gay!  Friends kiss each other on the cheek!  Or brothers!  They could be brothers!"

Anything they can think of to avoid acknowledging that there are gay people in the world. 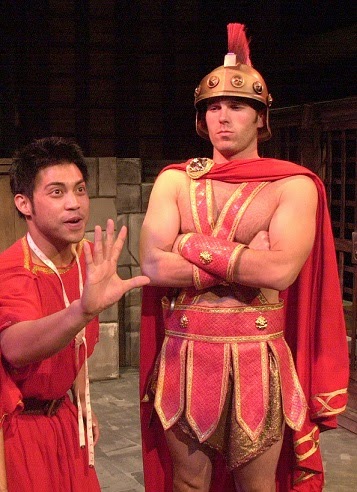 There's no Jesus in Jesus' Kid Brother, by Brian and Mark Karmelich, but there is significant beefcake, and some gay subtexts.

Growing up in the Christ family (apparently they weren't aware that Christ is not a surname), Larry naturally feels some sibling rivalry with his celebrity half-brother.  But Dad Joseph tells him that, even though he can't be the Savior of the World, he can have an admirable life: "find a good job, and fall in love." 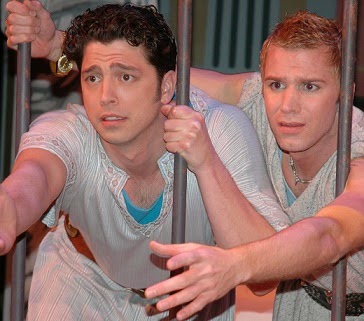 So Larry and his buddy Barabbas go out to look for a job.  En route, Larry meets Mary Pilate, daughter of Pontius, leader of the despised Romans.  They fall in love and go on the lam, pursued by Stu the Centurion, who is in charge of crucifixions, and his cross-makers, Kriss and Kross.

The last thing we need is another hetero-romance, but there are gay subtexts throughout, in the interaction between Larry and Barabbas, and especially in Stu, who appears to want Larry for himself. 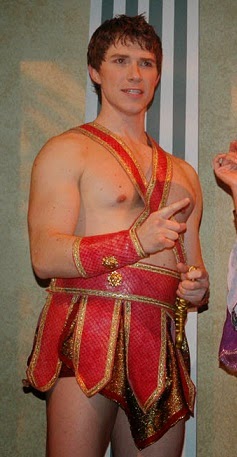 Uncle Tom's Cabin: The Slave as Object of Desire 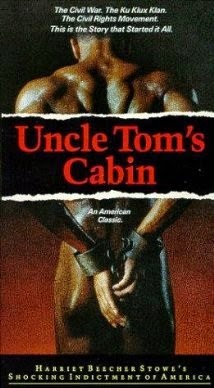 In the first years of the twentieth century, everyone read Uncle Tom's Cabin, the novel by Harriet Beecher Stowe (1852) that, in Abraham Lincoln's famous joke, "started the Civil War."

Or they went to see one of the many silent film or theatrical versions.

The characters and events were as intimately familiar as anything in today's Harry Potter or Twilight series.

You would call anyone evil a Simon Legree.

Anything with an unknown origin was compared to Topsy, who was never born; she "just growed." 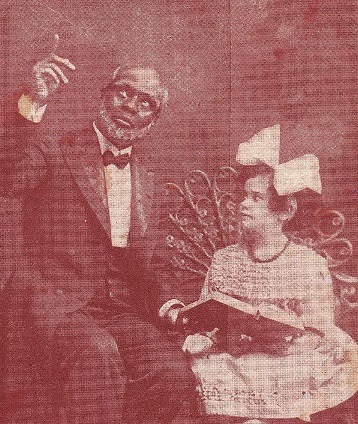 And Uncle Tom, the doddering, creaking, white-haired, who sang and danced and reveled in his slavery, proclaiming it the best of all possible worlds?

By the 1940s, his name was being applied to African-Americans who supported or abetted racist policies.  Today anyone in an oppressed group who sells out to the oppressor is called an Uncle Tom.

Like the gay writers and actors who fill our tv screens with screaming-queen stereotypes. 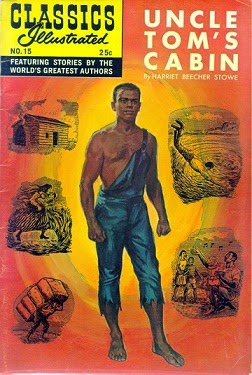 But in the original novel, Uncle Tom was no sell-out: he was strong-willed and principled, standing up to slave owners to obey the dictates of his conscience.

And he wasn't a doddering oldster: he was in his 40s, still strong, his muscles an object of both admiration and fear.

The comic book versions depict him as more of a sex symbol than an elderly minstrel, his overalls falling open to reveal his massive chest.

The  poster for the 1965 film version (top photo) shows the back side of a naked muscleman, and promises: "the real story of how it all happened -- the SLAVES, the MASTERS, the LOVERS!"

Although the movie contains no nudity and no lovers. 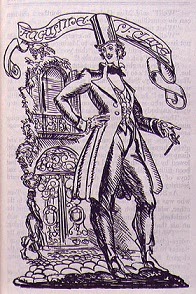 Uncle Tom has a wife in the novel, but she is of minimal importance.  What is important is the homoerotic desire that he elicits in his owners:

Simon Legree, who beats him because he refuses to harm another man.

And especially Augustine St. Clare, the gay-vague fop who opposes slavery even though his wife forces him to own slaves, and who wants to free Tom but can't bear the idea of not being able to gaze on his sleek, shimmering muscles anymore.