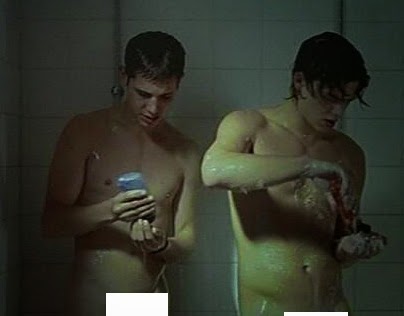 Pierre Perrier (great name!) has made a career of playing guys involved with men and women.

And Chacun sa nuit (One to Another, 2006), about a small-town teenage musician (Arthur Dupont) who is having affairs with just about everyone, from his sister to Sébastien (Pierre).  A definite disadvantage in tracking down his killer when he ends up dead.

He has only a small part in Le héros de la famille (Family Hero, 2006), about a drag performer/night club owner who dies, leaving coworkers, friends, and family scrambling to take over.  Maybe that's why there's no bisexual love triangle.

But he's back to the boy-boy-girl machinations with Plein sud (Going South, 2009). 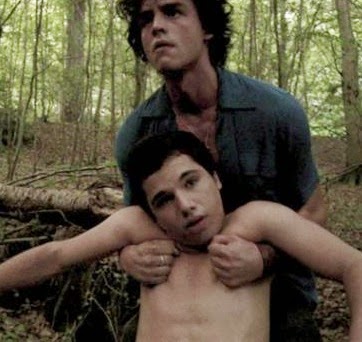 In American Translation (2011), a guy (Pierre) has a girlfriend (Lizzie Brocheré), but also enjoys having sex with gay men and then strangling them (here Arthur Harel). 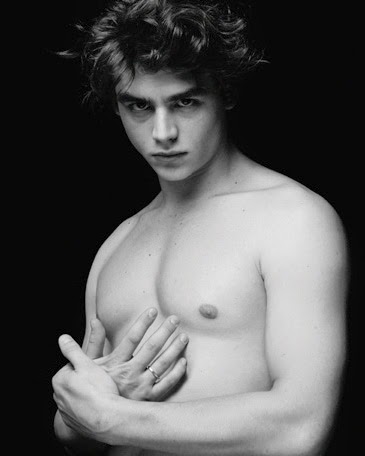 In the tv series Les revenants (The Returned, 2012), several people who died years ago return to a small French community, with no memory of their deaths or the passage of time.  Simon (Pierre) returns to find that his fiance is engaged to someone else.  She says that he committed suicide, but he believes that he was murdered.  No gay content.

Still, that's quite a lot of same-sex romance and sexual machinations.  And when you consider that most of Pierre's movies feature frontal nudity, sometimes even with arousal, it makes his career well worth following.

James Shigeta and His Gay Buddies 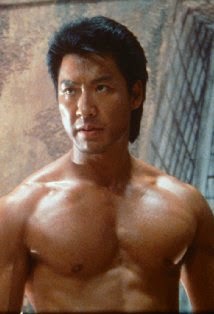 Asian male actors have been underrepresented in American media, and when they appear at all, they are typecast as computer nerds and wise purveyors of inscrutable wisdom, never as hetero-romantic leads.  Even when they are action heroes, they never "get the girl."

Except for James Shigeta, who died a few days ago at the age of 85.   When he first started out in Hollywood in the 1950s, he broke through the racial barriers to land hetero-romantic roles.  One was even interracial, which scandalized audiences in the 1960s.

Generally the pursuit of The Girl was mediated by a competitor or buddy, giving Shigeta's movies a number of pleasant gay subtexts. 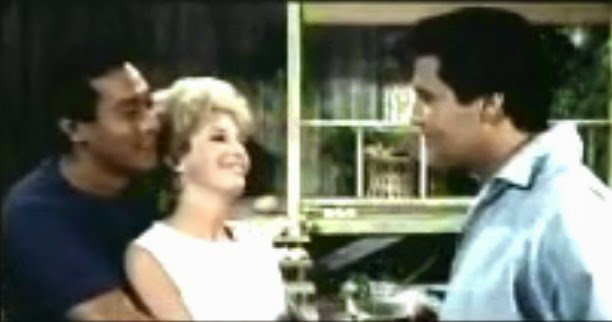 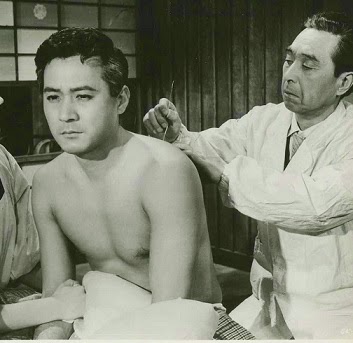 Nobody's Perfect (1968): In Japan, an American soldier (Physique Pictorial star Doug McClure) falls in love with a Japanese woman who is betrothed to a traditional man (Shigeta).

Shigeta received fewer starring roles after the Swinging Sixties ended, but he appeared on tv in Medical Center, Mission: Impossible, The Young Lawyers, The Streets of San Francisco, and Hawaii Five-O, playing both idealistic young heroes and villains.

I remember him in Samurai (1979), a silly tv pilot with Joe Penny (then rumored to be gay) as a lawyer who goes undercover as a samurai warrior (which the producers thought was some kind of superhero).  Shigeta played Takeo, his Asian-wisdom-spouting sensei. 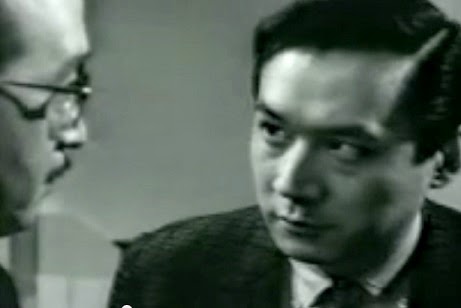 His last role was in The People I've Slept With (2009), about a woman who has had many lovers.  When she finds herself pregnant, she goes on a quest to find the father, accompanied by her gay BFF (Wilson Cruz). Shigeta plays her hip dad.

No wife is mentioned in his wikipedia article.  Maybe he was gay.

See also: What Happened to the Asian Beefcake? 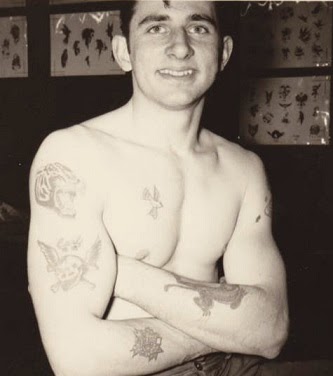 I have no time for Great Literature.  It's not only heterosexist, it's usually terribly depressing.

Like Thornton Wilder.  I've been force to read (or pretend to read) his stuff three times.

1. People fall to their deaths.

When we were in junior high, we were too young for Great Literature like Ulysses and As I Lay Dying, so our English teacher substituted The Bridge of San Luis Rey (1927), by Thornton Wilder.

"This is Great Literature," she said.  "It won a Pulitzer Prize because it's so great.  Read it, and you'll see."

I read the back cover blurb.  A group of people fall to their deaths when a rope bridge in the Andes collapses.

"Why on Earth would anybody write about something so terrible?" I wondered.  "I'm certainly not going to read it."

When the teacher asked us to "Explain the theme of this book," I wrote: "Everybody dies." 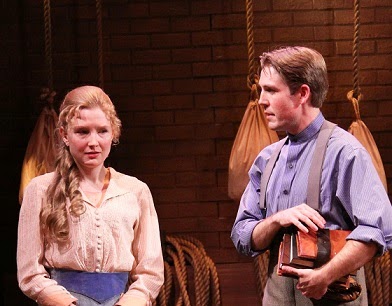 In high school, my English teacher assigned Wilder's Our Town (1938), which also won a Pulitzer Prize because it's so Great.

It's about small-town teenagers George and Emily fall in love and get married. Emily dies in childbirth.  The last act has her in the cemetery, talking to the other people who have died since Act I.

"Why would Thornton Wilder sit down and write this stuff?" I wondered.  "And why would people actually pay to see it performed?"

When the teacher asked us to "Explain the theme of this play," I wrote: "Everybody dies." again.  I got a D.  I guess she wanted detailed analysis.

I should have written "Emily and everybody else dies." 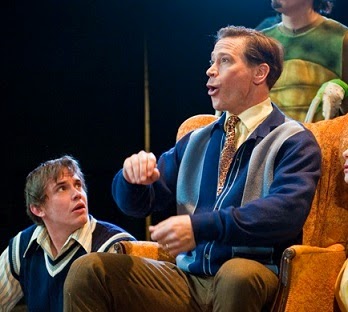 3. The world comes to an end three times.

When I was in grad school at the University of Southern California, my Modern Drama professor insisted that we read Wilder's The Skin of Our Teeth (1942), which also won a Pulitzer Prize because it's so Great.

I was leery, but also curious.  How could Wilder up the ante of depressing Great Literature?

Easy:  it's about a New England family, George and Maggie Antrobus, who are also Adam and Eve, and their two children, Henry and Gladys.  They live through the destruction of the human race three times.

In the First Act, by an Ice Age.
In the Second Act, by a Flood.
In the Third Act, by a cataclysmic war.

But every time they just start over again, and things go back to being exactly the way they were.

Talk about depression!  It's an endless cycle of death and despair!

When the professor asked us to "Explain the theme of this play," I wrote "It replicates the Hindu cycle of samsara, death and rebirth."  I got a C+.

And, by the way, none of the three works contain any gay characters, themes, plots, or subplots.  Nil.

Who was this Thornton Wilder who spent his life writing depressing, heterosexist Great Literature that I couldn't read, so I had to fudge, with the result of low grades? 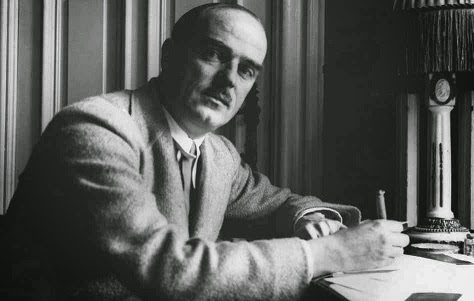 He was a celebrity writer,a bon vivant, who traveled in famous circles and knew everyone in the Jazz Age.  He was gay, but so tortured by self-hatred that he didn't do much about it.

Even with his close friend, the very hot Samuel Stewart, who later became famous as the novelist Phil Andros (top photo).  Stewart said that they had a relationship, but their sexual encounters were skittish, furtive, momentary, and never discussed.

"I am more and more willing to agree with certain authorities that homosexuality is negative — that it is, even when apparently aggressive, a submission to solicitations."

Ok, that sounds homophobic, until you remember that in Thornton Wilder's world, everything is negative.  There is no meaning, no hope, just suffering and the inevitability of death, no matter if you are gay.

See also: Why I am Not a Novelist.
Posted by Boomer No comments: 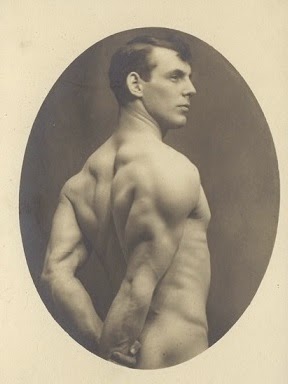 I found this photo on the internet.  An extremely muscular man, with a modern bodybuilder's physique, with his hands behind his back.  The caption said "Jasper Redfern...Sheffield."  Obviously the photographer.

Who was this Jasper Redfern who was taking photos of naked men at the turn of the last century?  Was he gay?

According to Who's Who of Victorian Cinema, Jasper Redfern (1872-1928) was a photographer and exhibitor for Lumière Cinématographe, an early film producer.

In 1899 he began to photograph sports matches, including Sheffield's football games, and in 1900 he took a tour of North Africa, making motion picture travelogues along the way. 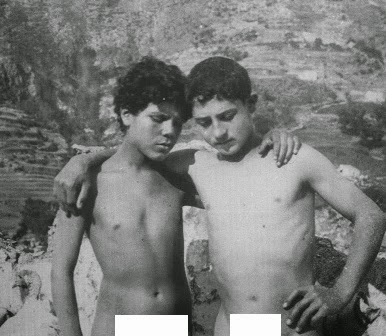 North Africa seems promising.  The "Lure of the Mediterranean" was very strong.  Gay men from Andre Gide to William Burroughs traveled there in search of homoerotic freedom.

Upon his return, Redfern became a full-time moviemaker, directing films like Uncle Podger's Mishaps and Kick Me, I'm Bill Bailey.  He opened the Jasper Redfern Palace by the Sea at Westcliffe, which offered offered a variety of Vaudeville acts in addition to film. 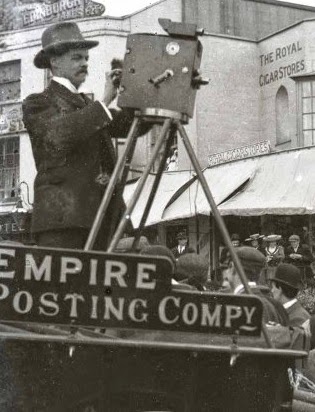 Later he devoted himself to medical research, experimenting with the use of X-Rays to cure cancer.  Ironically, he died of cancer caused by over-exposure to X-Rays.

No mention of a wife and kids, but he may have had some. 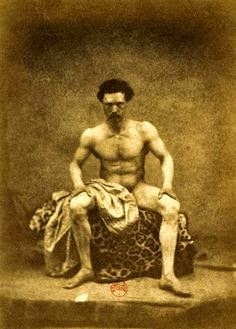 So why the muscleman?

It's a cabinet photo from the 1880s, when Redfern was still a teenager, still thinking about his life's work.

Often the photos were sold to painters as a cheap alternative to hiring models.  Maybe Redfern sold it to a student at the Sheffield Institute of the Arts.

Or maybe he kept it, as a model for his own destiny.
Posted by Boomer No comments: 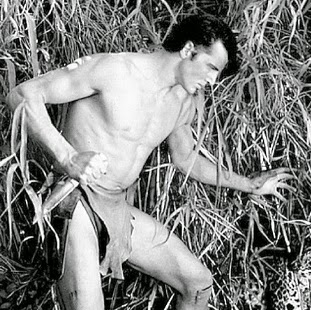 The iconic Tarzan has always been Johnny Weissmuller, who took Edgar Rice Burroughs' sophisticated, multilingual Lord Greystoke and embued him with  "me Tarzan" jargon, the fake-African "Umgawa," the chimp companion, and the vine-swinging.  But for a trick of fate, Herman Brix would have become the Ape Man.

Like Weissmuller, Herman Brix was an Olympic athlete. He won a silver medal for the shot-put in 1928.  He moved to Los Angeles in 1929 and went to work in the movies.  In 1931, MGM chose him to star in the new talkie, Tarzan the Ape Man, but he broke his shoulder before filming could begin, and Johnny Weissmuller took his place. 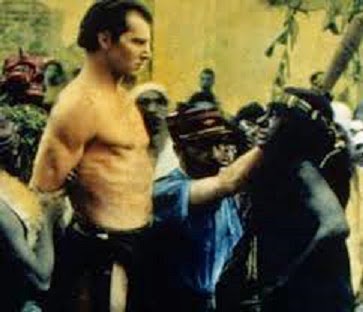 But a few years later Brix had another opportunity to play Tarzan, in a movie serial, The New Adventures of Tarzan (1935).

It was so popular that Brix became typecast as Tarzan, and found it difficult to get other work.

He de-Germanized his name into Bruce Bennett, and appeared in many more movie serials, Westerns, and detective movies.  After serving in the Navy during World War II, he continued to work, mostly in B-movies. 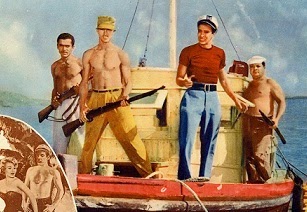 In 1961, he wrote and played the villain in The Fiend of Dope Island.  The "dope" is marijuana, which whip-wielding Charlie Davis (Bennett) forces innocent Caribbean natives to grow for him, until David (Robert Bray) shows up. 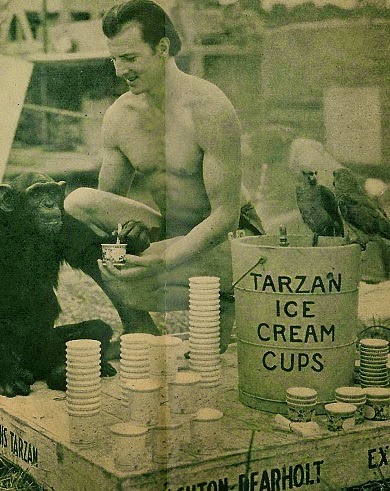