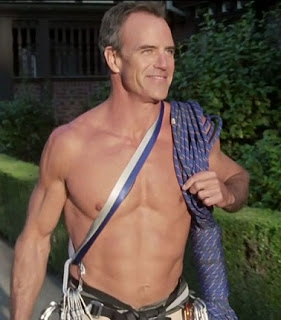 If you discovered that police detective Jim Ellison (Richard Burgi, left) was living with an anthropology grad student named Blair Sandburg (Garrett Maggart, below), bringing him to work as a "police observer," and basically spending every waking -- and sleeping -- moment with him, what would you think? 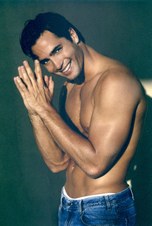 What would anybody think?

Obviously, that Jim is a Sentinel, a Buffy the Vampire Slayer given the task of saving the world from paranormal evil, and Blair is his Watcher, and they're both heterosexual. 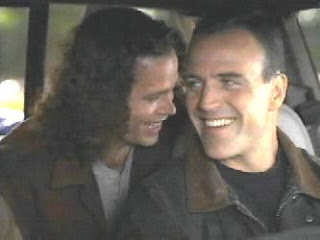 Apparently the producers didn't realize that gay people exist, so they had no idea that a gay subtext was possible.  Nobody in gay-free Cascade, Washington ever "mistakes" the duo for a gay couple at any time during the 65 episodes of The Sentinel (1996-1999). 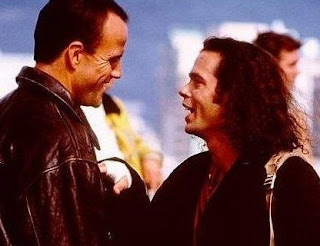 But fans had no trouble identifying the passionate, physical buddy-bond as homoromantic.  Shipping became a main pastime, and thousands of fan fictions were posted. 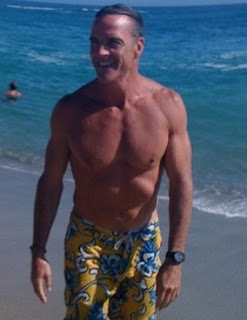 The heavily-muscled, often-shirtless Richard Burgi got his start as a soap hunk, and played the doctor who thinks everything is "breathtaking" on Seinfeld.  In addition to The Sentinel, he's starred in One West Waikiki, 24, Judging Amy, The District, Point Pleasure, Desperate Housewives, and Body of Proof, usually as a cop, a heavy, or a muscle guy.  No gay characters.

Garret Maggart's slim, androgynous looks make it easier for producers to cast him as gay characters, on stage and on film.  His first role, in fact, was in the gay-themed Brothers, which starred his father, Brandon Maggart.  He's also appeared on Frasier, Days of Our Lives, CSI Miami, and the movie Vampire (2010).

The X-Files: Only Heterosexuals Believe

The X-Files (1993-20002) came on Sunday nights in the vicinity of The Simpsons, and I'm a big fan of the paranormal, so I watched.  It was about two paranormal investigators working for the FBI: True Believer Fox Mulder (David Duchovny, then known primarily for the sex drama Red Shoe Diaries) and skeptic Dana Scully (Gillian Anderson, then relatively unknown).

They worked on "monster of the week" cases, like a serial killer who can slide under doorways or a little girl who is the reincarnation of a slain police officer, while investigating the Big Question: what happened to Fox's little sister, who vanished from their home when he was a kid?

He believes that she was abducted by aliens, but the truth turns out to be bigger, vaster, scarier -- and much more convoluted -- than anyone could imagine, drawing on government conspiracies, cloning, and who knows what else?  Frankly, I don't really remember the truth.  I just remember so many horrible things happening to Scully, rape, abduction, cancer, murder of her sister, death of her child, more abductions, that it became painful to watch.

Though I liked the episode where Michael Emerson, later head of the evil Others on Lost, conjures up real-life versions of The Brady Bunch to keep him company. 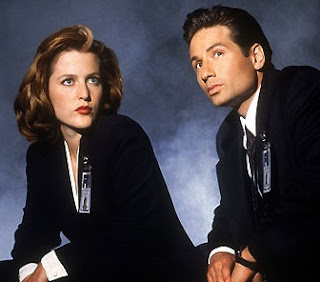 In spite of their ongoing insistence that they were "friends," the Powers That Be couldn't abide platonic male-female relationships, so they fell in love, hugged and kissed, and had a child together (or two, depending on whether you're counting both real and fake, alien, and demon-possessed Mulders).

I don't remember any gay characters, though I am told that the episode "All Things" contains an unstated lesbian relationship  Otherwise Mulder and Scully are not aware of the existence of gay people.  In "Gender Bender" (January 21, 1994), a serial killer seduces and kills both men and women.  But wait...how could he seduce a man?  Scully suggests that he may wear women's clothes, but  Mulder rejects this possibility out of hand -- it's impossible for any man be fooled by drag! 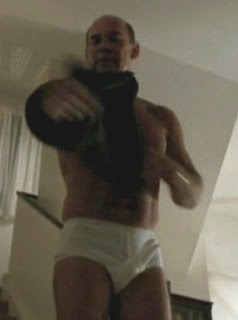 But how else could he lure a man into a sexual encounter?  They are dumfounded.    Until they discover that the being changes sex at will, becoming a man to seduce the women, and a woman to seduce the men. I guess same-sex behavior doesn't exist after all.

There was some beefcake, bulges, underwear shots, and semi-nudity, if you're into Duchovny, or his bear boss Skinner (Mitch Pileggi, left).

David Duchovny is not exactly a gay ally; although he was invited to Outfest Legacy in 2007, he made the oddly homophobic request that someone cover his daughter's eyes so she couldn't see the movie clips.  Did he think that all gay movies are pornographic?

Gillian Anderson made headlines in 2012, in an interview in Out magazine, in which she said she had a lesbian relationship in high school.  But only guys for the last couple of decades. 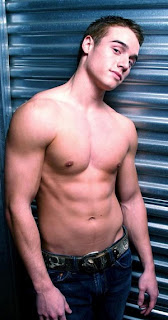 With a name like Brando, you have few career options open to you except show biz.  Born in 1986, he got his start in a recurring role on the teencom Zoey 101 (2006-2008), where his muscles were overshadowed by those of the regulars,  and a starring role in Do Not Disturb, which aired three episodes in the fall of 2008 before folding. 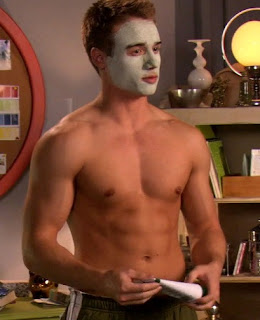 4. The gay teen Griffin in The Secret Life of the American Teenager (2009-2012), who is rather a stereotype, but at least he's not conflicted.  He even gets a boyfriend, Peter (Kristopher Higgins). Unfortunately, after 22 episodes he vanished without a trace (Peter, too), leaving Secret Life gay-free except for a lesbian mom plotline. 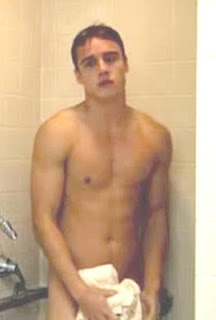 In real life Brando is straight but not narrow, perfectly happy to address his gay fans. 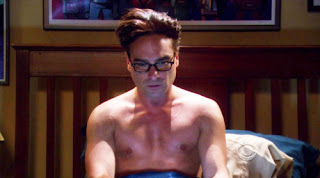 I occasionally watch The Big Bang Theory (2007-), the sitcom about four science-nerd guys, and more recently their respective girlfriends.  I like the science plotlines and the pop culture references, and the Pasadena locale, close enough to West Hollywood to give me a nostalgic vibe.  I like the beefcake and bulges -- who knew that science nerds had physiques like that?  I like the buddy-bonding between the female scientists.  But I don't like the undertone of homophobia. 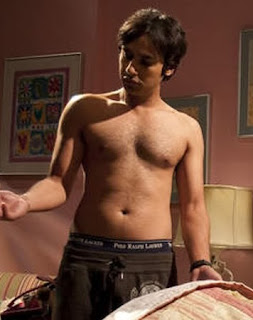 1. No gay characters, except for one episode in which Raj (Kunal Nayyar, left) is asked to participate in an arranged marriage, and his intended bride, Lakshmi, turns out to be a lesbian.

2. Lakshmi asks him to marry her anyway, as a screen.  Do we still have screen marriages in the 21st century?

3. No seems to know the difference between "gay" and "transvestite."  Lakshmi says that back in India, many people thought that Raj was "comfortable in a sari."  Raj responds: "I'm not gay."  Hey, Raj, gay men don't all necessarily wear women's clothes. 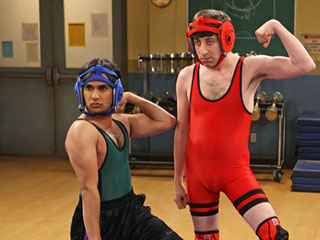 5. Raj is frequently ridiculed for feminine-coded mannerisms, with the implication that he might be gay.

6. He had an obvious homoromantic bond with Howard (Simon Helberg, right), played as pathetic and creepy. Leonard's visiting mother, a psychiatrist, explains that they both have a "pathological fear of women," so they have "created an ersatz homosexual marriage to satisfy your need for intimacy."  Got it.  Gay people are inferior. 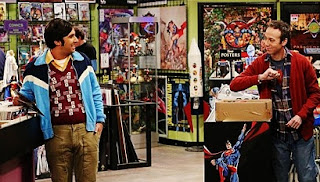 7. After Howard's marriage, Raj asks comic-book store owner Stuart (Kevin Sussman, right) for a date.  Soon they are living together.  But the relationship, again, is framed as a pathetic substitute for a real, true, satisfying bond with women. 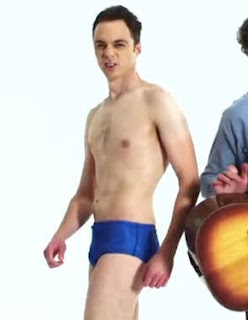 8. Sheldon was a breath of fresh air, the only young adult male on prime time tv who didn't spend every moment of every episode tongue-lolling over girls.  But we can't have that, can we?  Every young adult male must be hetero-horny, lest people think he's...um, you know.  Let's give him a girlfriend, Amy (Mayim Bialik).

9. In addition to her romance with Sheldon, Amy is obviously attracted to Leonard's girlfriend Penny (Katie Cuoco).  But does she just come out and say she's bisexual, like a normal person?  No, she grunts and squeezes and makes inappropriate come-ons.

10.  Jim Parsons is gay in real life, and Johnny Galecki, who plays Leonard, has starred in many gay positive projects.  They makes the ignorance and disdain of gay people even more annoying. 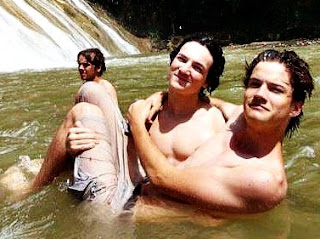 If you were a fan of Degrassi Junior High in the 1980s or Degrassi: The Next Generation in the 2000s, you will be interested in knowing that the Toronto high school full of teen drama is going strong on Nickelodeon's subsidiary Teen Nick. The latest generation includes
Good guy with a mysterious past Drew Torres (Luke Bilyik), and his bff Jake (Justin Kelly) 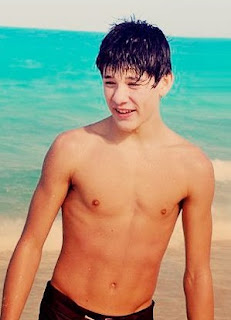 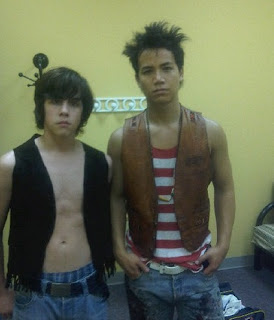 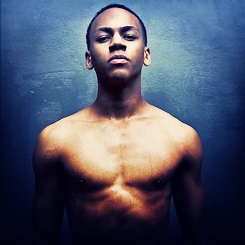 Dave (Jahmil French), who is cast as a gay Romeo in the school play, and doesn't think he can pull it off, until he gets lessons from Eli. 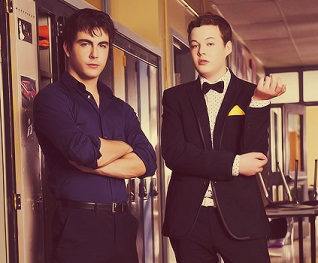 Flaming Kurt lookalike Tristran (Lyle O'Donohoe), who is teased about his weight, until his brother, hockey player Owen (Daniel Kelly), comes to his defense.

There's as much angst as ever, and the drama is not to everyone's taste, especially after a diet of giggly teencoms.  But since no American program aimed at a juvenile audience has ever yet featured a gay character or even used the word "gay," I'll take what I can get.
Posted by Boomer No comments: 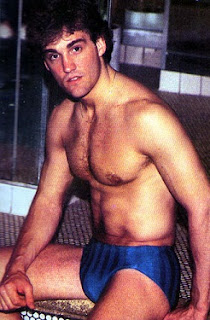 John Wesley Shipp got his start as the suave soap doctor on Guiding Light (1981) and never looked back.  His career is all about soaps, starring in them, writing them, directing them: Guiding Light, As the World Turns, All My Children, One Life to Live.  Along the way, he won two daytime Emmies, appeared in dozens of shirtless and underwear shots, and became the first crush of many gay boys and heterosexual girls. 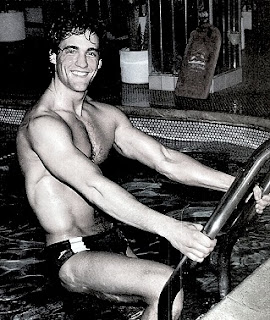 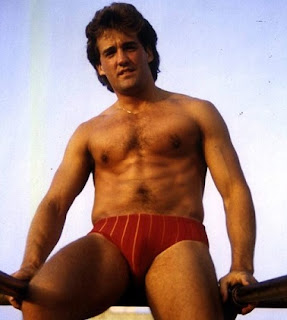 Fans of the moody evening soap Dawson's Creek know him for his three-year stint as the father of the moody titular character (1999-2002).

Although he's apparently gay in real life, there's no evidence to the often-heard fan contention that he dated his tv son (James Van Der Beek) or Pacey (Joshua Jackson).