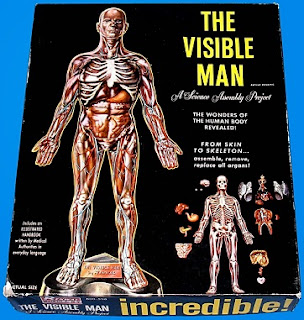 When I was a kid, I had a toy called "The Visible Man."  It was a model of a man with no skin.  You had to assemble the skeleton and put all of the organs in place (sadly, no penis), I guess to teach you anatomy. 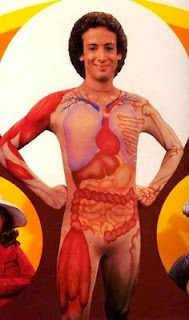 During the 1970s, actor John Burstein got the idea of becoming a human "Visible Man."  He painted muscles and organs onto a leotard, and as Slim Goodbody, set out to teach kids about anatomy.

As you can see, the effect was rather disgusting, and the guy had no physique.  But at least he sported a rather noticeable bulge. 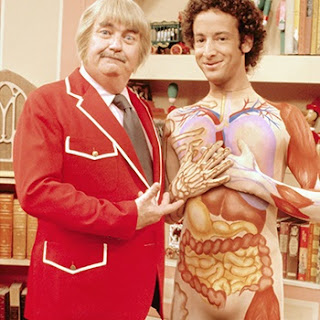 There are actually several different suits, with different organs and muscles on display.

Slim Goodbody struck a nerve with parents looking for educational programming, and soon he was appearing on the morning kidvid Captain Kangaroo twice a week.

He branched out from anatomy to nutrition, exercise, and personal hygiene, and eventually to such hot topics as bullying and environmentalism.

In 1980 he got his own PBS series, Inside Story.  Plus he appeared in a series of books and educational films. 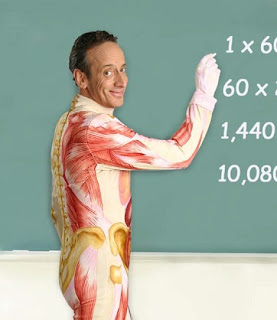 Slim became so busy that, for seven years, there were two of him.  While John Burstein concentrated on the tv series, actor and mime Bill Bowers played Slim Goodbody at schools, hospitals, and public events.

Burstein still performs as Slim Goodbody all over the United States and Canada.

Though outrageously fey in his Slim persona, Burstein is straight.  Bowers is gay. 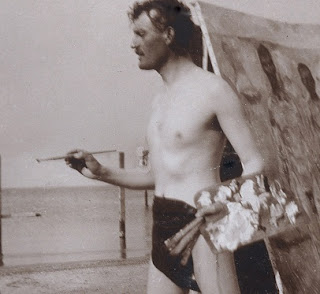 Most people know Norwegian painter Edvard Munch (1863-1944) from The Scream (1893), the expressionistic portrait of an agonized figure under an orange sky.  When I was in West Hollywood, you could get Scream t-shirts, masks, and blow-up dolls.

But Munch had a long career in Paris of the Belle Epoque, Berlin, and Kristiania (now Oslo).  He experimented with many styles, and produced a huge opus.

Including many male nudes. 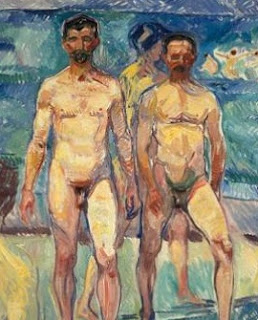 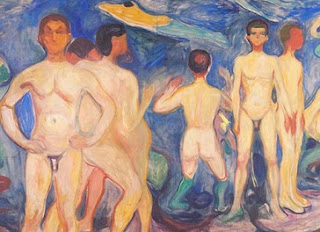 He painted female nudes, too, but the homoerotic power behind his nude male groups is undeniable. 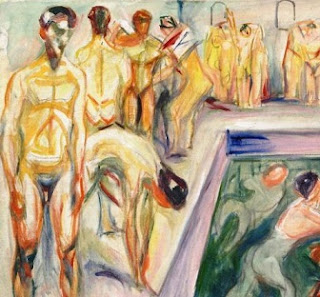 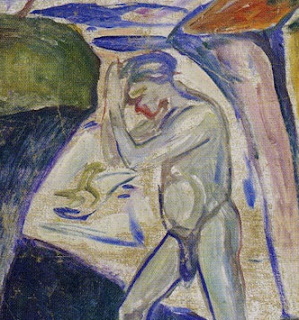 Munch never married or established any long-term relationship that we know of, and was plagued by alcoholism and mental illness throughout his life.  A few months after completing his monumental "Ages of Man" (1907-08), which depicts 12 naked men on the beach, he attempted suicide and was admitted to a "nerve clinic."

Sounds like a tortured, closeted gay man of the era of Krafft-Ebing and Hirschfeld.
Posted by Boomer No comments:

The Top 10 Hunks of "Spartacus" 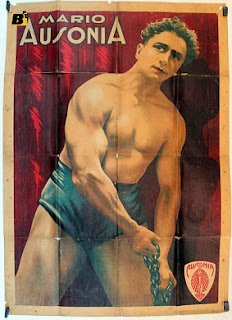 Spartacus (111-71 BC) was a gladiator who led a slave revolution that threatened the Roman Republic.  Although there's no evidence that he was fighting against slavery as an institution, he's been portrayed as a freedom fighter ever since.

And as a muscleman on a par with Hercules.

Here are the top screen hunks who put their biceps to work at Spartacus. 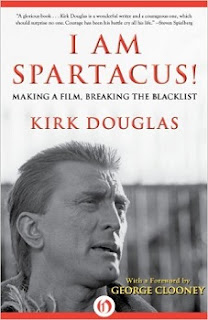 2. Kirk Douglas became the iconic Spartacus in the 1960 version, with Sir Laurence Olivier as Crassus, and the famous "oysters/snails" gay reference. 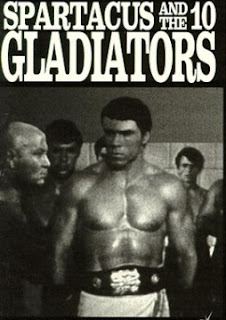 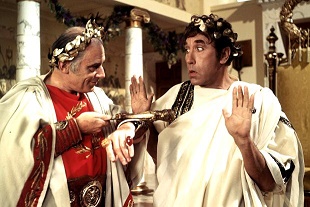 4. In 1970, the British spoof Up Pompeii!  had an episode with a slave uprising led by Spartacus (Shaun Curry, not shown). 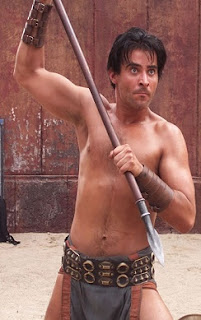 5. Goran Visnijic played a rather less than buffed version in a 2004 tv movie.