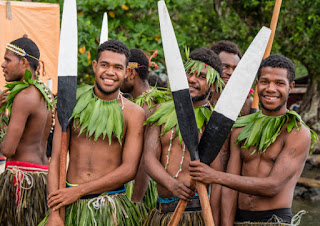 Papua New Guinea, the eastern half of the island of New Guinea, is one of the most remote places in the world for Americans.  Flights take about 30 hours and cost about $3000.  It's also one of the most crime-ridden places in the world.  Carjacking, armed robbery, and sexual violence are common  in the cities; roadblocks and armed robberies in the countryside.  You are cautioned to stay in well-traveled areas and don't go out at night.

So why go there? 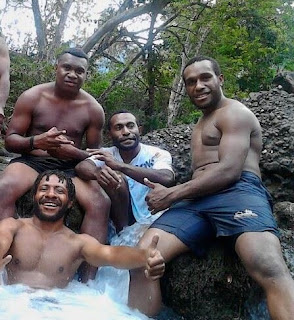 The "ritualized homosexuality" practiced by many tribes is a thing of the past, swept away by Christian missionaries and colonial officals.   British Colonialism has resulted in sodomy laws and social stigma. Some of the bars have gay nights, and Port Moresby has a gay neighborhood, Hanubada, but everything is strictly closeted.

So why go there? 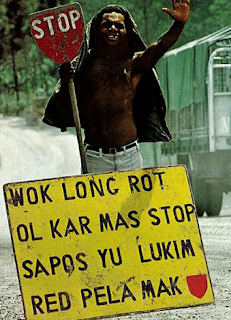 1. 850 languages, many isolates, unrelated to anything else on Earth.  The lingua franca is Tok Pisin, which started out as an English pidgin.

The sign translates to: Work on the road.  All cars must stop when you come across a red sign. 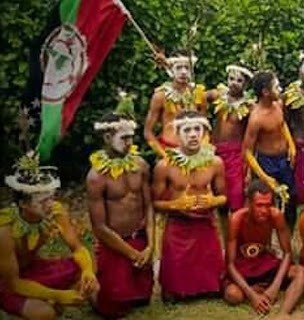 2. A rich cultural heritage, constantly replayed in festivals and celebrations. 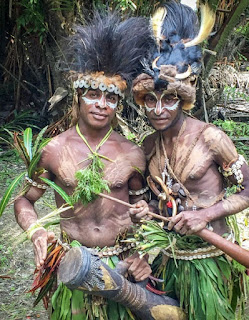 3. The men, some of the most attractive on Earth.  And since few emigrate to other countries, your only chance of meeting them is to get on that plane.

The Boxer of Bilko 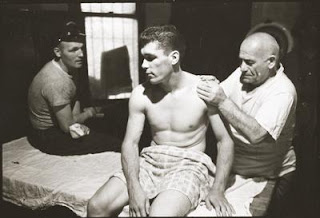 If you happened to watch the military comedy Sergeant Bilko (aka The Phil Silvers Show) from 1955 to 1959, or today on the Me TV network, you may have been surprised by the beefcake -- lots of hunky guys in t-shirts or underwear, quite unusual for the 1950s. 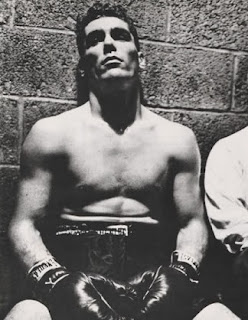 It turns out that Walter's grandfather, a violinist, made the name change from McCarthy to avoid anti-Irish prejudice.  Walter had a paradoxical career: a macho-coded professional boxer (46 wins, 13 losses), and a feminine-coded dancer.

After a couple of movie roles as a dancer, he was the subject of a feature article in Look magazine.  That drew the attention of Stanley Kubrick, who was looking for a "young, handsome, well-built fighter."  He used Walter in his first film, Day of the Fight (1951). 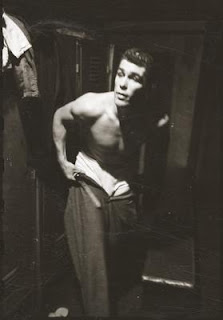 The Phil Silvers Show was another paradoxical role for Walter Cartier, a gentle muscleman.

Afterwards Walter had a few more minor roles, as a dancer on The Benny Hill Show and Fiddler on the Roof, and a heavy on the tv series Doomwatch. 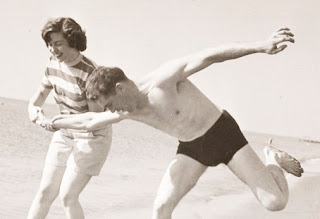 I don't know who the girl in the "frolicking with girl" pictures in Life Magazine is.  None of his bios mention a wife. Maybe he didn't have one.
Posted by Boomer 1 comment:

The Gay Scene of "Atlanta" 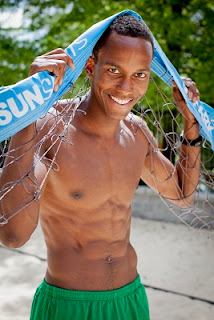 I tend to skip tv series pegged as "a remarkable accomplishment," "richly nuanced," and "a triumph."  It will be invariably be gay-free and full of hetero-romantic lo-oo-oove.

But the first season of Atlanta was cheap, and I figured I might get some black beefcake out of the deal. 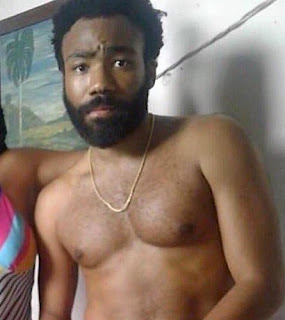 It's advertised as a comedy, but it's actually a drama with absurdist touches set in the hip hop-heavy world of Atlanta.

Slacker Earn (Donald Glover, no relation to Danny Glover) has failed at everything he's ever tried, to the  "I've heard it all before" disapproval of his girlfriend and parents.  Lately he's been trying to help his cousin Alfred (Brian Tyree Henry) start a rap career under the name Paper Boi.

The first episode began with a shootout in a parking lot, and then a lot of hugging and kissing between Earn and his girlfriend, so I skipped to Episode #2, which, according to the episode guide, "deals with issues of homophobia and transphobia."

Problem: Earn and Alfred mumble.  Words slur into other words.  They interrupt and talk over each other  It's like a real conversation, overheard from across the room, loaded down with hiphop slang.  I can't understand most of what they are saying.  Fortunately, most of the other characters enunciate.

1. Earn and Alfred are at the police station, waiting to be booked for "disturbing the peace."  Riffs on injustice in the justice system and annoying bureaucratic red tape.  They discuss whether female-presenting person Lisa (Jason Jamal, top photo, in drag) is a man or a woman, and tease each other about wanting to hae sex with her (I think.  The dialogue is mostly "mumble, mumble...that's a man, man....  mumble, mumble...shiiit, no....mumble, mumble...you know you would.")

2. The light atmosphere turns dark when another inmate spits toilet water into an officer's face, whereupon he is savagely beaten and tazed.  In some states spitting on someone is a felony, due to the unfounded fear that you can transmit HIV that way.

3. Alfred is released on bail and goes out into the world, where he is discomforted by doting fans. A woman gets upset with her children for pretending to shoot each other, as in Paper Boi's song about shooting someone, but when Paper Boi himself shows up, she's all smiles and selfies.

4. Alfred and his sidekick Darius (Lakeith Stanfield of Get Out) go to a bar and have an existential conversation, I think.

5. Meanwhile, Earn is still in the holding tank, waiting to be assigned a jail cell, because his girlfriend won't pay his bail.  A guy turns around and goes into a long monologue about not seeing his friend for 12 years, and then getting into a fight with him. 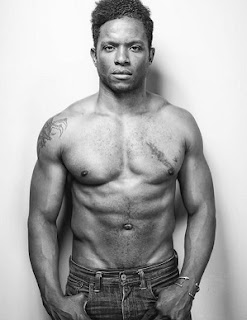 6. Now Earn is stuck between Johnny (Luke Forbes) and Lisa, who are flirting but won't let him move.  Apparently they dated in high school.   The other inmates point out "Dude, that a man.  You gay!"  Johnny insists that he's not gay, becoming more and more irate.   Earn tries to defuse the situation: "Sexual orientation...mumble, mumble... complicated.... mumble, mumble...do what you want."

I agree that a man who is interested in female-presenting persons is not gay, regardless of what type of equipment they have. But this all has an unpleasant homophobic taste. 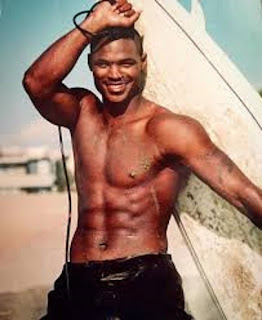 But apparently the rest of the series is gay-free.

Later episodes continue to mix hefty levels of violence with absurdist humor. There is ample beefcake  (such as Harold House Moore as someone named Swiff, no "t"),  and even some penises on display.

And a lot of boy-girl lo-oo-oove.