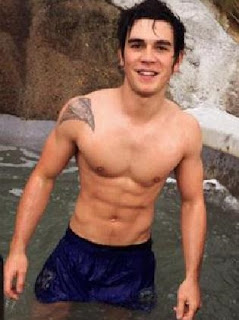 Archie Andrews and his pals and gals at Riverdale High have been entertaining kids since 1942, mostly in comics, but there have been scattered tv series, movies, books, and songs ("Sugar, Sugar," by the Archies, hit the top of the pop charts in 1969).

There have even been some serious versions.

The Afterlife with Archie series (2013) brings a zombie apocalypse to Riverdale.

In a 2014 comic, an adult Archie is killed while heroically trying to save his buddy from an assassin's bullet.

The latest angst offering is Riverdale, an upcoming teen drama on the CW Network.

New Zealand actor K. J. Apa has signed on to play Archie Andrews, "an intense, conflicted teen" who is torn between romantic involvements, worried over his career goals, and head-butting with his father (former teen angst star Luke Perry) and football coach. 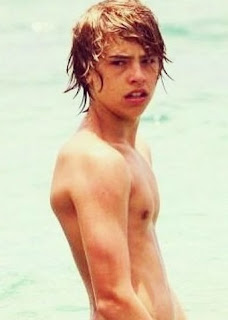 At least they're upping the beefcake opportunities.

Lili Reinhart plays Betty, a wholesome girl-next-door who clashes with her mother (former teen angst start Madchen Amick) and is seduced by the glamour of her new best friend Veronica. 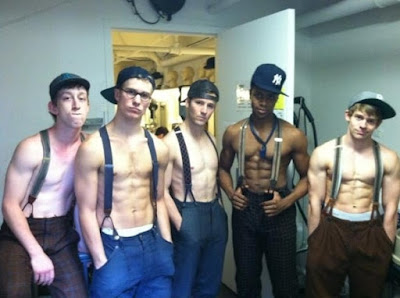 I don't know which one he is.  I hope they all show up in guest roles.

Ashleigh Murray, Irie Hayleau, and Ashanti Bromfield play Josie and the Pussycats, a pop group that never interacted with Archie in the comics. 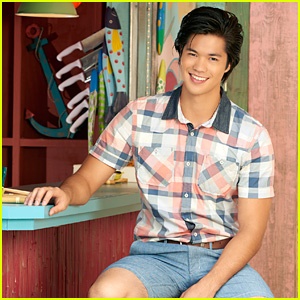 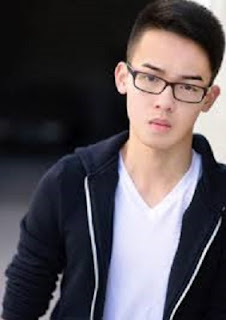 Looks like they're adding Asian representation.  But they've omitted the only black guy in the comics, aspiring cartoonist Chuck Clayton. 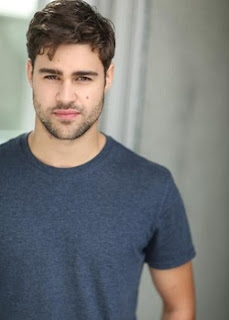 Most of the characters are in place, if tweaked a bit to add more drama.   But I'm wondering, would anyone notice the difference if we changed their names to Dawson, Joey, Jen, and Pacey, or Dylan, Brandon, Donna, and Kelly? 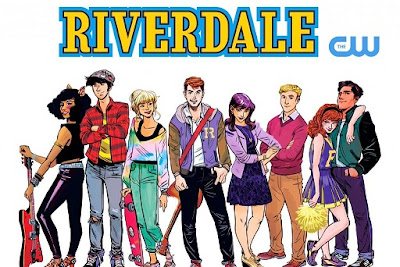 What makes this series about our Archie, Jughead, Betty, Veronica, Reggie, Moose, and Dilton, the amiable, fun-loving teens that we all grew up with?

Veronica and Betty are Going Steady

The very funny blog Archie Out of Context reproduces panels from Archie comic books that, out of context, look sexually explicit or homoerotic, or both. 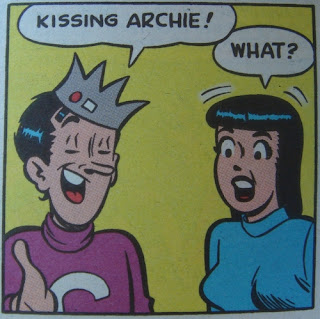 But you don't need to take panels out of context.  Long before Kevin Keller, the first openly gay student at Riverdale High, Archie comics  hinted about the existence of same-sex desire. 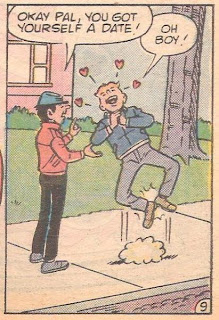 For instance, Betty finds a little black book in Betty’s Diary 34 (1990), believes it is a boy’s date book, and is surprised to find that her name is not in it. “There’s no accounting for tastes,” she muses. “I’m a much better date than Tom Cameron or Ron Cook.” This is a curious comment for an Archie strip, implying not only that sometimes boys date other boys, but that it is an everyday occurrence, of only minimal interest. A moment later, she realizes that it is actually Veronica’s book. But for a moment, it belonged to a boy who dated boys; for a moment, there were gay students at Riverdale High.

It's even easier to find explicit references to female same-sex desire. In “Girls Just Want to Have Fun” (2000), the boys abandon the girls for the basketball playoffs, so the girls plan a series of “all girl nights.” Afterwards, when the boys are available for dates again, they refuse, explaining that “We discovered how much fun it was to hang out with just the girls.” 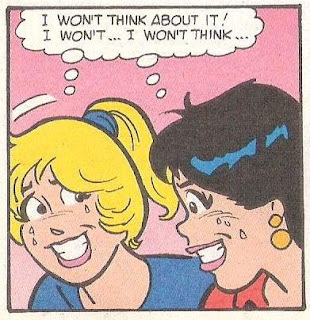 Veronica agrees to star with Betty in a stage version of Beauty and the Beast, not realizing that she is to play the Beast (Betty and Veronica Digest 94, 1998), but of course either way the girls would play lovers.

In Archie’s Double Digest 48 (1990), Veronica is livid: “Betty, you’re over an hour late for our date!” Teens in 1990 did not use “date” in reference to a non-romantic interaction.

Betty and Veronica are the archetypal butch-femme couple. Betty is an athletic and a “tomboy,” at ease in auto garages and workshops, frequently advised that her heterosexual loves is stymied because she is too much like “one of the guys.” Although obsessed with Archie and dating many boys, she rarely exhibits a giddiness about the male form. Indeed, she demonstrates a “guy’s” obsession with the feminine form. She spends her day at the beach exclaiming, “Look, Archie! Isn’t that a pretty girl? Doesn’t she have a gorgeous body?” (“Run for your life,” Archie's Digest 79, 1986).

Veronica is the debutante who luxuriates in bubble baths and wears Paris evening gowns to school. Although she is much more likely than Betty to go ape over the handsome new teacher, lifeguard, or medic, she often seems less interested in boys than in the social status that boys can provide, or as a means of competing with Betty. That is, she doesn’t necessarily want Archie to take her to the big dance; she merely wants to make sure that he doesn’t take Betty.

Indeed,  in “Ladies Man” (Laugh 1, 1974), Betty asks Veronica, “What do you find most attractive about Archie,” and she responds immediately “You!”

In “The Reject” (Archie and Me 55, 1988), Archie expresses his love for Veronica, who rejects him. Jughead sneers “You’re trying to get love out of Veronica? How about Betty?” Archie responds: “She’s not gonna get any more love out of Veronica than I do!”

The two are obviously inseparable, and many stories involve non-boy-related threats to their relationship. 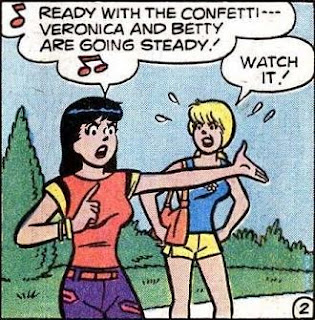 A postmodern twist in Betty and Veronica Double Digest 66 (1997) has the girls aware that they are comic book characters.

Veronica objects to their stories constantly being titled “Betty and Veronica”: she wants to be first. She argues that Betty would be better in last place, because so many words rhyme with Betty and they could therefore create poems. “Ready with the confetti!,” she recites, “Veronica and Betty are going steady!”


“. . .with Freddy and Teddy,” Veronica concludes, her look not one of embarrassment over the misunderstanding, but one of sophisticated smugness.  She is unfazed by the romantic  implication of her rhyme – it may even have been deliberate – and looks down on Betty for being so upset.

Betty wheezes “Whew!” She is drenched with sweat and near collapse.

While Veronica accepts and even invited the implication that they might be lovers, Betty is in a veritable panic. Understandably, since she is a stereotypic “dyke,” active, aggressive, athletic. All she has to do is acknowledge that her friendship with Veronica is romantic, and come out as lesbian or bisexual.

All that subtext, and I haven't even started on Jughead.