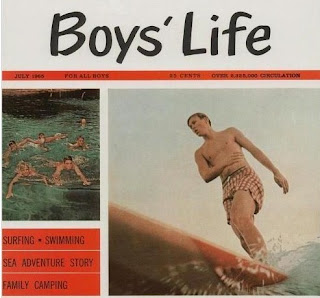 I lasted for about three weeks as a Cub Scout.  I didn't know about their anti-gay policies, of course, but I wasn't interested in building race cars, models of battleships, or bird houses.  It was like the agony of shop class, only with adults hovering around, insisting that I was having fun.

I didn't like the pledge, or the salute, or the song "God Bless America" that ended every session. 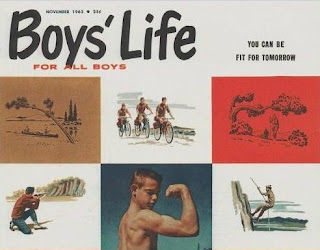 But I did like the scouting magazine, Boys' Life, which offered stories, games, and comics about boys bonding with each other, usually with no girls around.  Sometimes there were interesting bodybuilding tips, and even more interesting photos of bodybuilding teens. 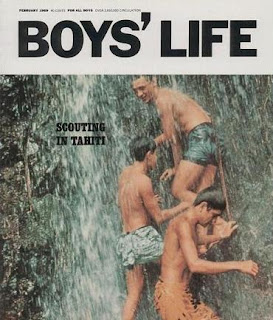 Or articles about scouting in exotic foreign locales.  Not as evocative as the My Village books, but still offering scattered glimpses of the "good place." 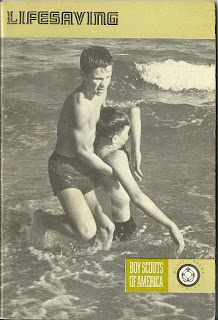 My grade school held a Scout Jamboree every spring, where you could get free copies of instructional manuals for merit badges.  There were dozens, covering everything from philately to rock-climbing, with genuinely valuable information.  And tons of beefcake photos, especially in the manuals for swimming, diving, rowing, physical fitness, and judo. 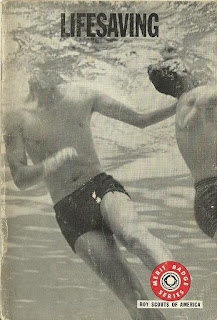 By the time I got to high school, I had three or four different editions of the lifesaving manual.  My parents found this odd, since I never took any lifesaving classes.
Posted by Boomer 6 comments:

Goes with Salami: The Art of Being Andrew Levitas In Psycho Beach Party (2000), Andrew Levitas plays a gay guy named Provoloney. But according to the DVD liner notes, this is impossible, since the hunky actor has been "melting female hearts" for years. Just female hearts. No gay guys exist. 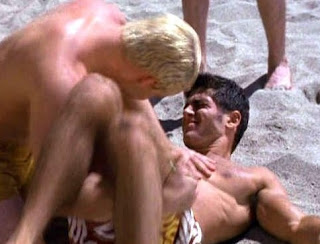 Entertainment journalists seem obsessed with pretending that no gay people exist, but they picked the wrong guy with Andrew Levitas.  The apparently heterosexual New York native has played gay characters several times, in the comedy In and Out (1997), the gay slasher Hellbent (2004), and Beauty Shop (2005). 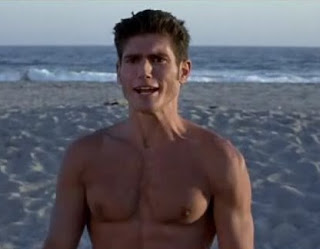 He has also been involved in writing and production, although his film The Art of Getting By (2011) was a traditional heterosexist "boy grows up through hetero-romance" story. 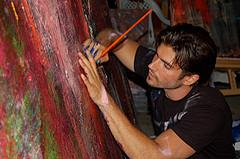 But his first love is art.  He specializes in avant-garde artforms such as "photographic sculptures" and "organic abstractions," which have gained him considerably acclaim in the art world.
Posted by Boomer No comments: 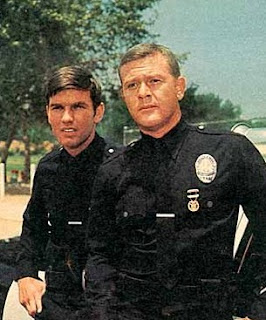 In 1975, Martin Milner (right) and Kent McCord (left), Officers Malloy and Reed on Adam-12 (1968-75) came to Rock Island to speak on the importance of staying in school. My friends and I were star-struck by the two celebrities, but we found their message somewhat square.

No wonder.  Adam-12 was the product of Jack Webb's Mark VII productions, kin to super-square Dragnet, so as the patrol cops cruised around Los Angeles, nabbing shoplifters, burglars, drug addicts, and various troubled kids, they preached a message of conformity: keeping your hair short, doing your homework, avoiding motorcycles, rock music, and the wrong crowd, and above all, finding the One.  The ongoing plot arc involved Officer Reed getting married and having a baby. 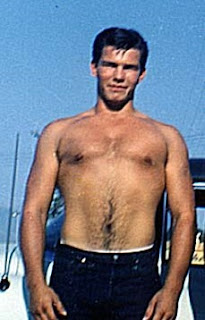 Beefcake was minimal.  This was not the L.A. of Chips; apparently there was no beach, and the cops were rarely off duty.  But Kent McCord (left) was cute, and there were a number of cute teen guest stars, including Barry Williams, Craig Hundley, Mark Harmon, and David Cassidy. 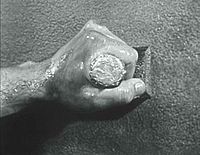 And it was always thrilling to see the closing clip of a beefy, sweating hand chiseling the Mark VII logo -- a glimpse of beefcake potential, like the opening of Mission: Impossible. 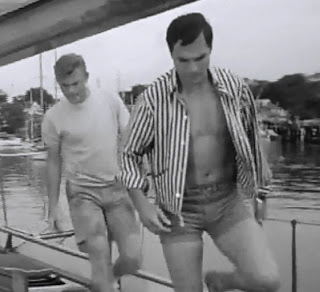 But there was ample gay-vague content. Martin Milner often imbued his characters with unstated homoerotic desire, as in the subtext-heavy (and   revealing swimsuit-heavy) Route 66.

His Officer Malloy was the seasoned cop who, at first, wasn't entirely happy at the prospect of being saddled with the rookie Reed.  But as they patroled the well-scrubbed, semi-mean streets of L.A., he developed an affection for the young officer that can easily be read as unstated desire. 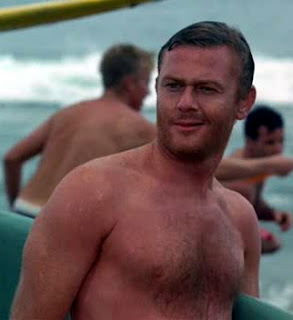 Malloy seems uncomfortable during the endless discussions of Reed's marriage, his wife's pregnancy, and various baby problems.  Is he recognizing the emptiness of his own single life?  Or is he jealous that Reed loves someone else? 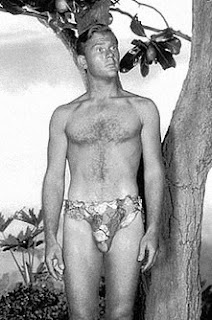 Malloy gets girlfriends of his own twice during the series, but is he actually interested in them, or is he trying to follow his own rule: don't make waves, conform, obey the Tripods?
Posted by Boomer 4 comments:


Even after my dreary experience with Modern Literature during a freshman course in Fiction Writing, I had to take courses in Modern American Literature and The Modern British Novel.  Both assigned works that were deadly dull, all about heterosexual courtship and marriage, with same-sex relationships, even friendships, absent (the same might be said for my upper-division French, Spanish, and German classes). 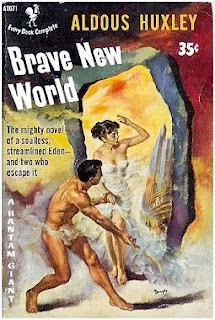 Sons and Lovers, by D. H. Lawrence (1913), is about a man attempting to choose between a farm girl, a feminist, and his mother, with no men in sight.

My professor claimed that, if civilization ever ended, we could reconstruct it with nothing more than Ulysses (1918), by James Joyce.  But such a world would be gay free.  The day in the life of Stephen Dedalus includes a visit to a prostitute and lots of descriptions of ladies, but only one mention gay people once, when Buck Mulligan warns Stephen Dedalus that the guy ogling nude statues at the British Museum might be a "sodomite."

In Aldous Huxley’s Brave New World (1931), sex is the chief recreation in a near-future dystopia, yet no one considers anything but straight sex.


One novel  did evoke same-sex practice, as a symbol of debauchery and moral decay, but so subtly that at the time I didn't even notice. 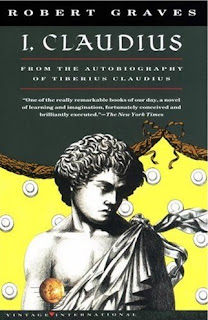 In I, Claudius (1934), Robert Graves assigns the decadent, insane Emperor Caligula a laundry-list of sexual practices, including bestiality and incest, but only hints at his interest in men, as if it is by far the most disgusting of the lot. (And it's not mentioned at all in the 1976 miniseries).


No wonder I stuck to the Victorians, where same-sex relationships were portrayed with depth and poignancy, if only in subtext.
Posted by Boomer No comments: 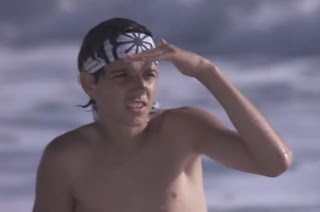 Although Ralph Macchio's earlier movies (Up the Academy, High Powder, The Outsiders) featured significant buddy bonding, The Karate Kid (1984) based its success on a demonstration of straightness.  The first scene is a tease: New Jersey transplant Daniel (Ralph) meets boy-next-door Freddy (Israel Juarbe), who looks embarrassingly love-struck and can't stop inviting Daniel to do things, first karate lessons and then a beach party. 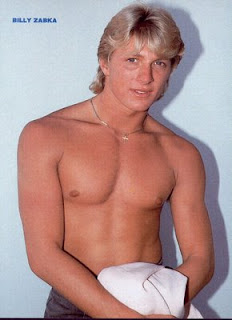 But just when we think this will be a teenage romance, the rich-kid bully who runs the town (William Zabka) forces Freddy to break up with Daniel, and he disappears until the final scene, where he is in the crowd of well-wishers at the big karate tournament.

The rest of the movie effectively eliminates moments that might mean something by depictng every teenage boy, without exception, as cruel, violent, vicious, and seething with unexplained anti-Daniel hate. Every word  boys say is a boast, an insult, or a threat.  They wear skeleton costumes to the Halloween party to demonstrate their evil, and their karate uniforms are black to contrast with Daniel's Luke Skywalker white.  In contrast, every girl Daniel encounters is an angel, nurturing, supportive, tolerant, and kind.  This is heterosexism run rampant, proof positive that same-sex love, friendship, or even polite co-existence is utterly impossible.  Love, friendship, and even the freedom to walk across the cafeteria without harassment can occur only in the company of girls. 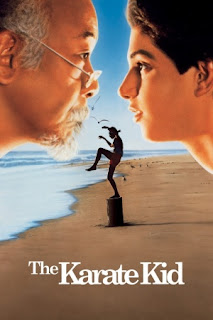 Sports underdogs are always tutored by outsiders who lack jobs and wives and are therefore sexually suspect, so Mr. Miyagi (Pat Morita), the apartment complex janitor who teaches Daniel karate, might have added a homoerotic subtext.  The two become best friends; Miyagi gives Daniel a birthday cake, and Daniel helps Miyagi into bed after a drinking binge.

The DVD box shows them face to face, mouth to mouth, gazing at each other as if moving in for a kiss.  But Miyagi is elderly and Asian, movie code for "asexual."  And, so no one worries that a stray look might mean something, Miyagi is shown drinking to the memory of his dead wife, thus "proving" that he is heterosexual.

After The Karate Kid, Ralph's baby face and soulful puppy-dog eyes allowed him to play teenagers well past his thirtieth birthday.

Usually he was thrown into worlds so heavily polarized into vicious boys and nice girls that same-sex intimacy seemed absurd.  In Karate Kid II (1986), both Daniel and Mr. Miyagi  both fight cruel, violent boys and get girls. 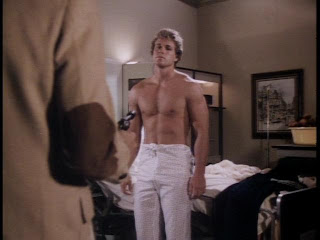 In Crossroads (1986), the guitar substitutes for karate, and an elderly black man for the elderly Asian man, but still, nothing but cruel, violent boys and kind, loving girls.

In Distant Thunder (1988), en route to a reunion with his elderly father, Ralph and a kind, loving girl are kidnapped by her cruel, violent boyfriend (Reb Brown).

Not until My Cousin Vinny (1992) did Ralph bond with a boy, a fellow college student waylaid by a murder charge in Alabama.  By that time, an entire genre of Ninja kids had evoked their own worlds of cruel, violent boys and kind, loving girls, rejecting the possibility of same-sex love over and over.
Posted by Boomer 5 comments: