Luke Cage was a Marvel comic book series that tried to cash in on the 1970s blacksploitation craze with a jive-talking, bell-bottom-wearing Harlem-based "hero for hire."  He didn't fly or have laser-vision; he was only marginally super-strong.  In fact, his only real superpower was being unbreakable: nothing could pierce his skin (which leads to all sorts of questions, but ok, Superman can reverse the Earth's rotation, so I'm not complaining).

Fast forward to 2016, when Luke Cage becomes the star of a Netflix tv series: after "the incident," a depressed, angst-ridden Luke Cage is keeping a low profile, working at Pop's Barber Shop in Harlem, hiding his superpowers from a hostile society and trying to stay out of trouble.  But when Pop is murdered, he is forced into action again.

There are ample gay subtexts.  No one in the cast seems involved in a heterosexual relationship, or expresses heterosexual interest, except for Luke himself and an occasional murdered cop who gets the standard "He had a wife!" homage.  Otherwise this is a homoerotic Harlem where men and women lead separate lives, coming together only when necessary to run organized crime gangs or try to bring those crime gangs down.

And, since almost the entire cast is black, there is an explosion of black beefcake, more than on any other tv series I have ever seen. 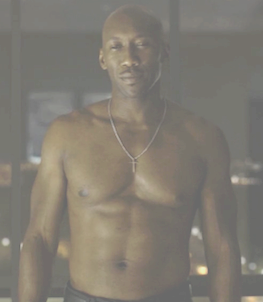 1. Mike Colter (top photo) as Luke Cage, Hero for Hire, although he isn't hired much.  After Pop dies and the barber shop closes, he is basically unemployed, spending his time being moody, getting shot at, and trying not to get involved with hetero-romance.

2. Mahershala Ali (left) as crime boss Cottonmouth Stokes, the owner of the Harlem Paradise nightclub.  He wanted to become a professional musician, but he was forced into the crime game by his aunt, Mama Mabel, who also forced him to kill his uncle. 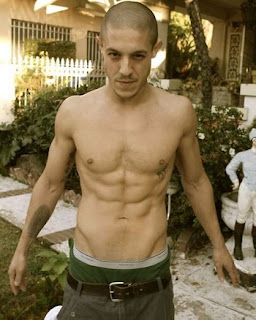 3.Theo Rossi as Shades Alvarez, a street thug who plays every side of the conflict. 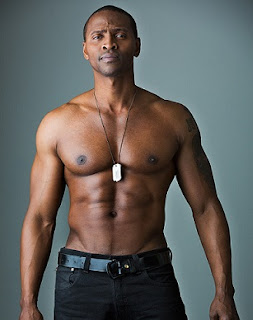 4. Erik LaRay Harvey as Diamondback (the gang members all have snake names).  He also happens to be Luke's half-brother, the guy who framed him and had him sent to the prison where he got his superpowers.  He carries a Bible with him at all times.

5. Jaiden Kaine (left) as Zip, the leader of Cottonmouth's gang. 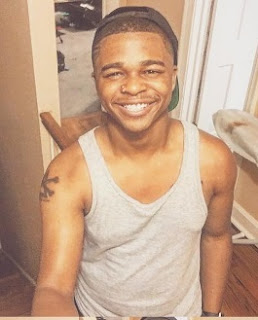 More after the break

Ernest Hemingway: Homophobic, Gay, or Both? 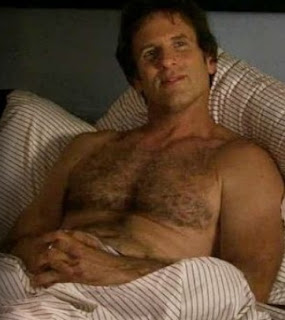 You had to read the stories of Ernest Hemingway (1899-1961) in school.  We all did. Teachers loved him, probably because he was a breath of fresh air, easy to teach in a semester otherwise devoted to the long, complex modernist stream-of consciousness self-important arcane claptrap that passed for Great Literature in the 1930s.

A rebel and an iconoclast, Hemingway wrote with a spare, journalistic, adjective-light, description-light pen that is still, today, promoted as what "good writing" is all about.
"I'll drink absinthe."
"Do you think I should?"
"Why don't you try it?  Didn't you ever?"
"No, I was saving it to drink with you."
"Don't make things up."
"It's not made up." 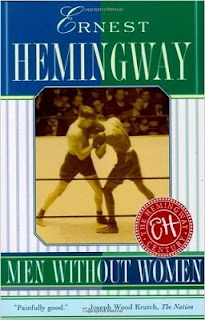 He wrote about a macho, men's world of hunting, bullfighting, deep-sea fishing, and war, men without women, or with women as intrusions and threats.

Eight novels, of which the most commonly read is The Sun Also Rises (1926): The angst-ridden Jake Barnes has been castrated in the War, and cannot...um...rise to the occasion.  The Post-World War I Lost Generation resonates with all teenagers everywhere.  They are always a Lost Generation.

It was filmed in 1956 and 1984, with Tyrone Power and Hart Bochner (top photo) playing Jake Barnes, and was transformed into an opera 2000..

Lots of short stories.  The most commonly read is "A Clean, Well-Lighted Place" (1933) about a depressed man drinking in a bar. 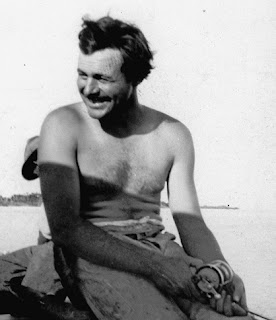 Ten nonfiction books.  The most commonly read is A Moveable Feast (1964), about Hemingway in Paris in the 1920s, hanging out with such gay luminaries as Gertrude Stein, Sherwood Anderson, Cole Porter, and James Baldwin.

Not to mention F. Scott Fitzgerald, who he took to the Louvre so they could compare the penises on ancient Greek statutes to their own. 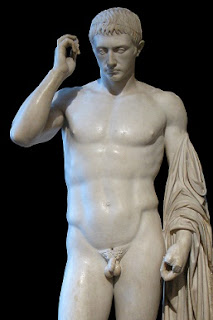 Um...well, looking at those, any guy would think himself huge..

With all that masculine energy going on, one might easily conclude that Hemingway was gay.

Except that his stories are full of homophobic asides, men swearing and sneering at sissies, trying to prove that they're adequately masculine -- that is, not gay -- by bedding women, picking fights, and trying to land enormous fish. 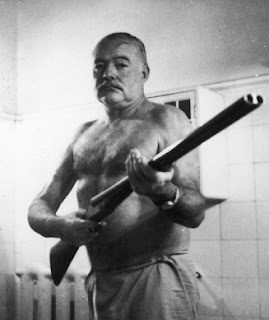 In his nonfiction and personal letters he was no less contemptuous: gays were "abnormal" and "pathetic."

Maybe he was working through his own issues with same-sex desire in the homophobic era before Stonewall.  After all, throughout his life, he preferred the company of men without women.

The Boys of Lassie 1: Jon Provost 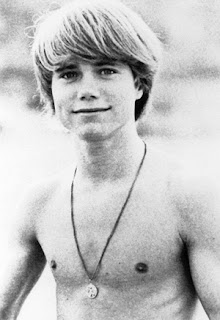 As a kid, I liked Flipper and Skippy the Bush Kangaroo, but I wouldn't be caught dead watching Lassie (1954-73).  The soppily sentimental theme song, the collie's maudlin whines, the heart-tugging plotlines, the nauseatingly cute boy-owners -- I thought it was fit only for grandmothers and little girls.  I'd rather watch something a little more macho, Voyage to the Bottom of the Sea, Land of the Giants, The Young Rebels, even Wild Kingdom if I had to.

But some gay boys liked the boy owners -- their cuteness, their lack of any perceptible interest in girls -- and, as they grew into adolescence, their hunkiness and the frequency with which they took off their shirts.  There were three of them, but the most famous was Jon Provost (born in 1950), whose Timmy lived with the dog from 1957 to 1964. 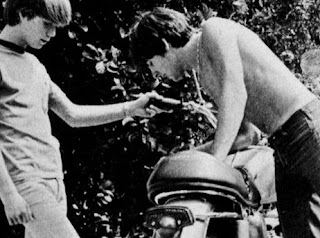 Timmy started out a blond kewpie doll, saying things like "golly-gee" to his adopted parents.  But he didn't stay a kewpie doll long.

When his stint on Lassie ended, Jon was 14 years old, well into his adolescence, and gay boys and heterosexual girls were starting to take notice.

He hung around with other teen idols, such as Davy Jones (left), Kurt Russell, and Kevin Schultz. No boyfriends, but according to his autobiography, Timmy's in the Well, gay buddy Sal Mineo once got a little too grabby during a three-way with his girlfriend. 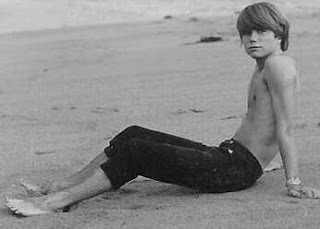 Jon tried his hand at singing, and starred in some movies:  This Property is Condemned (1966), The Secret of the Sacred Forest (1967), and The Computer Wore Tennis Shoes (1970), starring Kurt Russell. 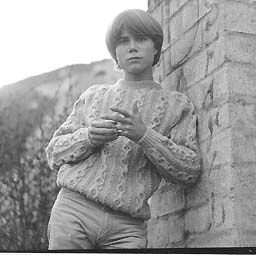 The teen magazines responded with swimsuit and extra-tight painted-on-slacks photos.

But he was too typecast as Timmy to get the full teen-hunk treatment, so Jon retired from acting, except for a recurring role on The Adventures of Lassie (1989-92). He got his degree in psychology, and settled down to a civilian career.  He still attends fan conventions, and is gracious to the boomers, both male and female, who had crushes on him as kids.