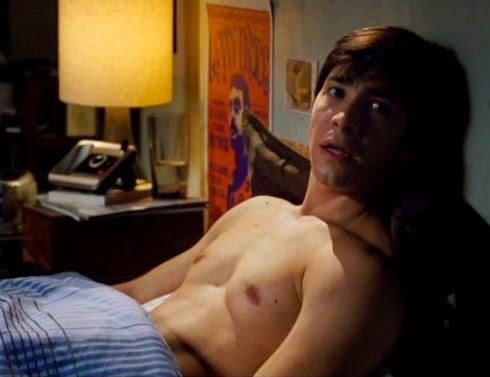 You have to be careful with mainstream Hollywood movies.  Reviews don't always warn you that they're homophobic.  That's why I usually stick to juveniles and sci-fi, set in worlds where gay people do not exist at all -- so no homophobia.

But I have a sure fire way to tell that a movie is homophobic: is Justin Long in it?

Ironically, the IMDB calls him "likeable," and he makes pro-gay statements.  But every movie I've seen him in has been overwhelming homophobic.

Jeepers Creepers (2001): the soon-to-be murdered teenager is driving with his sister.  They see a Gay Pride bumper sticker, and she quips "That one's for you," teasing him with implications of gayness.

Ok, maybe that one wasn't his fault. 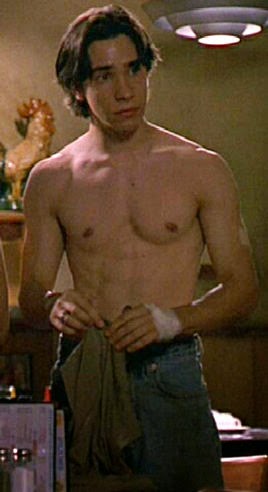 But then the homophobic movies came fast and furious.

Dodgeball: A True Underdog Story (2004): a group of misfits play the sadistic grade-school game in order to save or win something, while making endless "Aren't gay people gross?" jokes.

Accepted (2006): a high school slacker can't get into college, so he starts his own, while making endless "Aren't gay people gross?" jokes. 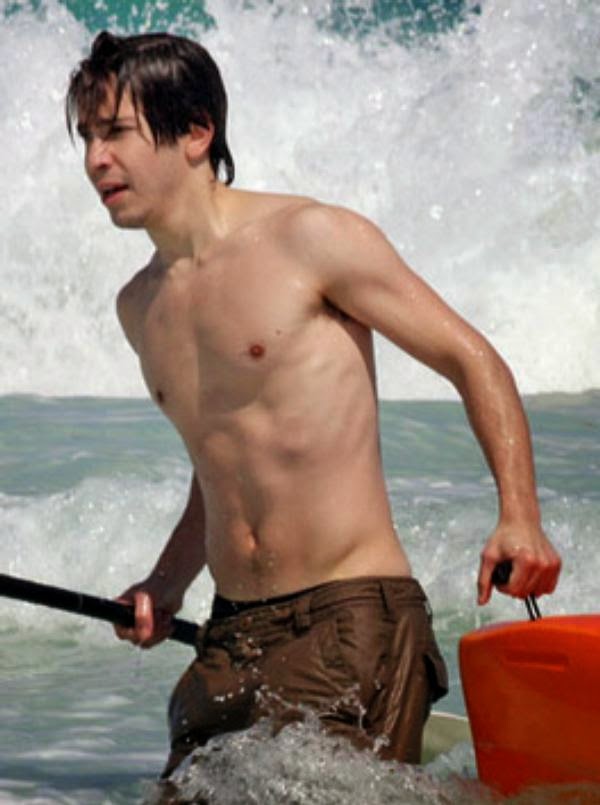 For a Good Time, Call (2012); Two women start a phone sex line. They have a gay-stereotyped best friend (Justin, naturally).

Surprisingly, after all the hatred and disgust spewing from his characters, Justin says that he has "respect" for gay people. 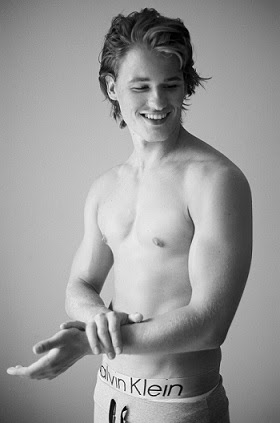 Speaking of retreads, Disney's True Jackson, VP was about a 15-year old girl who becomes the vice president of a quirky fashion company.  The Canadian series Some Assembly Required (2014-) goes one step farther: when a defective chemistry set destroys Jarvis Raines' house, he sues the toy company, and ends up owning it! 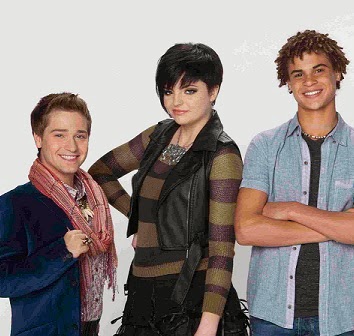 Jarvis (Kolton Stewart, right, previously the star of the dance drama The Next Step) has a lot of ideas for interesting toys, so he moves in, along with an eclectic group of employees from his school:

1. Piper (Charlie Storwick, a center), a computer whiz who has a crush on Jarvis. 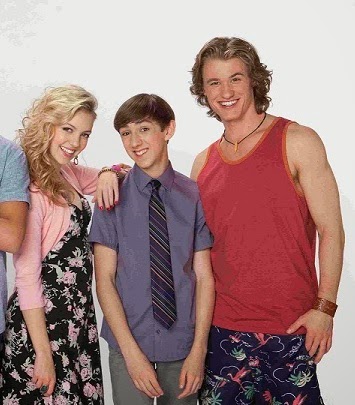 3, Geneva (Sydney Scotia), an it-girl hired to be Jarvis's  assistant.

The former owner, Candace (Ellie Harvey of The New Addams Family) sneaks in as cleaning lady "Mrs. Bupkis" to undermine the company. 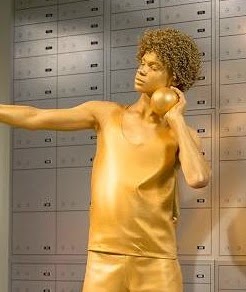 Heterosexual romance is in the air: Piper has a crush on Jarvis, and Knox has a crush on Candace. But there is also a nearly-gay character, and Jarvis can't seem to keep his eyes off Knox's muscles.

By the way, Dylan Playfair is the son of Jim Playfair, a former Canadian hockey star who is now an assistant coach for the Phoenix Coyotes.  Groomed for a career in hockey, Dylan played all through high school, but after suffering a concussion during a game, decided that he wanted to do something else with his life: act.

How did Dad respond to this less than macho career ambition?

He was surprisingly supportive. 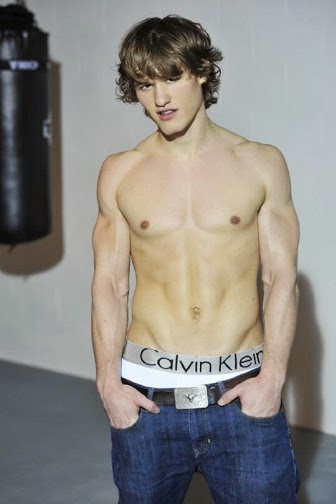 So Dylan attended Vancouver Acting School, did some modeling, and worked as a bartender while auditioning. Within a year, he was cast in Grave Encounters 2 (2012)

His character is introduced smoking marijuana.

Since 2012, Dylan has been very busy, playing three hockey players, a college student in a murder mystery, and a high school runner in a buddy-bonding movie.  In 2016, he starred in the tv series Haters Back Off.

He's gay-positive.  In 2012 he tweeted about gay marriage in the U.S.: "it's the Apocalypse for redneck, homophobic, racist, prohibitionist, religious extremist ignorants.  Everyone else is ok."

Jerry Mathers as the Beaver 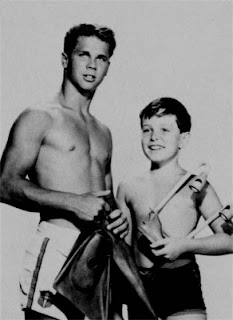 The anxiety for his big brother and parents (Ward and June) is that Beaver might not "discover" girls, abandon the same-sex bonds of childhood for a girl-crazy adolescence.

Gender transgressions are the most problematic, as in "Beaver's Doll Buggy" (1956): Beaver needs some wheels for his soapbox car, and a girl donates her old doll buggy.  As he wheels it down the street, everyone assumes that he is playing with dolls. His peers laugh, and an adult recoils in homophobic panic: "The new generation has gone sissy!"  Eddie Hasell is too stunned to wisecrack, and Wally solemnly advises, "Guys always pick on someone who's different." 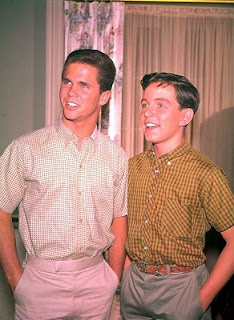 In "The Mustache" (1963), June is perplexed because Beaver and his buddy Gilbert (Stephen Talbot) failed to go to the high school to watch Wally's basketball practice.  (She assumes without question that they would be interested in ogling high school boys).  Beaver says that they decided not to go when they realized that girls would be watching, too.

Alarmed, June asks: "You mean you and Gilbert don't like girls?" Realizing that to not like girls at his age would be suspect, Beaver quickly backtracks: "We like girls fine, but not with sports." 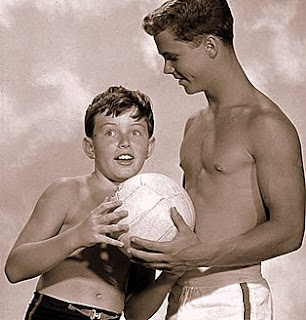 "Don Juan Beaver" (1963) is a masterpiece of feigned girl-craziness.  With everyone agog over the upcoming Sadie Hawkins Dance, Beaver claims enthusiastic interest, and accepts invitations from two girls.  They discover his two-timing and dump him, leaving him alone in his room, dateless, on the night of the big dance.

We see him happily dancing the twist by himself.  Then he hears Ward coming, so he quickly switches the record player off and sits on the bed, looking dejected. Ward invites him downstairs to be with the family, but Beaver refuses, saying he would rather be alone.  Ward leaves, and Beaver jumps up and starts dancing again, grinning broadly.

It is a remarkable scene.  Why is Beaver so obviously happy?  Why does he want Ward to believe that he is miserable?  The deception makes no sense unless Beaver has cleverly achieved what he wanted all along: he has met the social mandate to display girl-craziness without having to actually date a girl. 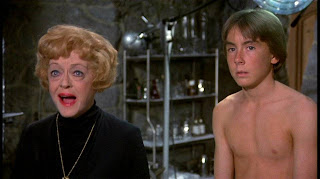 Ike Eisenmann has had a long career in acting, production, and voice work, but for gay boys growing up in the 1970s, he was famous for this scene:


Before 1978, he was a child actor, cute if a bit scruffy, doing guest roles on tv (Mannix, Gunsmoke, SWAT) and in tv-movies requiring country boys with Texas accents, mostly airing on After-School Specials.  He didn't quite make it as a Disney Adventure Boy, like Jeff East or Kurt Russell, but he appeared in a few Disney movies.

In Escape to Witch Mountain (1975), the 12 year old played Tony,  a gay-coded "kid with a secret"; he and his sister Tia (Kim Darby) are aliens.  Of the magical power variety: Tony is telekinetic, and Tia can open locked doors (useful if you've lost your key, or if you've been kidnapped).  They are trying to reach Witch Mountain to reunite with their people while an evil industrialist tries to capture them to make money from their powers. 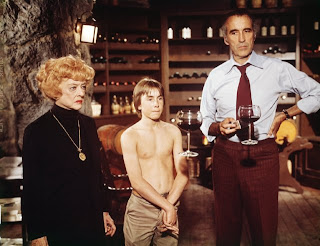 Then came the sequel, Return from Witch Mountan (1978), with scenery-chomping Bette Davis as a new evil industrialist.  Except Tony is now 15, well into adolescence, and his lack of interest in girls is striking in an era of incessant teenage girl-craziness.  And if the gay-coding isn't enough, there is an extensive scene in which the shirtless, hypnotized Tony stands around with his small but firm muscles on display.  During the 1970s, shirtless shots were almost unheard of in Disney movies, but here it was, plain as day, for a good five minutes, with no plot justification whatsoever.

In the era before DVDs, some gay boys saw the movie five or six times, just so they could memorize that scene.


Ike has continued to act and do voice work. He had a memorable role as a racist teen who has a change of heart (and wore extra-tight jeans) on The Jeffersons (watch the complete episode here).   In 2009 he wrote and directed a tv series called The Chefsters, about people with names like Scrub B. Pots and Chefona Kitchens teaching proper nutrition.  But gay men who were children in the 1970s will always remember that bright spring day in March 1978.
Posted by Boomer 8 comments: